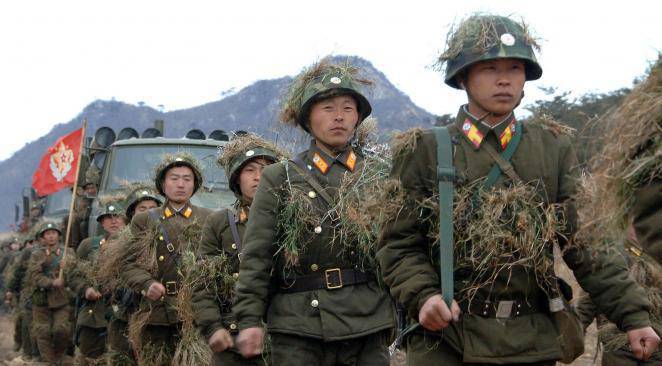 Some conspiracy-obsessed intelligence officials believe that North Korea’s behavior is only intended to justify the American presence in Asia. Which is essentially against China.


At the end of March, the “eternal” Pyongyang dictator Kim Jong-un threatened South Korea and the United States with nuclear strikes. Thus, the scenario of the Third World War or a regional cataclysm can no longer be completely cast aside, even if the aggressive (and often quite predictable) behavior of the North Korean regime is aimed primarily at gaining certain advantages (cancellation of sanctions, food and financial assistance, etc.) d.) Be that as it may, conspiracy theories have now come into vogue in networks and some intelligence services that behind the showy irrationality of Pyongyang, there is actually an “objective alliance” between totalitarian North Korea, on the one hand, and the United States and South Korea, on the other. .

From this hypothesis it follows that the threat from Pyongyang (since 1948 has been consistently supported by China) justifies the US military presence in the region and is not so contrary to the interests of South Korea: the presence of American bases allows Seoul to reduce the consistently high military spending. Yes, in the South, no doubt, they would sincerely like to overthrow the communist regime in the North, but it can also mark a serious economic loss. The fact is that the fall of the existing government in Pyongyang with the subsequent unification of the country would cost Seoul in the amount of 500 billions to 3 trillions of dollars, and also seriously slow down the economic growth of the South Korean dragon and affect the competitiveness of its enterprises.

Japan, too, is afraid of the North Korean enemy, who often threatened her with war, but at the same time fears the unification of the two Koreas: a similar scenario would double the geostrategic power of its main economic rival, whose products (and it is now bypassing the Japanese in many markets) would become even more competitive due to the low labor costs of the poor inhabitants of the North. With this development, Goldman Sachs puts South Korea in eighth place (ahead of Germany and Japan) in the ranking of the world's largest economies by 2050 year. In addition, as a result of the merger of the two Koreas, the new state would become the owner of an atomic weaponsthat would force Japan to start producing a costly nuclear arsenal (Tokyo is absolutely not eager to do this because of the economic crisis and the gradual abandonment of the peaceful atom after the Fukushima accident).

Thus, some cynically-minded experts argue that the United States for a number of years turned a blind eye to North Korea, helped it create the atomic industry, and even allowed (unlike Iraq) to get hold of nuclear weapons. In their opinion, Pyongyang serves as a “useful enemy” for Washington, a threat that is a pretext for the American military presence in the south of China ... The task of such an “Asian belt” is not only to counter the North Korean threat (real danger, but at the same time time and pretext for the preservation of American bases), but also surrounded by the present geo-strategic enemy of the United States - China, which enters, together with Russia, into the Shanghai Cooperation Organization (SCO is an alliance against the American hegemony of the former Soviet Republics and China).

Hence the crazy theory of certain young circles about the fact that the young North Korean dictator, who was brought up in Switzerland for a long time and was noted by the North American intelligence services, is actually dancing to the whistle of his own regime's enemies ... of course, this hypothesis contradicts the current one the key task of Washington and its local allies, who are trying to convince Beijing to put pressure on Pyongyang so that the totalitarian regime abandons its nuclear strategy to create tension. Officially, in Washington, they would like to replace the existing North Korean regime with a more reasonable government, which would still remain pro-Chinese and dictatorial, but at least was ready to abandon plans for nuclear weapons in exchange for economic assistance and the lifting of international sanctions.

Nevertheless, American strategists are well aware that such an option would bring double benefit to Beijing: would avoid a world war involving China, Korea and the United States (where the axis of China - North Korea would have awaited an inevitable defeat), and also undermined the moral and strategic the rationale for the US military presence in the region ... Chinese strategists and government officials are considering a similar scenario, but Pyongyang is not too happy (Beijing is getting harder to keep it under control), and moreover Washington who He would have lost the confirmation of the legitimacy of his military presence on the Korean Peninsula.

On the one hand, China is interested in further protecting the North Korean ally, whom he can put serious pressure on, since Pyongyang is unable to live without barter and the help of Beijing. Even though this may seem quite incredible, the last threats to Pyongyang appeared a few weeks ago in the press. Beijing understands that the more the North Korean regime shakes its fists in front of the allies of Washington, the more it justifies the US presence and the military expansion of Japan and South Korea. And this is contrary to the strategic interests of China, which seeks to oust American forces from Asia. Beijing regards Pyongyang as a pawn in a strategic game and, despite external discontent with an uncomfortable partner, has consistently opposed really tough international sanctions that could lead to the fall of the regime in Pyongyang. China has never sought and was not interested in breaking relations with North Korea, which gives it its ports and thus provides a trade advantage over its Japanese and South Korean competitors.

In strategic terms, North Korea has become for Beijing something of a pro-Chinese outpost on the southeastern border, where there are military allies of the United States, like South Korea (there are American soldiers and marines stationed there 30 000) and neighboring Japan. In addition, an ally in Pyongyang provides Beijing with an opportunity to “shift” responsibility for the military situation in East Asia and focus on Taiwan, which is another important stumbling block in relations between the US and China. Be that as it may, today the Peking regime is primarily interested in undermining the legitimacy of America’s military presence, which, paradoxically, is provided by its uncontrolled North Korean ally ...

All this suggests the supporters of the most cynical theories that the preservation of the status quo existing for many years in this troubled part of East Asia is not so undesirable for all parties and may even be beneficial for US interests in the region (of course, that the North Korean threats will remain just words) - just as Iran’s threats against Israel and its nuclear program justify the existence of American bases in the Persian Gulf ... Anyway, you shouldn’t believe this blindly.

Alexander del Walle is a recognized geopolitician, a lecturer in international relations at the University of Metz and an employee of the newspaper France Soir.