The US Army has become too expensive. 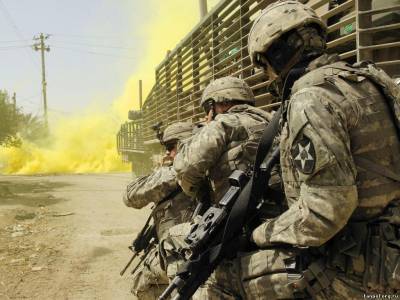 The financial crisis can significantly affect US military construction. Oceans protect the United States from external invasion, but they also create the problem of distance. Most of the potential theater engines for the US Armed Forces are in Asia today, that is, on the opposite side of the globe relative to the States themselves. Accordingly, the transfer and deployment of large groups of troops takes a long time and requires very serious costs.

In the workhorse of the USAF C-130, you can put one helicopter, heavy ground equipment, he can not carry. Bridges, ACS and MLRS do not fit into any transport aircraft at all. The number of heavy transport aircraft in the US Air Force is very limited (C-5, for example, a little more than 80). To this is added the problem of the capacity of airfields in a remote theater of operations, the ability to provide rapid unloading of aircraft, ensuring the safety of airfields from enemy strikes from the ground and from the air. As a result, it turns out that it is more profitable to carry out the transfer of heavy ground-based connections by sea, which is several times cheaper than by air, and in time - almost as much.
The speed of maritime transport over the past 100 years has not changed, it does not exceed 40 km / h, however, the carrying capacity of ships is incomparably greater than that of aircraft. In any case, however, the process of transferring just one division from America to Asia takes at least a month.

In the conditions of modern war, such a pace is completely unacceptable, therefore, recently in the USA they began to create land units of a new type — the Stryker Brigade. Such a brigade has 3,6 thousand personnel, 308 Stryker combat vehicles and towed howitzers 12. Its transfer from the continental United States to any region of the world and its full deployment takes only four days, since the Stryker combat vehicle is a regular armored personnel carrier, you can stuff 4 — 5 units into the plane.

Such a brigade possesses high tactical mobility, that is, it rapidly moves under its own power on the battlefield and on the approaches to it (wheeled vehicles, which include Straykers, much faster than tracked ones - Abrams and Bradley). There is only one flaw in it - the brigade is not able to fight on its own against at least some serious opponent, since it has a purely symbolic air defense, and its equipment is vulnerable to any anti-tank weapons.

Stryker can conduct hostilities only with the overwhelming superiority of its air force in the air and with the substantial support of the components of heavy compounds from the ground. However, in this case, the meaning of the strategic mobility of such brigades is lost, since, in order to be able to fight, they must wait for the transfer of heavy units, which, as already mentioned, cannot be done in four days.

Thus, if the United States confronts an adversary with powerful, if not very high-tech, armed forces that, like Iraq Hussein and Yugoslavia Milosevic, are not ready, they will be fascinated by the Americans for months to deploy and deploy troops for an operation against him. actively resist the movement and deployment, striking ports and unloading airfields, locations of incompletely deployed groups, and will even deploy its own ground attack at the moment when ruppirovka US Armed Forces will be weak in the US Army may have very serious problems.

Another problem of the American army is trivially painful: what weapon the harder and the better, the more expensive it is. The concept of the “network-centric war” implies the unification into a single network of all the “battle platforms”, that is, good old tanks, infantry fighting vehicles, airplanes, helicopters, ships. In this case, the effectiveness of the actions of the “platforms” does not even increase significantly, but by orders of magnitude. But what to do if there are no “platforms” themselves? Computers after all you will not fight.

Since the beginning of 90, the United States has not bought a single tank for its ground forces, having written off more than 10 thousands. The average age of aircraft has exceeded 20 years. The main air combat fighter F-15 almost fully developed its resource. It is impossible to upgrade infinitely and F-16, the more this machine initially has limited capabilities in terms of the fight against modern fighters.

Four years ago, the Americans began to purchase the fifth-generation fighter F-22, but the planned volume of purchases is only 183 machines (it has already been completed on 2 / 3). This plane is too expensive. And this makes the entire F-22 program pretty much useless. If a country plans to wage a normal war with a strong adversary, a fighter in such a war will be a consumable item. So it was in all the wars where opponents of comparable strength fought. If the fighter turns into a treasure, the death of which becomes a national catastrophe, then the war cannot be waged.

That is, it can be conducted against a country an order of magnitude weaker. And with a relatively equal - is impossible. It may be recalled that initially the Advanced Tactical Fighter program, from which F-22 was born, implied the purchase of 750 machines, as a result, it was reduced by more than 4 times. However, B-2 strategic bombers were originally supposed to buy 132, and bought 21. All for the same reason - because of the exorbitant price.

A similar situation exists in the US Navy. The Sivulf-type submarine construction program has been reduced from 29 to three, Zamvold-type destroyers - from 32 to two. I would like to remind you that during the World Wars, destroyers, like fighters, were always consumables, and now they have become a “treasure”. For the same reason, the prohibitive costliness of dying before the birth of the new generation CG (X) cruisers construction program dies. And what is quite funny, in fact, canceled the program for the construction of 55 warships of the coastal zone LCS, small and seemingly obviously cheap. And they somehow became very unnoticeably expensive.

Finally, it is impossible not to mention such a problem as the principle of manning the aircraft. If the army of a highly developed democratic country is recruited by hiring, then the war of high intensity, implying significant personal losses, is possible only if the society fully accepts this war as fair and meets national interests. Otherwise, the army is rapidly lumpenizing, while, nevertheless, the cost of maintaining personnel increases significantly (because even the lumpen go to serve only for a VERY big money).

In the context of the global financial crisis, the need to reduce military spending becomes obvious to the United States. That in turn will mean a decrease in global ambitions or a fundamental change in the way they are implemented. At a minimum, America will have to admit that there are quite a few countries in the world on which it cannot put pressure.

At the same time, however, one can never rule out the possibility of technological breakthroughs that in any way will allow the US military to fight with little or no loss against any adversary. In America, huge amounts of money are invested in new technologies of warfare, which may well have the desired effect. Whether Barack Obama will save on this, or, conversely, will redistribute funds in favor of the development of promising technologies - this is probably the main question.