"Calibers" and "Shtili" for the frigates of the project 11356M

April 10 2013
77
In the very near future, the Russian fleet will replenish with 3 new multi-purpose frigates of the far sea zone. Yantar Shipyard is engaged in the construction of a series of 3 frigates of project 11356R / M, which are designed for the Black Sea fleet Of Russia. These frigates are built on the basis of frigates of the Talwar type, which Russia supplies to India for export. In total, India has already received 5 frigates of this type, another 1 ship will be transferred to the Indian Navy this year. These ships are well mastered by industry and will help update the Russian fleet in anticipation of fine-tuning the frigates of project 22350.


The ships of the 11356M project - frigates “Admiral Grigorovich”, “Admiral Essen” and “Admiral Makarov” are planned to be incorporated into the Black Sea Fleet of Russia in 2014 year. In this case, the series has already been extended to 6 ships. It is reported that, under certain circumstances, it can be increased to 9-12 ships. New frigates inherited the best qualities of their predecessors. At the same time, they have qualitatively new weapons and electronic stuffing. The main armament of these frigates became the Caliber anti-ship missiles and the Shtil-1 anti-aircraft missile system.

The basis of the strike weapons of the new Russian frigates will be the Caliber-NK missile system, which is designed to defeat various classes and types of surface ships and submarines of the enemy, land stationary targets, and limited mobile targets with a previously known location under active fire and electronic countermeasures. This system on the frigates of the project 11356M consists of 8-mi self-guided high-explosive missiles. Anti-ship cruise missiles 3М-54ТЭ (with low-flying supersonic combat stage) and 3М-54ТЭ1 have a firing range from 10 to 220 and 300 km. accordingly (we are talking about the export version, there are no exact characteristics of the Russian versions of the missiles, but they are higher). The mass of the warhead is 200 and 400 kg, respectively, the maximum speed of flight to 700 m / s. 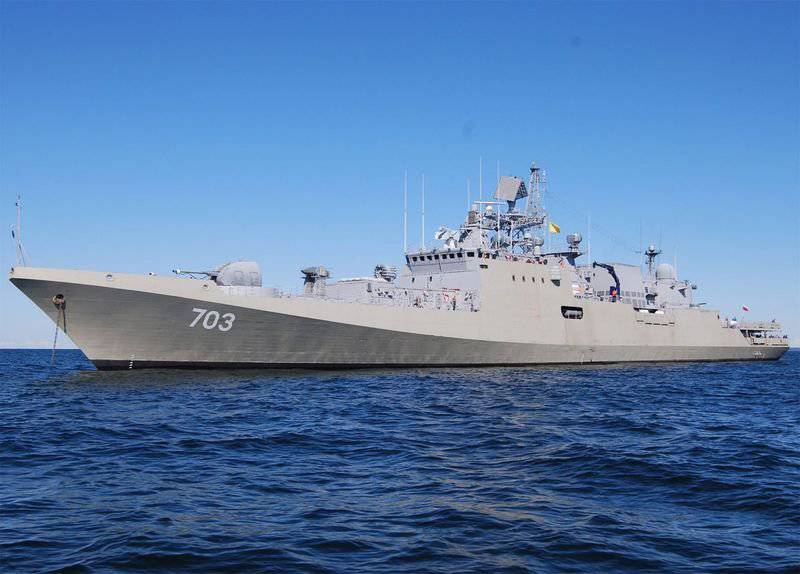 Frigate project 11356M
The formation and input of the flight task, as well as the pre-launch preparation, are carried out by a universal fire control system. Currently, foreign direct analogues to the Caliber-NK missiles simply do not exist. This complex was created in the Novator Design Bureau (Yekaterinburg). For Russia, this is the first launcher of a vertical missile launch. Due to the vertical launch of the missile complex Caliber-NK is located in the bow below the deck of the ship. Such placement is more compact and provides the least vulnerability to enemy attacks. Among other things, this installation can provide storage and launch of 3 types of anti-ship missiles, including Onyx anti-ship missiles and long-range cruise missiles.

The 3М-54Э and 3М-54Э-1 missiles ensure confident defeat of single and group naval targets (such as cruiser, destroyer, rocket boat, transport, landing craft) in the conditions of active electronic countermeasures. These missiles are equipped with a warhead, which produces an undermining at the optimum penetration depth. Combat use of these missiles is possible at any time of the year and day, on any part of the World Ocean, practically in any meteorological conditions.

The flight of a cruise missile is on the route laid down in advance in accordance with the intelligence information on the availability of air defense systems and the position of the target. The missiles are able to overcome the zone of a sufficiently developed air defense, which is ensured by the autonomy of targeting in the “silence” mode on the main leg of the flight and extremely low altitude. The rocket is navigated along a fairly complex trajectory of motion, it is possible to use predetermined reference points before 15, the rocket is able to approach the target from a given direction, bypassing the air defense systems and islands. ARGSN was created for the 3M54E rocket in the Radar-MMS design bureau - an active radar homing head, which in the year 2000 received the official name ARGS-54. This homing head has a maximum target range of 60 km. The length of ARGS-54 is 70 cm., Diameter 42 cm, weight - 40 kg. The active homing head has high noise immunity and can be effectively used at sea state up to 5-6 points. 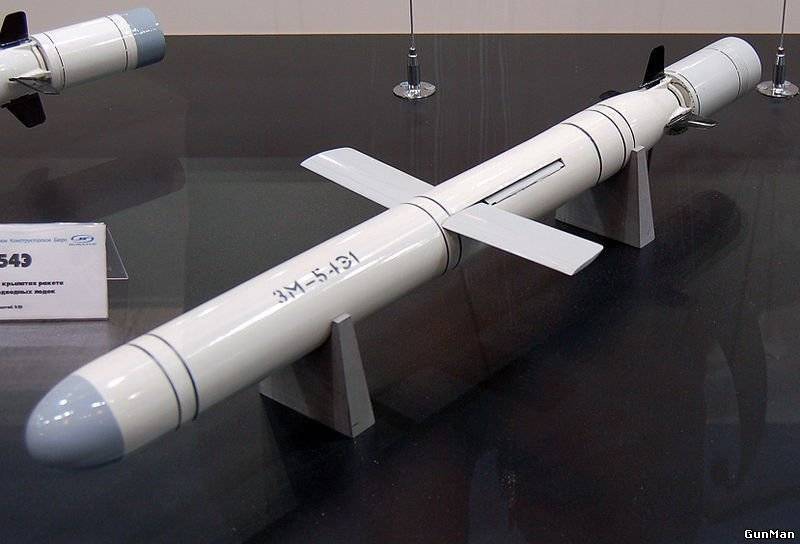 3M-54E-1 rocket mockup
The anti-ship cruise missile 3М54Е consists of a starting stage, a subsonic winged low-flying sustainer stage, and a low-flying supersonic rocket stage with a solid-propellant rocket engine. The first stage of the rocket is used to exit the rocket from the launcher and its acceleration. After that, the starting stage is separated and the main engine starts, the plumage and wing open, the rocket drops to a height of 10-15 meters and flies to the target using information from the onboard inertial control system. The second - the march stage - ensures the flight of a rocket in the main segment of the trajectory, bringing the rocket to the target area. At this time, the search and seizure of the target by the active homing head is carried out, after which the third one - the combat stage of the rocket - is separated. It serves to overcome the enemy's air defense system at supersonic speeds.

SAM "Shtil-1" is a sea-based multichannel complex with vertical missile launch. This shipborne air defense system is designed to organize the all-round defense of a combat ship from all possible air attack weapons, including repelling massed aviation attacks and missile strikes, as well as strikes against surface and ground targets. For firing "Shtil-1" uses data from the ship's radar all-round. The complex provides omnidirectional defense of a carrier ship or a connection of ships from massive attacks of modern anti-ship and anti-radar missiles, strike aircraft.

The “Smooth-1” air defense missile system is a combination of a fire control system, missile launchers and a three-coordinate radar of a ship. Each complex can include from 1 to 3 combat modules (from 12 to 36 missiles). The modular launcher is an 12 transport-launch container (TLC) with missiles ready for launch, a hydraulic unit and an electronic equipment unit. The number of modules depends on the size of the combat ship. On the frigates of the project 11356М it is planned to install 3-x combat modules on 36 SAM. 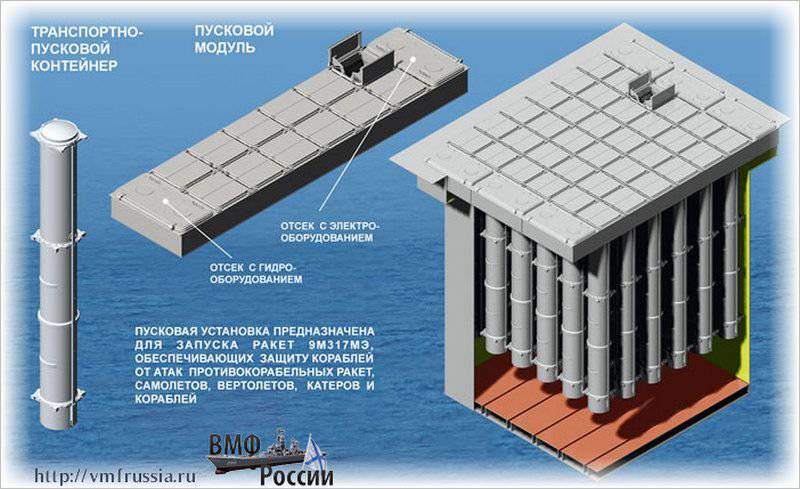 The omnidirectional multichannel shipboard medium-range air defense missile system, “Calm-1”, can hit all the main air attack weapons at altitudes from 5 m to 15 km. at a distance of 50 km. The launchers of the complex can be installed both in the bow and stern of surface ships, the displacement of which exceeds 1500 tons. This anti-aircraft complex, depending on the configuration, is able to conduct simultaneous firing from 2 to 12 air targets.

The Shtil-1 SAM system was created by the Altair Moscow Research Institute of Radio Electronics and is a further development of the Uragan M-22 complex. The 9M317МЭ SAM, which is part of this complex, was developed by the Dolgoprudny Scientific-Production Enterprise (DNPP), this rocket is unified with the 9М317Е SAM, which is used in the land Buk-М2 system. For the first time, this air defense system was presented at the international exhibition Defexpo India in 2004. A distinctive feature of the air defense missile system is the use of missiles with a decked vertical start, the use of control computing tools with an open architecture, branched software and mathematical software, the use of multifunctional radar with phased antenna arrays.

In this case, the air defense complex “Shtil-1” is the system that is able to control the attached fire weapons and successfully accomplish the tasks of the air defense of a warship or connecting ships in general. The “Shtil-1” air defense missile system can be fairly easily integrated into the local, regional or federal air defense systems of a higher hierarchical level, as well as introduce other complexes into their structure to coordinate their actions during the development of shipboard air defense systems.
Single-stage, solid propellant rocket 9М317МЭ is located in TPK MS-487. The rocket is launched by an ejection method - the powder catapult throws the rocket to the height of 10 meters above the deck of the ship, where it makes a turn on the target, after which the rocket propulsion engines are launched. This solution allows to provide a circular defense of the ship (the shelling sector is equal to 360 degrees), and also to bring the rate of fire of the complex to 30 launches per minute, immediately after the departure of the first rocket, the second can be launched.

ZUR 9M317МЭ in TPK
The main difference of the 9М317МЭ anti-aircraft guided missile from its ground-based counterpart is significantly reduced wings, folding aerodynamic control wheels and the presence of a special gas rudder unit, which is located on the nozzle block of the sustainer solid-fuel engine. This unit is responsible for the automatic deviation of the rocket in the direction of the target after launch. Zour has a dual-mode main engine, which allows it to reach speeds up to 1550 m / s, the maximum range of the rocket - 50 km.

This rocket provides for the possibility of using an inertial-corrected control system, with a new semi-active Doppler radar homing head (GOS). The on-board equipment of the anti-aircraft missile is built on a fundamentally new element base and has broad functions of adapting to the working conditions, which ensures the maximum probability of hitting targets under conditions of strong radar counter-resistance from the enemy. The missile defense system is equipped with a high-explosive fragmentation warhead weighing 62 kg. The rocket is equipped with contact and non-contact fuses. In TPK without carrying out routine work the rocket can be stored for up to 15 years.

Ctrl Enter
Noticed a mistake Highlight text and press. Ctrl + Enter
We are
Coastal Warships: Modern ApproachThe best frigates of our time
77 comments
Information
Dear reader, to leave comments on the publication, you must to register.