April 10 2013
73
The MiG-1980 fighter jets acquired as early as the end of the 1990s and the beginning of the 29s will continue to serve in the Indian Air Force at least until the end of the next decade. India has begun to modernize Soviet fighters under the MiG-29UPG program. The main objective of this modification is to bring the fighters to the level of capabilities of the MiG-29K and MiG-29KUB, which are currently being supplied for the needs of the Indian Navy. The basic modifications of the MiG-29 fighter are intended only to achieve superiority in the air, while the upgraded MiG-29UPG will be able to attack ground objects and ships, both stationary and in motion, at any time of the day or night regardless of weather conditions .


MiG-29 front-line fighters have been in service with the Indian Air Force since the 1987 year. In total, India received from the USSR and Russia 80 fighters of this type. This includes 70 single-seat MiG-29B and 10 twin-training MiG-29UB fighters. The delivery of the first batch of 44 aircraft began in the 1987 year, the second batch of 26 fighters was delivered in the 1989 year, the third batch - another 10 machine - delivered in the 1994 year. Fighters of this type serve in the 3 squadrons of the Indian Air Force: from December 1987 - in 28 and 47, and since November 1989 - in 223. Since then, as a result of accidents and flight accidents, 11 aircraft were lost (it is known that the 4 fighter was lost in disasters, another 7 in accidents). All in service with the Indian Air Force remains 69 aircraft of this type.

Negotiations on the supply of the latest at that time fighter MiG-29 for the Indian Air Force began in the middle of the 80-ies of the last century. In the 1986-1995 years, India acquired a total of 80 aircraft of this type. This deal was supposed to balance Pakistan’s purchase of American F-16A fighter jets. Then the Indian military attached great importance to this purchase. 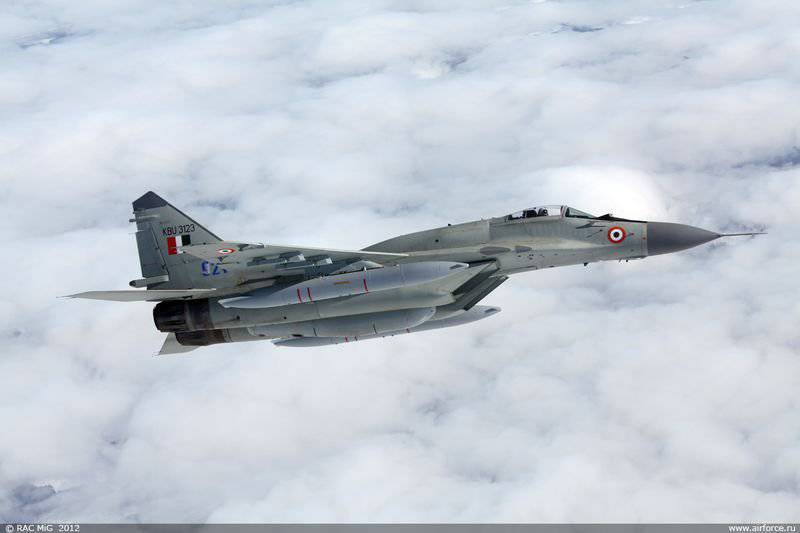 But at the end of the 1990-s, the MiG-29 was in the shadow of an ambitious program for the delivery of Su-30 fighter jets. Today, these heavy, multi-purpose vehicles form the basis of the power of the Indian Air Force. Despite this, the MiG-29 continue to carry out their military service in the Indian sky. At the same time, the contract for the purchase of the deck version of the MiG-29K for the Indian Navy gave impetus to the modernization program of the existing ground-based fighters. By this time, the number of MiG-29 fighters had already decreased. The remaining fighters were decided to upgrade.

A number of experts questioned the feasibility of a program to upgrade the MiG-29, pointing to plans to supply Rafale fighter jets to India 126. But the predicted difficulties that will arise during the development of the licensed assembly of these fighters and its initial use, force the Indian military leadership to focus on maintaining the combat capabilities of fighters acquired in 80-90 years of the last century.

Modernization of the Indian front-line fighters MiG-29 to the version of the MiG-29UPG is carried out under the contract, which was signed in 2009 year. The amount of the deal between the two countries is estimated at 900 million dollars. From the Russian side, RAC MiG takes part in this transaction. Thanks to the modernization program, the service life of the fighters will be brought to 40 years. Aircraft will receive new airborne electronic equipment, as well as new radar "Zhuk-M". This airborne radar is able to detect up to 60 various air targets at a distance of up to 200 km. 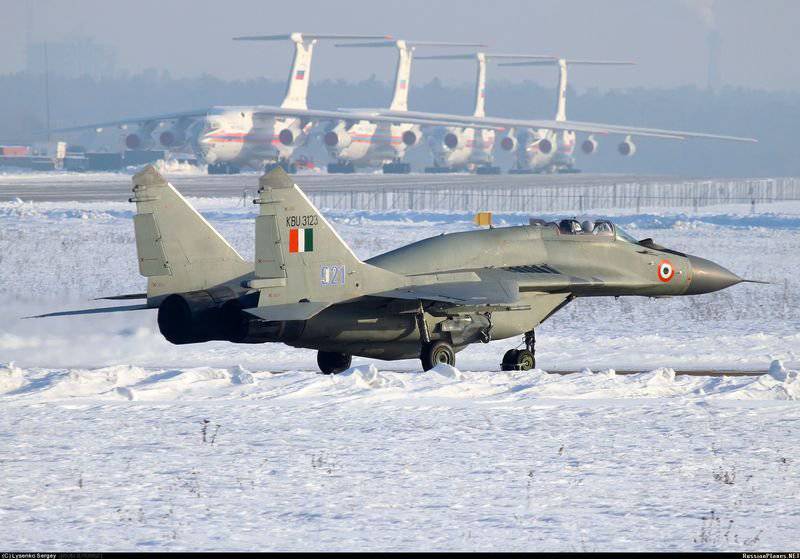 Modernization of the first 6 fighters MiG-29 for the Indian Air Force has already begun, the aircraft will be upgraded at the Nizhny Novgorod aircraft factory "Falcon" of the MiG corporation. At the same time, the remaining 90% (we are talking about 63 fighters) will be upgraded directly in India at one of the repair facilities of the Air Force. At the same time, it is planned to use the sets of equipment supplied by RAC "MiG". As part of the modernization, the fighters will receive a complex of modern avionics, which is unified with the similar complex of MiG-29K ship-borne fighters already delivered to India. It is reported that the onboard equipment MiG-29UPG will include modern systems of Indian corporations Hindustan Aeronautics Ltd and Bharat Dynamics Ltd, as well as systems and devices manufactured in France and several other countries.

In addition to the new onboard equipment, the upgraded front-line fighters will receive an expanded nomenclature of weapons. It is also planned to finalize the power plant and airframe. Without this, it would be impossible to imagine the growth of the service life and resource of the machine. At the same time, the aircraft will be equipped with an in-flight refueling system, and the onboard fuel will be increased by using a surface-mounted fuselage tank located behind the pilot's cabin. These activities allowed the fighter range to be increased by 1000-1500 km.

In general, we can state the fact that the adopted concept of modernization of Indian MiG-29s corresponds to the MiG-29SMT program adopted in Russia. Since 2009, these fighters have entered service with Russian aviation parts and have already been successfully mastered by pilots. When creating the avionics complex of the improved MiG-29UPG fighter, at the request of the customer, the integration of production systems from different countries ("international board") was implemented. This experience was gained a long time ago and proved itself quite successfully, in particular, in the framework of the modernization of the MiG-21UPG Bison fighters, as well as the creation and construction of the MiG-29K / KUB and Su-30MKI fighters. 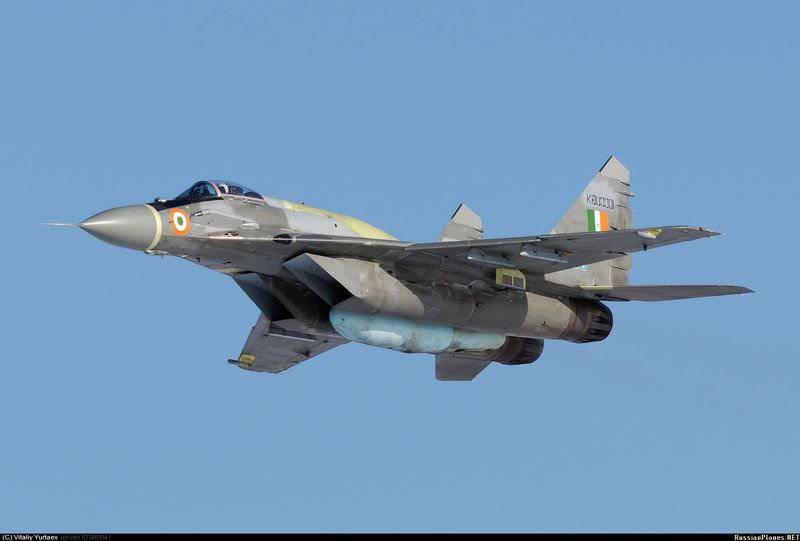 The basis of the weapons management system of the new fighter will be the Zhuk-M2E radar, equipped with a slotted antenna array, which was created and manufactured by Phazotron-NIIR, as well as an optical radar station - OLS-UEM with thermal imaging, television and laser observation channels, developed by the Moscow Research Institute of Precision Instrument Engineering (OAO NPK SPP). Similar OLS and radar are already used on the ship version of the MiG-29 fighter. The information and control field of the cockpit is built on the basis of multifunctional color liquid-crystal displays. The “international” segment of the fighter’s avionics equipment includes the inertial-satellite navigation system of the French company Sagem, the Thales helmet-mounted target targeting system, the Israeli jamming station and the Indian radio intelligence station (similar systems are used on MiG-29K / KUB aircraft).

Additional armament of the upgraded fighters, as well as on the MiG-29K / KUB 29SMT, will be medium-range air-to-air missiles with active radar homing head RVV-AE, as well as high-precision means of destruction of sea and ground targets - X-31А anti-ship missiles, equipped with active radar homing, X-29T general-purpose missiles, equipped with a television homing head, X-31P anti-radar missiles with a CGS passive CGS, and also CAB-X adjustable bombs NUMXcr with television homing on target.

Ctrl Enter
Noticed a mistake Highlight text and press. Ctrl + Enter
We are
MiG-29: sales prospectsLift force "MiG"
73 comments
Information
Dear reader, to leave comments on the publication, you must to register.