April 10 2013
108
8 April 2013 of the year Margaret Thatcher died - the first and so far the only woman in the UK who became the country's prime minister. To say that Margaret Thatcher’s activity as head of the British Cabinet of Ministers was contradictory from the point of view of both her supporters and her opponents is to say almost nothing. The daughter of an ordinary English shopkeeper (Roberts) was brought up in a very rigid tradition, and, apparently, this version of education left its mark on her entire future, including political life. Rigidity, uncompromising and frank obstinacy - these are the traits that distinguished people who knew Thatcher personally. At the same time, a very narrow circle of people considered Thatcher to be their friend, and she rarely used the word “friendship” in her speeches and interviews. 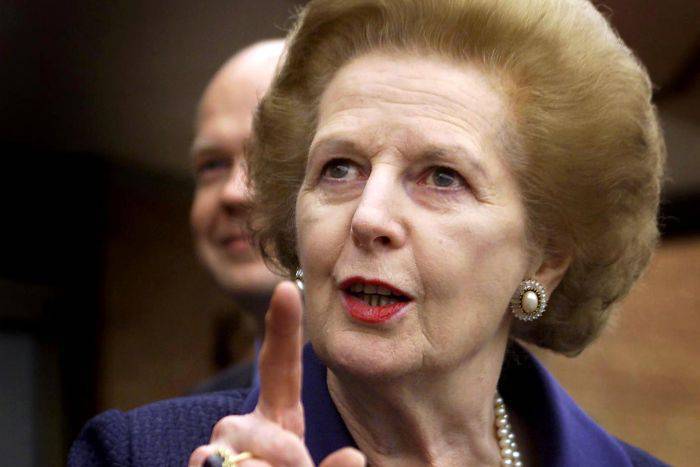 Margaret Thatcher, after a lengthy inner-party and parliamentary struggle, took the premiership in 1979, before having worked for almost five years as British Minister of Education. Even then, some steps Thatcher caused a controversial reaction from ordinary Britons. The main idea of ​​Thatcher at that time (and in all its political times) was the idea of ​​reducing budget expenditures. Apparently, the father's commercial vein made itself felt ...

The quintessence of her desire to reduce budget expenditures was the decision to cut student social guarantees. One of the most resonant manifestations of this kind of decision was the abolition of the supply of primary and middle school students with milk. Thatcher’s move turned millions of Crown subjects against her, and at the same time demonstrated that in order to bring the British economy out of a protracted crisis, it is ready not to stop at nothing. This thesis Thatcher successfully proved throughout his political career.

After becoming prime minister, Thatcher went for measures that were extremely unpopular in the United Kingdom. She cut budget spending on higher education, raised indirect taxes, trying to keep public criticism within the framework of a storm. In addition, Margaret Thatcher went to a sharp decline in the level of subsidies to those British regions that themselves could not reach the final economic profit for a long time. Centralized subsidies to public sector enterprises have declined, and a fairly tough privatization policy has been pursued. In particular, the manifestation of such a policy can be considered the Thatcher decision on the privatization of enterprises in the coal sector. The state actually abandoned the coal industry, which at that time was unprofitable in the UK. The privatization of mines led to a complete sectoral collapse, which significantly increased the unemployment rate in the country, and hundreds of thousands of people (miners and their families) put it on the brink of survival.

UK discontent grew. In the first three years of the premiere of Thatcher, the level of real production in the United Kingdom fell by almost 10%. Even That’s supporters looked at the Thatcher’s economic methods with mistrust, and there’s no point in talking about the position of political opponents from the Labor Party. The prime minister tried to convince of some easing of economic pressure, but Margaret Thatcher’s position was unchanged. She stated that the decline in production was a temporary phenomenon, the main thing was to curb inflation. Inflation has indeed declined, but the purchasing activity of the British has also decreased along with it. The budget required the infusion of solid funds. And the main source of infusion of funds with rather dubious options for the implementation of economic plans at all times was the development of the military industry, which had to be applied somewhere.

And luck smiled Margaret Thatcher. From the point of view of an ordinary person, war can hardly be called a great political success. But the fact of the matter is that Thatcher was not a simple person. She used the Falkland War Crisis to raise her political rating within the UK and declare herself throughout the world. And that Thatcher succeeded.

The armed conflict itself is believed to have been launched by the Argentine side in April 1982. Then General Galtieri, who came to power in Argentina, decided to order the landing of the Argentine troops on the Falklands. The British military corps, who was on the islands, gave the Argentines a fight, but in the end, after short fights, he was forced to declare surrender. At the same time, in London it was decided to go to the rescue of their soldiers to release both themselves and the entire archipelago. The “liberation” of Falklands was understood to mean their return to the bosom of Britain.

After the outbreak of hostilities, Argentina had a rather significant advantage for the simple reason that it was much closer from the Falkland Islands to its shores than to the UK. Many military experts of the time expressed the idea that London would have to admit defeat. That is how ordinary Britons believed, more and more critics were speaking about Thatcher’s actions, which led to the escalation of the conflict in the South Atlantic. But the conflict ended in favor of Britain, which incredibly strengthened the position of Margaret Thatcher as prime minister, and breathed a vivifying impulse into the development of the British economy. This is truly a small victorious war ...

By the way, it was at this time that Thatcher got her nickname “Iron Lady”, which was “produced” by Soviet journalists and got acclimatized in the West.

And about the conflict in the Falklands today there are judgments that the war was provoked not by Argentines, but by London, and it was Mrs Thatcher. How justified are these rumors? - it is difficult to speak, but история often presents many sensations. And many documents on that war of the 1982 model of the year have not yet been declassified by the United Kingdom.

Anyway, the war really helped Britain and Margaret Thatcher personally, firstly, to distract the population from the economic crisis, and, secondly, it served as an impetus for industrial growth and reduction of unemployment. Against the background of their own success, Thatcher decided to go on an original move: to announce early elections. The conservatives celebrated the victory, and Thatcher once again remained at his post, using the priority of popular support.

However, after the "dizziness from success" began to fade away, new problems emerged in the UK economy, which Thatcher found it necessary to solve in its "iron key". She introduced the so-called communal tax, which was actually levied on residents of households just for the fact that they (residents) along with their property simply existed in this world ... The British, dissatisfied with the new economic excesses of their prime minister, rushed to the streets of cities, but then the British the cops. In just one day of protests in London, the police arrested more than three hundred people, many of whom subsequently received realistic deadlines. About 120 people were injured of varying degrees of severity from the excessive desire of the police to restore public order. True, then (1990) the West did not consider such methods anti-democratic, nor does it consider it now, if the demonstrations are held in London, Washington and other capitals of immutable democracies ... Moscow or, for example, Minsk is another matter ...

Margaret Thatcher and coverage of her activities as British Prime Minister is a tidbit for compilers news releases in the USSR (up to a certain point). Thatcher was for the Soviet people the staunch embodiment of the very decaying capitalism, which is prone to aggression towards other states. News reports (about the Falklands war, tax hikes, mine closures, British protests) contributed to this.
Thatcher on such a position of the USSR did not care. Although, in fairness, it must be said that she, too, often spoke eloquently about the Soviet Union itself. In particular, her speech about the fact that the USSR is a country that poses a threat to the Western world, is quoted today by many publications.

And here is a more "strong" quote from Mrs. Thatcher of the 1988 sample of the year, one of the authors, by the way, the idea of ​​the "golden billion":
According to estimates of the world community, it is economically feasible to live on the territory of the USSR 15 of millions of people
Iron, do not say anything ...

Her support for the initiatives of Mikhail Gorbachev in the USSR today is also overgrown with new details. There is a speech text (not confirmed by official sources, although such a text is unlikely to be something officially confirmed) Thatcher, in which she allegedly states the following:

“A very difficult situation has developed for us. However, soon information came about the imminent death of the Soviet leader and the possibility of a person coming to power with our help, through which we can realize our intentions. This was the assessment of my experts (and I always formed a very qualified group of experts on the Soviet Union and, as necessary, contributed to the additional emigration of the necessary specialists from the USSR).

This man was M. Gorbachev, who was characterized by experts as a careless, suggestible and very ambitious man. He had a good relationship with the majority of the Soviet political elite, and therefore his coming to power with our help was quite subtle. ”

Is this text authentic, or is it another intricate conspiracy science? - hard to say. But the fact that the “restructuring” of Mikhail Gorbachev is in some way similar to the economic perturbations of Margaret Thatcher is a fact. Only now Gorbachev was not as iron as his British counterpart, although, in the end, both him and her were actually “pushed” onto the back political plan by their former supporters.

In general, in the political fate of Thatcher, as it turns out today, weird enough. Suddenly the war with Argentina turned up, internal party failure, support of opposition movements in the late years of the USSR - one of these oddities ... But all these oddities sooner or later the light will be shed.

In the meantime, it is worthwhile to state that Margaret Thatcher, as a representative of a whole epoch that ended with the collapse of the Soviet Union and a new redivision of the world, passed away along with this epoch. And iron is not forever ...