Mali: gold and a thousand French

April 11 2013
25
Recently, the French president reported that before the end of the year Paris intends to cut military contingent in Mali up to a thousand people. “At the end of April we will begin the withdrawal of troops. Now there are thousands of 4 military. In July, no more than 2 of thousands of French soldiers will remain in Mali, at the end of the year only a thousand, ”the president said, noting that, if necessary, France’s military presence in the country could be strengthened. And at any time. According to Hollande, France has already achieved the solution of the main operational tasks. 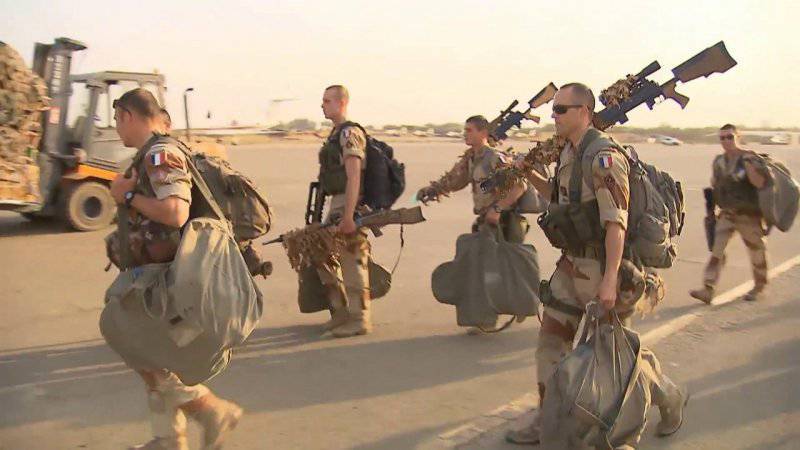 Statement from the category of invigorating morning speeches. Earlier, Francois Hollande, if you believe the numerous reports of the Western press, promised to finish the operation in Mali by March and completely withdraw troops from there. Analysts were tormented by vague doubts that France either discovered a new Afghanistan, or climbs in Mali, not at all for the sake of killing the unfortunate terrorists, who are full in Syria and whom, as it turns out, it willy-nilly supports it. (However, apparently, not enough support. The other day, Ayman al-Zawahiri, the boss of al-Qaeda, in a radio address She urged their supporters and defeat the army of Assad in Syria, and the French in Mali: “Let your battle go in the name of Allah with the aim of establishing the power of Sharia. Do everything possible so that your holy war leads to the creation of an Islamic state ").

Behind another statement by the French president, it seems, there is not a triumphant triumph (appointed not for April, not for July, not for the end of the year), but not for sadness or sadness: they say, yes, I admit that our contingent is not will get out of Mali until the end of the year. No, this is not the case. Read on.

Following the short speech of Hollande, the words of the UN Secretary-General sounded on the air. Having formulated the conditions under which the international peacekeeping force can be deployed in Mali, Ban Ki-moon explained The Security Council that in Mali, thousands of military personnel and 11,2 police can operate under the flag of the United Nations, many of whom are already present in the country in the form of a military contingent of neighboring states sent there as part of the ECOWAS peacekeeping mission. The transfer under the auspices of the UN will solve the problem of financing African peacekeepers - one of the main issues facing Paris. The Secretary General believes that African peacekeepers can hardly be able to resist the Islamist detachments themselves. Ban Ki-moon's warriors will not begin operations in Mali before summer.

Fighters for peace around the world from antiwar.com have cast their voices here. In their opinion, published in Russian on the portal "Military Observer", the retention of military men in Mali around 1000 forever (as said by Laurent Fabius, the foreign minister) is not meant to achieve the goal of “fighting terrorism”, but to ensure control over the natural resources of Mali. To prevent the French warriors in Mali from stagnating, the military leadership developed a rotation plan.

As for the actual war against terrorists (who already organize suicide attacks, for example, in Timbuktu), then the battles will be fought not by the French, on whom the UN Secretary General relies, but by African soldiers (primarily from Chad), who are about to be promoted to peacekeepers.

The authors of antiwar.com have no doubt that the cities of Kidal and Tessalit were liberated by the Tuareg rebel troops, and not by French soldiers. Parisians arrived only for the final sweep. Patrols are also almost universally taken by Africans.

And what about the French? In the near future, they will train those who are storming the outposts of the Islamists. And so that the learning France is not impoverished, it is supported by the EU. Recently, a European Union mission began in Bamako: within its framework, Malian police and military will soon begin training.

8 April French military embarked on to operation "Gustav". According to General Bernard Barrera, commander of the land units of the French contingent, this operation promises to be the most visible action by France since the intervention in the situation. The operation involved about a thousand soldiers, several dozen armored vehicles, helicopters and UAVs.

"Visible"? The French army, of course, is hard not to notice, but it so happened that on the first day of Gustav the military did not meet a single Islamist at all. In bracing reports, the 340 neutralization of artillery shells hidden by the rebels ... under acacias is reported.

Alexander Mezyaev ("Fund of Strategic Culture") recalls that the humanitarian situation in the Republic of Mali is extremely difficult. There are about half a million refugees there, and 300 thousands more are “internally displaced persons”. Hunger in the country: 750 thousands of people urgently need food aid, 660 to thousands of children in 2013 faces malnutrition.

In Mali, they even ate a camel donated by the “grateful natives” of Francois Hollande. Purely from “humane considerations” the camel was either temporarily or permanently transferred to the maintenance of one family in Timbuktu, writes Dmitry Semushin, a columnist IA "REGNUM". This family, having waited a couple of months, and ate a camel Hollande. The alien, previously containing the animal, claims that it was stolen from him. This happened after his house was destroyed - by the way, during a French air raid.

This is how "humane considerations" turned into "humanitarian."

Despite the beginning of the famine, the government of Mali is interested in Russian military equipment. The Malian government turned to Rosoboronexport with the intention of purchasing weapons for the needs of its army. We are talking about the acquisition of Russian helicopters Mi-35 and Mi-17, combat and transport aircraft, BTR-80, air defense radars, as well as small arms and ammunition, according to Artyom Kobzev ("Voice of Russia").

Mikhail Khodaryonok, editor-in-chief of the weekly Military Industrial Courier, said: “It’s no secret that Mali is hot enough now. And the question of where the scales will still swing, remains open. Russia is less interested in the loss of Mali’s statehood and in the fact that this Central African state is captured by Islamists. Russia, among other things, has interests in neighboring countries. Therefore, in all likelihood, the question of the supply of helicopters and armored vehicles will be resolved, in my opinion, positively. And, as I see it, agreements on these issues are already moving into a purely practical plane. ”

The media write that the French are unlikely to protest against Russian deals with the Mali government. And that's right: why? The French will be engaged in their business in Mali, and the Africans - with Russian machine guns and on Russian helicopters (bought, of course, on credit) - their own. While local fighters and equipped warriors of Ban Ki-moon will die on the battlefield or during the bombings of Islamist suicide bombers, European businessmen will begin to extract money from the land of Mali. Now, during the crisis of the dollar and the euro, when central banks in many countries of the world began to actively buy gold, the sign of the anti-terrorist operation in Mali to the French is more convenient than ever.

According to open data, Mali is not only the region’s largest exporter of cotton, but also the third largest gold producer in Africa. Yellow metal is the main source of income of this state. Mali produces about 50 tons of gold per year (20% of the country's GDP and about 70% of exports). Mali's gold reserves are estimated at 600-800 tons.

Who is the main buyer of Malian gold? It is not difficult to guess - China. Its share in purchases of gold from Mali is 26,4%. Here we find the second goal of the French government: to oust China from Africa. This goal is consonant with the goals of the United States, which does not like the growing power of the Middle Kingdom.

Not for nothing, Leonid Ivashov, President of the Academy of Geopolitical Problems, said at the end of January that he considered the operation in Mali to be a continuation of the war for global resources.

In Mali, считает General Ivashov, the Americans "play with the hands of Europeans." The French will clear the territory of radical groups, and then there will be people from Washington - to bring the power they need to power. The analyst considers the peacekeeping operation a “cover-up” of true goals. There is the establishment of control over the territories rich in resources and bringing to power those forces that will forever worship the West. Moreover, Hollande, the general believes, is concerned about his future and understands that without the support of the Americans, it will be difficult for him to hold onto the presidency of France. However, trying to restore his reputation, he - just like his predecessor Sarkozy - does not understand American double standards.

Comrade Ivashov was right. In order to bring the same forces to power, Paris has already scheduled elections in Mali - and in a very short time. French Foreign Minister Laurent Fabius, arriving in Mali, said: “Elections will be held in July. No one, including politicians, offered any other options, it is very important for us that the voting be held within the specified time frame. ” Analysts point out that the timeline is too short, given the instability in the north and the presence of 400 thousands of refugees.

Here you have the fight against terrorism. Here you have a thousand French special forces, who, despite the economic crisis, will certainly be present in Mali, from time to time reasonably rotated. Who will get more gold - the Americans or the French - is still in question.

Observed and commented on Oleg Chuvakin
- especially for topwar.ru
Ctrl Enter
Noticed oshЫbku Highlight text and press. Ctrl + Enter
We are
War in Mali. Russians are victims of jihad in West AfricaResults of the week. “Yes, everything is so. Everything! They saw, condemned, waved, potryndel, smoked - and that's all. And everything is so ... "
Military Reviewin Yandex News
Military Reviewin Google News
25 comments
Information
Dear reader, to leave comments on the publication, you must to register.