April 10 2013
36
At the VIII International exhibition of weapons, military equipment and ammunition RUSSIAN EXPO ARMS-2011 in Nizhny Tagil were shown armored cars of increased security of the Typhoon family - Ural-63095 and Ural-63099.


The Typhoon armored car family is intended for the transportation of personnel, special cargoes and towing of trailer systems on all types of roads and terrain, as well as for installation on modular versions of various equipment or weapon systems. It is an analogue of Western armored vehicles MRAP (Mine Resistant Ambush Protected). "Typhoon" will serve as a single unified platform for the "light" brigades of the Ground Forces.

All vehicles of the family are unified in terms of engines (YaMZ-536, 450 hp), BIUS, mine protection and anti-bullet protection and independent hydropneumatic suspension. It is possible to install a remote-controlled module with a machine gun or an automatic grenade launcher. Combined (ceramics + steel) armor protection produced by SRI Steel, as well as armored glass manufactured by Magistral LTD, provide circular protection at 4 level of the STANAG 4569 standard (from 14.5-mm armor-piercing bullets of type B-32). Anti-mine protection is provided by a V-shaped bottom and energy-absorbing seats and corresponds to the level of 3b in accordance with STANAG 4569 (explosive device up to 8 kg in TE). The roof has hatches for emergency escape in the event of overturning. Also on all versions of armored vehicles around the perimeter video cameras are installed, which allows you to monitor the situation from inside the transport module, or use monitors installed in the cab to control the armored vehicle in case it is impossible to use the windshield. The habitable space is hermetically sealed, with artificially maintained overpressure, filtration of air entering inside is provided by the installation of the PSF-100. All machines of the family can be made in three-axle or four-axle versions.

Modular armored car Ural-63095 "Typhoon"
Bonnet multifunctional modular car. The habitable compartment is divided into a three-seater cabin and a passenger module not communicating with it. Can be transported in the module to 16 people in full gear. The landing is dismounted through the door.

One-volume car Ural-63099 "Typhoon"
Kapotny multipurpose one-volume car for transportation of personnel. It has a single habitable compartment. In addition to the three seats in the cabin can transport up to 12 people. The landing is dismounted through the door.

So far, the Ural designers are at the beginning of the way to create special protected army trucks. The design work for the new Typhoon family should be completed by 2014. The samples of the Typhoon presented at the exhibition have already taken into account the mistakes and shortcomings of the first experimental machines. In total, the family of armored "Urals" plans to create three variants of bonnet cars: with wheel formulas 4 × 4 (total weight 6 t), 6 × 6 (10 t) and 8 × 8 (15 t). 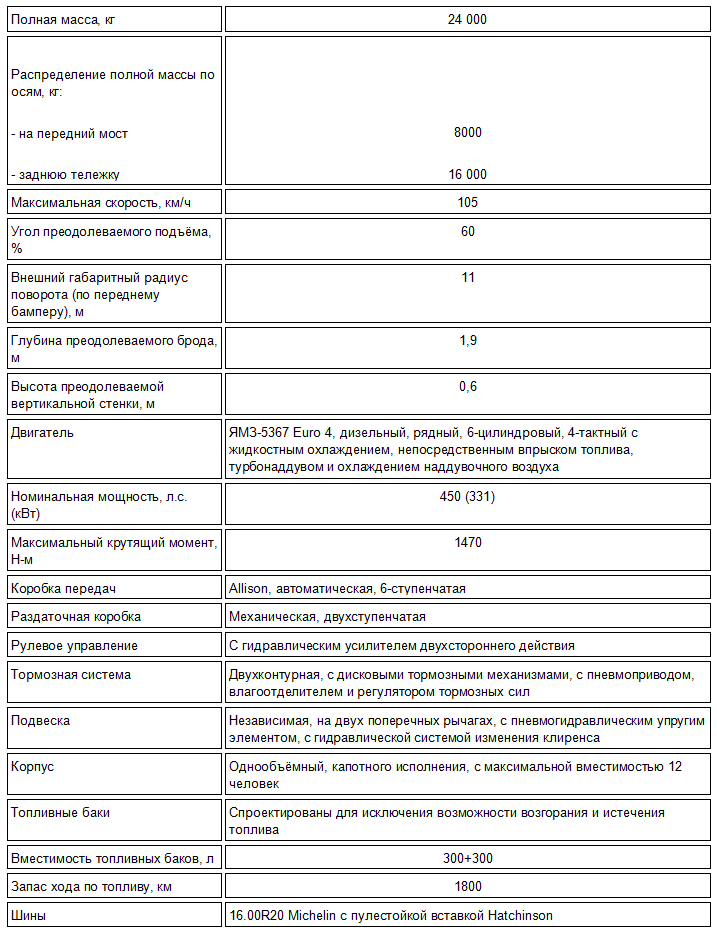 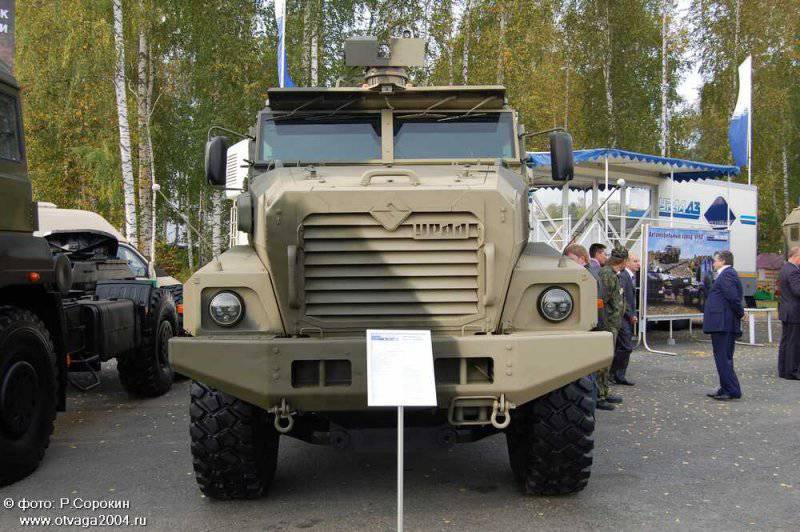 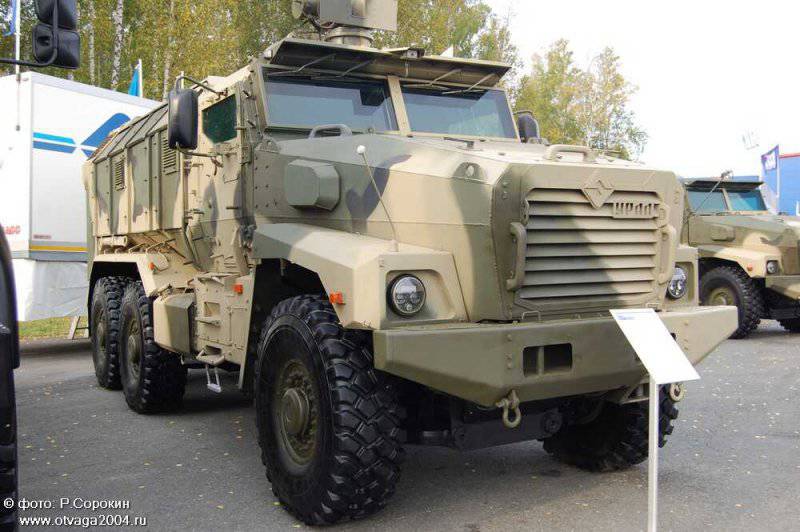 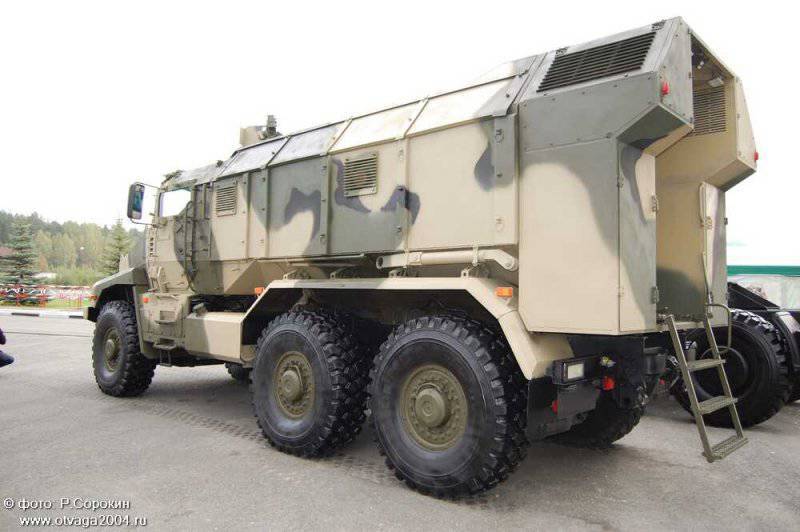 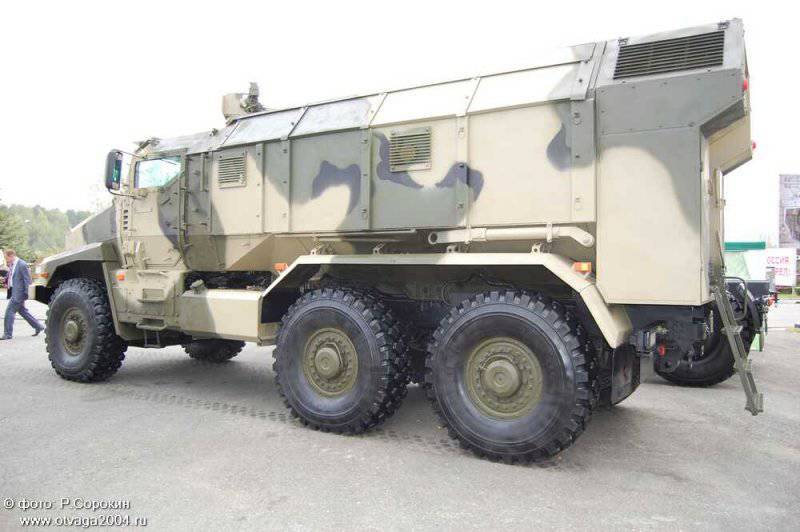 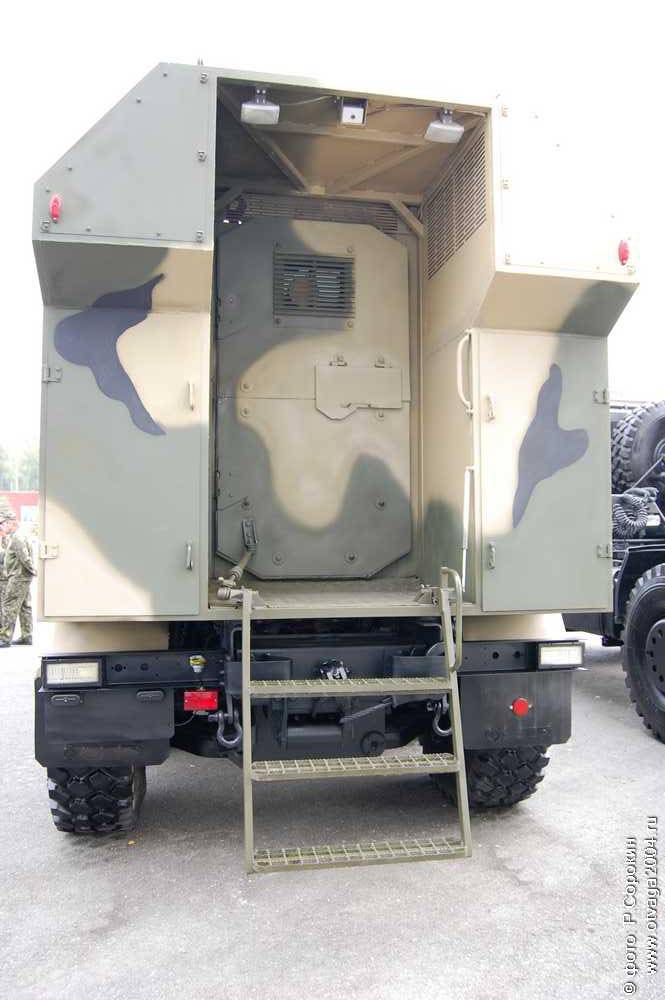 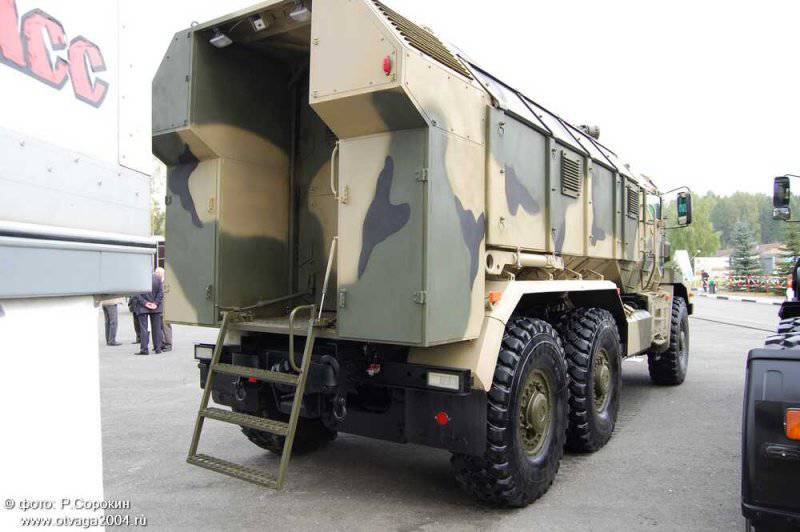 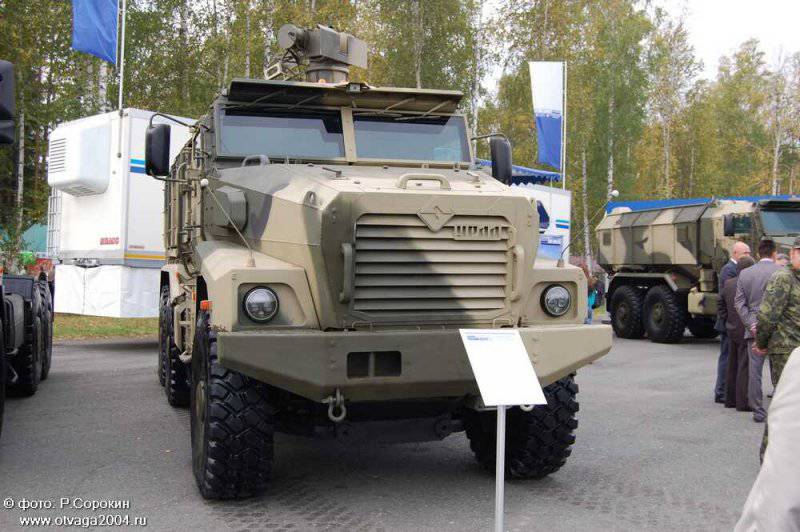 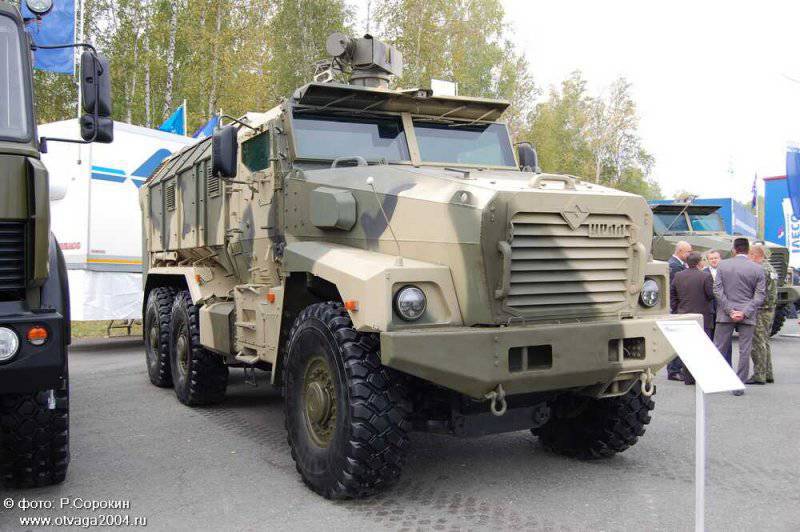 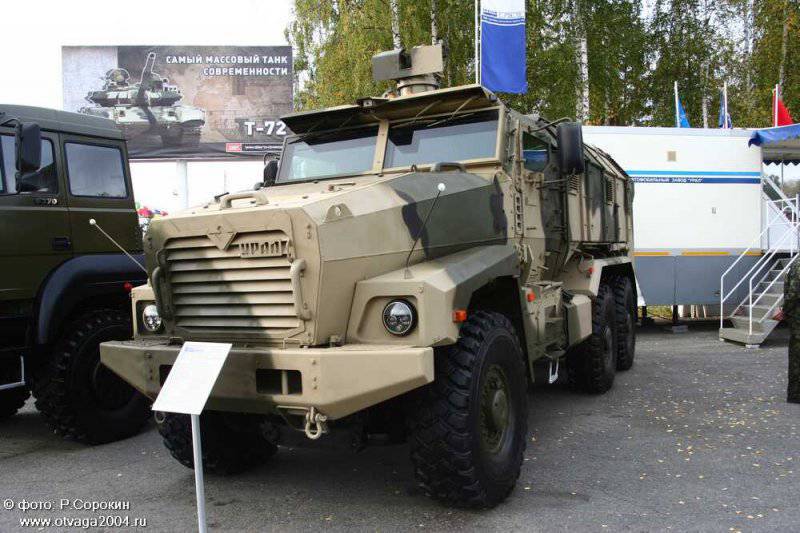 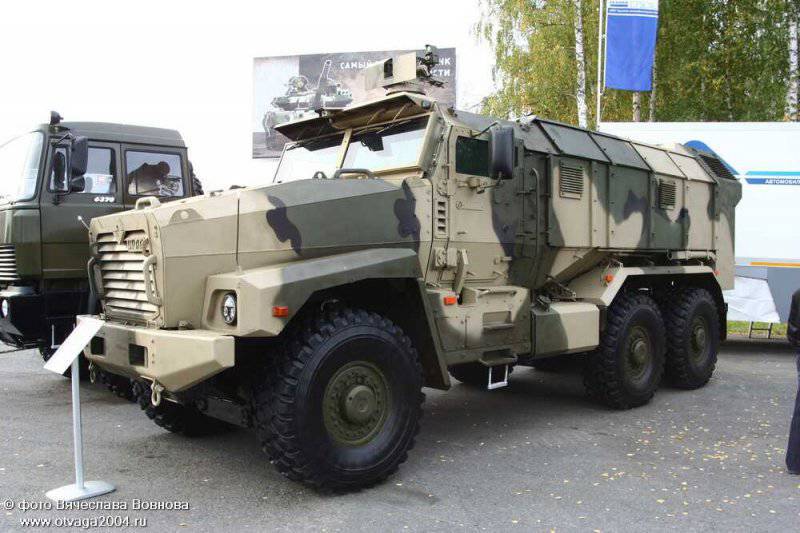 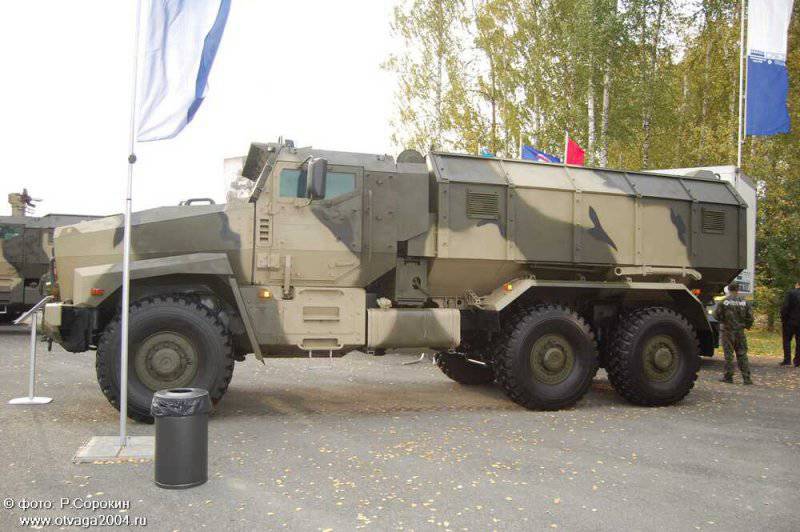 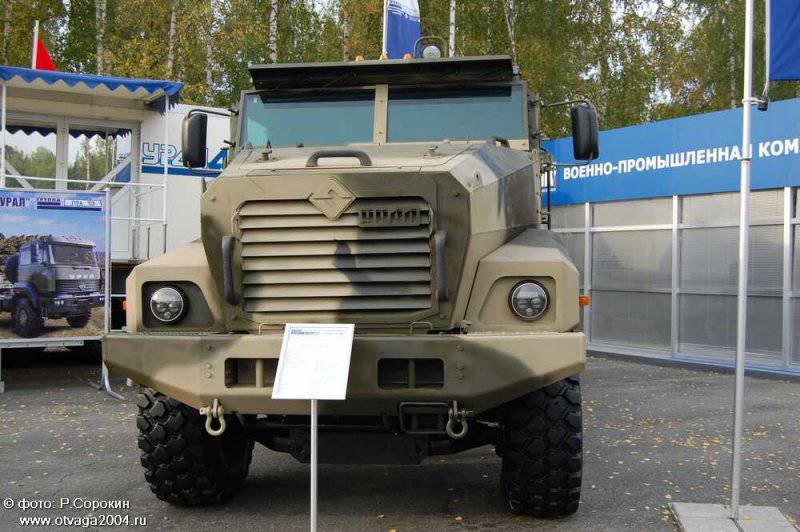 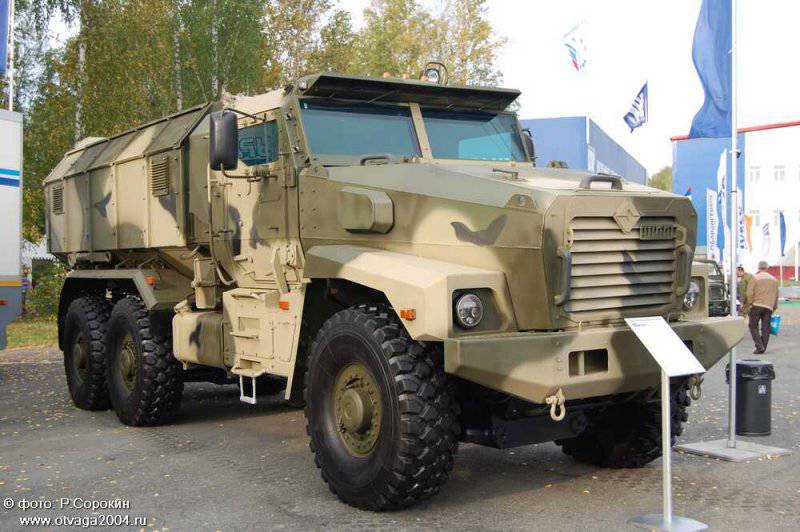 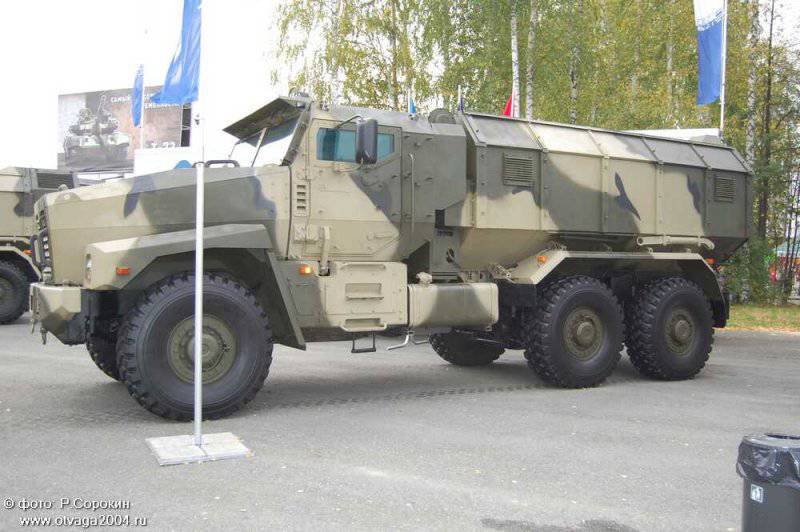 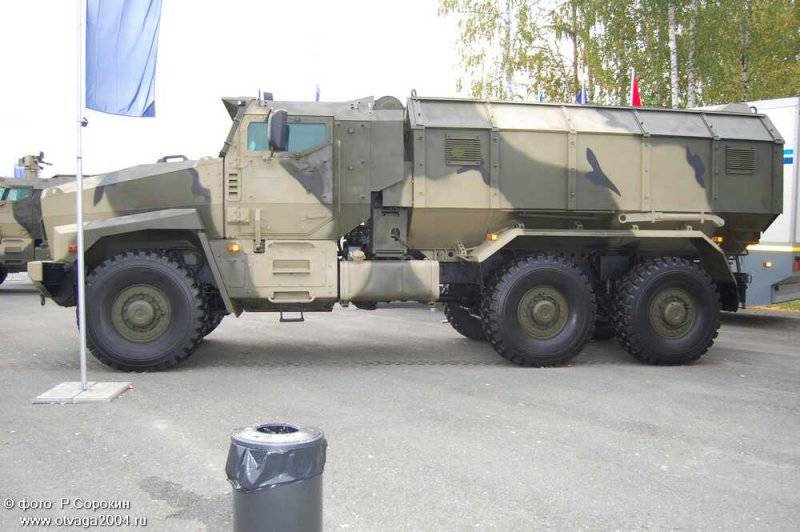 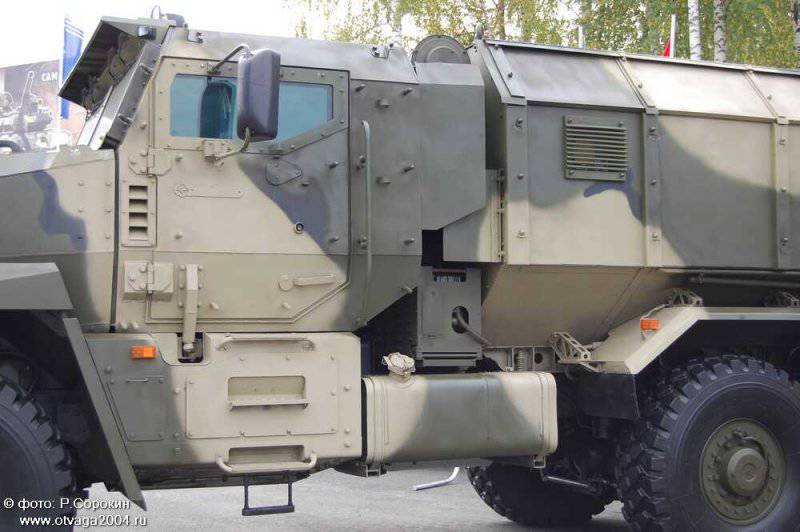 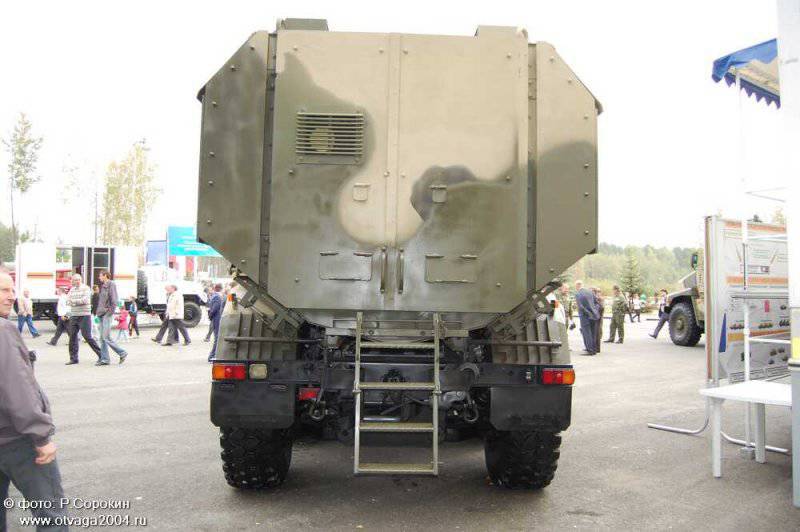 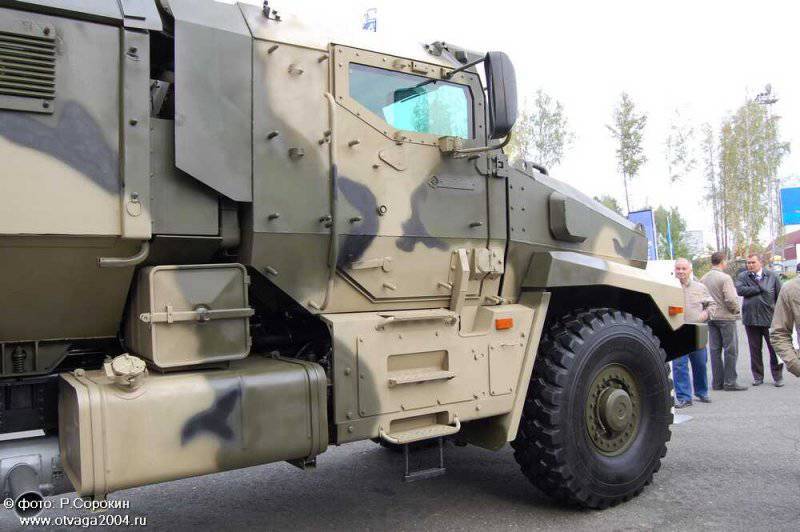 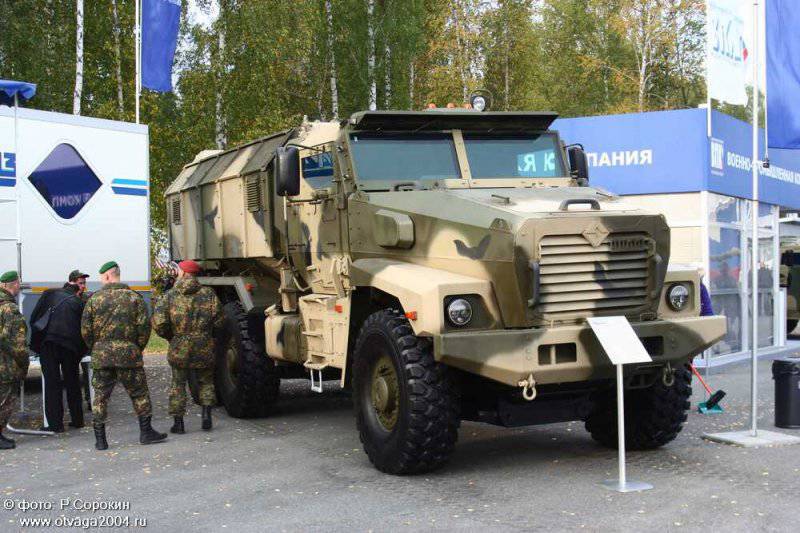 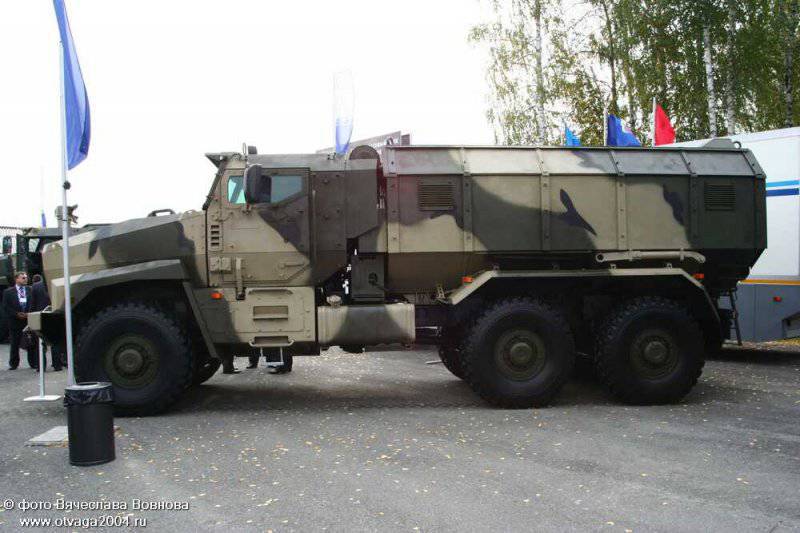 Ctrl Enter
Noticed a mistake Highlight text and press. Ctrl + Enter
We are
Russian Arms Expo-2013: exhibits and statementsInterpolitech-2012 - Automotive part of 1: Armored vehicles for the transport of personnel
36 comments
Information
Dear reader, to leave comments on the publication, you must to register.