April 9 2013
5
Konstantin Dmitrievich Vorobyov is a Russian writer who took part in the Great Patriotic War, one of the brightest representatives of “lieutenant prose”, although his works in Soviet Russia moved, printed with bills or were not published. So the story “This is us, Lord!” Was published after the death of the writer, more than 40 years after it was printed. In 1994, the writer was posthumously awarded them. Sergey Radonezhsky, and in 2001, the Prize for them. Alexander Solzhenitsyn.


Konstantin Vorobyov was born on September 24 on 1919 in the village of Nizhny Reutets, Kursk Region. According to rumors, his real father could be a white officer. But for sure nothing is known about him. According to the writer's son, Constantine did not know his father, and Vorobyev was not his last name. The unusually beautiful mother of the future writer Marina was by nature a very loving woman. Constantine was born while her husband was on the German front. When he returned home, Dmitry Matveyevich Vorobev forgave the sinner and gave the child his last name and patronymic. Marina did not dedicate anyone to her secret. At the same time, father's relatives called the 2's possible fathers of a boy - a rich man by the name of Pismenov, in whose house Marina went to do cleaning, as well as an Austrian who stood on their guard.

The childhood of the writer fell on the establishment of Soviet power in the country. But in 20, the Vorobyovs family lived quite well, thanks also to the fact that the head of the family worked as the head of the village shop. But once there was a shortage in the selmag, and Dmitry Matveyevich was arrested. Soon after, the central regions of the country covered a terrible famine, which was the result of collectivization carried out in the USSR. In 1933, the village of Nizhny Reutets became extinct with entire families. All that he experienced as a child, Konstantin Vorobyev subsequently reflected in his works. First of all, we are talking about his village prose of the story “My friend Momich”, as well as “How much joy in Rokitnom joy” and “Chenille”. He also wrote his best works on the war, based on his own experience, that he himself had to endure. 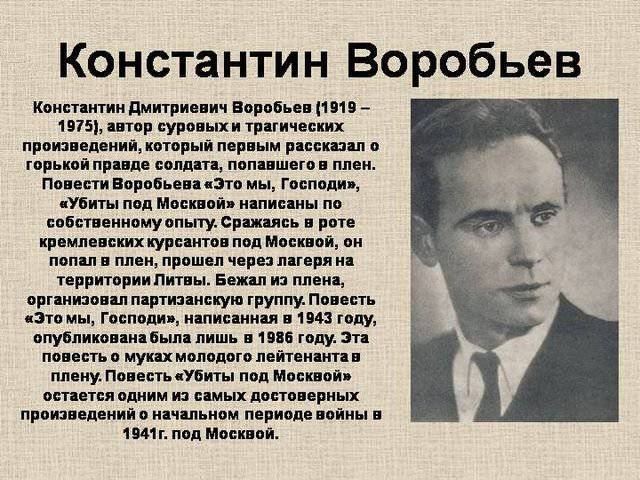 In order to save his family from hunger, Konstantin Vorobyev, at the age of 14, began working at a local store, where he was paid with bread. After graduating from the village school, he spent some time studying at an agricultural college in Michurinsk, and after that he graduated from the courses of cinema mechanics, returned back to his native village and got a job as a literary employee in a district newspaper. In 1935, the future writer wrote a poem to the death of Kuibyshev, in which there were such lines: "You are not alone, in hell with you and Stalin will be in a short time." After these poems, Vorobyov was fired from the newspaper, although he was officially accused of keeping the book “War of the 1812 of the Year”, which was for the future desktop writer.

Following the advice of friends, Konstantin Vorobyev did not wait for the worst measures in his address and moved to Moscow to his sister. In Moscow, he studied at an evening school and at the same time continued his literary activity, working in the editorial office of the newspaper Sverdlovets. During his service in the Red Army from 1938 to 1940, he also worked in this field, collaborating with the army newspaper “Prizyv”, and after finishing his service he worked in the newspaper of the Academy. Frunze. From here he was sent to study at the Moscow Red Banner Infantry School. Supreme Council of the RSFSR. Due to the high growth and origin of the peasants Konstantin Vorobyev was enrolled in the company of cadets of the Kremlin College.

In fact, the writer was in the elite part of the Red Army, then it was considered luck. No one would have thought that in the 1941 year of these young guys, selective shots, all as high pressure and small weapons and Molotov cocktails will be thrown towards the advancing German capital tanks. For the vast majority of them, these first battles near Moscow will be the last in their lives. 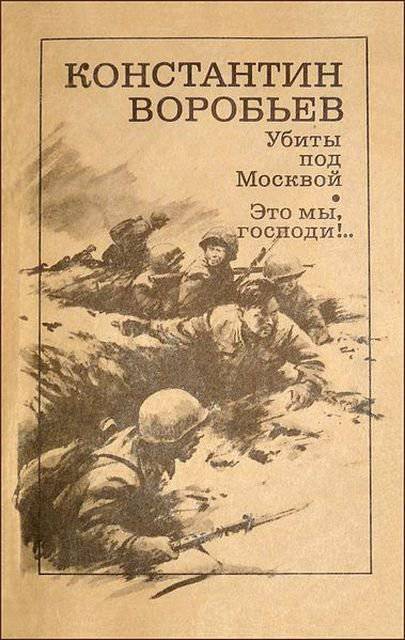 Konstantin Vorobyev was at the front in October 1941, at the height of the German offensive on the capital, when entire Red Army divisions were digested in boilers, some were almost completely killed, many were captured, which in the USSR was equal to treason. Later, the writer will reproduce this situation to the smallest detail in his most famous work, the story “Killed near Moscow”. In this story, the writer did not conceal one of the main subjects of that era — an unaccountable fear not in front of the enemy, but in front of a friend. This can be seen even in such a detail from the story: none of the Kremlin cadet companies decided to take a leaflet that they were dropped from a German aircraft. Looking at this, Captain Ryumin wondered: “Who are they afraid of, me or each other?”. The same motive passes during the meeting of Captain Rumin with the commander of the NKVD detachment, the image of which is reflected in one single characteristic - the “soul-scoffing grin”. It seems that none of the Soviet works on the war did not show its reverse side, as was characteristic of all the works of Vorobyov.

In December, 1941 of the year near Klin, lieutenant Konstantin Vorobyov, was contused when he was taken prisoner by the Germans, after which he was held in various concentration camps for a long time before 1943, from where he escaped twice. In 1943-1944, after fleeing from a camp located in Lithuania, he leads a partisan detachment made up of ex-prisoners of war. For his participation in the partisan movement, the writer was awarded the medal "Partisan of the Patriotic War" 1 degree. During his time in the Lithuanian underground, he wrote his first major work - an autobiographical novel, "This is us, Lord!", Which was devoted to time spent in captivity. In 1946, after the war, he transferred this manuscript to the New World magazine, but then its publication did not take place, yes, most likely, it was simply impossible, since this story was contrary to what was published about the war then. Only in 1986, after 40 years, was this story found in the archives of the New World. Irina Sokolova, a graduate student of the Leningrad State Pedagogical Institute, discovered her. The story was published in the same year in the magazine "Our Contemporary".

Since 1947, Konstantin Vorobev lived in Vilnius. Here he was able to change a large number of professions, he worked as a driver, projectionist and clerk, and was in charge of a store of manufactured goods. In 1952-1956 he worked in the editorial board of the daily newspaper Sovetskaya Lithuania, where he headed the department of art and literature. It was in Vilnius that the first collection of his stories “Snowdrop” (1956), as well as collections of stories and short stories “Gray Poplar” (1958) and Geese-Swans (1960), were published. The first works of the author of the end of 1940-s of the beginning of 1950-s were mainly narrated about the everyday life of a Lithuanian village. 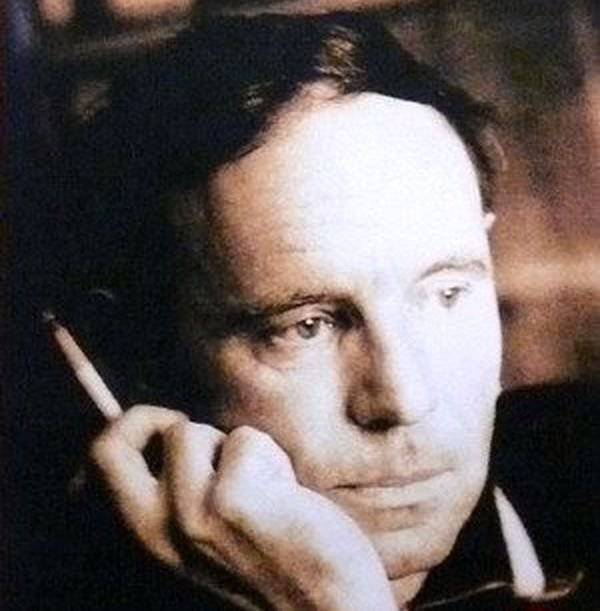 After the release of the collection of stories "Snowdrop" Konstantin Vorobyev became a real writer. But fame brought him his story 1960's. These were the stories “Alexey, the son of Alexei” (1960), “The Cry” (1962) and “Killed near Moscow” (1963). All of them were conceived as a single product with a through hero, but in the end they came out at different times and healed their own independent life. In the story "Alexei, son of Alexei" the action took place in the pre-war village in 1920-1930-s. The main characters of this work, grandfather Mitrich and Alyoshka-sailor, witnessed the tragic breakdown of peasant life.

The stories "Scream" and "Killed near Moscow" refer to those that critics used to call "lieutenant prose." In them, the writer talked about what he witnessed during the fierce fighting near Moscow at the end of 1941. The tragedy of the protagonist of the story "Creek" - the death from the explosion of his beloved girl - has become a symbol of the tragedy of the entire generation, whose youth coincided with this terrible war. The manner in which this and subsequent works of the author were written, critics would later be called "sentimental naturalism." Later, these stories were twice filmed. In 1983, the movie “Immortality Exam” was released, and in 1990, “It's us, Lord!”. The first of them was based on the story of the stories “Scream” and “Killed near Moscow”, and the second only on the story “Killed at Moscow”, while the authors of the latter used the name of another Vorobiev story for the film.

In the middle of 1960, Konstantin Vorobyev wrote a story in which he tried to convey to the reader the “truth about the death of a Russian village”. His aspiration was embodied in the stories "How much in the Wreath of joy" (1964) and "My friend Momich" (1965). Due to the fact that the second story did not correspond to the official ideological attitudes during the life of the author, it was not fully published, the docked version was published in 1967 year under the name “Aunt Egoriha”. The hero of Vorobiev's story “How much joy in Rakitnom joy” has been blaming himself all his life for writing a newspaper article, while still being a Selcor boy, caused the arrest of his own uncle. Many years later, his uncle and his nephew met in the Stalinist camp, in which a former rural correspondent fell after fascist captivity. In this work, Vorobiev tried to hold an important idea for him that the tragedies of the Russian countryside, war and captivity had common roots: the destruction of the social and moral foundations of life under Stalin. The heroes of both the “village” and “lieutenant” narratives and short stories of Konstantin Vorobyov, after the terrible ordeals that had befallen them, turned out to be capable of a spiritual take-off and, through spiritual pain, came to catharsis. 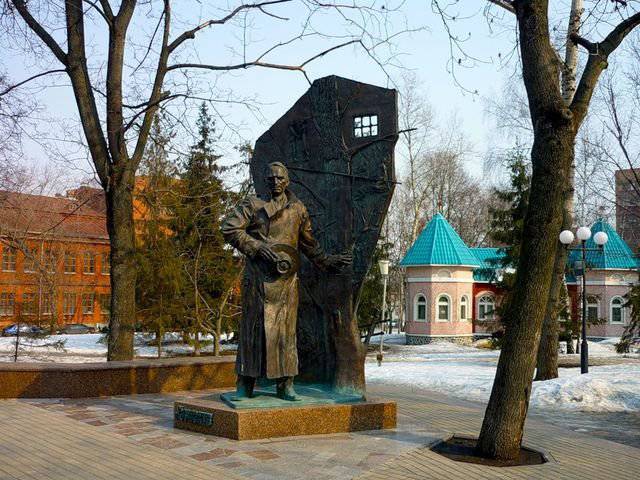 Monument to the writer in Kursk
The writer's life and career was cut short by a serious illness, March 2 1975, he died from a brain tumor in Vilnius. In 1995, the ashes of the writer were reburied in Kursk at the Officers' Cemetery.