April 9 2013
18
GAZ-67 and GAZ-67B are famous Soviet all-wheel-drive cars having a simplified open body in which cutouts were used instead of doors. The car was a further modernization of the GAZ-64, as well as the first model it was developed by the designer V. A. Grachev based on the GAZ-M1 units. This off-road car took an active part in the final stage of the Great Patriotic War, as well as in the Korean War. It was widely used in the army as a reconnaissance and staff vehicle, carrier of infantrymen and wounded, and was also widely used as an artillery tractor for transporting anti-tank artillery guns.


In the army, this car has received a very large number of nicknames, among which may be noted: “goat”, “goat”, “flea warrior”, “pygmy”, HBV (I want to be “Willis”), “Ivan-Willis”. In Poland, this car was called "Chapaev" or "jeep." The production volumes of GAZ-67 and GAZ-67B off-road vehicles during the war years were very small - only 4851 units, which accounted for only 10% of the deliveries to the USSR on the lend-lease of Ford GPW and Willys MB cars, since the main attention in the country was paid to production armored car BA-64B, with which Soviet jeeps had a unification of the chassis. Until the end of the war 3137 cars GAZ-67 and 1714 GAZ-67B were produced. In total, until the end of 1953, the Soviet industry launched the 92 843 vehicle of this type.

After the end of the war, GAZ-67B was very actively used not only in the army, but also in the Ministry of Internal Affairs, the Ministry of State Security, forestry and agriculture, and geological exploration. It even produced a drilling and crane hydraulic machine BKGM-AN, as well as cars-snowplows. The GAZ-67 has become nicer and more reliable than its predecessor, it could work steadily on low-quality fuel, honorably withstand significant overloads and fully work out the specified service life. It was a real car-worker, who gained fame as a durable, traction, cross-country and unpretentious car. 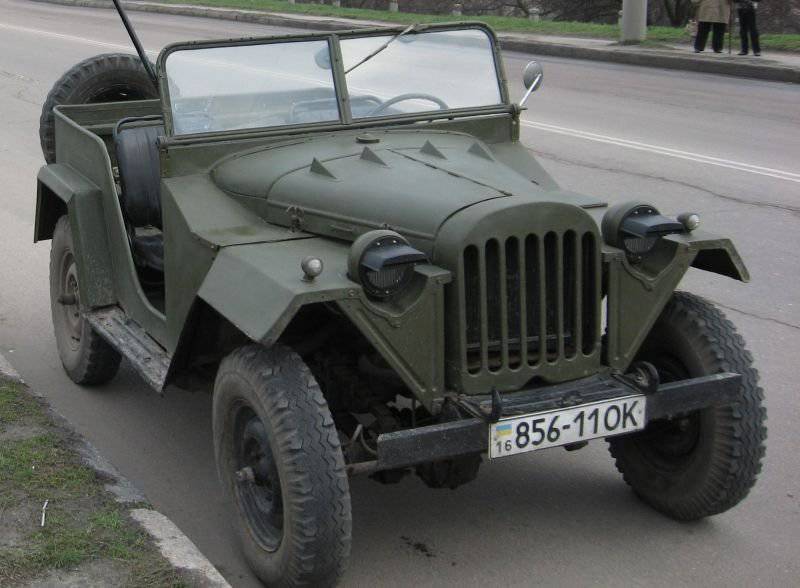 In the fall of 1940, the first information about the US Army multipurpose all-terrain vehicle, the Bantes, appeared in the Soviet press. They became interested in this machine in the USSR, all the more so since a year ago, in Gorky, the first Soviet passive automobile, GAZ-61-40, was successfully tested. The urgency of work on the new machine was determined by a rather complicated international situation, and the events at Khalkhin-Gol showed the need for a more modernized Red Army.

In this case, the Soviet designers had on hand only magazine pictures of Bantam, and therefore they had to invent and invent many things themselves. The basis of the future SUV were taken fairly reliable units and nodes GAZ-61: transfer case, front and rear axle, brakes, steering, drive shafts, wheels. The clutch, engine and four-stage cargo gearbox, well mastered by the Soviet industry, were taken from the “lorry”, installing an improved carburetor and strengthening the cooling system. At the same time, it was necessary to re-create the frame, body, front suspension, radiator and its lining, seats, additional gas tank, steering rods. At the same time, in accordance with the technical assignment issued, the car track had to be significantly reduced. The whole thing was that the car was supposed to be used in the role of an airborne, which means it had to enter the cargo compartment of the PS-84 transport aircraft, which is more commonly known as Lee-2.

The design of the new car, designated GAZ-64-416, was launched on February 3 1941. February 12 the first drawings of the future car were handed over to the workshops of the plant, 4 March started to assemble the first car. 17 March in Gorky finished body work and already on March 25, the finished all-terrain vehicle left the assembly shops under its own power. In April, the car passed troop tests, and already on August 17, the first GAZ-64-416 were handed over to the front. In total, until the end of 1941, the GNKY managed to assemble an 601 machine, however, then they were produced using a temporary technology. So tin car body at the factory bent by hand. All devices and electrical equipment were borrowed from GAZ-MM and GAZ-М1. At the same time their number was reduced to the limit. In particular, on the off-road vehicle there was no coolant temperature gauge, an oil pressure gauge. 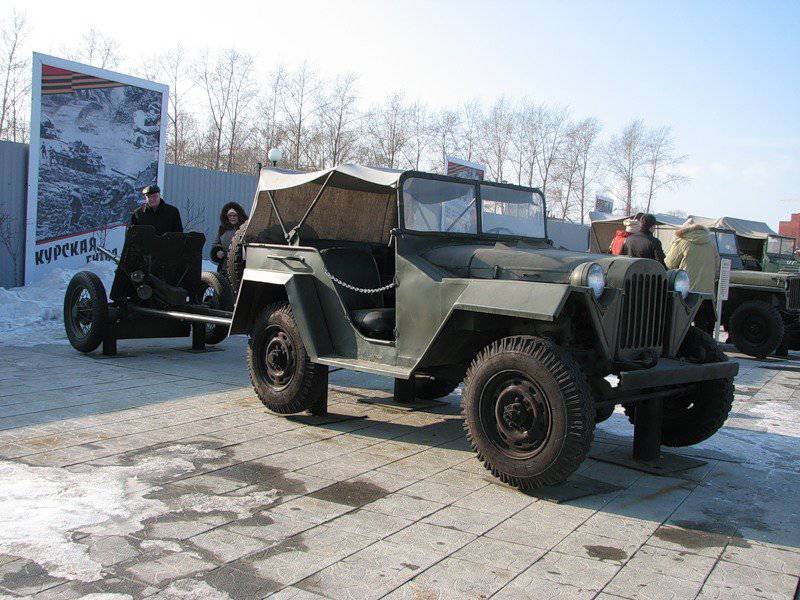 At the same time, in the course of troop operation, it was found that the car had poor lateral stability, which was a consequence of the narrowed track of the car. This made the designers bring the gauge from 1278 to 1446 mm. But this decision entailed a radical reconstruction of the all-terrain vehicle. By car, we had to change the mount of the muffler, modify the frame, after which the modifications began to crumble one after another - each of them entailed a new one. For example, at the suggestion of the designer B. T. Komarovsky, who was responsible for the creation of the body, special exhaust slots (“airs”) were made at the back of the bonnet.

The shortened base of the car compared to the GAZ-61 allowed to abandon the rear intermediate propeller shaft. Front open cardan was equipped with needle bearing hinges. In order to facilitate overcoming the vertical walls and increase the front entry angle to 75 degrees, the front axle of the vehicle was suspended on 4's quarter-elliptical springs. In order to achieve a more stable straight motion in the hinges of all the springs of the car, durable and well-protected threaded bushings and pins from GAZ-11-73 were used. The rear springs of the all-terrain vehicle were located above the shell of the bridge. All this significantly increased the ground clearance of the car. Due to chronic shortages and low efficiency, a second pair of shock absorbers was removed from the rear suspension from the car. Due to the increase in the spring track, the need for a rear stabilizer bar is no longer necessary. The production of rear axles from chromedian almost completely eliminated their damage, although it did not prevent it at all. 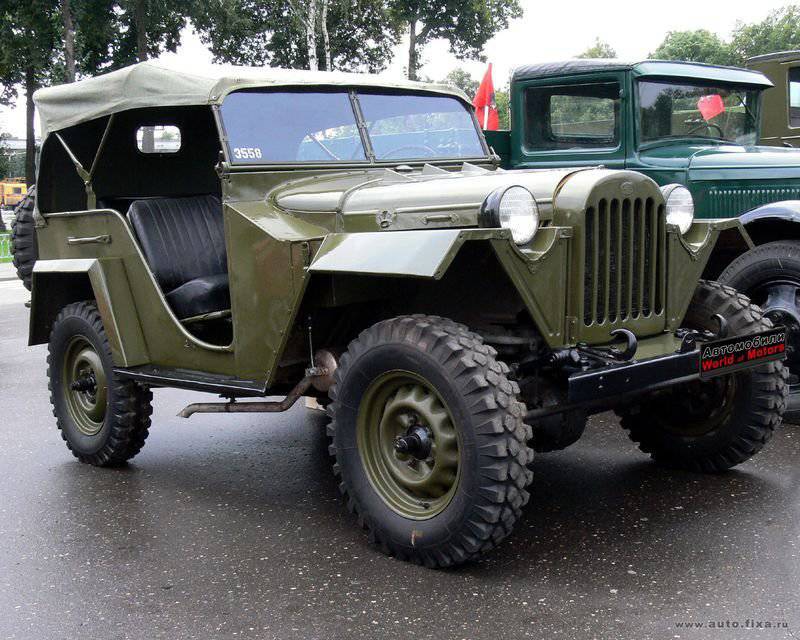 By installing the Stromberg carburetor on the captured carburetor, which was installed on German Mercedes, it was possible to bring the engine's power up to the 54 hp. In the future, the Soviet industry has mastered the production of an analogue of this carburetor, which was called K-23. The air filter was installed from the engine on the left and connected to the carburetor using a pipe. As a result of all these numerous alterations that continued on 2 of the year and were interrupted for the time of the bombing of the Gorky Automobile Plant, a new cross-country vehicle, GAZ-67, was born.

Compared to the GAZ-64, the length of the GAZ-67 has grown insignificantly - to 3345 mm, while the width has increased to 1720 mm, which significantly increased the lateral stability of the machine. In the process of mastering the production of the mass of the machine in curb reached 1342 kg. In addition, because of the increase in width, 29% increased body drag. For these 2 reasons, the maximum speed, despite some increase in power, has dropped to 88 km / h. But then the designers managed to further increase the tractive effort of the wheels, which ultimately amounted to 1050 kg.

The 4-spoke steering wheel with a curved wooden rim with a diameter of 385 mm, which was forced to be mastered in production just 1 day due to the failure of the supplier of carbolite parts - the factory producing them, was destroyed during the air raid. Despite the archaic and unsightly steering wheel, he even managed to get accustomed, and the drivers fell in love with him for the convenience of working without gloves, especially when it was freezing, and were in no hurry to change it to plastic for the occasion. 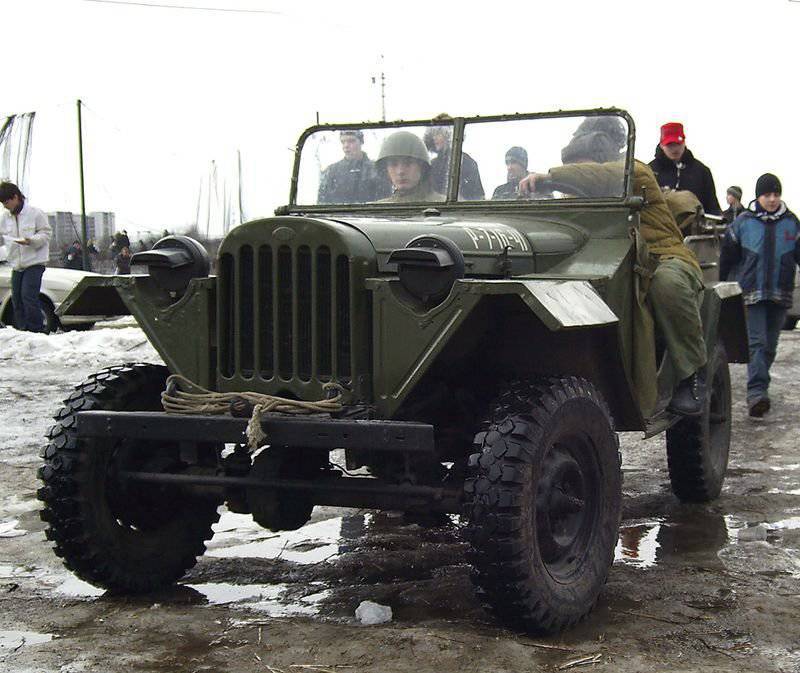 With its appearance, the GAZ-67 resembled a stubborn, well-knit, though unsightly, hard worker who could move along any roads equally confidently, thanks to unusually wide wheels. The car could be used in any weather and on any terrain, which earned it the respect of all the front-line soldiers who came across it. Even after long enough hours of traveling along the broken front-line roads, drivers and passengers of the car did not experience increased physical and nervous fatigue. For the creation of GAZ-67 in January 1944, designer V. A. Grachev was presented for the Stalin Prize.

After the war, the release of this machine was not only preserved, but also significantly expanded. The car was actively used by civilian services, the representatives of the national economy liked it very much, for many chairmen of collective farms, agronomists and mechanics of the MTS the “gas” was the most desirable machine. Before the war, such machines in the country's agriculture simply did not exist. The car was sold throughout the country and sold well abroad, even to Australia, not to mention the countries of Eastern Europe, North Korea and China. The production of cars grew from year to year until the end of production, and the last car left the production departments at the end of August 1953. In total, almost 93 thousands of cars were collected.

This all-terrain vehicle also belonged to a number of civic achievements. So, for example, a light version of the GAZ-67B was able in the spring of 1950 to successfully climb Elbrus to the Shelter of Eleven. In the summer of the same year, the GAZ-67B car was delivered to the SP-2 drifting polar station by plane. On the ice, this car was used for a long time and effectively as a tractor and transport vehicle. The first parachute landing in the history of Russian aviation it was also necessary for the GAZ-67B car, in 1949 the car was landed in this way from a Tu-2 aircraft. In anticipation of its transportation, the Mi-4 helicopter was also developed at one time.

Ctrl Enter
Noticed a mistake Highlight text and press. Ctrl + Enter
We are
Bitter "Wax": Bryansk-wheel drive vehicles that did not go into the seriesGAZ-67B - one of the symbols of the Great Patriotic
18 comments
Information
Dear reader, to leave comments on the publication, you must to register.