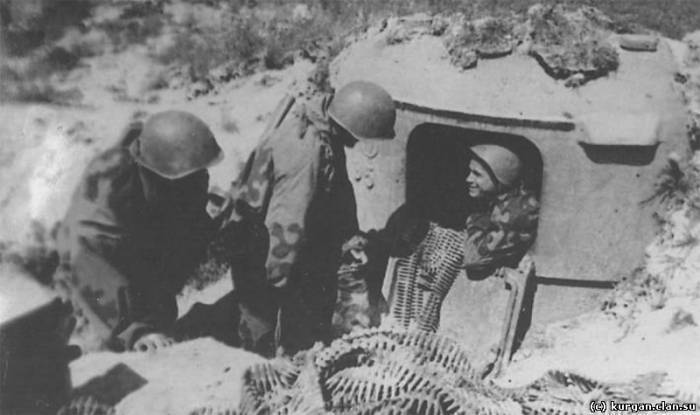 The enemy firing point is captured. 1944

In the battles on the Bryansk, Kharkiv and other directions, our units captured a mobile armored one-brilliant machine-gun point.

The armor point consists of the upper cast armored cap, to which the lower part is welded, which is buried in the ground. The main dimensions of it; height 196 cm, maximum width 162 cm, length 172 cm, thickness of the armor cap from 140 mm in front to 40 - 25 mm pa boards in the coating. The lower part is welded; Made from sheet metal armor 10 mm thick. News over 3 t. 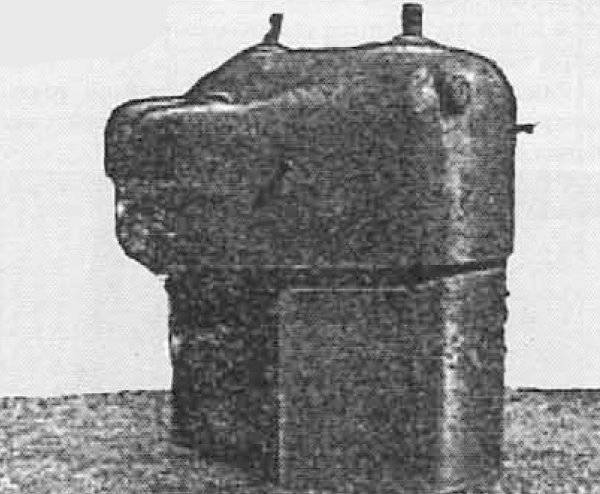 The design of the mobile armor point and its dimensions are shown in the figure. 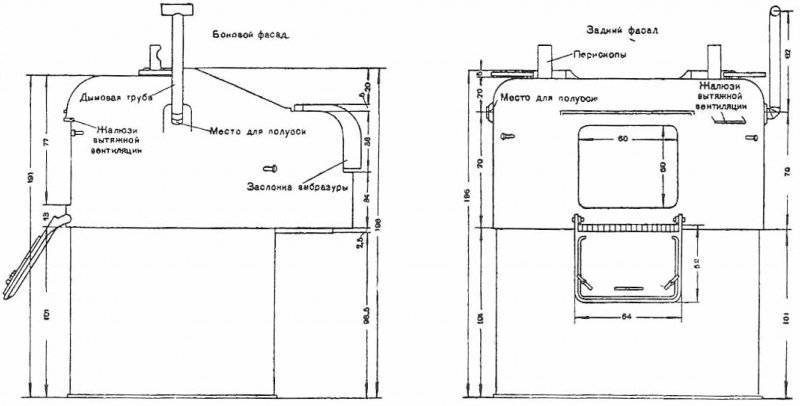 The firing point is armed with ONE heavy machine gun, which is attached with a special machine to the walls of the hood and has two sets of runners for the MG-42 or MG-34 machine gun. Observation is carried out with the help of periscopes, usually two-mirrors.

The point is maintained by two machine-gunners - one shoots, the other observes the battlefield. Horizontal sector of firing of a firing point near 60 gr., Vertical +/— 12 gr. The frame of the machine moves along the segment that has divisions: the left - from 0 to 500 (black) and the right - also from 0 to 500 (red). The grading of the segment corresponds to the grading of the arc of periscope rings. When mounted on a machine gun and periscopes are directed by the director.

The firing point is equipped with a suction ventilation unit. The fan is activated by pressing the foot on the pedal. There are a total of two pedals located opposite the seats, so that each calculation number can power them. Suction of air occurs through the air duct in the upper part of the cap and. in addition, from a machine gun on a flexible hose, diverting the spent cartridges to the collection box. Air exits through a special vent located to the right of the entrance. In addition, through a special hose with throttle air is directed from the exhaust duct to the furnace furnace.

For heating, the point has a radiator stove under the right seat, heated by wood, peat or coal. To improve heat transfer furnace has three elbows. The outlet pipe goes into the right hole for the axle shafts. 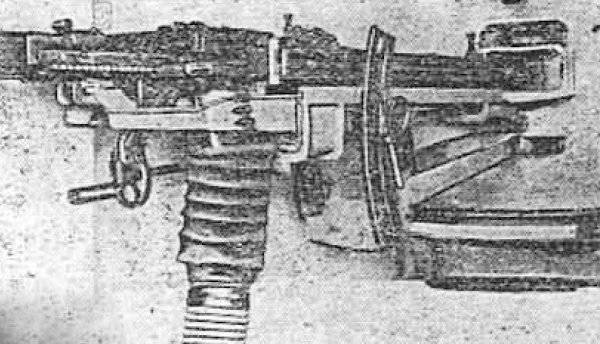 In the middle of the point there is a collection box for the spent cartridges, connected by a special sleeve to the machine gun. The box is connected to the duct with a fan.

Inside the point at the front wall there are horizontal bulkheads (shelves) for placing boxes with machine-gun belts, spare parts and a box with four spare periscopes. Iron floor hood, covered with wooden bars. To calculate the arranged wooden folding seats.

An embrasure of a wholesale point of size 15x9 cm with a transverse membrane dividing it into two unequal parts, is closed by an external valve of cast armor up to 100 mm thick. Opening and closing the embrasure is done from the inside by a lever that is secured with a nut.

The calculation enters the firing point through a manhole, 50 x 60 in size. See the upper part of the firing point on its rear side. The hatch is closed with a door made of cast armor with a thickness of 30 mm, which opens to the outside and is equipped with two locking levers and a bracket. Bracket is used to lift the door with a foot when climbing into the hatch. If desired, the hatch cover opens only partially, for which a chain is used, which is fixed to the wall of the hood. The lower edge of the door has a corrugated part, through the gaps of which, when the suction fan is in operation, air flows into the firing point. 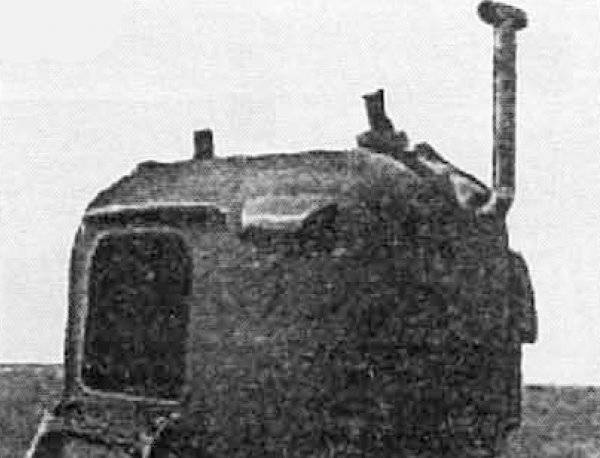 Periscope openings are located in the upper part of the firing point and are closed with 30 mm thick gate valves. These valves are locked and turned with a special lever from the inside point.

Next to the periscope, a leather handle is attached to the firing point dome for the convenience of periscope action.

On the sides, at the top of the firing point, there are two holes for semi-axes that are inserted when transporting a point on the wheels. When installing the point of the wheel are removed, and the holes are sealed with special plugs with holes for the telephone wire.

The firing point is transported upside down on special wooden wheels with a diameter of 120 cm. The axle shafts of the wheels are inserted into special holes and fastened on the inside with nuts that are screwed onto the ends of the semi-axes. The metal drawbar at one end has a ring on which it is attached to the tractor, the other end of the drawbar has a thread on which the nuts are screwed, the drawbar is inserted into the embrasure. The key for screwing in the nuts is to the right of the entrance. A tractor, tractor, or tank serves as a transport force. Travel speed - up to 10 km per hour. 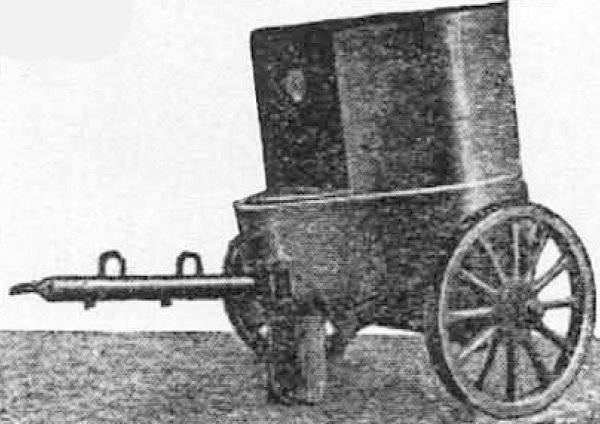 The firing point is prepared for transportation.

Fire from the points can be conducted only in a certain sector. From the flanks and rear, the firing point itself is defenseless in terms of fire and needs the support of neighboring firing facilities. The point is used by the enemy on the front edge of the defense and on the second line of the defensive line. Due to the fact that the observation from the embrasure is inconvenient and the area being viewed is insignificant, when blocking such firing points it is necessary, first of all, to destroy the periscopes with artillery, mortar fire or sniper fire. When the blocking group approaches the firing point, first of all, one should throw the embrasure with sacks of earth, stone or just earth, and then detonate the point with a concentrated explosive charge. In the case of the absence of explosives, it is possible for some time to paralyze the firing point, filling it with the embrasure and manhole. 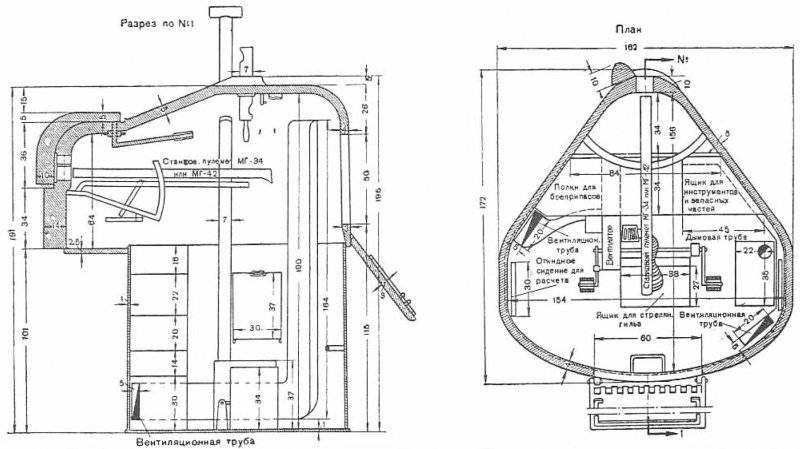 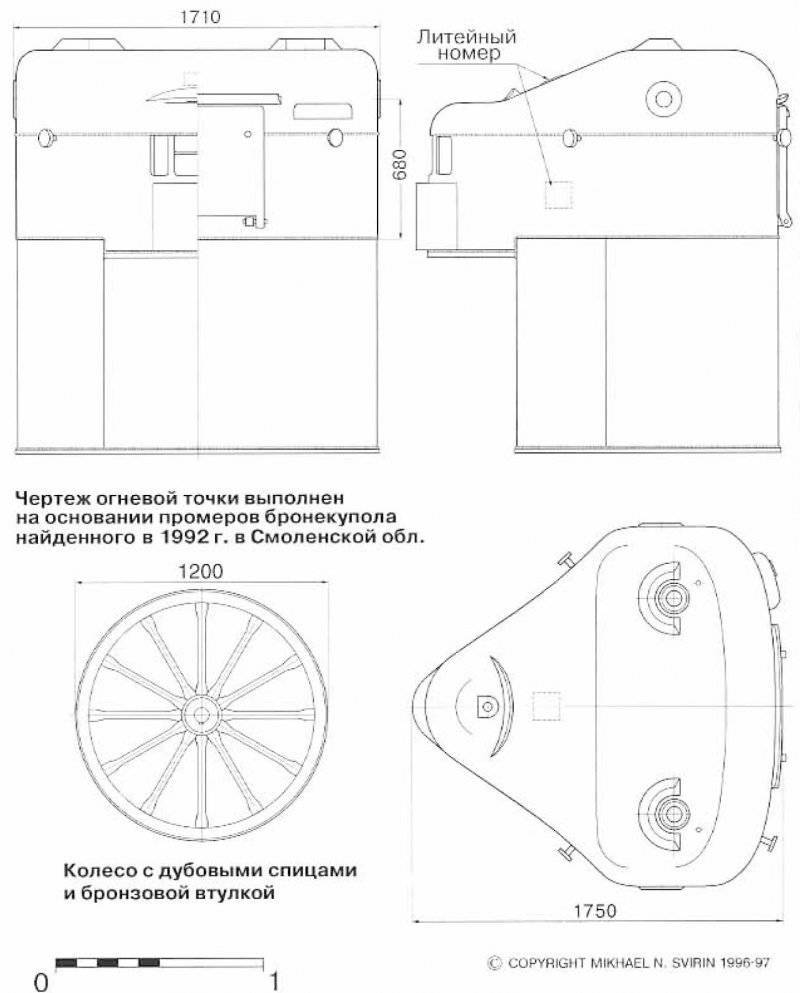 Drawings of the firing point are made by M. Svirin on measurements of the armored cap found in the Smolensk region.

Mobile armor firing point can be used by our troops for hasty fortification equipment of the area. Roughly, it should be assumed that the installation and masking of a similar point, as well as the equipment near the two open additional sites, will be spent by the small unit 4 hours. The firing point may be armed with captured MG-42 and MG-34 machine guns or with our DP manual machine gun, but for this it is necessary to retool the machine at the point. When using a point, you need to create a stock of periscopes (minimum 4 periscope), as well as spare mirrors. It is best to have a firing point of both frontal and flanking action along the leading edge, on the front and on the reverse slopes of the elevations.

In addition, such firing points can be used as advanced observation points.

Ctrl Enter
Noticed a mistake Highlight text and press. Ctrl + Enter
We are
The catastrophe of the Red Army near Vyazma and BryanskRed commanders on the Alley of Mig
15 comments
Information
Dear reader, to leave comments on the publication, you must to register.