“It's time, brothers! Who remained alive - remember my business! ” 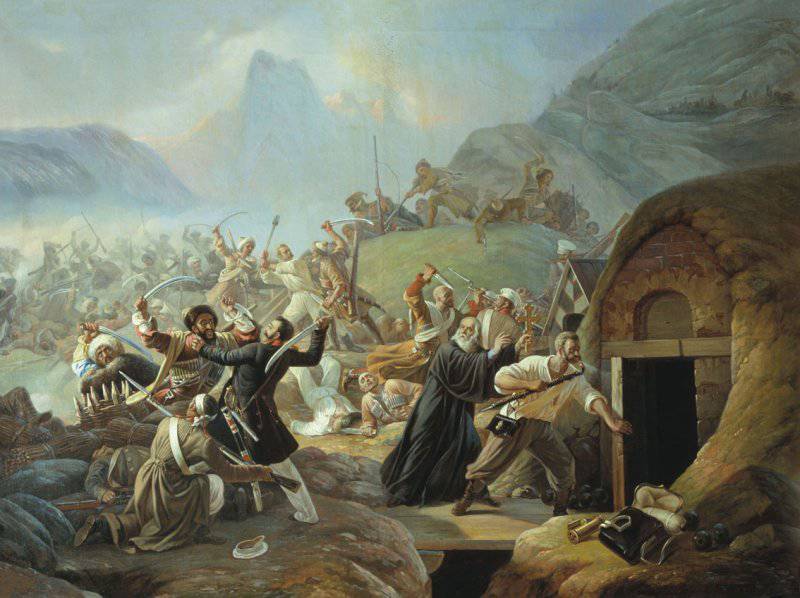 April 3 marks the 173th anniversary of the feat accomplished by the rank and file of the Tenginsky regiment Arkhip Osipov. Unfortunately, this, like many others, the heroic deed of the conquerors of the Caucasus is known today mainly to historians. Meanwhile, knowledge of these events that have occurred, by historical by standards, not so long ago, perhaps it would have forced Russian society and politicians to look a little differently at what is happening in the Caucasus today.


Arkhip Osipov accomplished the feat of 22 in March (old style) 1840 of the year while defending the Mikhailovsky fortification of the Black Sea coastline during the attack of the Circassians on it.

It is appropriate to make a retreat. The resistance of the Caucasian rebels in the nineteenth century was largely fueled from the outside. Turkey, Britain, France financed, armed and instigated the Highlanders hostile to Russia. Turkish ships delivered to the harbor of the Black Sea coast weapon, ammunition and money. Circassian and not only young men and women sold by their fellow tribesmen for the harems of Asia Minor and the Middle East were brought back. This “business” was so widespread and so popular among the highlanders that, according to historians, only the number of Circassian slaves and slaves sold to the Turks exceeded one million! So the Russian authorities in the Caucasus were faced with the task of not only stopping outside assistance to the rebels, but also putting an end to such a disgusting phenomenon as the slave trade. In order to stop relations between the Circassians and the Turks, coastal waters patrolled the vessels of the Black Sea squadron and Cossack rowing flotilla, and in a number of bays where Turkish-Circassian trade was previously carried out, fortifications were built and army garrisons were deployed. One of such forts of the Black Sea coastline was the Mikhailovsky fortification, built at the mouth of the Vulan River in 1837.

We note that the Black Sea coast in those days was not much like today. Service in the coastal fortresses was very harsh. The highlanders actually kept the garrisons of the fortifications in continuous siege. The logging of firewood and hay more resembled combat special operations. There were no roads, and the entire connection with the "big land" was carried out only by sea. During periods of autumn storms, it completely stopped. But the most terrible for the inhabitants of the forts were malaria, scurvy and epidemics of infectious diseases that mowed the garrisons. The autumn-winter period of 1839-40 was especially difficult in this sense. By the spring of 1840, the coastline situation was threatening. In Fort Lazarev, the number of patients was 2000 people, in Navaginsky fortification of 230 people 110 turned out to be sick people, out of two mouths of the Mikhailovsky fortification, only 50 military personnel were healthy. The commander of the coastline, Lieutenant-General Nikolai Rajewski, son of the celebrated hero of World War 1812, literally bombarded the commander of the Black Sea and Caucasian Grabbe lines with reports about the plight of coastal forts and the need for immediate assistance. But in vain.

In February and in March, huge hordes of Circassians attacked the depopulated fortresses, and 4 of them fell: February 7 - Lazarev fort, 27 - Golovinsky fort, February February 29 - strengthening Veliyaminovsky and Tuapse.
On March 22, the fortifications of Mikhailovskoye were attacked by gangs of the Highlanders, who in 20 (!) Were once more outnumbered by the thinning Russian garrison. During these fierce battles, the Russian soldier accomplished his feat. When the enemy broke into the fort, there was an explosion of the powder magazine, set on fire by the rank and file of the Tenginsky regiment Arkip Osipov. The explosion killed three thousand bandits and almost the entire garrison of the fortress. The remains of the garrison (about 80 people) were captured by the highlanders. The order to blow up the fortress together with the enemy was given by the headquarters of the defense headquarters Nikolai Konstantinovich Liko, who was wounded by two bullets during a raid, and then chopped up by a sword. According to some reports, he fell in a fortress, according to others - he was captured in serious condition in captivity, where he died.

On all the bastions of the fortress, the badges of the Circassian knights were already fluttering, the fortification was ablaze - more than a hundred seriously ill soldiers died in the burning hospital. The last fight was at the entrance to the powder cellar. Arkhip Osipov grabbed a flaming smut and with the words: “It's time, brothers! Who will live - remember my business! "- rushed into the cellar. About the feat of Arkhip Osipov learned a few months after almost fifty defenders of the fortress, returning from captivity, under oath, they all confirmed.

“Dooming himself to such a glorious death,” read the order of the Minister of War from 8 November 1840 of the year, “he asked only comrades to remember his case if any of them survived.” This desire Osipova fulfilled. Several brave his comrades who survived among the general destruction and destruction, kept his covenant and faithfully handed him over.
... Arkhip Osipov came from a family of serfs in the village of Kamenka, Lipetsk district, Kiev province. There is no exact data about the time of his birth. According to some sources at the time of the heroic act he was 38 years old, according to others - 40.
Osipov participated in the wars with Persia and Turkey for his long service, for which he was awarded silver medals in 1829. In May 1834, two battalions of the Crimean regiment, including the 5-I musketry company, where Osip served, joined the Tengin regiment.
The sovereign Emperor honored the merits of the valiant defenders of the Mikhailovsky fortifications in their families. To perpetuate the memory of the exploit of ordinary Arkhip Osipov, who did not have a family, His Imperial Majesty commanded the highest to deign to preserve his name forever on the list of 1 grenadier company of the Tenginsky regiment, considering it to be the first private soldier, and in all the rolls, with the demand of that name behind him to the ordinary answer: "He died to the glory of the Russian arms in the Mikhailovsky fortification." He was honored to be the first of the Russian soldiers, whose name was forever credited to the lists of the military unit.

The feat of Arkhip Osipov was devoted to poems and songs. In October, a monument was erected to the hero in Vladikavkaz, later destroyed. But the six-meter cast-iron openwork cross, built on public money in the 1881 year, stands on the site of the blown up fortifications. And in 1876, at the request of residents, the village of Vulanskaya was renamed Arkhipo-Osipovskaya, and to this day, already as an urban-type settlement, bearing the name of a Russian hero.

As a result of Osipov’s heroic deed, the enemy’s losses were so great that Mikhailovskoye was the last fortification captured by him. For the assault of other forts, he no longer had the strength; the morale of the highlanders was greatly undermined by such grandiose losses.

Ctrl Enter
Noticed a mistake Highlight text and press. Ctrl + Enter
We are
Tactics of the Afghan insurgentsOssetian historians against Russian history. About the feat of the soldier Arkhip Osipov
45 comments
Information
Dear reader, to leave comments on the publication, you must to register.