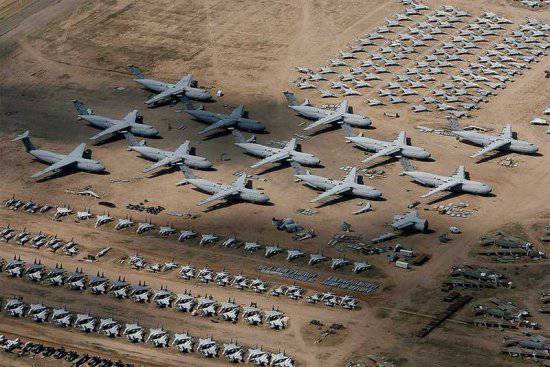 The most expensive, and possibly the largest army cemetery in the world for old equipment is the American Davis-Monthan Air Force Base, or The Boneyard, as locals call this base. "Cemetery", or rather the 309th center of aerospace maintenance and processing (AMARG) - American aviation the base known as the world's largest military aircraft burial ground. Located on ten and a half square kilometers, which is equal to the area of ​​1 football fields, the Cemetery is a collection of more than 430 decommissioned aircraft, including almost all aircraft used by the US military since World War II.

For the first time, high-resolution images of this area appeared in Google Earth, and they demonstrate with stunning accuracy the full range of aircraft presented.
Among them, B-52 - Cold War bombers, written off in 1990 in the framework of disarmament measures under the terms of the negotiations on the limitation of strategic weapons between the US and the USSR. In addition, the photographs depicted dozens of F-14 fighter jets, written off by US naval forces in 2006 and involved in the movie "Top Gun". The center is located at the Davis-Monten air base in Tucson, Arizona and was founded shortly after World War II. The place was chosen due to the high altitude and dry climate, which allowed the aircraft to remain outdoors without devastating consequences.

Each year, about 400 units are deposited, and as many are eliminated (sold to friendly countries or destroyed). This number does not include the air fleet destroyed under separate interstate agreements.

AMARG has more than 4 200 aircraft and 40 aerospace vehicles. As the largest fleet of aircraft, AMARG is also engaged in the renewal of aircraft, returning them the opportunity to take to the air or move on the ground. The total cost of the entire fleet is about 35 billion dollars.

When putting into storage from all machines, weapons and secret equipment are dismantled. Fuel systems are dried and pumped with oil, forming a protective film.

The management of the base informs that each dollar spent on restoration turns around 11 in dollars of income.

Not a single military aircraft cemetery exists in Russia. Here is a vivid example of one of them - the former central airfield named after Frunze, which also turned into a haven for abandoned aircraft.
at the beginning of the two thousandths it was planned that at the site of the former airfield the National Museum of Cosmonautics and Aviation, several hotel and office complexes with apartments, a residential complex, a school, a club of foreign intelligence veterans and park facilities "Historical landscapes of Moscow. "

However, so far only a few residential houses have been built on a huge field. At the same time on Khodynka in the open air there are planes collapsing in time and weather. The MiG-29 and Su-15 fighters, the Mi-24 helicopters and the huge Mi-6, as well as other flight vehicles are protected from the curious only by a netting.

About 22 million rubles are needed for the construction of the museum, of which Moscow is ready to allocate 8 million - but this is not enough and the state does not want to allocate the remaining money, because The project will not be commercial and will not bring any profit.

Once, in the 1922 year, from here for the first time in the history of Russia international flights began on the route Moscow - Königsberg - Berlin, and then in the 23 year, the internal passenger flights Moscow - Nizhny Novgorod. Around are our famous aviation bureau Sukhoi, Mikoyan, Ilyushin, Yakovlev. From here flew Nesterov, Utochkin, Chkalov. In 1938, Chkalov died over this airdrome.

In 1910, the Aeronautical Society created an airfield here, which was built mainly with donations from aviation enthusiasts.

Now this place is a filthy wasteland with dead planes and "elite houses" around. Here they were going to create the Great Museum of Aviation and Space Power of Russia. What was created - can be seen in the photos.

Almost all airplanes have blisters broken, trash is inside, crowds of kids climb on them.
On the field there is a house with security. Security is also there, but it does not interfere with breaking airplanes, although it prohibits photographing.

On one of sites There is a very interesting announcement about the sale of these most abandoned aircraft:

"AVKF" Khodynskoe field, offers written off military aircraft and helicopters. For the creation of: monuments, steles, promotions, for the filming of movies and any other purposes. All documentation is available.