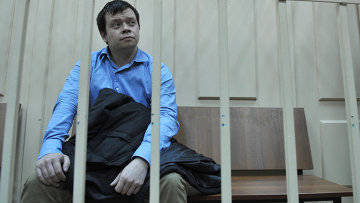 We are talking about Konstantin Lebedev, who is accused of that, together with Razvozzhaev and Udaltsov, he was going to make unrest for the money of Georgian politician Givi Targamadze.

An activist of the “Left Front” confirmed to the investigators that the videotape of the conversation of the Georgian politician Givi Targamadze with the Russian oppositionists is real, said lawyer of Konstantin Lebedev Valery Lavrov.

Lebedev pleaded guilty and filed a motion to consider the case in a special order. The investigation believes that last May 6 on Bolotnaya Square in Moscow, Konstantin Lebedev together with Sergei Udaltsov, Leonid Razvozzhaev and Givi Targamadze organized mass riots using violence against a government official.

According to Lente.ru, lawyer Valery Lavrov, the court will consider his case in a special order. In accordance with the Code of Criminal Procedure of the Russian Federation, a special procedure for the consideration of a case is appointed when the defendant is found guilty. When considering the case in a special order, the court does not examine the evidence; while the accused can get no more than two-thirds of the maximum term provided for by the Criminal Code of Russia. Sergei Udaltsov believes that Konstantin Lebedev "showed inadmissible weakness and framed his comrades."

According to him, Lebedev "made a deal with the investigation and incriminated himself in the hope of a mitigation of punishment."

“I don’t know that it was possible to admit that there was a guilt, because there wasn’t such a mass riot,” Leonid Razvozzhaev’s lawyer Alexander Denisov told Lente.ru.

Whether or not the confession of guilt is reflected in the case of his client, the lawyer could not say, because he does not know what evidence Lebedev gave to the investigation. The case of the preparation of mass riots in the Russian Federation was filed in the fall of 2012, after the release of the program “Anatomy of Protest-2”, in which the recording of the meeting of Lebedev, Razvozzhaev and Udaltsov with Targamadze was shown. According to investigators, the talks were held in June 2012, in Minsk.

All prospective meeting participants deny their participation in it. Subsequently, the case on the preparation of riots combined into one production with the "swamp affair", which at that time had already been investigated for several months. At the last meeting on the extension of the arrest of Leonid Razvozzhaev - 29 March 2013 of the year - the investigator said that the Investigative Committee of the Russian Federation considers Razvozzhaev, Udaltsov, Lebedev and Targamadze to be the organizers of the unrest on Bolotnaya Square on May 6. Officially they are not charged with this.

It seems that the opposition was bored with the "romance of protest." "Revolution", as it turned out, is not at all such a merry affair. It's one thing to get money from Western curators and PR on TV, and quite another, to be responsible for your actions. As you can see, soon we will witness, handing over each other in a race, our "oppositionists". And this, in turn, completely ruin the already degraded movement of "disgruntled citizens." However, who would doubt ...

Ctrl Enter
Noticed oshЫbku Highlight text and press. Ctrl + Enter
We are
A great interview with Sergey Lavrov: about Ukraine, Obama and IranWhat you didn't want to know about England
54 comments
Information
Dear reader, to leave comments on the publication, you must to register.