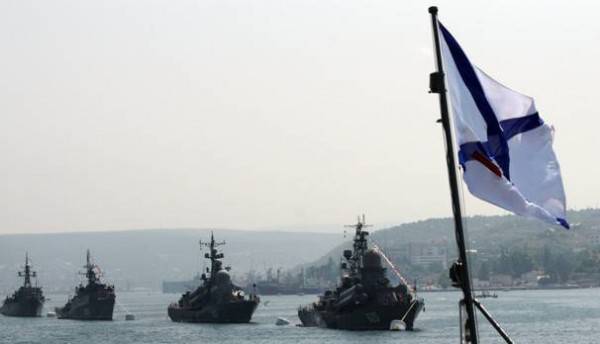 After his participation in the BRICS summit, held on 28 in March 2013 in South Africa, Russian President Putin ordered to conduct military exercises on the Black Sea. At his command, warships advanced from the Ukrainian Sevastopol Bay. It was reported that three-day maneuvers in the Russian territorial waters involved 36 warships and over 7 thousands of servicemen. Presidential spokesman Dmitry Peskov said that, based on international practice, prior notification of the Black Sea coastal countries about the exercise was not considered necessary, as the number of troops did not exceed 7 thousand.


Peskov explained that the purpose of the exercises was to strengthen the military power of the Navy fleet Russia, using the following wording: "The goal of the largest training exercises of all time is to test the capabilities of our fleet in fulfilling tasks in the event of war." Indeed, after the August 2008 war, discussions broke out in Georgia on the modernization of the Russian army. However, according to some analysts, after the Georgian war, the weakness of the Russian army, which intended to maintain control of the former Soviet region, became apparent.

Last month, the Russian army conducted unscheduled military exercises in which the armed forces participated in the central and internal parts of the country. The chief of the General Staff of the Armed Forces of Russia, Valery Gerasimov, noted that thanks to these exercises, a number of system errors and omissions in the army were identified. It can be stated that Russia and Putin are acting in accordance with the continuity of previous responses and making significant investments in terms of military spending and the modernization of the army. In addition, for the modernization of the army over the next 10 years, Moscow has formed a budget of 600 billion euros. Also, recent exercises are intended to be a showcase of the revived appearance of the Russian army, which has been criticized for its inefficiency during the war in Georgia.

Reflection of the Black Sea military exercises in the Mediterranean region

As if recalling this, in the past month because of the conflict in Syria, Moscow made a decision on the permanent presence of combat ships in the Mediterranean Sea, and this decision caused heated debate. Some experts described the Kremlin’s decision as “a step for Russia to return to the Mediterranean Sea”, while other authors noted that “Russia does not have the strength to keep ships here”. The decision to conduct military exercises in the Black Sea, taken on board the aircraft on the way from the BRICS summit, thus sends a message that the army and armed forces of Russia are strong enough to protect its geopolitical role and are ready for possible military scenarios.

In the current situation of civil war, which has been progressing for more than two years, the desire to prevent foreign intervention is laid at the heart of Russian foreign policy. Moscow, which has set a goal to implement a plan to sit around the same table through political dialogue in Syria, supporters and opponents of the regime, abides by the terms of the Geneva Agreement, signed after the June 2012 meeting, and intends to bring the positions of international actors to a common denominator.

When the 13 of February of the 2013 of the year of the Arab League countries met with Russian Foreign Minister Lavrov, they compromised, agreeing that the regime representatives and his opponents would negotiate. However, the fact that at the recent Arab League summit the Syrian revolutionary and opposition forces Muaz al-Khatib was given an empty seat for Syria’s revolutionary coalition indicates the futility of Russia's attempts to evaluate them in the context of the diplomatic isolation of the Al-Assad regime. Representative of the Russian Foreign Ministry Alexander Lukashevich expressed his opinion that the decisions made by the Arab League are contrary to a common understanding of the need and ways for a peaceful political settlement in Syria, which, in particular, takes place in the framework of the Geneva Agreement of the “Action Group” on Syria from 30 June 2012. .

In addition to providing Syria with an empty seat at the summit of the Arab League, to the opposition leader, the attention of the Kremlin in the presence of subjects, both global and regional, is attracted by the attempts of Britain and France to lift the EU embargo on arms supplies to Syria. Moreover, it was emphasized that according to the concept of foreign policy, revised and published last month, Russian foreign policy activity will focus on the elements of “soft power”; it is obvious that the elements of "hard power" will in fact retain their rigidity, at least in the short term. Similarly, Moscow relies on economic and military power to be an "influential subject of international relations", bearing in mind the bitter memories of the real experience of the Balkans of the 1990's. and the inability of Russia at that time to prevent unilateral initiatives of Western countries. From this point of view, Russia, for which being part of the solution to the Syrian crisis is just as important, considers it possible, at the request of the “great power,” to negotiate with both the US and the members of the EU and NATO.

Ctrl Enter
Noticed oshЫbku Highlight text and press. Ctrl + Enter
We are
Situational analysis of the death of the MH17 flight (Malaysian Boeing 777), made on the basis of engineering analysis from 15.08.2014BRICS: friendship against the dollar
Military Reviewin Yandex News
Military Reviewin Google News
42 comments
Information
Dear reader, to leave comments on the publication, you must to register.