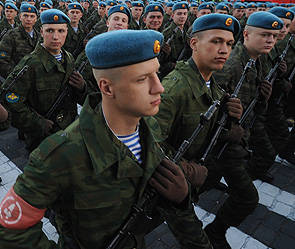 The Russian airborne troops took into account the experience of the armed conflict in the Caucasus in August 2008, and began to more actively use unmanned aerial vehicles, ordered a new weapon and decided to strengthen the sniper training parachutists. This information was provided by the Commander of the Airborne Forces Lieutenant-General Vladimir Shamanov.

“In almost all the exercises, we try to take into account the experience gained during the five-day war,” said the head of the paratroopers. He noted that "blue berets" are increasing in the number of all-weather and sniper weapons. "We are now in the military units conducting training in the sniper sector," Shamanov assured. He clarified that the shooters from reconnaissance companies received weapons with improved optical properties and day and night applications. "Some of them are equipped with Sahin thermal imagers," the general said . He said that 10 airborne snipers received special training on a new base and turned into a "gold reserve."

The use of guided parachutes has become another important area of ​​training for blue berets. "During the winter period of training, we first used a paratroop of special forces parachute on guided parachutes, allowing you to move in a horizontal position at a distance of 20-30 kilometers. This is a very promising direction, but in this area we need to catch up with the Israelis, who travel 40 kilometers," - said Vladimir Shamanov.

In addition, the paratroopers will begin training abroad. In particular, in the framework of cooperation between Russia and NATO, military internships are planned in the United States and Germany. "At the same time, we are not obsessed with ourselves and are ready, on the basis of cooperation, to receive our foreign partners if the relevant instructions of the Minister of Defense are received," the commander of the airborne forces said. He also noted that the paratroopers formed five battalions of prime use, staffed by military personnel with combat experience. “One of the units of these battalions is currently performing the task on the territory of Kyrgyzstan,” Shamanov recalled.

Turning to the situation with the equipment, he said that the airborne forces are selecting for themselves a qualitatively modified combat vehicle. “We are considering a large number of proposals and have already looked at such cars as the Tiger, Buggy, Iveco,” RIA reports. News words of the general.

Shamanov also noted that the paratroopers tested the BMD-4, a lightly armored amphibious vehicle that can be deployed on airplanes. At the same time, it is equipped with a 100 mm cannon capable of hitting enemy armored targets. "And using a 23 mm gun and reflect the attacks of the main aircraft of the assault and army aviation potential adversary, "said the commander of the Airborne Forces. He pointed out that the BMD-4 can be used not only by paratroopers, but also by parts of the marine corps and light brigades of the Ground Forces.

Speaking of air technology, Vladimir Shamanov spoke in favor of the active use of unmanned aerial vehicles. He said that the "blue berets" have experienced domestic samples, and also began training with the Israeli "Hermes". This interest was explained by the general experience of hostilities in the Caucasus. “When we were in Abkhazia, Hermes hung above us, it was very unpleasant. The Igla MANPADS couldn’t take it because of its small size, and the BMD-2 anti-aircraft gun did not reach the drone’s height” - explained Shamanov. He also stated that the General Staff supported his request for the establishment of front-line formations in airborne units. In addition, the general said that the Ministry of Defense intends to purchase An-70 and An-124 Ruslan aircraft.

Vladimir Shamanov also expressed the opinion that the interest of the military department in foreign products revived the national defense complex. At the same time, the general admitted that he had mixed impressions while visiting Russian enterprises. “When people declare that they are ready to produce weapons of the 21st century, and their equipment is 30-40-ies (of the last century) - which 21st century can we talk about?” The general emphasized. “Therefore, every official supports Vladimir Vladimirovich’s initiative the need to upgrade weapons. "

At the same time, Shamanov pointed out that not all foreign armaments are superior to their domestic counterparts. In particular, lightly armored GAZ cars showed themselves better than Iveco cars, while Russian snowmobiles were more adapted to combat missions than Canadian ones. In this regard, the commander of the Airborne Forces stated that it is necessary to carefully watch "who does what, and without any kind of" lobbying "to decide what to purchase." "My main task is to preserve the life of a soldier and accomplish a combat task," the general concluded.