The largest helicopter in the world. Mi-26

April 12 2013
21
Welcome aboard the world's largest commercially available helicopter.
You'd be surprised, but if you put it next to a Boeing 737 airliner, it will be longer! And the diameter of the screw on the whole 4 meter is greater than the wingspan of the classic series of Boeing 737.

This flying monster can be compared to an ant. Because it is one of the few aircraft capable of lifting and carrying a load almost equal in weight to itself. And not only to lift, but also to transport these 20 tons of cargo to the hell out of place - up to 800 kilometers from the base.
Developed back in the middle of the 70, this goliath-hard worker is still being produced in various modifications - like a military transport, passenger, civil transport, flying crane, medical, etc.
310 units MI-26, released over the years, are used in the military and civil service in various countries - Russia, Kazakhstan, Ukraine, Venezuela, India, China, and even in Laos and Peru. 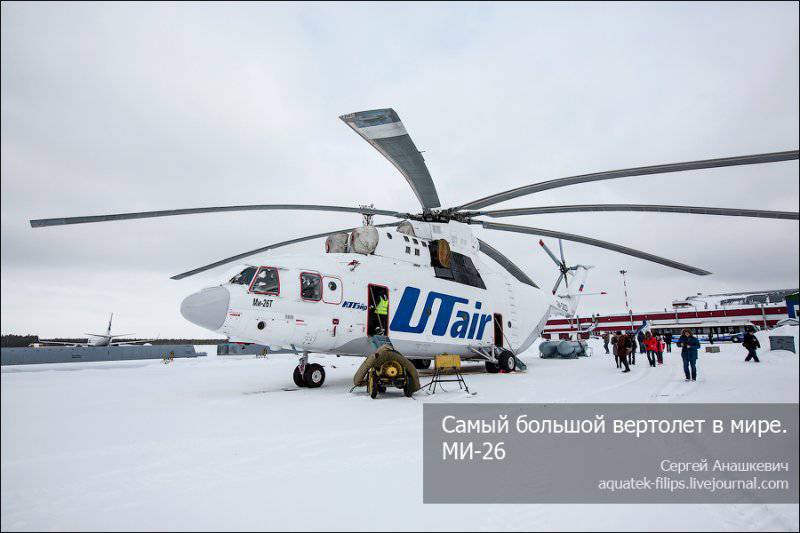 The heavy helicopter MI-26 began to be developed at the beginning of the 70-ies as a replacement for the then-record holder MI-6. The need to develop a new model was conditioned by the growing needs of both the Armed Forces of the USSR and the Soviet national economy. According to the requirements, the new helicopter was supposed to transport cargo weighing up to 20 t over a distance of more than 500 km, and also to perform military and civilian tasks without any problems at altitudes more than 1000 meters above sea level.
The heavy helicopter of the new generation received the designation Mi-26 (or "90 product") and its advance design was approved by the scientific and technical council of the MAP of the USSR in December 1971. OV was appointed the lead designer. Bach.
The construction of the Mi-26 model began in 1972, and three years later it was adopted by the State Commission. By that time, most of the work on the design of the machine was completed. In the same 1975, V. Shutov became the new lead designer for the Mi-26.
14 December 1977 r MI-26 first took to the air, spending about 3 minutes in the sky. The car was driven by a crew headed by the leading test pilot of the company G. R. Karapetyan.
The first MI-26 went straight to the USSR Armed Forces, and only a few years later began to appear civilian modifications of this heavyweight

MI-26T with the tail number RA-06031, on the example of which today's story was prepared, was released 1 August 1990. At first, Aeroflot USSR acted as the company-operator, as a part of which it was operated for three years in Tyumen and Nizhnevartovsk. Then, with 1993 long 17 years, the helicopter was in a mothballed state in Krasnoyarsk, until in 2010 it was acquired by UTair, which now operates in the Khanty-Mansiysk Autonomous Okrug of Russia. The place of permanent base is the airport of Surgut. 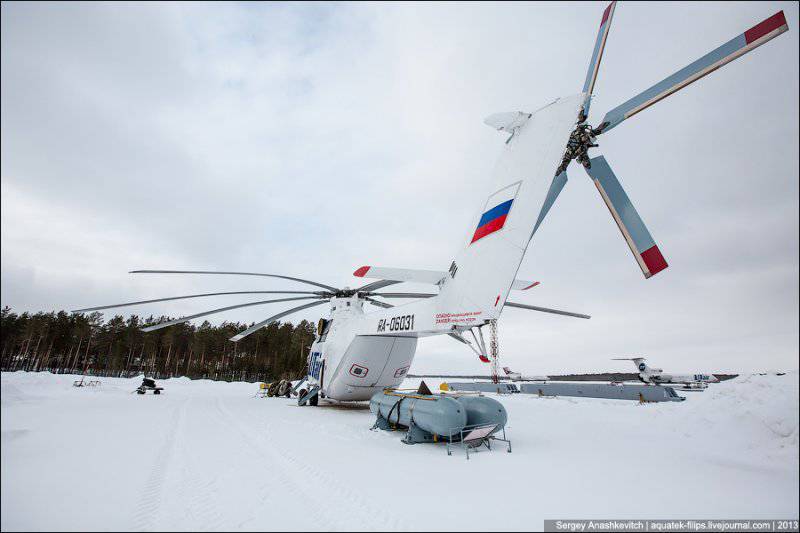 The civilian version of the helicopter, designated Mi-26T, was put into mass production on January 12 1985. The demilitarized version differed from the military counterpart primarily with navigation equipment - it did not install LTC ejection devices and pivots weapons. The equipment was significantly expanded to increase the machine’s ability to handle loads on an external sling.
The helicopter was equipped with an external suspension system that was able to transport standard sea containers without the participation of scaffold gear. The universal stabilizing platform allowed to increase the speed of transportation of large and long loads (such as houses, containers, pipes) on the external sling to 200 km / h and reduce fuel consumption by 30%. In addition, the MI-26T arsenal included an automatic pipe grip for working with large-diameter pipes and a load gripper for transporting wood in mountainous areas. 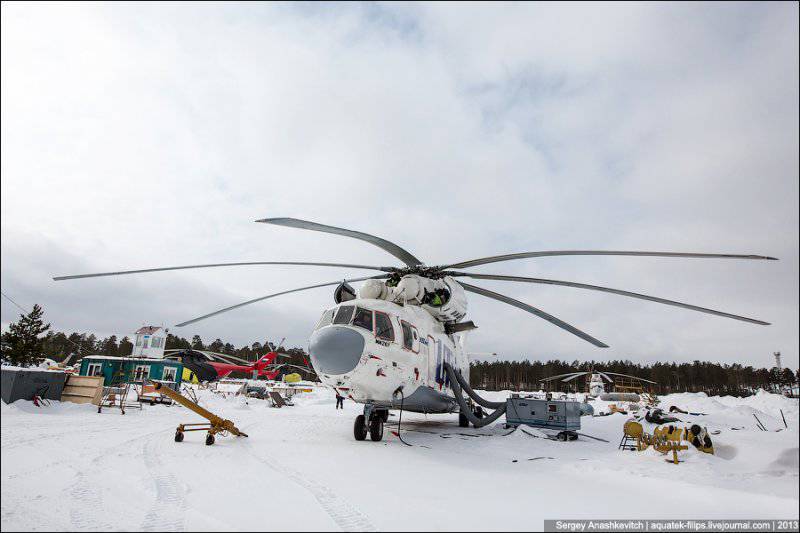 Interestingly, even before the Mi-26 entered the Armed Forces and Aeroflot in large numbers, a number of world records were set. For example, 4 February 1982, the crew of test-pilot GV Alferov performed a flight in which 25 tons of cargo were able to lift to a height of 4060 m, while the helicopter climbed 2000 m with a flight weight 56 768,8 kg, which was also the highest world an achievement. In the same year, the crew of the Mi-26, led by Irina Kopets, set the 9 women's world records. When the machine was already in full use in combat units, military testers broke another record set on the Mi-8 as early as 1967. 7 August 1988 The crew of 1-class test pilots A. Razbegayeva, A. Lavrentyev, deserved Test navigator L. Danilov and flight engineer A. Burlakov passed along the closed route Moscow-Voronezh-Kuybyshev-Moscow with a length of 2000 km with an average speed of 279 km / h. And at the final stage, the helicopter pilots had to overcome the meteo-front with a strong bump and heavy rain. 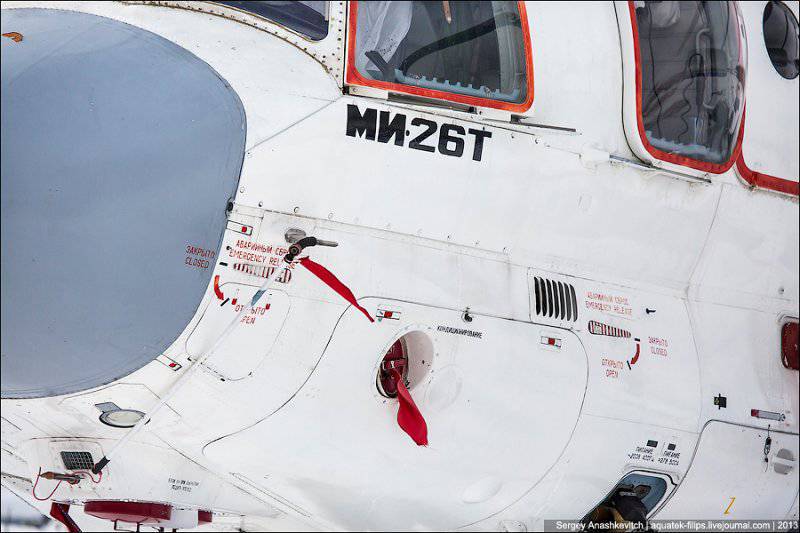 The Mi-26T began to arrive at Aeroflot in 1986. The first instance arrived at the Tyumen airline after tests at the State Research Institute of Civil aviation. At first, civilian pilots were retrained at the Rostov Plant, and since 1987 - at the Kremenchug Civil Aviation School. This educational institution received two Mi-26s, which until the end of 1989 trained hundreds of commanders, co-pilots, navigators, flight engineers and flight operators. After the helicopters flew off an overhaul resource, they were sent to Konotop Repair Plant, where they are still located. 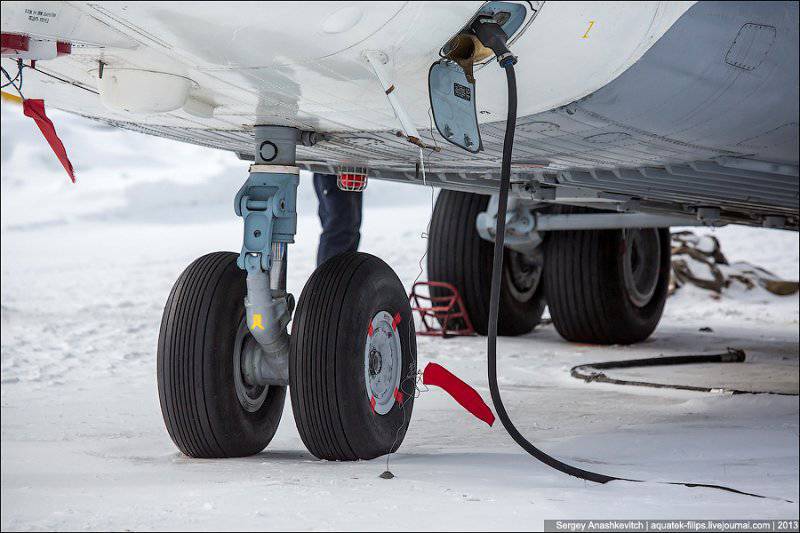 The central part of the MI-26 fuselage is occupied by a spacious cargo compartment with a rear compartment, which passes into the tail boom. Cabin length - 12,1 m (with a ladder - 15м), width - 3,2 m, and height changed from 2,95 to 3,17 m. As confirmed by mock tests, cabin dimensions allowed to transport all types of advanced military equipment with a mass up to 20 t, designed to equip a motorized rifle division such as an infantry fighting vehicle, a self-propelled howitzer, an armored reconnaissance vehicle, etc. Loading equipment was carried out under its own power through the cargo hatch in the rear fuselage, equipped with two drop-down side flaps and a descending ladder with subtrain. Control the ladder and sash - hydraulic. 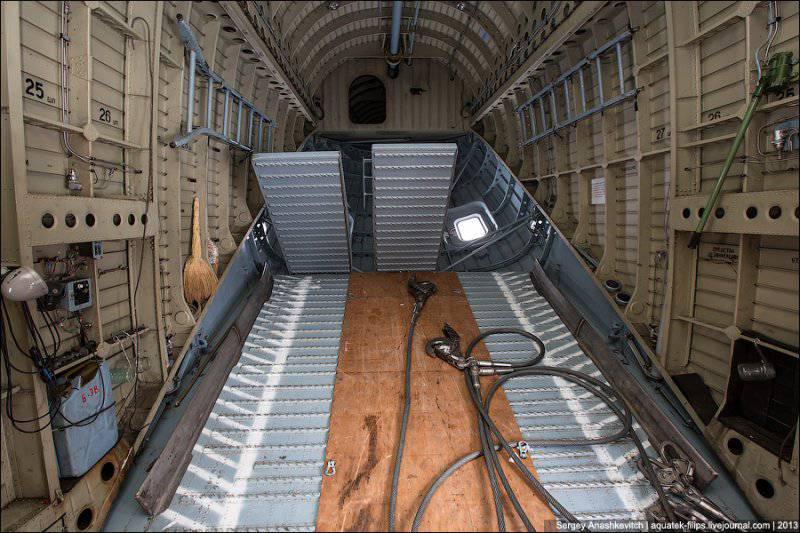 In the landing version of the Mi-26 transported 82 soldier or 68 paratroopers. Special equipment allowed for several hours to turn the helicopter into an ambulance for the transport of 60 injured on stretchers and three accompanying paramedics. In the civilian version of the rear compartment allows you to transport equipment or any goods. In addition, oversized cargo weighing up to 20 t can be transported on an external sling. Its units were located in the design of the power floor, so that no disassembly of the system is required when transporting goods inside the fuselage.
The cargo compartment of the helicopter, in addition to cargo, also allows the placement of additional fuel tanks (in the photo), thereby increasing the possible range of the MI-26. 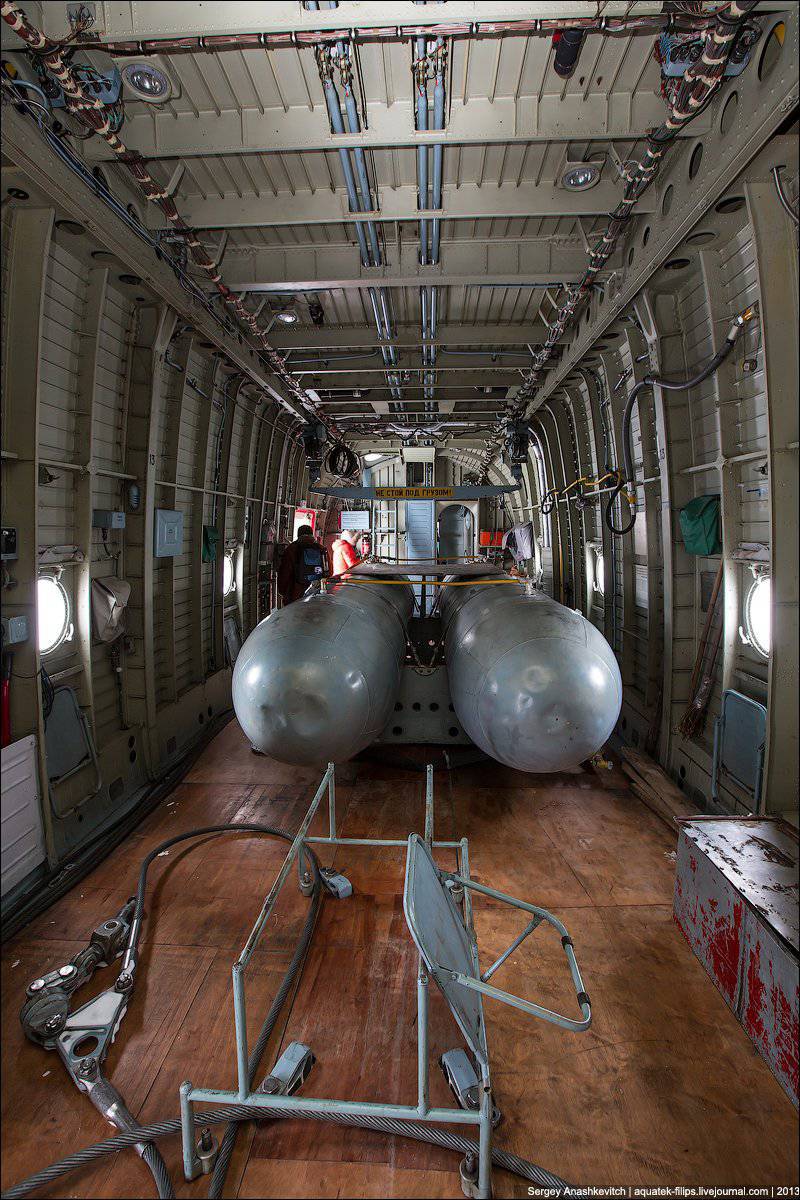 The inner part of the cargo compartment is equipped with a set of equipment necessary for the placement and fixation of goods - crane beams, hydraulics, etc. 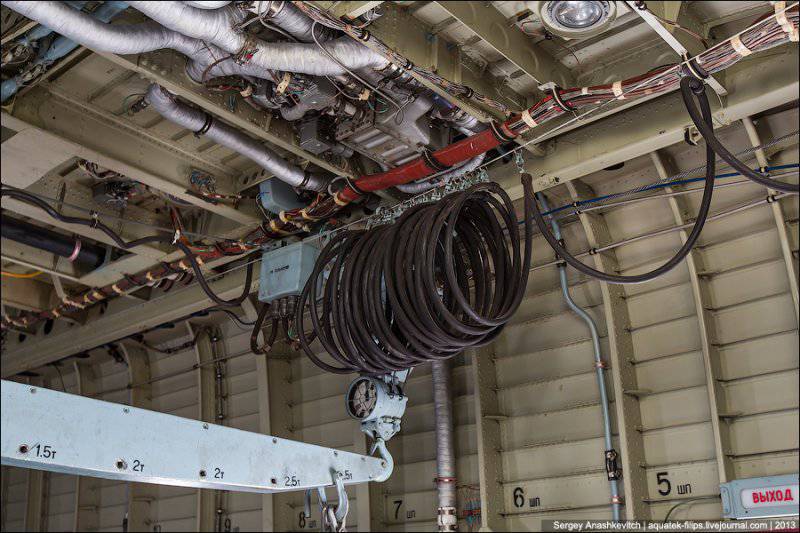 When used for civilian purposes, the opportunities of the Mi-26 for the delivery of oversized cargo on the external sling fell on hand. Many operations have become unique, have gained wide popularity in the world and the most favorable impact on the reputation of the helicopter. One of the first is the transportation of a glider Tu-1986Sh weighing about 124 from the Chkalovsky airfield to the territory of the town Shchelkovo-18, carried out by the crew headed by S.Sugushkin in the winter of 2. In 1988 in the Caucasus, the Mi-26T helicopter of the Kremenchug School, which was piloted by the commander O.V. Marikov, raised an emergency landing in the mountains at the height of 3100 and Mi-8 and delivered it to Tbilisi. Also known is the operation to evacuate the Be-12 aircraft from an emergency landing site in the north of the Rostov region to Taganrog.
Similar operations were carried out abroad. Thus, in October 1994, the crew of the Ukhta civil aviation squadron led by A. Fateev during an expedition to Papua New Guinea, performed an interesting job in October 26. The airmen were ordered to pull the American "Boston" out of the swamp and transport it to the port of Manang. The aircraft during the Second World War was part of the US 13-th bomber squadron, was shot down by the Japanese in 1945 and made an emergency landing on the "belly" and was now intended for the Australian Air Force Museum. 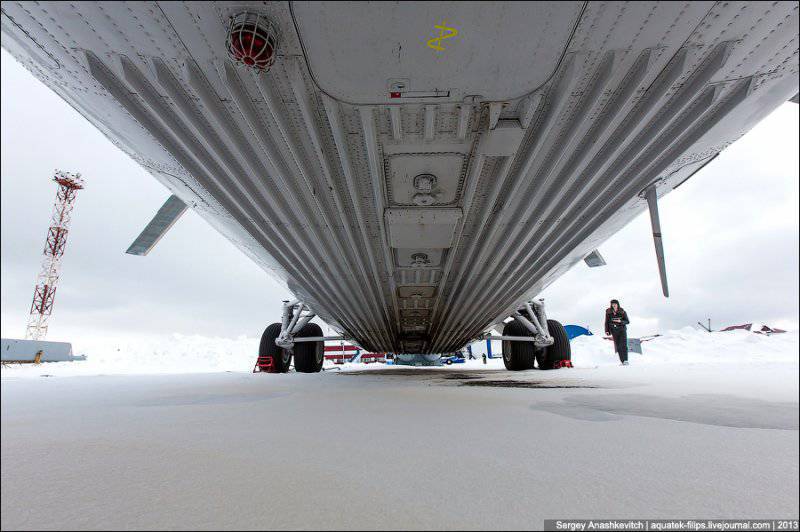 In the cockpit of the pilot MI-26

In the nose of the Mi-26 fuselage there is a crew cabin with the places of the commander (left pilot), right pilot, navigator and flight engineer, as well as a cabin for four people accompanying the cargo, and the fifth crew member - flight mechanic. On the sides of the cockpit, there are provided hatches for the emergency escape of the helicopter, as well as armor plates in the military version of the vehicle. 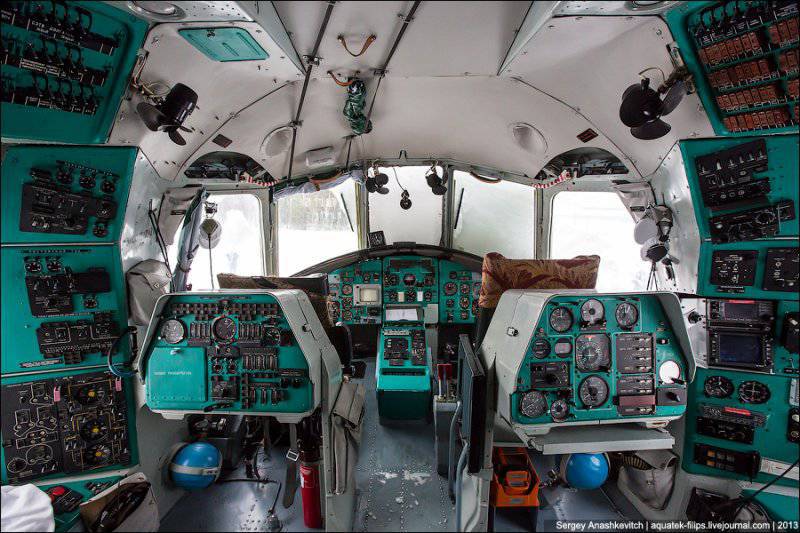 Electronic and navigation equipment of the helicopter allows you to perform combat missions in difficult meteorological conditions and at any time of the day. The navigation complex included in its structure includes the combined course system “Comb-2”, the flight control unit PKP-77М, the radio-electronic near-navigation system “Veer-M”, the radio altimeter, automatic radio compasses and the Doppler velocity and drift angle meter.
The flight complex of the PKV-26-1 helicopter consists of the four-channel autopilot VUAP-1, the trajectory control system, the director control and the damping of the load on the external suspension. The helicopter is equipped with a meteorological equipment, communications, as well as television equipment for visual observation of the condition of the cargo. 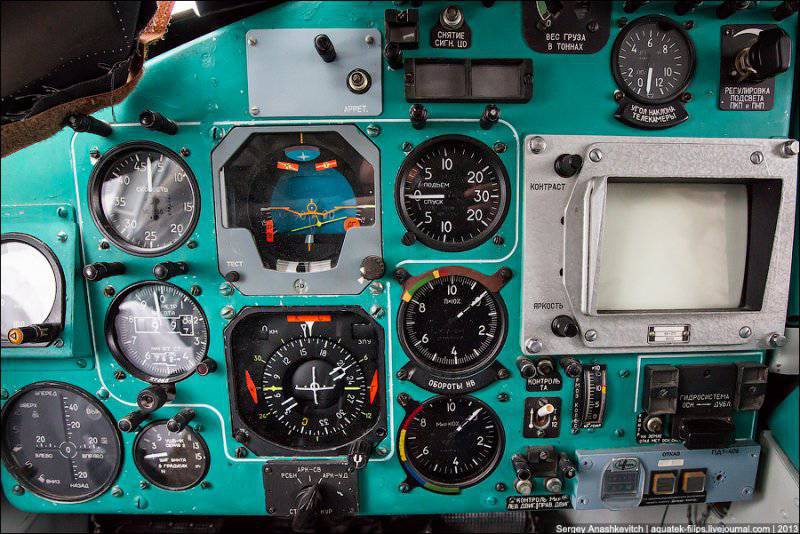 22 thousands of horses and 120 meters of blades

The power plant MI-26 consists of two turboshaft engines D-136 produced by Zaporozhye plant Motor Sich with a total power of 22 thousands of horsepower.
These engines allow you to lift an 28-ton car with 12 tons of fuel and 20 tons of cargo to a height of up to 6,5 thousand meters and move it to a distance from 800 km (fully loaded) to 2350 km (at the stretch).
The engine consumes up to 3100 kilograms of fuel per hour, and the cost of the flight hour is about 600 thousand rubles. 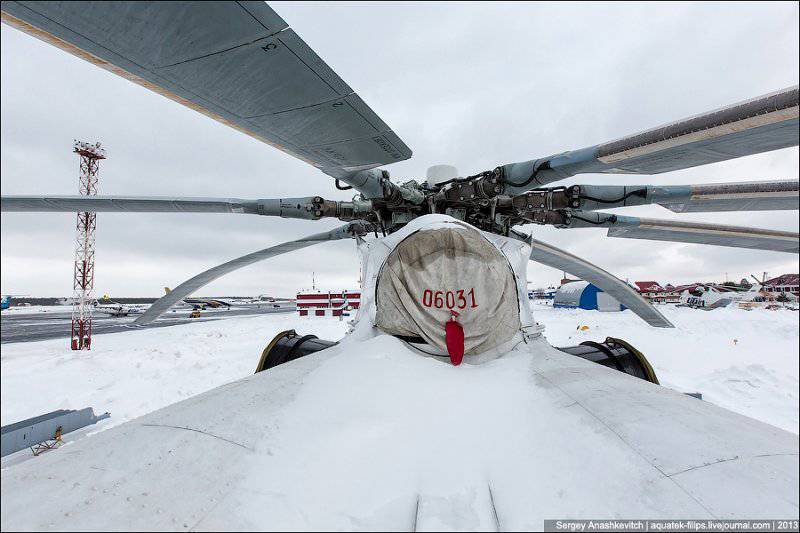 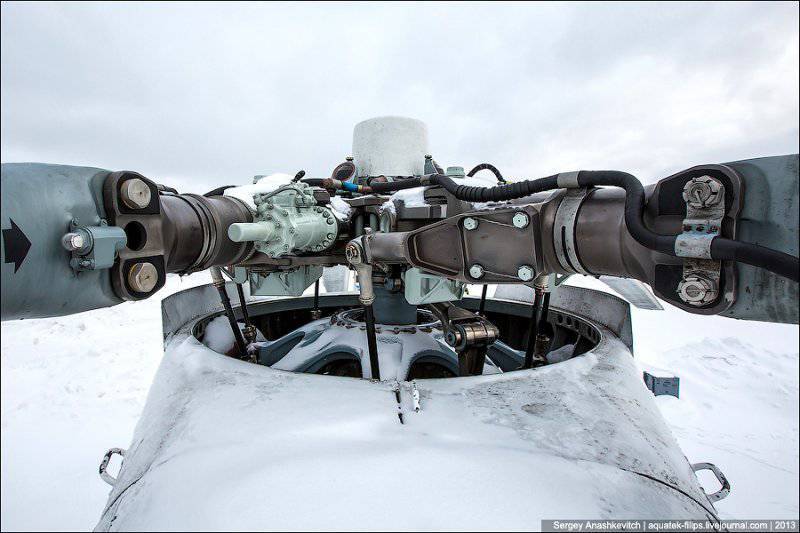 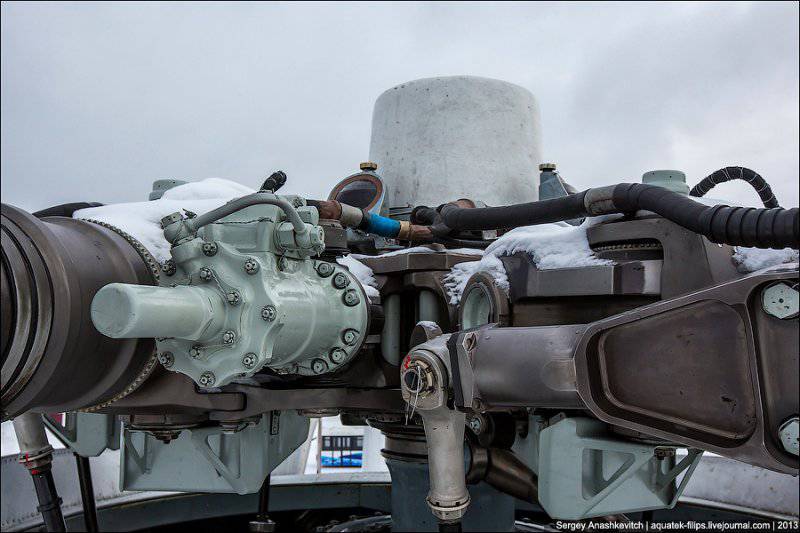 To understand the size of this top "nut", the photo during the maintenance of the engine MI-26 airport technicians 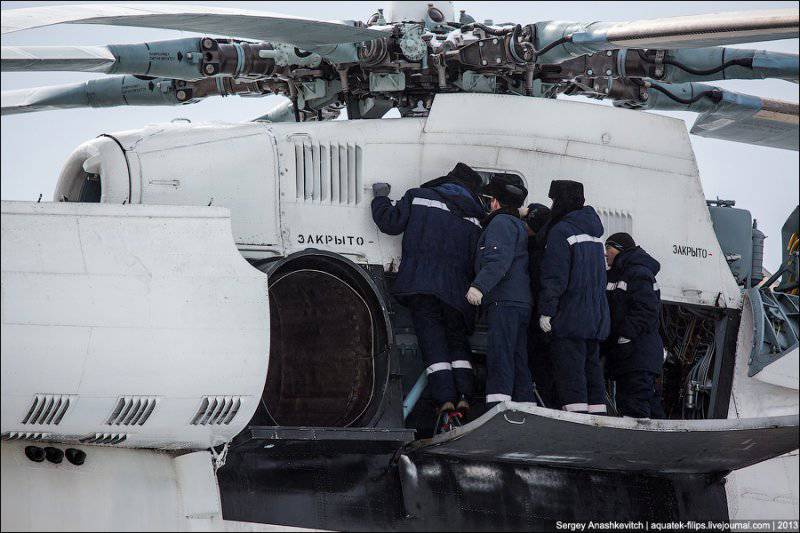 No less striking and the main propeller blades. Their 8, each of which has a length of 16 meters. 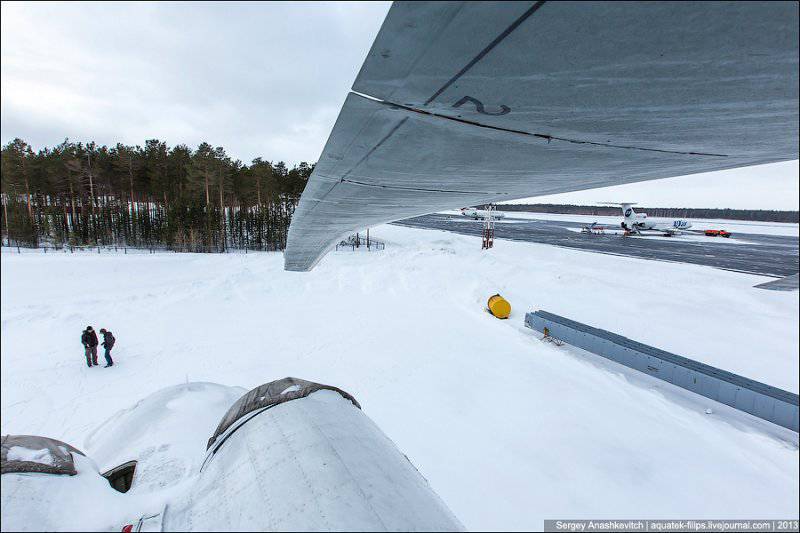 The blades are like metal fingers of some fantastic robot. People below look like ants on their background. 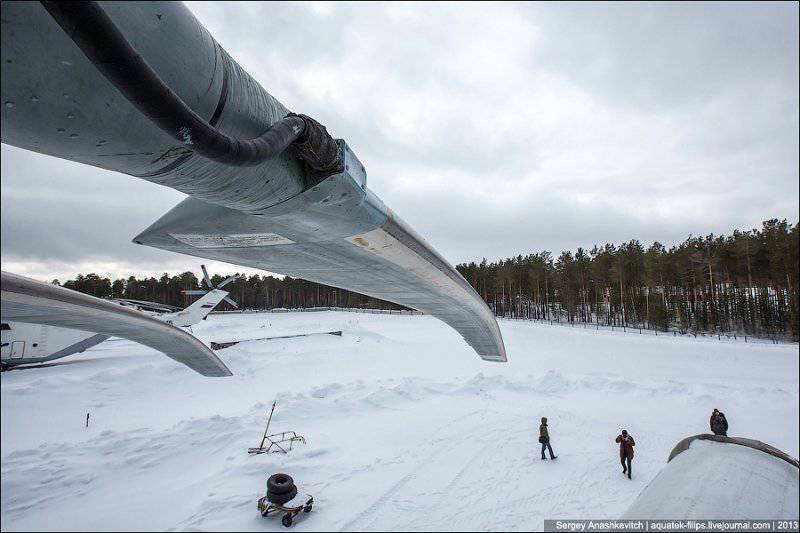 Curved down in a static position, during flight under the action of various physical forces, the blades straighten up, and sometimes it even seems that they are bent to the top. 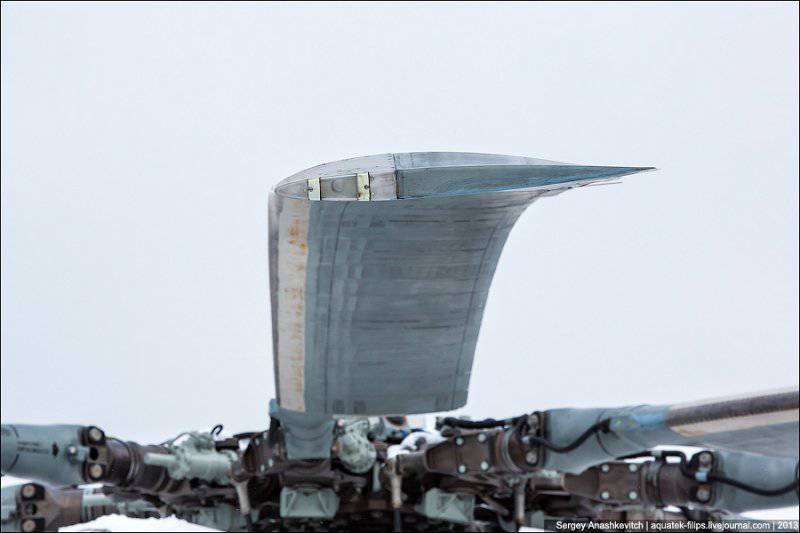 Compared with the main screw, the steering seems very small.
However, its diameter is larger than 7,5 meters. Those. almost like three floors of a residential building .. 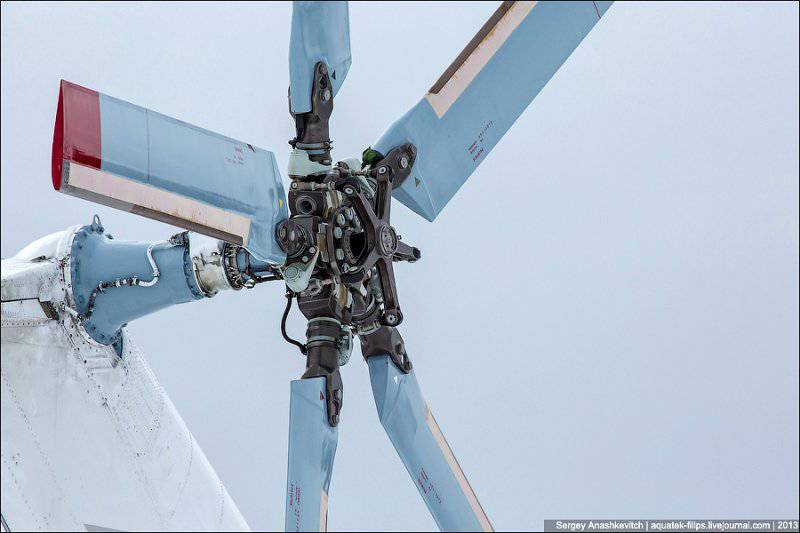 Finally, some funny angles with MI-26.
A heavyweight smile in front .. 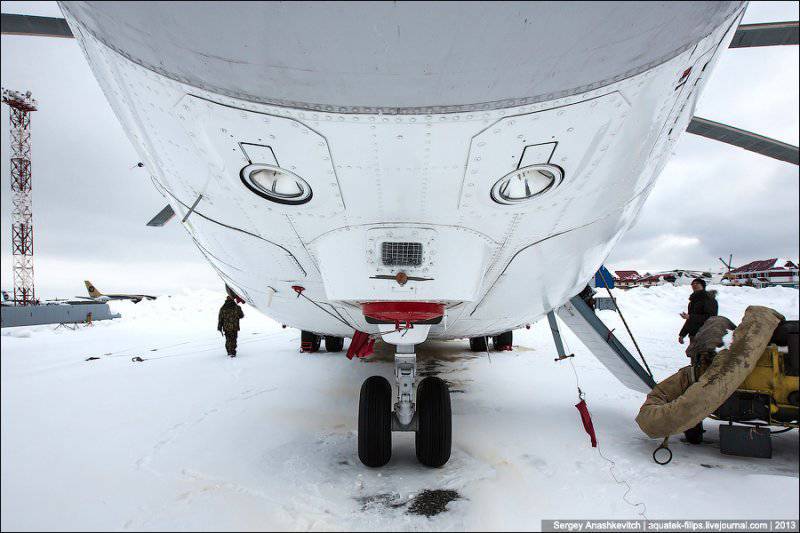 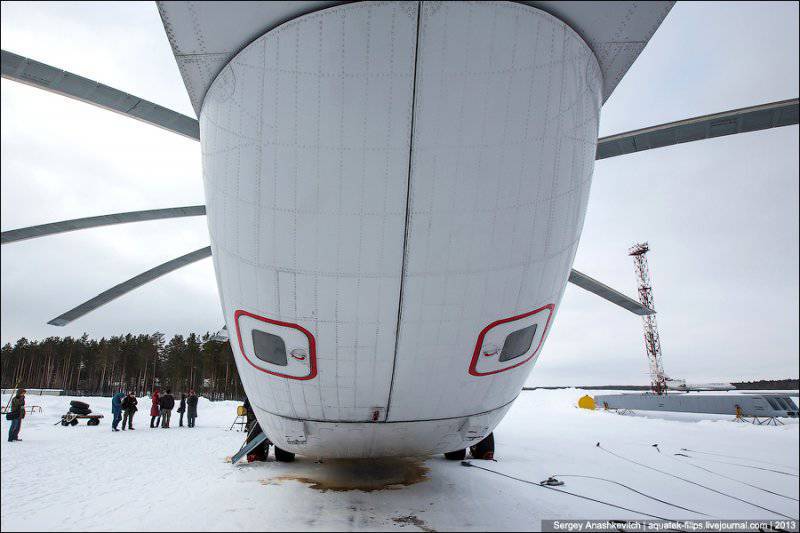 As I said at the very beginning, more than 310 MI-26 helicopters of various modifications were produced. Due to the unique carrying capacity, these heavy trucks are in great demand both in Russia and abroad so far. The largest civilian operator of the MI-26 is the Russian company UTair, which includes the 25 helicopters of this brand. 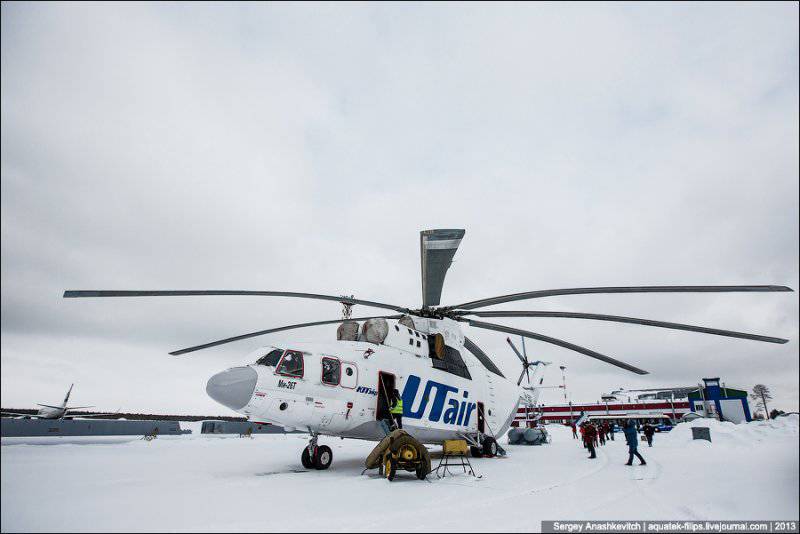 I want to express my deep gratitude to UTair Airlines for the opportunity to prepare a detailed report on one of their helicopters, as well as personally to the company's press secretary, Elena Galanova.