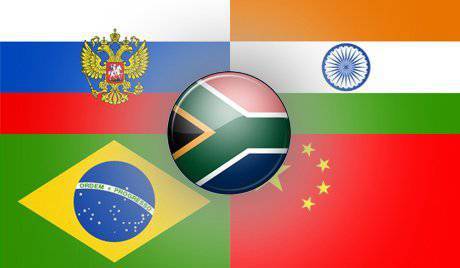 But who do they take for themselves, these self-confident economies - Brazil, Russia, India, China and South Africa?

So you can summarize the feelings in the United States, Europe and Japan at a time when the BRICS countries are considering the creation of a new development bank that can challenge the World Bank and the International Monetary Fund. This is all reminiscent of Alice Amsden, an economist at the Massachusetts Institute of Technology, who died last year, and her book 2001 of the Year - “Lifting the Rest”.

The richest countries may worry about such a turn of events when those on the periphery of the world economic system begin to see themselves as its core. Or, developed countries can look in the mirror and think about how their actions have helped speed up these changes.

Take, for example, Japan’s success in weakening the yen by 17% over the past six months to stimulate its exports. This triggered talk in China and other countries about the return of currency wars. Concerns about exchange rate volatility, undermining trade and economic growth, are largely the reason why the BRICS countries, the vanguard of the rest, want to use their total foreign exchange reserves in 4,4 trillion dollars to protect their economies and increase their international influence.

The sharp decline in the yen coincided with the distortions of the IMF, which is dodging, and how to save the euro. Should I pay attention to the fact that the eurozone may be too messy and incompatible to save it. Forget that Cyprus should not have been included in this enterprise at all, or that the unemployment rate in 50% among young people in Spain makes this fourth eurozone economy a potential time bomb. The IMF, ruled by former French Finance Minister Christine Lagarde, is determined to make the non-viable in Europe viable.

This created a greater perception problem than the IMF and World Bank are aware of. If you are such a world leader as Dilma Russef from Brazil, Vladimir Putin from Russia, Manmohan Singh from India, Xi Jinping from China or Jacob Zuma from South Africa, would you like to support such a Eurocentric system? Is our system, originating from Bretton Woods and formed in the middle of the last century, in the interests of five still developing countries with 43% of the world population? Will the IMF have anything, if, say, a crisis occurs in India?

It did not go unnoticed by the fact that Europe in Asia is treated quite differently after 1997. At that time, the IMF intimidated Asia before adopting tough reforms that aggravated its crisis. The fund demanded an increase in interest rates, a strengthening of currencies and a tightening of fiscal policy, at the same time forcing Thailand, Indonesia and South Korea to allow weak banks to go bankrupt. When Malaysia imposed capital controls, it was fiercely criticized. Europe received a discount ticket for all of the above.

The same thing happened when Wall Street crashed a decade later. The US Treasury Department remained a passive spectator, while control and supervisory authorities, banks, and leading corporations shied away from almost every prescription it issued to managers in Asia, Latin America, and Eastern Europe. This includes clan capitalism when leading bankers move to high-ranking positions in the federal government to return to Wall Street after a few years. As a way to solve the problem, Richard Fisher, president of the Federal Reserve Bank in Dallas, has long recommended that the too-big-to-bankrupt banks should be split.

Why doesn't the IMF demand the same from the Obama administration? Why does the IMF always support the rescue of the economy of Greece, which has learned nothing from its mistakes? How did it come about that Cyprus, with its economy the size of the economy of the state of Vermont, attracts undivided attention of Lagard in a world full of financial and political risks? Shouldn't the “group of seven” countries blame Japan for its policy on the yen or Europe’s denial of the scale of its problems? You can now see why the BRICS countries want their own IMF — an organization that supports economies without hypocrisy.

It is true that Brazil, Russia, India, China and South Africa are still far from a viable economic bloc that its members advertise. When investors talk about the BRICS countries, they often mean China's money and its insatiable appetite for other commodities. Their political systems and economic philosophy differ as much as their immediate needs as countries.

This did not prevent the members of the bloc from taking the abbreviation invented by Jim ONil, an economist at the Goldman Sachs group, so seriously that they are already holding their fifth summit. It also did not prevent them from adding the fifth member. It is strange that they are South Africa, and not, say, Indonesia or South Korea, which have much larger economies.

And yet, while these emerging economies are starting to act independently, the rich countries bear some responsibility for this. Officials in the United States, Europe, and Japan talk a lot about changing the balance in the global economy; on the increasing influence of developing countries in decision making; that markets should be allowed to determine exchange rates; on reducing barriers to trade and capital; and more transparency. But at least since 2007, they most often played by different rules.

Trust must be earned, even if your economy is among those that have driven the growth of the global economy for most of the past century. If the G7 members want today's upstarts to join them in the spirit of future prosperity, they must radiate sincerity. The BRICS countries must believe that global economic mechanisms work for them. If not, then those who are part of the "rest" will create their own space.

Ctrl Enter
Noticed a mistake Highlight text and press. Ctrl + Enter
We are
BRICS countries: responding to the challenge of global governanceBRICS: friendship against the dollar
29 comments
Information
Dear reader, to leave comments on the publication, you must to register.