April 12 2013
6
In 1938, the Swedish company Landsverk developed a light anti-tank SPG L62 Anti based on a Hungarian order. tank L60B. A year later, the self-propelled gun arrived in Hungary, where it was planned to deploy its mass production. L62 military tests took place in August - September 1939. The chassis of the self-propelled gun was similar to the chassis of a light tank L60B, but longer by one track roller. Armament - 40-mm automatic anti-aircraft gun Bofors with a barrel length of 60 calibers, which was installed in an open top welded turret of large size, rotating 360 °. 8 hp Bussing-NAG L36V / 155TR engine dispersed a self-propelled gun weighing 10 tons to a maximum speed of 50 km / h. The commission that conducted the tests proposed increasing the turret’s volume in order to accommodate another crew member, installing a telescopic sight for firing at tanks, and also making a number of other minor changes. On March 10, 1940, the Institute of Military Equipment recommended for serial production of self-propelled guns, which received the designation 40M "Nimrod" - named after the legendary ancestor of the Magyars and Huns. 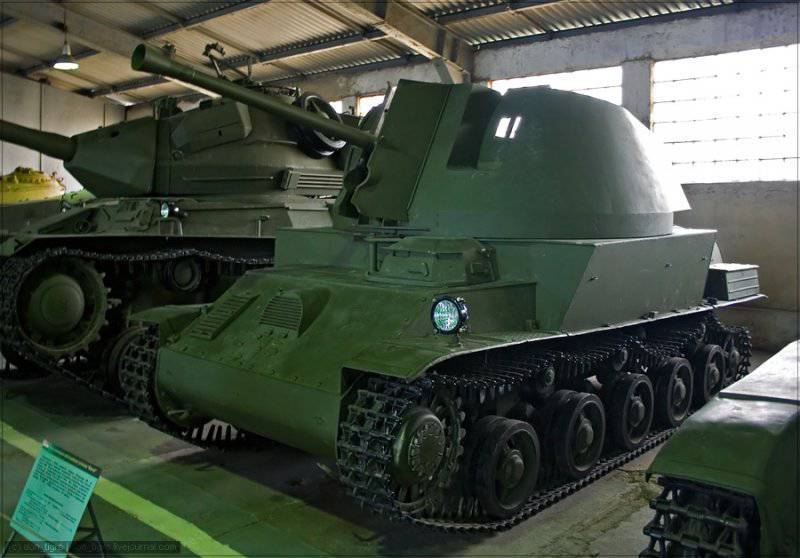 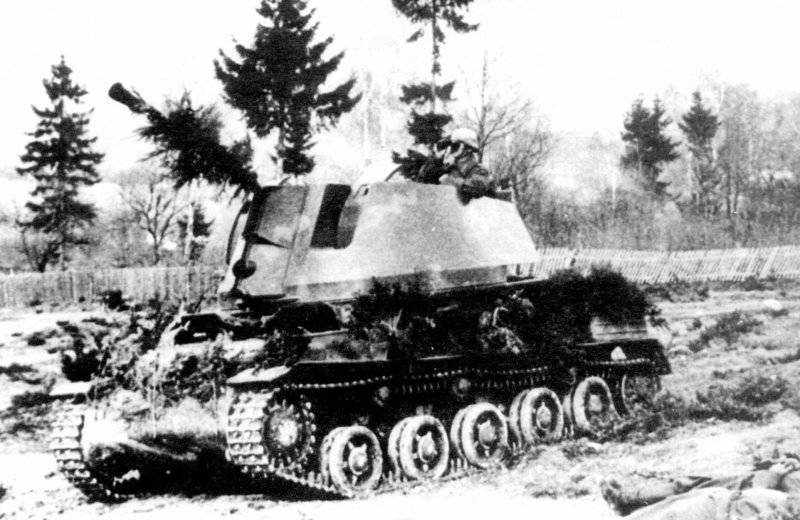 Self-propelled installation "Nimrod" on the firing position of Nimrod

In the Hungarian version of the ACS, it was based on the elongated chassis of the light tank “Toldi”, on which a rotating turret with arms was mounted on top. The tower housed five crew members: the commander, the installer of the sight, two gunner and loader. 40-mm automatic gun Bofors, manufactured at the factory MAVAG licensed under the brand 36M, was mounted on a pedestal in the central part of the body. The elevation angle of the gun barrel was + 85 °, the declination - 4 °. The ammunition, fully located in the tower, consisted of 160 artillery shots with armor-piercing, high-explosive, and lighting projectiles. The shots were combined into clips, four rounds each. 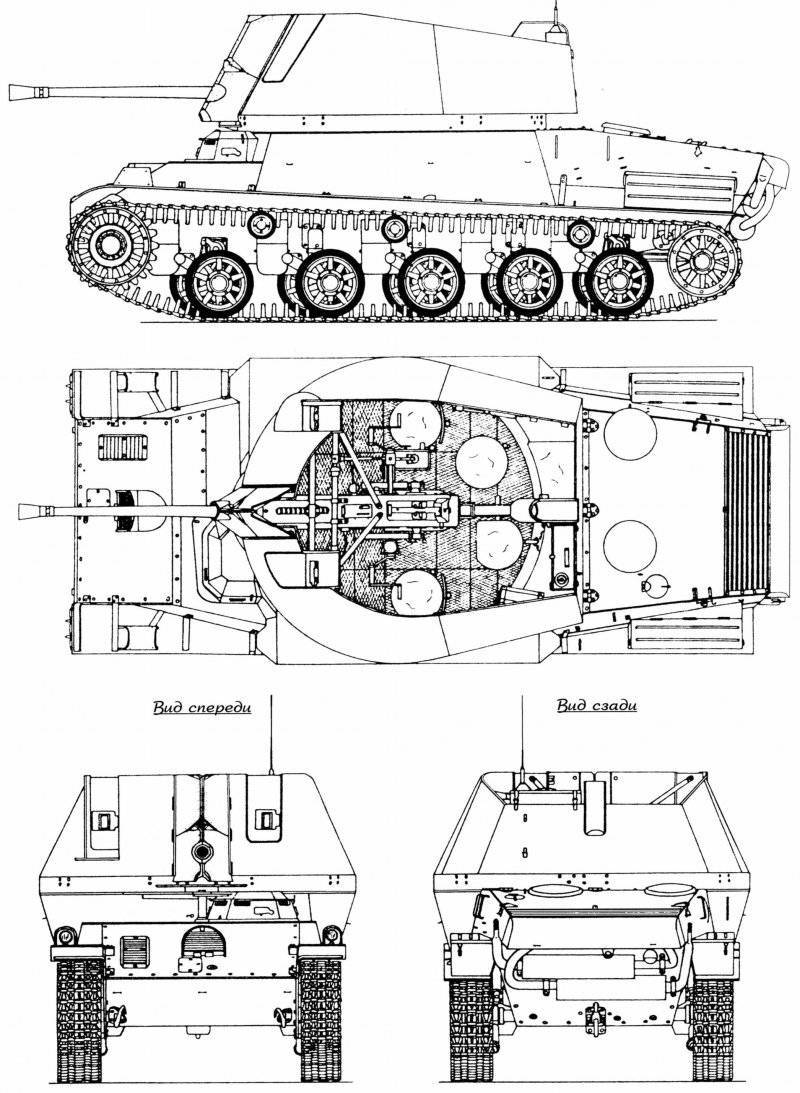 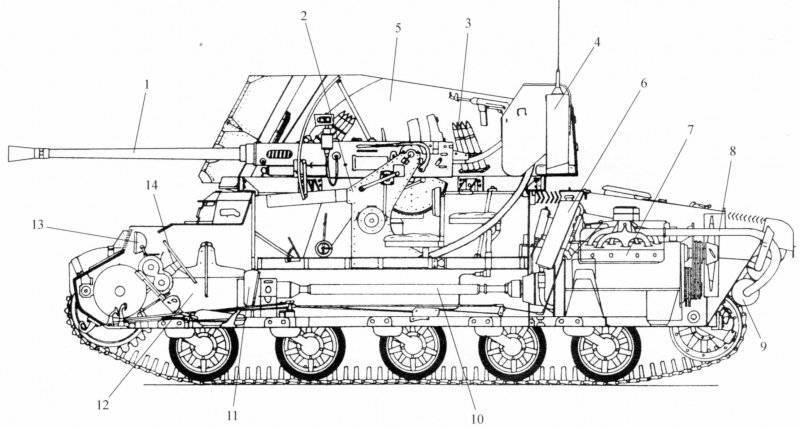 For the rest, with the exception of a longer chassis, the Nimrod was no different from the Toldy tank. The thickness of the armor plates ranged from 6 to 13 mm. The chassis, as applied to one side, consisted of six road wheels, and the steering wheel was raised from the ground. On the machines of the first series were installed German engines Bussing-NAG, and on the second - licensed Ganz VIII Hungarian production. The combat weight of the Nimrod was 10,5 T. Maximum speed - 50 km / h, power reserve - 250 km. Radio R / 5a equipped with only cars commanders of the batteries, although the place for their placement was available on all self-propelled guns.

The Nimroda troops began arriving in February 1942. Since these SAUs were considered anti-tank, they formed the basis of the 51 battalion of tank destroyers of the 1 tank division, which was part of the Hungarian 2, which arrived on the Eastern Front in the summer of 1942. From 19 "Nimrodov" (3 company on 6 SAU plus machine commander of the battalion) after the defeat of the Hungarian army in January 1943, only three cars survived. 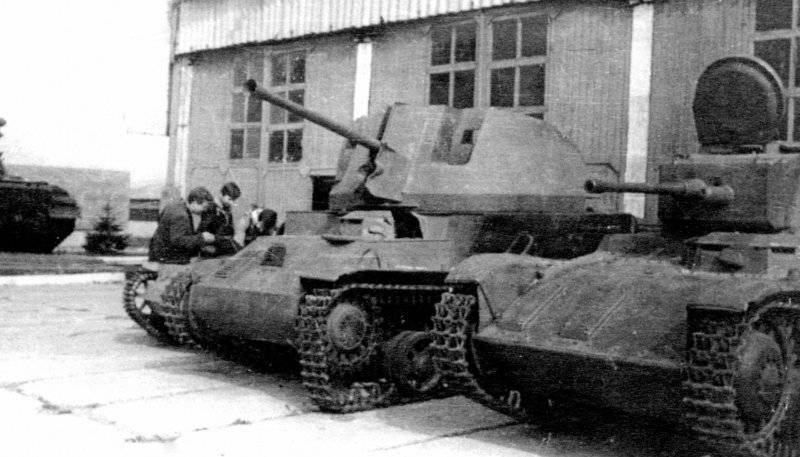 Light tank "Toldy ON" and SAU "Nimrod" in front of one of the pavilions of the Military History Museum of armored weapons and equipment in Kubinka. 1986 year 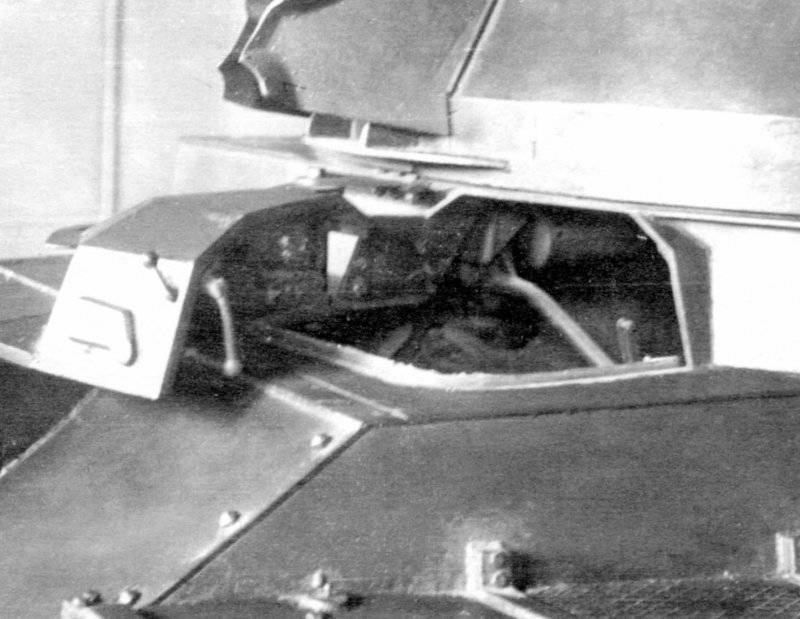 Unlike the Toldi tank, on the Nimrod vehicle, the driver’s cap was removed entirely 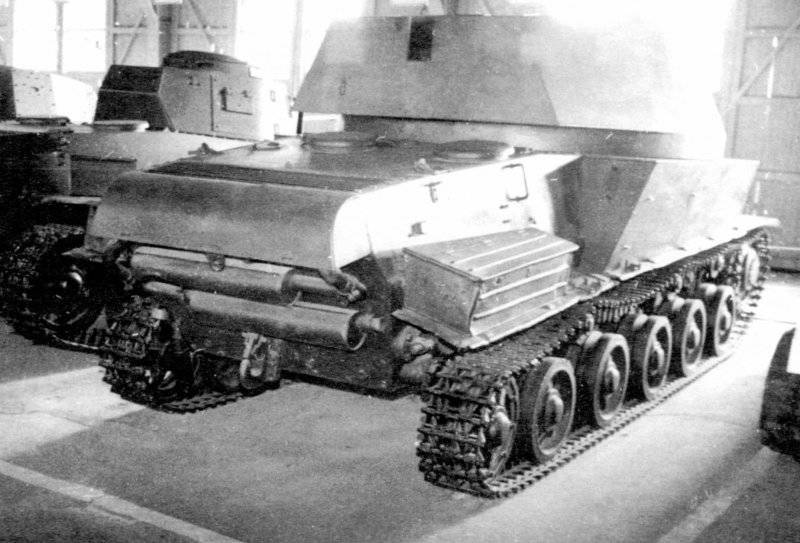 The self-propelled gun "Nimrod" in the Military History Museum of Armored Weapons and Equipment in Kubinka. Both mufflers are clearly visible on the hull rear stern.

They didn’t have much success as an anti-tank Nimroda - they couldn’t fight the Soviet T-34 and KB. Therefore, they were used as a means of air defense of the ground forces, and very effectively. When firing two self-propelled guns were located at a distance of 60 m from each other, between them - a control post with a rangefinder and a computing device.

The 2 Tank Division during the battles with the Red Army in Galicia in April 1944 had 37 ZSU of this type, of which 17 vehicles were in the 52 battalion of tank destroyers. In addition, five companies of four cars each made up an air defense division. In September, when the battles were already on the territory of Hungary, the 1 and 2 tank and 1 cavalry divisions included the 82 "Nimrod" - according to 39 in both the tank and four cavalry. On 7 December 1944, the 2-I tank division was still in service 26 ZSU of this type. In a German counterstrike at Lake Balaton 18 - 19 in March 1945, 10 "Nimrodov" took part. By 22 March they were all lost. Several such self-propelled guns fought in surrounded Budapest.

On the basis of "Nimrod" in 1943, a prototype of the Lehel armored personnel carrier, intended for the transport of 10 infantry, was created. According to other sources, an prototype of the L62 Anti self-propelled unit was remade into an armored personnel carrier. In the same year, on the basis of Nimrod, two sappers were made of non-armored steel. In addition, it was also planned to convert the 10 ACS into transporters for transporting the wounded.

Currently, two copies of the Nimrod ZSU have been preserved: one in the military museum in Budapest, the other (No. Н094) in the Military History Museum of armored weapons and equipment in Kubinka. 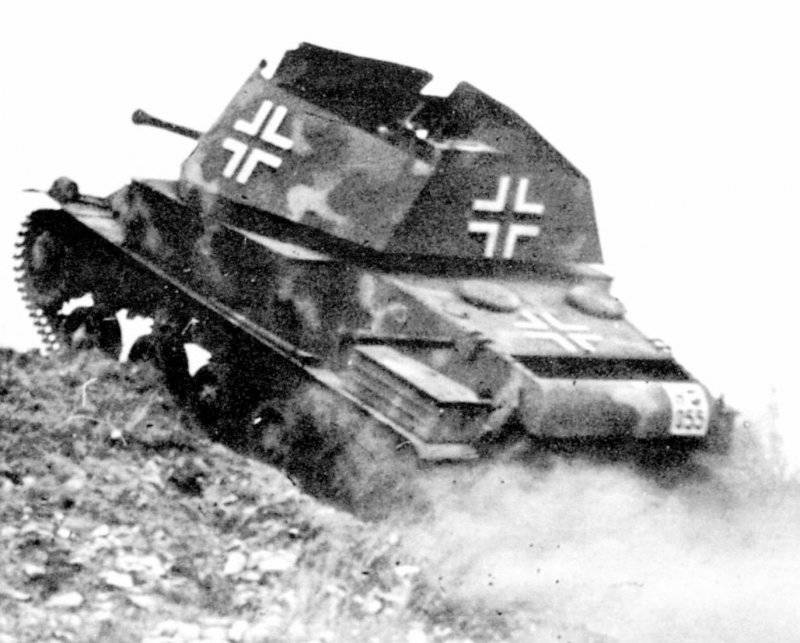 The first serial "Nimrod" during testing in 1941 year. On the sides of the tower and the roof of the MTO are inscribed marks used in the Hungarian army of that period 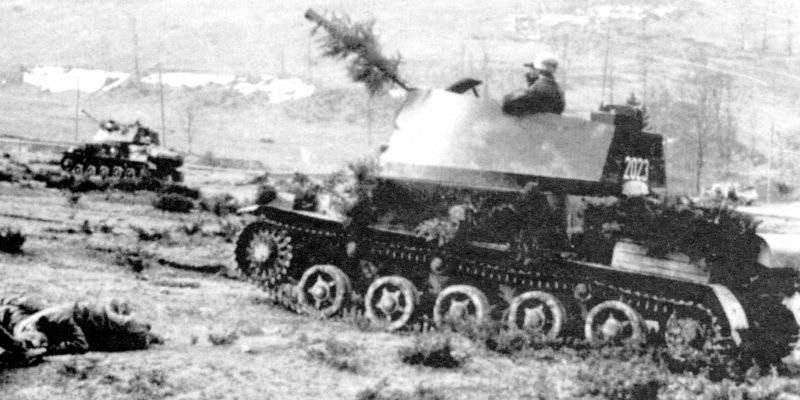 Battery "Nimrodov" in firing position. 1 Cavalry Division, Galicia, summer 1944 of the year. After 1942, the Hungarian combat vehicles received four-digit tactical numbers, which were usually applied to the rear wall of the tower. 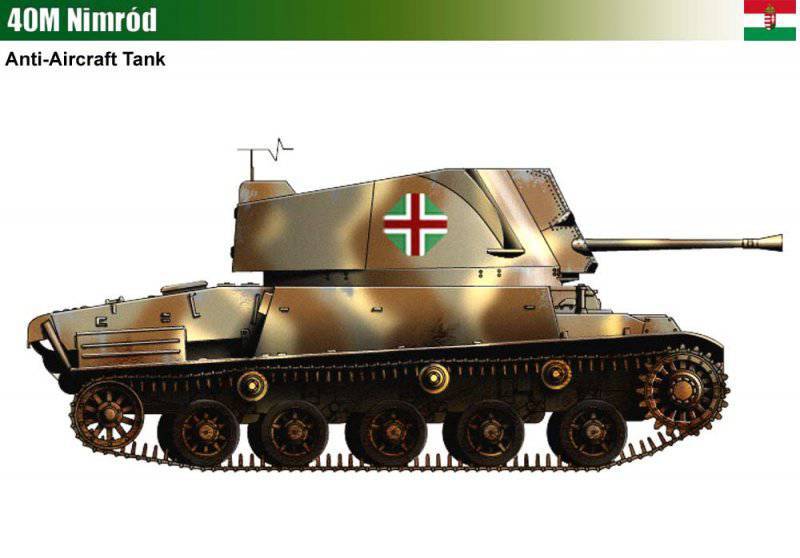 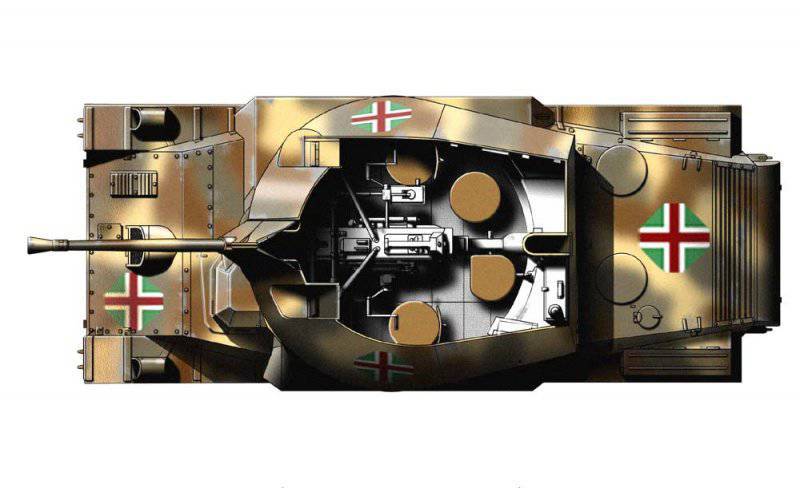