Militants launched a mine war 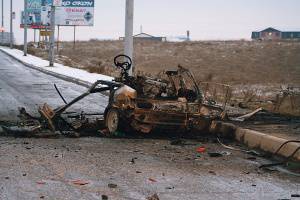 Illegal armed formations are hampering the clearing of the territories of the North Caucasus from explosive objects.


Spring offensive in the south of the country is once again accompanied by militant activity. Despite the efforts of the federal forces aimed at countering illegal armed formations (IAF), the tactics of the latter are being improved and are currently associated primarily with the targeted use of mines and other explosive objects.

Yesterday in Dagestan Buynaksk a passenger car in which there was an officer of the Ministry of Defense was blown up. Judging by the circumstances, the attack was carefully prepared. The explosion occurred at the moment when the lieutenant was getting into the car. Most likely, an improvised mine with a radio-controlled remote fuse worked. The officer died.

The motives for his murder are now being investigated by military investigators. Apparently, this is the work of the militants, who started a real hunt for servicemen and representatives of the Ministry of Internal Affairs in Dagestan. April 1 similar attack occurred near the territory of the mobile detachment of the Interior Ministry in the same Buynaksk. There also worked an improvised explosive device. Only by luck, the victims and the victims were avoided. And since the beginning of the year, according to open data, nine people have died from the use of explosive devices in Dagestan, more than ten were injured.

The situation in Ingushetia and Chechnya is no better. Only this week about ten representatives of power structures suffered from mines. On April 2, in the Sunzhensky district of Ingushetia, during a military operation, at least seven servicemen and riot policemen were wounded from a mine explosion, one of whom died. The chief physician of the Galashkinsky district hospital, Lida Mogushkova, says that in the forests of the Sunzhensky district, where the military regularly fight militants, explosions are constantly heard. “We have become accustomed to this. The whole forest has been plowed by these shells. Many of the roofs of the houses are riddled with splinters, ”she said. At the same time, Mogushkova said that in addition to the military, peaceful people are also suffering, who are also being blown up by mines. The last such incident occurred last Sunday, when in a wooded area in the Achkhoi-Martanovsky district near the village of Bamut, two servicemen of a federal forces unit were blown up by a bomb. As a result of the explosion, one of them died, and the second was hospitalized with a severe contusion.

It is noteworthy that the explosions of servicemen and representatives of law enforcement agencies in Ingushetia and Chechnya often occur in those areas where, according to the plans of the federal center, this year it is planned to clear the territories of mines and other explosive objects. According to the Ministry of Defense, the engineering units of the Southern Military District (South Military District) began working on this in 1 April. According to the press service of the Southern Military District, “the work is carried out in the Shelkovsky, Grozny, Urus-Martan, Shali and Kurchaloy districts of Chechnya and also the Sunzhensky and Dzheyrakhsky districts of Ingushetia. About 500 specialists and more than 30 units of special equipment are involved in them. ”

“Clearing explosive items from the territories of the North Caucasus, started by sappers from the Southern Military District, may be ineffective if the militants who operate in this area are not destroyed,” said military expert Lieutenant-General Yuri Netkachev. He often had to organize the clearance of such areas. And in his opinion, the quality of demining depends, firstly, on how well the engineering units in the minefield area are protected from the actions of illegal armed formations. And secondly, how active the militants are in the conflict zone. “If they can once again lay mines in the cleared areas, then all the work of the sappers will go down the drain,” the expert believes.

According to official data of the Southern Military District, in 2013, sappers of engineering troops in the North Caucasus plan to clear more than 600 hectares of land from explosive objects. Demining activities are planned before 2015. The army leadership promises that by this time the forces of the engineering-sapper units of the Southern Military District will have completely cleared explosives of about 2,5 thousand hectares of land.