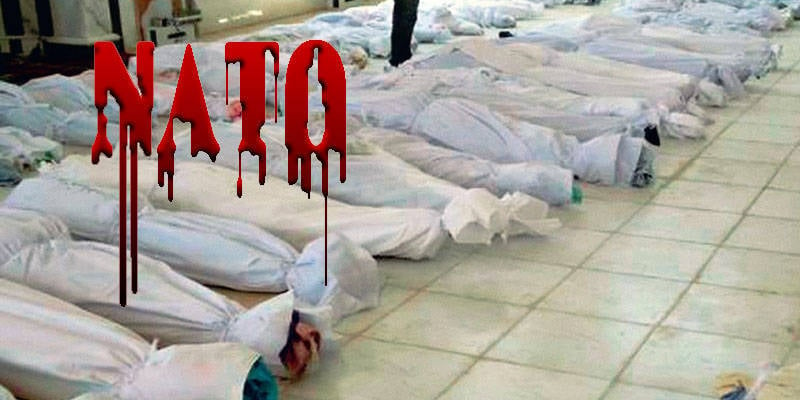 4 April, NATO celebrates its birthday. This aggressive terrorist alliance has turned 64 of the year. Usually, on a birthday, it is customary to remember the merits of the birthday man - so what to remember in this case? The blood of the children of Korea, the suffering of the peaceful Lao and Vietnamese, the tears of Grenada and Panama. This is only until the death of its main enemy - the Warsaw Pact bloc led by the USSR. And then the North Atlantic alliance, which was supposedly created for defense, has already launched an open attack, believing that he and he alone can decide which country is democratic and which is not, only he can punish or pardon. NATO does not always act under its guise, but always in the bloody massacre of entire states, the leading states of the Alliance are participating - the United States and Great Britain, with the support or tacit consent of the rest.

The stormy skies of Yugoslavia, from where hail of bombs falls on houses, bridges and hospitals. The disturbed sands of Iraq, where hundreds of thousands of innocents died. Afghan mountains, where there is no and for a long time will not be a normal life. Bloody dawn over Libya, whose silence is broken by the "Tomahawks" ... And now - more and more inciting the terrorist war in Syria. Five countries sentenced to death in twenty years. How much blood, death and suffering still need to recognize the organization of a criminal world-wide?

It happens that the executioners carry out their sentence not with their own hands, but through intermediary mercenaries, as is observed today in Syria.
NATO countries continue to carry out plans to step up assistance to the so-called Syrian “opposition”, especially the supply of more and more weapons frank terrorists.

The militants, who have been firing mortars at the Syrian capital almost daily every day, have transferred their new tactics to other cities in Syria. On April 4, a mortar shelling of a residential quarter of the city of Homs - Al-Arman was carried out. Several people were injured, material damage was caused to their homes.

The atrocities of the so-called “opposition” and those who support it are also manifested in other moments. Pseudo-religious figures who have a great influence on ordinary militants emit misanthropic fatwas, as a result of which the last remnants of conscience atrophy from terrorists and those who joined them by stupidity.

Salafi sheikh Yasir Al-Ajlauni, a native of Jordan, who once lived for more than 17 years in Damascus, appealed to the so-called "oppositionists" with a fatwa that allowed the rape of women from Alawite and Christian families. All this is under the slogans of “jihad” and “sharia”.

Negligent news related to attitudes towards women comes from the racca provinces seized by militants. Militants who established “Shariah power” in such areas forbade all women to leave home without hijab, and girls from attending schools. A woman who is dressed “non-Muslim” can be sentenced to death. This is the kind of “democracy” that NATO advocates!

In the city of Tel Abyad, in the province of Raqqa, several women were abducted without hijabs. As a result, residents held a massive anti-terrorism demonstration, demanding the return of captives. They were released, but warned that if someone comes out again without a hijab, they will be killed.

In the captured areas there are cleansing on a confessional basis - the terrorists brutally kill Christians and Alawites. Men are forced to pray 5 once a day, and if someone does not want to close their store for the duration of the prayer, they take it away. Close schools. But, as the local residents testify, the “jihadists” themselves are not distinguished by high morality, and in one of the former schools they organized a real public house for those participating in terrorist activities.

Representatives of local tribes are terrified of such “freedom” - and this is in a country that has always been distinguished by toleration and where no one has forced anyone to adhere to this or that faith. They appealed to the government with a request to clear the captured areas of these "liberators" as soon as possible.

The monstrous nature of the militants is manifested not only by the brutal, discriminatory attitude towards women. Suffer and children. From their earliest years in their young heads they begin to lay misanthropic ideas and involve them in criminal groups. Already a lot of noise made a video in which a teenager under the guidance of an adult gangster cuts off the head of a captive officer. But not only Syrian children, but also teenagers and minors from other countries are being drawn into extremist groups. This is said even in the West. The Spanish newspaper El Pais published information that a few days ago the parents of an 16-year-old teen turned to the police station in the Spanish city of Ceuta asking for help to return their son. He left first in Morocco, then to move to Syria, with the intention to take part in the "holy jihad". Employees of the police station said that more than a thousand such cases had already been registered!

When there is misinformation about Syria in the Western media, when an information war is being waged against the government of the country, there is a total demonization - it is not surprising that there are yesterday's children who still believe this propaganda and go "to fight for justice." They do not remember similar cases of the NATO information war against other countries and their leaders. They are too young to remember that, in the same way, at one time, NATO created a false pretext for attacking Yugoslavia, exposing its leadership in the form of a "devil." And then nothing of the Western accusations was confirmed, but the country was destroyed. However, among adults there are people who sincerely believe in Western "democracy", who do not hear the groans dying from NATO bombings or from the actions of terrorists paid for by NATO members.

Western governments are desperately trying to create public opinion that would justify the expansion of arms supplies (including heavy ones) to Syrian militants. Against such decisions is the Foreign Ministry of Russia. Russian Foreign Ministry spokesman Alexander Lukashevich, during a briefing in Moscow, expressed concern that Syria was becoming the center of gravity for international terrorists. He noted that there are more and more reports that third-country nationals are acting on the side of the “opposition” - in particular, sensational cases of a former American soldier who joined the Dzhebhat Al-Nusra group, as well as recently destroyed in Syria two militants with Belgian citizenship.

One of the Russian diplomats, former Russian ambassador to several Arab countries, Oleg Peresypkin noted that the aid of the Syrian "opposition" from Western countries and the monarchist Gulf regimes, especially the supply of weapons to insurgents, pushes terrorists to continue violence and does not contribute to achieving peace in Syria. Therefore, Russia condemns such a policy and calls for a political settlement of the situation in the SAR.
However, as always, NATO countries, adding fuel to the fire, accuse Russia of allegedly slowing down the peace process. From a sick head to a healthy one!

At this time, in other countries there are actions of solidarity with Syria, which today is opposed to the most powerful alliance of NATO and the reactionary Arab regimes.

In Cuba, the Peoples' Friendship Institute organized a rally of solidarity with the SAR, which was attended by members of diplomatic missions and representatives of public organizations in Latin America. They strongly condemned the intervention of the West and NATO in the internal affairs of Syria.
In Yemen, there was a massive demonstration of solidarity with the fighting country, its army and leadership. The participants carried the Syrian banners and portraits of the UAR President Bashar Al-Assad. They chanted anti-NATO slogans.

In the United States, with the participation of the Permanent Representative of Syria to the UN, Bashar Al-Jafari held a prayer service for all those killed in Syria. Many religious leaders advocated peace in the country.

It is sadly celebrating its birthday to the NATO bloc - slogans of contempt for its aggressive policy are heard all over the world. And in the glasses of NATO officials - the blood of innocent nations. Including, and Syrian.

Ctrl Enter
Noticed oshЫbku Highlight text and press. Ctrl + Enter
We are
Army "Isthmus". From Honduras to BelizeSituational analysis of the death of the MH17 flight (Malaysian Boeing 777), made on the basis of engineering analysis from 15.08.2014
Military Reviewin Yandex News
Military Reviewin Google News
98 comments
Information
Dear reader, to leave comments on the publication, you must to register.