April 8 2013
17
The Soviet Su-15 interceptor fighter (according to the NATO Flagon codification) has long been the basis of the Soviet air defense system. The development of this aircraft began at the beginning of the 1960-ies. It so happened that the plane took part in a large number of air incidents involving foreign aircraft that flew into the USSR. The most famous of these was the destruction of the Boeing 747 South Korean passenger aircraft in 1983. In addition, the Su-15 interrupted the flight of Boeing-707 over the Kola Peninsula (again South Korean), and also made one air ram.


This interceptor fighter for its history received several different nicknames. Usually such aviation nicknames often very accurately notice the features and characteristics of military equipment. So it was with this plane. The very first and famous name was “Boeing killer”, the second name came from the first and was sarcastic “dove of peace”, the third nickname - “handsome air defense”. It is worth noting that this aircraft was really a very beautiful car, especially in flight. It was also sometimes called a “pencil,” for the characteristic shape of the fuselage, which was very thin and long.

The Su-15 interceptor fighter was designed to intercept air targets in the speed range from 500 to 3000 km / h and heights from 500 to 23 000 meters. The departure of the aircraft to the meeting area with an air target and until it was detected using on-board radar was carried out using ground-based automated guidance complex called "Air-1". The interception of targets, guidance of missiles with a radar homing head and aiming was carried out by the radar. The infrared homing missiles used a different principle - the infrared (thermal) radiation, which they perceived, came from the target itself. 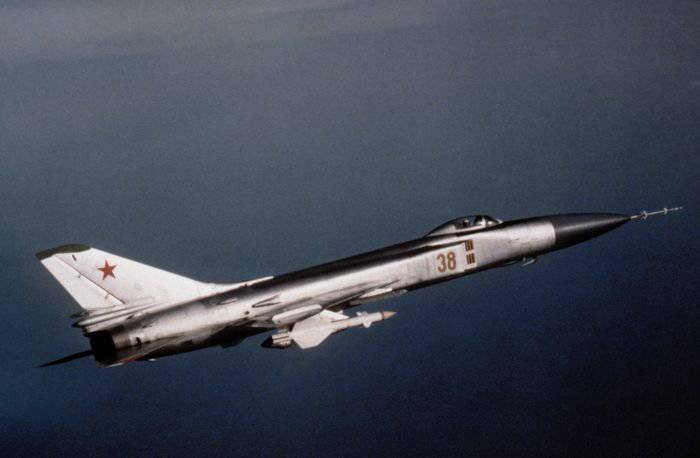 The construction of the aircraft began in the spring of 1960 of the year, as part of the modernization of the Su-11 (T-47) interceptor plane already in service with the AL-7-2 engines. Also, when creating the machine, the reserve was used on the T-3М (T-37) fighter-interceptor program that was minimized earlier. The new aircraft received the designation Su-15 and working code T-58. The modernization of the aircraft assumed the creation of a new machine capable of intercepting targets in a wider range of flight speeds and altitudes, including on a collision course (to the forward hemisphere). In addition, the possibility of automating all the main stages of the interception operation was considered, for this it was necessary to install an automatic control system on the fighter.

The construction of the prototype fighter-interceptor was completed at the beginning of 1962 of the year, its first flight under the designation T-58D1 performed 30 on May 1962 of the year. Piloted the test pilot V.Ilyushin. State tests (ICG) of the new fighter were carried out in a very short time - from August 1963 to June 1964. Unlike the previously tested Su-9 and Su-11 interceptors, these tests passed without significant incidents and observations. According to the GSE results, the short distance was the biggest drawback of the new fighter.

To eliminate this deficiency, the fuel supply was increased on the plane. It was possible to achieve this by straightening the fuselage lines of the fighter in the area of ​​the wing interface and removing the “waist” that was present on the interceptor’s prototypes. 30 On April 1965, the Su-15 interceptor fighter was adopted by the USSR Air Defense Forces as part of the Su-15-98 interception complex. This interception complex included the Su-15 interceptor fighter (T-58), the armament system with the RP-15 radar ("Orel-D-58") and the UR P-98 radar in two versions: with passive thermal seeker and semi-active radar homing, also part of the complex was the ground part - the guidance system "Air-1". 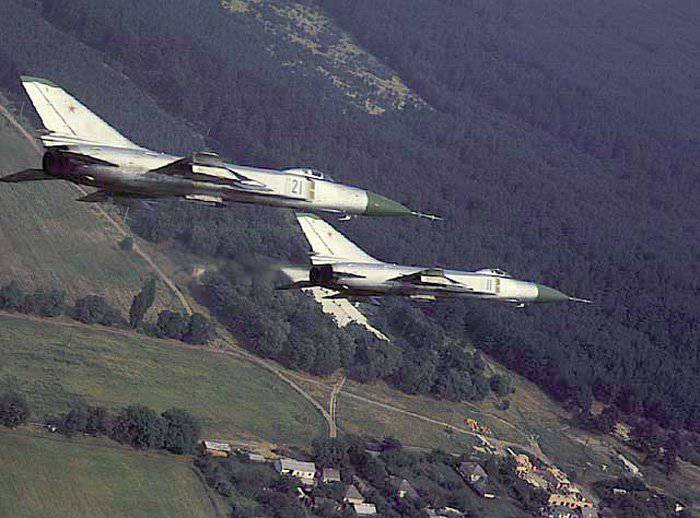 The serial production of the Su-15 fighter-interceptor began in 1966 at a factory in Novosibirsk, where he replaced the Yak-28П aircraft in the workshops. The first pre-production sample, 6 March 1966, was launched into the sky, under the control of the plant test pilot I. F. Sorokin. The following year, the cars began to arrive in the air defense troops. The very first new fighter aircraft was re-armed with the fighter regiment of the Moscow Air Defense District, which was located at the Dorokhovo airfield. Already in the course of serial production of the aircraft, to improve the take-off and landing characteristics of the fighter, an OPS (boundary layer control) system was introduced on it - blowing off the boundary layer on the flap.

Su-15 is a supersonic single interceptor fighter, all-metal mid-plane with a normal aerodynamic configuration. The fuselage of the aircraft is a semi-monocoque design, consisting of 2-x parts - the head and tail. In this case, the tail of the aircraft could be undocked for maintenance and replacement of engines. In the nose compartment under the radiotransparent cone was radar RP-15M. Further located: a compartment with a cabin of the pilot, under which there was a niche of the front landing gear and a cabin compartment of equipment. The pilot's cockpit lantern consisted of a fixed visor with an armored block and a sliding part made of heat-resistant plexiglass. On the sides of the cockpit were air intakes that were adjustable, with a vertical three-stage braking wedge. On the side surface of each of the air intakes located on the sash additional air intake.

The aircraft was equipped with a triangular wing, which had a sweep angle in 60 degrees along the leading edge. To increase the lift force during takeoff and landing, each of the wing consoles had rotary flaps with a boundary layer control system (UPS), the presence of this system contributed to an increase in the efficiency of aircraft flaps. Initially, this system was not connected, but later it was fixed. To improve takeoff and landing performance and reduce inductive resistance, starting with the 11 series of the fighter, the wing design has undergone a number of changes. In particular, the wing area was brought to 36,6 square. meters, and the leading edge of the end portion has acquired a kink in 45 degrees, as well as aerodynamic twist. The tail of the aircraft consisted of a keel with a rudder and a stabilizer. 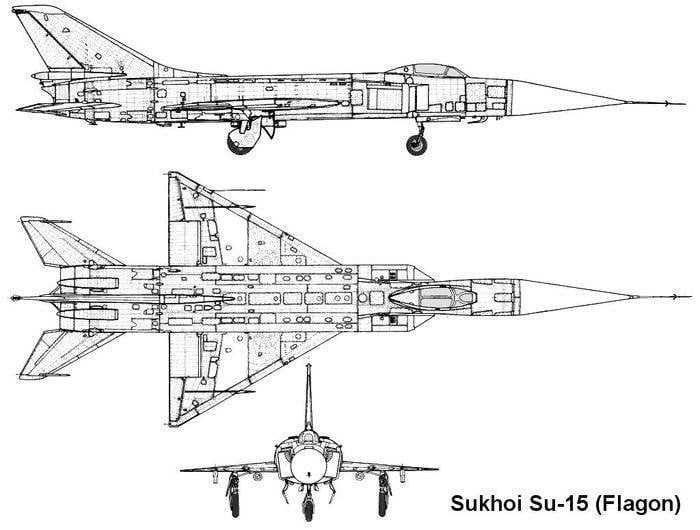 The chassis of the fighter-interceptor was a three-post classic. The front pillar was retracted into the fuselage of the aircraft and equipped with a brake wheel of 660x200 mm size, the main landing gear pillars were retracted in wing niches to the axis of the aircraft and equipped with single wheels of 880x230 mm size The brake drums of the latter had a spirit-water cooling. In addition, the aircraft was provided for the installation of a brake landing parachute, which was located in a container under the rudder.

The fighter was controlled by boosters (boosters), which were included in an irreversible pattern and were mounted near the controls - ailerons, stabilizer, rudder. Four autonomous hydraulic systems provided for the production and cleaning of the chassis, brake flaps, flaps, shutters of jet engine nozzles, control of air intakes, power supply of the on-board radar antenna drive. The working fluid of the system was - AMG-10. The fighter was also equipped with 3 autonomous pneumatic systems. Pneumatic systems were used for emergency and main wheel braking, emergency release of flaps and landing gear, pressurized hydraulic tank and so on.

The Su-15 fuel system included pipelines, fuel tanks and special units. A total of 3 fuselage, 2 wing and 2 outboard fuel tanks were on the plane. PTB were placed under the fuselage of the car on two girder holders. The total capacity of the interceptor fuel system with outboard fuel tanks was 8060 liters. Aviation kerosene of the following brands could be used as fuel: T-1, T-2, TC-1, PT. 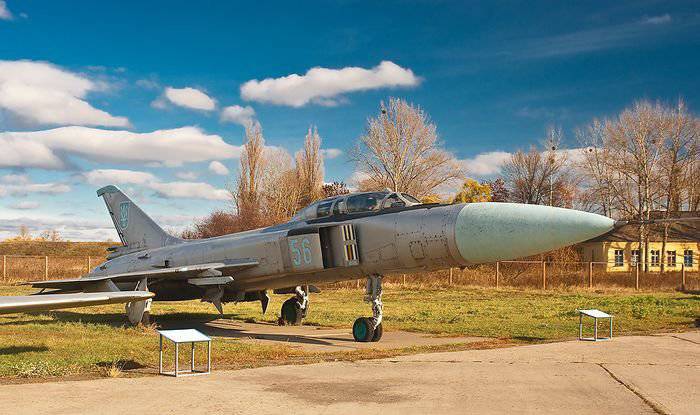 The Su-15 life support system included an oxygen supply system and an air conditioning system. During flights at speeds up to 900 km / h and at altitudes less than 10 km, the standard equipment of the pilot consisted of a ZSh-3 safety helmet, an oxygen mask KM-32, a ventilated overalls VK-3 or VK-4. During flights at supersonic speeds, the pilot wore a special high-altitude compensating suit. This could be VKK-4, VKK-6 (6P), as well as the GSH-4MS, GSH-6М or GSH-4MP helmets. The fighter-interceptor was equipped with an ejection seat of the KS-4, which provided the pilot with the safe escape of the aircraft throughout the entire range of speeds and flight altitudes, including run and mileage at speeds above 140-150 km / h.

A rather rare case for jet aircraft is connected with the Su-15 fighter - an air ram. 18 July 1981, a CL-44 transport aircraft, owned by Transportes Aereo Rioplatense from Argentina, flew Tel Aviv-Tehran, carrying weapon for Iran. Most likely, inadvertently, this aircraft invaded the airspace of the USSR from Armenia. A Su-15TM fighter-interceptor led by Captain Kulyapin was raised to intercept it. Accompanying the CL-44, he, according to the international code, gave signs to the intruder to follow him. However, the Argentine plane did not react and continued to fly towards the border. There was no time left to attack with the help of R-98 missiles, and Kulyapin was ordered to ram the intruder, which he did, having hit the CL-44 stabilizer with the fuselage. After that, the transport plane went into a tailspin and crashed, killing 4 members of its crew. At the same time, the Su-15 pilot safely ejected and survived. For this ram he was presented to the Order of the Battle Red Banner. It was just the 2nd and last case of rams in the history of jet aircraft.

Flight performance of the Su-15TM:

Ctrl Enter
Noticed a mistake Highlight text and press. Ctrl + Enter
We are
Boeing-707An-12 in Afghanistan
17 comments
Information
Dear reader, to leave comments on the publication, you must to register.