In the spring of 1983, US President Ronald Reagan notified the world of plans to place interceptor satellites in near-earth orbit. They were intended for destruction at the initial segment of the flight trajectory of Soviet intercontinental ballistic missiles. The program was called the Strategic Defense Initiative, or, abbreviatedly, the PIO.

The Soviet media unanimously began to brand Washington’s militaristic plans, accusing him of whipping up the next round of the arms race.

Meanwhile, in the USSR for several years active work was carried out on the creation of space weapons, including orbital laser systems.

In the seventies – eighties, several experimental samples of space laser guns were built in the Soviet Union. They were developed to destroy American interceptor satellites in orbit around the Earth. All existing installations were “tied” to a stationary power supply and did not meet the main requirement of military space - full autonomy. Because of this, the designers could not conduct full tests.

To test autonomy for the gun, or, as stated in the documents, a “powerful power plant” (LSG) was decided to be installed on a surface ship. Tasks on testing military laser government assigned to the Navy.

The choice of sailors fell on the auxiliary cargo ship fleet Dixon. The ship had a displacement of 5,5 thousand tons, a length of 150 meters and a speed of 12 knots. These characteristics, as well as the structural features of the vessel, were excellent for installing new equipment and conducting tests. In addition, the ship was left behind its former name and the harmless classification of the cargo ship. So that the West does not worry.

At the beginning of 1978, Dikson arrived at the shipyard in Leningrad. The refurbishment works were carried out under the direction of the Nevskoye design office. In parallel, the assembly of a laser gun began at the Kaluga Turbine Plant. It was supposed to be the most powerful military laser system in the USSR. All works were classified and received the title "Theme" Aydar ".

About stories unique laser ship correspondent "Versions" told the direct participants of this project. Specialists involved in the work on the system have called “Dixon” a “golden fish”. The project cost a fortune - the bill went to hundreds of millions of Soviet rubles.

But the work constantly stumbled over the serious problems of the technical and scientific plan. For example, to install 400 cylinders for compressed air on a ship, shipbuilders had to completely remove the metal lining from both sides.

Later it became clear that the hydrogen accompanying the shooting could inadvertently explode on the ship. He has a habit of accumulating in closed spaces, so they decided to mount enhanced ventilation. The upper deck of the ship was designed so that it could open in two parts. As a result, the hull lost strength and had to be strengthened.

The lasers calculated that the ship’s propulsion system could not give the gun the required energy in 50 megawatts. They proposed to strengthen the ship diesel engines with three jet engines from the Tu-154 aircraft. In the ship I had to make holes again and change the layout of the hold.

No less colossal funds devoured work on the gun itself. For example, the development of an adaptive reflector (such a “copper basin” with a diameter of 30 centimeters, which was supposed to direct a laser beam at a target) cost approximately 2 million Soviet rubles. The whole production association in the Moscow suburban town of Podolsk spent half a year on its production. The required perfect surface was achieved by special grinding. The reflector was handled by the enterprise workers day by day. Then the reflector was equipped with a computer specially designed for it. The computer monitors the state of the surface of the reflector with an accuracy of micron. If the computer detected distortions, it instantly gave a command, and the “cams” ​​attached to the bottom of the 48 reflector began to thresh on the “basin” and straighten its surface. Again with micron accuracy. And so that the reflector does not overheat after contact with the beam, a special lining was attached to it. It was made from priceless beryllium. The thinnest capillaries were drilled in the lining, along which, to the delight of the sailors, a forty-degree solution of alcohol was pumped over. For one experienced shot took 400 liters. However, as the project participants say, after the lecture on the topic “The Effect of Beryllium on the Human Body”, the amount of alcohol consumed at Dixon decreased.

At the end of 1979, Dixon moved to the Black Sea, to Feodosia. In Crimea, at the Ordzhonikidze ship repair plant, the final assembly of the gun and control systems was carried out. In the same place on the ship settled permanent crew - sailors and six KGB officers.

Under the neck of "special importance"

Contrary to the old maritime tradition, a new home base - Sevastopol met “Dixon” without an orchestra and feast. The “dry cargo ship” was set apart from warships on the 12 berth of the North Bay. A few days earlier, approaches to the pier were surrounded by a concrete fence four meters high. We pulled the wire. Let the current. Established the strictest bandwidth mode.

With seafarers and civilian specialists took a "non-disclosure" subscription. Just in case: if anyone is interested, then the subscription expired in 1992 year.

His first laser salvo "Dickson" produced in the summer of 1980 of the year. They shot from a distance of 4 kilometer on a special target position, located on the coast. The target was struck from the first time, although no one saw the beam itself and the destruction of the target from the shore. A thermal sensor mounted on the target recorded a hit along with a temperature jump. As it turned out, the efficiency of the beam was only 5 percent. All the beam energy was “eaten” by evaporation of moisture from the sea surface. However, the shooting results were considered excellent. After all, the system was developed for space, where, as you know, a complete vacuum.

But the tests of the laser gun cooled the ambitions of the commander-in-chief of the Navy, Admiral of the Soviet Navy Gorshkov, who dreamed of installing “hyperboloids” on almost every ship. In addition to low combat performance, the system was cumbersome and difficult to operate. It took more than a day to prepare the cannon for a shot, the shot itself lasted 0,9 seconds. To combat the atmosphere that absorbs laser radiation, scientists have invented to launch a combat beam inside the so-called ray of enlightenment. As a result, we managed to slightly increase the combat power of the laser, which could already burn through the skin of the aircraft, but at a distance of only 400 meters.

The laser tests were completed by 1985 year.

Despite the fact that the tests were successfully completed, the designers and the military looked at their offspring skeptically. Everyone understood that it would not be possible to put such a system into orbit in the next 20 – 30 years. This was also known to the highest party leadership of the country. The management was not satisfied with the terms and the impending prospect of gigantic expenses. Designers offered more economical design. For example, the launch into orbit of the so-called unmanned satellites - kamikaze. In the event of war, they, according to the plan of scientists, were to approach the American interceptors and explode. The most likely idea was to create special orbital systems spraying coal dust in orbit. Clouds of such dust were supposed to block the enemy’s combat lasers. But all this, despite the seeming simplicity, again required tremendous material costs.

The same problems faced overseas. The outcome of the space arms race that did not take place was the negotiations “On Defense and Space”, which started in March 1985. They were the impetus for the bilateral coagulation of military space programs.

There is an opinion that in fact no one was going to put combat satellites into orbit. In developing space weapons, Moscow and Washington simply bluffed to undermine each other’s economies. For greater likelihood, did not skimp on large expenses.

After negotiations as proof of good intentions, the Soviet Union demonstratively stopped working simultaneously on several space programs. In 1985, the Aydar theme was curtailed. About "Dixon" forgotten.

The editors do not have official data on the future of this unique ship. But according to recent reports, during the division of the Black Sea Fleet, the laser ship "Dikson" went to Ukraine.

From the Editors of the site “Courage”: according to the typology of the Typhoon, the experimental ship Dikson of the 59610 project, which successfully tested the naval laser weapon, was suspiciously quickly written off by Ukraine. The total confusion of the 1990-ies, which came with the collapse of the USSR, has caused many machinations, including at the highest level. When a ship was written off, a “silent” scandal occurred: the top-secret test documentation disappeared without a trace (!!!), although one can easily guess who got the fruits of many years of work. Moreover, the ship itself was in excellent technical condition, had five serviceable diesel generators, but was sold to India to a private company for the price of scrap metal! Without a sanction from above, such cases are practically excluded, and our country has suffered damage, possibly billions of dollars. 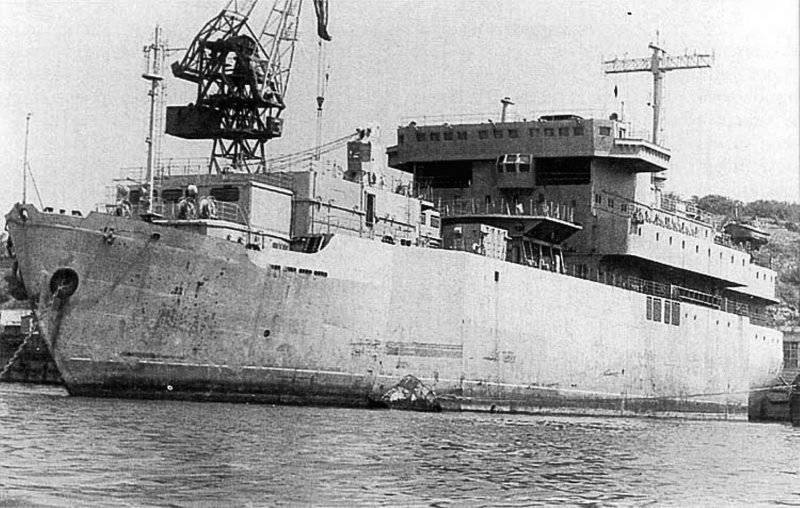 Experimental ship "Dickson" on the Black Sea. In front of the navigating bridge one can clearly see a large platform on which the MSU laser installation stood.