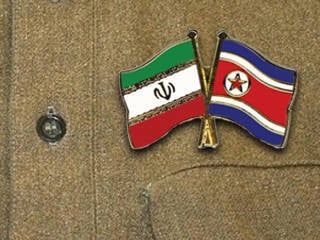 Iran and North Korea are the constant and most prominent heroes of modern international relations. History rogue relations of the Western world is long and rich. The “axis of evil” has outlived its most active opponents and is still alive.


However, the topic of the strategic partnership of these two countries is relatively poorly covered, in their opposition to the modern international order. But the history of this cooperation has almost 30 years!

What is so common in Pyongyang and Tehran?

The first thing that unites them is their main direct military, political and ideological opponent - the United States.

The second is that both countries, in their ideology, are committed to “maximum independence and self-sufficiency”. Moreover, these two societies are relatively closed ideocratic formations. Therefore, their hostility to current global trends is, in general, logical.

Thirdly, the dominant official ideological attitudes in their self-identification are determined by the "colonial syndrome".

The fourth is the independence of foreign and domestic policy. Even during the Cold War, both countries already showed a high degree of independence in foreign policy. The DPRK was a friendly state to the USSR, but it was impossible to call it a truly loyal and controlled ally.

Back in those years, the Juche idea was positioned as an alternative to both Western imperialism and the Soviet model. The situation is similar with Iran. Suffice it to recall that Khomeini compared the United States with the "big devil," and the USSR with the "little devil." Well, Marxism-Leninism in the works of Khomeini is generally called "godless heresy."

Thus, the joint struggle for individual military-political independence for both regimes was more profitable than actions alone. And it began in the 1980-e years.

Immediately after the Islamic revolution 1979, Iran was in foreign policy isolation. The war with Iraq, which began in 1980, forced Tehran to urgently look for suppliers of weapons, ammunition and medicines. Here Pyongyang was the perfect partner.

Secondly, the DPRK’s military exports were not controlled by either the United States or the USSR — this allowed Pyongyang to be used as a fairly reliable and predictable supplier.

Thirdly, North Korea experienced a chronic shortage of foreign exchange and energy, and Iran could offer both.

Fourthly, North Korean products were not too expensive.

Since 1983, Iran has begun to receive a variety of weapons and military equipment from North Korea. Before the end of the war with Iraq, Tehran received from the DPRK: Tanks T-62, self-propelled artillery mounts with a caliber of 170 mm, heavy salvo systems with a caliber of 240 mm, local copies of Soviet field guns and howitzers with a caliber of 122 mm and 130 mm and so on.

However, Iran’s needs were not limited to purely military goods. So, Tehran also widely distributed medicines. However, the procurement of ballistic missiles in the DPRK became a real breakthrough in bilateral cooperation. Iran became the first foreign buyer of this type of local military products. Cooperation in the field of rocket technology turned out to be the most successful area of ​​partnership [1].

Iraq its short-range ballistic missiles Р-17 (in the world media they are often called the common word SCUD) acquired in the Soviet Union. North Korea, on the other hand, purchased two similar missile systems in Egypt and then copied Soviet missiles.

Tehran paid the price mainly for oil supplies. Moreover, the scale of these supplies were impressive.

The role of Iran as an energy supplier for North Korea at the turn of the 80-90-s is widely underestimated. It is usually claimed that the collapse of the USSR and the subsequent cessation of the supply of oil and oil products became the only reason for the energy and food disaster in the country. However, at the end of 1980-x– the beginning of 1990-s, the role of the USSR was not so irreplaceable.

The cessation of the Iraqi-Iranian war and, accordingly, the reduction of the scale of military imports by Iran hit the DPRK's fuel balance much more than Perestroika and the collapse of the USSR. Just look at the numbers.

And then came the 1991 year. This year the USSR ceased to exist. But deliveries from Iran have also stopped. The war with Iraq ended in 1988, and three years later the oil payment of the main large quantities of weapons delivered earlier (in the war years) was completed. Iran has delivered total 220 thousand tons of oil this year. That is, because of the collapse of the USSR, Pyongyang missed 410 thousand tons of oil (relative to last year), but the drop in Iranian supplies amounted to as much as 760 thousand tons.

So the reduction of Iran’s military imports turned out to be a factor for the emergence of the North Korean 1990 disaster not less significant than the collapse of the socialist camp.

The war in the Persian Gulf, which had died down in 1991, again raised the value of Pyongyang for the "enemies of America", to which Tehran belonged.

Iraqi ballistic missiles turned out to be the only weapon that at least somehow reached the American troops and objects in the region. Iran quickly took note of this experience. And the only country that could really seriously help Iran increase its capabilities in this area was North Korea. Therefore, the Iranians began to attract far greater resources both to their missile program and to cooperation with the DPRK in this area.

Cooperation went in several directions, over the years changing accents.

2. The import of components and the establishment of production of missiles from them are already in Iran. Figuratively, "screwdriver assembly." In this case, North Korean specialists were also involved in the construction of production facilities in Iran. Here, too, first there were short-range missiles, then medium-range.

3. Establishment of production of rocket parts and assemblies in the territory of Iran itself.

4. Joint development and production of new missile systems. Helping each other in the search for new rocket technologies in foreign markets. In 1990, the role of the main design bureau unconditionally belonged to Pyongyang. Tehran also took on the financial side of the issue.

Separately, both countries would not have been able to create such serious arsenals of missile weapons by the middle of the 2000s. Moreover, they are sufficient to be a real threat to the American forces and their allies in their regions.

The DPRK did not have access to the world market for civilian technologies and materials, and also experienced tremendous difficulties with access to foreign currency. Iran did not have adequate technological potential. However, together they had both. Over the 1990-e and 2000-ies, both countries acquired fully efficient medium-range ballistic missiles and in fact brought their rocket industries to a new level.

It was these successes that predetermined American nervousness about the capabilities of national and regional missile defense. It's enough to look at the dynamics. For example, in 1991, not a single prospective US military opponent (outside the UN Security Council) had medium-range ballistic missiles. In 2013, two direct adversaries possess such missiles - this is Iran and the DPRK.

In 1991, not a single regional adversary of the United States from the Third World had its own missiles capable of putting a payload into orbit. In 2013, both Iran and the DPRK are members of the "space club".

However, ballistic missiles themselves are not a strong argument. They are the trump card if they are equipped with nuclear warheads. Of these two opponents of the United States, both are the epicenter of international non-proliferation crises. Moreover, the DPRK has already conducted three nuclear tests, and Iran has mastered the technology of uranium enrichment.

It is obvious that Pyongyang and Tehran are actively cooperating in the nuclear sphere, although there is very little confirmed concreteness here. But out of the view of the media, another important aspect often disappears. In recent years, deep cooperation in the field of military technologies has again expanded to the field of conventional weapons.

Both countries have similar problems with their military capabilities.

First, the inability to effectively cover its territory from a full-scale American air offensive.

Secondly, there are serious limitations on the ability to solve many of their problems by importing certain systems. Both countries are under a variety of sanctions.

Thirdly, the need to create a variety of asymmetric solutions to the problem of the enormous superiority of the enemy in technology.

Therefore, in recent years with the naked eye it is noticeable that the Iranians in every way attract North Korean technology and ideas to their service. Primarily in the field of war at sea. This ultra-small submarines, similar to the North Korean. And unobtrusive high-speed strike boats, which are also copied from their North Korean counterparts. Analysis of their available images in general has become similar to the game "find at least a few differences."

Also in two countries, apparently, there is cooperation in the field of creating a new generation of air defense systems. Practically at the same time, work on new anti-aircraft missile systems began there and there! Testing of such systems in both countries is regularly reported. Judging by the fact that C-300 is called a source of inspiration for systems both there and there, cooperation in general is predetermined [2].

Iranian strategic sites are also becoming increasingly similar to North Korean. Primarily due to the increasing deepening of the earth. Considering that at one time, North Korean engineers helped with the fortification of Hezbollah, whose ears stick out of it, obviously.

What conclusions can be drawn from all this?

First, the United States is opposed not by two separate countries, but by a completely real military-political alliance. The key feature is the presence of full-scale and long-term military-technical cooperation in various fields. And not only foreign policy declarations.

Secondly, a US war against one of these countries will be a perfectly suitable training ground for practicing war against another. The structure of offensive and defensive potential here and there every year becomes more and more the same. And therefore the only experience of dealing with one will be relevant in another case.

Thirdly, the death of one of these regimes will significantly reduce the chances of the other to preserve in the foreseeable future. That is why the American military operation against Iran or the internal revolution in the future significantly strengthens the American capabilities in Northeast Asia.

Fourth, the successes of Iran and the DPRK in the field of rocket technology will continue. This, combined with the American concept of “One Gate War”, makes the creation of a global missile defense system inevitable. The creation in the DPRK or Iran of intermediate-range or long-range combat missiles means only one thing - the early acquisition of similar missiles by another country.

Given the physics of the trajectories of intercontinental missiles, in the case of firing Iran at the United States and the EU, some of the missiles can fly over the territories of Eastern Europe and Russia. More precisely, such options are completely physically permissible and technically feasible, but the reverse is impossible to guarantee.

Of course, the American work on missile defense is explained not only by the activities of the DPRK and Iran. The long-term goal is obvious - in the long term to create a system capable of limiting the Russian and Chinese nuclear missile capabilities. However, Iran and the DPRK are unlikely to agree to exchange their prestige and security for comfort for the foreign policy of Russia and China. So, the disassembly of Moscow and Beijing with Washington will not go anywhere.

Fifth, considering all of the above, we can even say that the partnership of the DPRK and Iran in their opposition to the United States has already become an important factor on a global scale.

Ctrl Enter
Noticed oshЫbku Highlight text and press. Ctrl + Enter
We are
What you didn't want to know about EnglandIranian geography
13 comments
Information
Dear reader, to leave comments on the publication, you must to register.