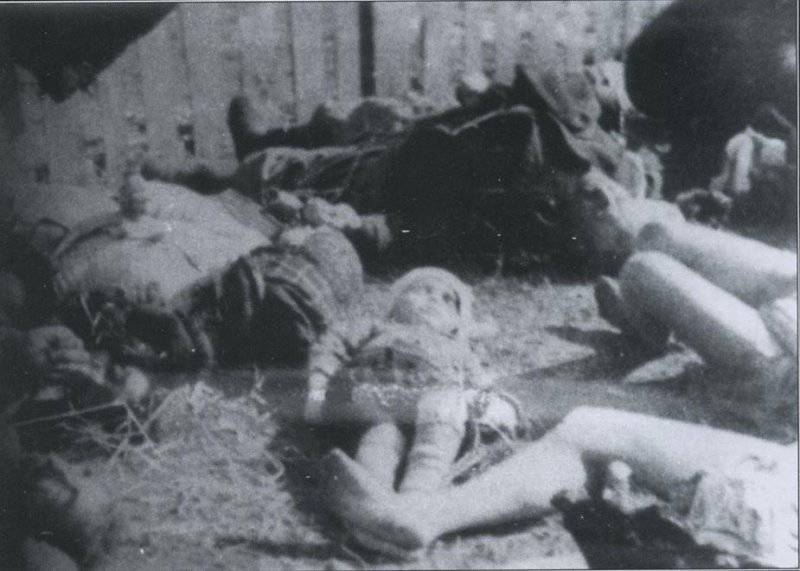 The extermination of the Polish population of the “Cres-voskhodnykh”, known as the Volyn Massacre of 1943-1944, is not a passing topic of Polish consciousness. The brutal murder of Bandera almost hundreds of thousands (according to some sources - up to 150 000) Polish women, children and the elderly can not be forgotten. Official Kiev, fearing to scare away the Western Ukrainian electorate, is extremely reluctant to deal with this topic. The Ukrainian authorities can still lay wreaths on the graves of the murdered Poles in the name of a speedy "European integration", but they are not ready to completely abandon the Neanderís motives in their ideology ...


Ukrainian nationalists want to get to Europe at least through Poland, but as soon as Poland remembers the victims of the Volyn massacre, Ukrainian national patriots fall upon it with aggressive attacks.

“Ukrainian question” for Poland is always relevant. On the one hand, Warsaw is interested in Ukraine as a “buffer” separating Poland from Russia. Theoretically, the more Russophobia in Ukraine, the better for Poland. On the other hand, Ukrainian Russophobia is often intertwined with Ukrainian polonophobia in a tight knot, and both phobias form the moral character of Ukrainian nationalism.

During the existence of sovereign Ukraine, initiatives on Polish-Ukrainian reconciliation have been launched more than once: joint conferences were held, assurances of friendship sounded and ... there was a search for a third to which one could turn the blame for the bloody events in Volyn. Looking for a short time: it was decided to announce the culprit of the Soviet special services, which, they say, and inflamed the Polish-Ukrainian contradictions. This version was especially popular in 1990: when the USSR collapsed, they dreamed of a “European future” in Kiev, and Warsaw supported the anti-Soviet and anti-Russian tendencies in Ukraine with all its might.

In the framework of cooperation between the World Union of Soldiers of the Home Army and the Union of Ukrainians in Poland, seminars were held, where the creation by the Soviet secret services in the ranks of the UPA agent network was discussed. A lot was said that allegedly Soviet soldiers under the guise of UPA fighters attacked Polish villages, and the Soviet command formed several mixed Polish-Ukrainian partisan units hostile to the OUN-UPA. They say that these units organized repressions against the Ukrainian population, provoking Polish-Ukrainian bitterness (1).

The historian and specialist in Polish-Ukrainian relations Grzegorz Gritsuk (Wroclaw University) rejects such insinuations, as Grzegorz Motyka, a member of the board of the Polish Institute of People's Memory. Mr. Motyka states that the hypothesis of “Soviet provocation”, actively promoted by some Ukrainian authors, does not have the slightest documentary evidence (2). According to G. Motyki, the massacre of the Poles in Volyn is not a spontaneous demonstration of the Ukrainian nationalists, but a cold-bloodedly planned Bandera action (3).

One of the most famous Polish-Ukrainian historians, Viktor Polishchuk, who devoted his whole life to the study of the nature of Ukrainian nationalism, wrote that after the defeat of the West Ukrainian People’s Republic in the war with Poland, the officers of the Ukrainian Galician Army in the mass emigrated to the West, primarily in Germany, where the "brown" mood at that time covered the general population. The angry and disappointed Galicians experienced the same psychological complexes as the Germans after the Versailles Peace. Their “union of hearts” was predetermined (as was shown by the events of the Great Patriotic War, when Ukrainian nationalists served the Third Reich). Victor Polishchuk characterized calls for Polish-Ukrainian friendship through oblivion of the victims of the Volyn massacre as “Polish-Bandera unity” (4).

There is a rich evidence base testifying to the criminal role of the ideology of Ukrainian nationalism in inciting ethnic hatred not only to the Poles. During the Volyn tragedy, the UPA punishers massacred Jews, Armenians, Czechs, Russians, and their own Ukrainians. “Without overcoming Ukrainian nationalism,” says Victor Polishchuk, “the threat of degeneration will hang over the people of Ukraine.”

Ukrainian independence has always given and will give an ultra-radical Nazi tinge. Isn't it amazing: for 20 and more than the years of the existence of independent Ukraine, not a single Ukrainian president condemned the practice of exalting OUN-UPA veterans ?!

If you try to schematically describe the nature of the Ukrainian state ideology, depicting it as a straight line with two poles on the left (with a minus sign) and on the right (with a plus sign), it will look like this. On the left (the pole with a minus sign) are placed the most radical interpreters of the national Ukrainians with their wild views. Such as Stepan Lenkavsky, the ideologue of the OUN (“Do not be afraid to admit that you are fascists. After all, we are like this!”), With his “Decalogue of the Ukrainian nationalist”, where you can find the following words: “Go unshakably to the most dangerous crime if will require the interests of the cause. You will fight for the strengthening of the power, fame, wealth and expanses of the Ukrainian State, even by enslaving foreigners. ” Such as Dmitry Dontsov, the guru of Ukrainian nationalism ("Be the aggressors and invaders before you can become rulers and owners ... Universal truth does not exist"). Here is the Ukrainian collaboration of the Great Patriotic War (Bandera, Shukhevych, SS division "Galicia").

Closer to the middle are supporters of the national-Ukrainians of a more moderate sense. This is also the terrorist Nikolai Mikhnovsky, who in 1904, blew up a monument to Alexander Pushkin in Kharkov. It is the racist Yuri Lipa with his words: “Physical love for one’s own and physical hatred for someone else in worldview and spirituality is what is characteristic of Ukrainian women, from antiquity and until recently.”

Further, the closer to the pole “plus”, the more nationally Ukrainians become more diplomatically slick, turning into the picture that we see on television - the symbols of Ukrainian statehood, the institution of the presidency, the correct speeches of Ukrainian diplomats and politicians in international forums. However, as an integral phenomenon cannot be divided into components without taking into account the interrelationship of these components, so the official, “diplomatic” Ukrainians cannot be considered in isolation from its ideological basis - the Ukrainian nationalist ideology with its pro-Nazi sympathies.

Adherence to this ideology does not benefit Ukraine, for example, from Belarus. At one time, Poland owned both Western Ukrainian and Western Belarusian lands. In both Ukraine and Belarus, the Polish order was the same, but the results of Polish domination in Ukraine and Belarus are completely different. Belarus did not know such a phenomenon as the OUN-UPA, and even more so the ethnic cleansing of the Polish population, although Belarus is the most “Polish” republic within the USSR and the CIS. By the way, the same argument is given by those Polish historians who resolutely refute the version of the Volyn massacre as a Soviet provocation (if the Soviets wanted to get rid of the Poles and provoked the Polish-Ukrainian confrontation, then why, one wonders, did not provoke the Polish-Belarusian opposition, especially that in Belarus there are hundreds of thousands more Poles than in Ukraine?).

The whole point is that the ideological distance between the “Ukrainian idea” and (neo) Nazi views is extremely small. A strictly “Ukrainian” style of thinking, wherever the bearer of this style lives - in Western Ukraine, in Canada or elsewhere, requires at least a partial justification for collaborationism and the glorification of the OUN-UPA warriors.

The pro-Nazi sympathies of a part of the Ukrainian elite, the glorification of veterans of the Nazi troops (including those of the Volyn Massacre veterans) are for some reason not yet considered an obstacle to European integration. However, for some reason I think that the Polish public has not yet said its last word about this.

Ctrl Enter
Noticed oshЫbku Highlight text and press. Ctrl + Enter
We are
How the US turns Russia into a white "Rwanda".Volyn's tragedy: why "it is difficult to believe the Poles ..."
Military Reviewin Yandex News
Military Reviewin Google News
84 comments
Information
Dear reader, to leave comments on the publication, you must to register.