April 5 2013
16
The Ministry of Defense of Japan officially announced the completion of the creation of a new generation of P-1 patrol aircraft for the country's national self-defense forces. The first batch of 2 combat vehicles entered service aviation Atsugi base March 26, 2013. The new Kawasaki P-1 anti-submarine aircraft replaced the long-running P-3C. The creation of a new generation of patrol aircraft involved the famous Japanese aircraft manufacturer Kawasaki Heavy Industries. Work on the development of a new aircraft was launched in 2001.


The completion of the development of the P-1 was planned for March last year, but the deadlines for the project were shifted by almost a year due to a marriage that was discovered during the production of the fuselage and wings. The cost of one anti-submarine aircraft Р-1 by experts is estimated at approximately 20 billion yen (208,3 million dollars). In total, the Ministry of Defense of Japan intends to acquire 70 of such aircraft, which will have to replace 80 with outdated P-3C. At the same time, the total number of patrol planes of Japan’s self-defense forces would even decrease, but, according to military assurances, this is fully offset by the significant advantage of the new aircraft in reconnaissance capabilities and flight speeds over the old P-3C patrols. 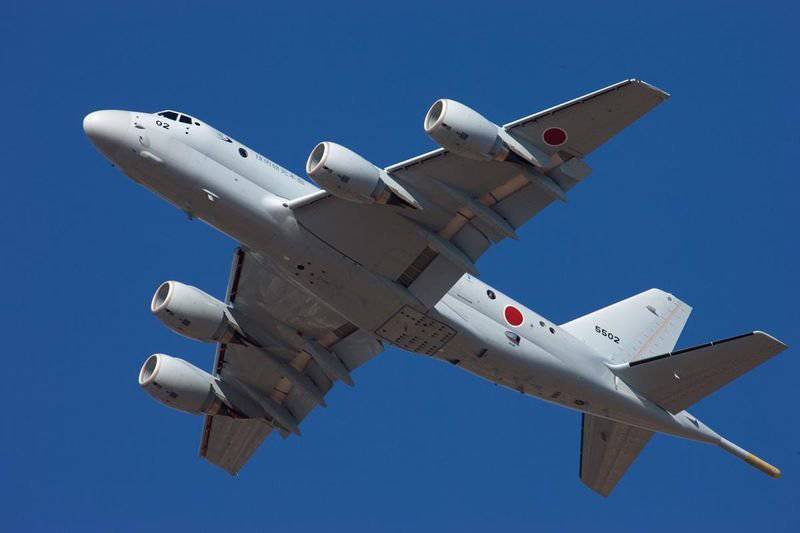 The introduction of a new generation of Japan’s self-defense forces against the background of aggravating relations between the PRC and Japan on the basis of the territorial dispute over Senkaku / Diaoyu Islands. Currently, patrol ships of China regularly enter this zone, which Japan considers its territory. The use by the Japanese side of the new P-1 aircraft is intended, inter alia, to gain greater control over the territorial waters around the disputed island.

At present, the P-1 patrol aircraft is the only one of its kind specially designed jet aircraft of this designation, excluding deck models. Of the patrol aircraft operated today, independent development can only be attributed to the Breguet Atlantic, which was created from scratch; all other patrol aircraft are a modification of previously created aircraft for other purposes (usually transport or passenger). However, Japan does not independently produce large airliners, although it is actively involved in their production. For this reason, a new patrol aircraft began to build from scratch. The development of the aircraft came from the 2001 of the year, the first serial Kawasaki P-1 rose into the sky 25 September 2012 of the year.

Currently, the Japanese aviation industry seeks to gain independence. Today, 2 is implemented in Japan by completely different national aviation programs - the creation of the anti-submarine patrol and anti-submarine P-1 and the C-2 military transport aircraft, both of which are developed by Kawasaki. At the same time, the Japanese used a very original approach; to save money, both aircraft were designed in parallel with the use of common components, parts and components in the design. In addition, the savings are at the stage of creation, production and testing. It is worth noting that, apparently, it’s not very possible to save, at least, the anti-submarine aircraft has already come out quite expensive. 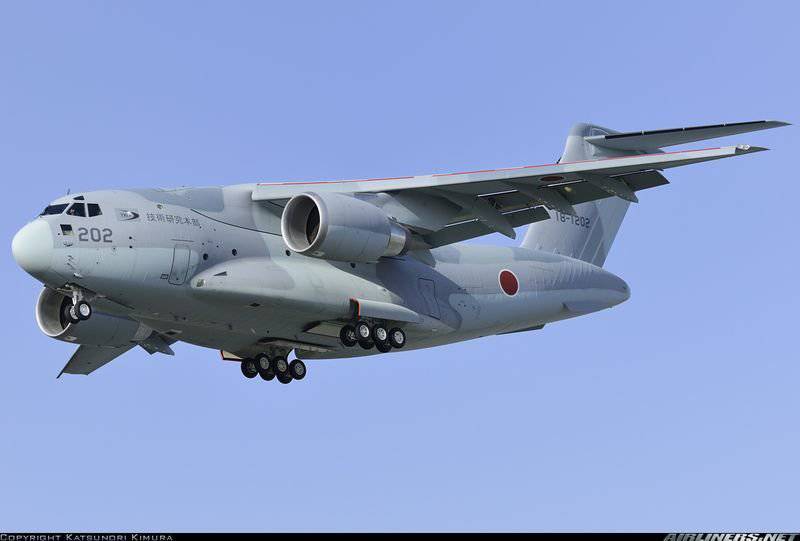 Military transport aircraft C-2
It should be noted that the idea of ​​unification of aircraft of such dissimilar characteristics didn’t come to mind. Judge for yourself, the take-off weight of the patrol aircraft does not exceed 80 tons, and the transporter - 141 tons (the difference in 76%). The first aircraft is a classic nizkoplan, and the second is a high-profile. On the first aircraft 4 engine, on the second - 2. And this is not to mention their different purposes. The two aircraft have completely different fuselages, landing gear and many systems. At one time, starting this project, Kawasaki worked under the slogan: “One project is the 2 product.” Beautiful idea, but not very beautiful implementation. Today, the airplanes share wing detachable parts, horizontal tail console, cockpit glazing, APU, flight control computer, monitoring and warning systems, cockpit dashboard, etc. The total savings on this development can eventually reach up to 10%.

In the decision of the Japanese Defense Department to create these "twins" there was an obvious political aspect. The Japanese military firmly rejected the US proposal to supply the country with a new generation of P-8 Poseidon maritime patrol aircraft, which was based on the Boeing 737, as well as the military transport Boeing C-17 and Lockheed Martin C-130J. The formal reason for the refusal is the inconsistency of these aircraft with the requirements of the Self-Defense Forces of Japan. However, the reason, of course, is not that. The true reason is the discrepancy between the growing ambitions of Japanese industry and the desire to produce their own planes. Both projects developed in an atmosphere of modesty, which is inherent in all real samurai, their creation went without too much hype, you can even say in complete secrecy.

Anti-submarine aircraft P-1 is equipped with 4 Japanese TRD Ishikawajima-Harima Heavy Industries XF7-10, 60 kN each. In 2005, these aircraft engines were tested on board the experimental flying laboratory C-1. The equipment of the anti-submarine aircraft includes a modern Toshiba HPS-100 radar with AFAR, a complex of optoelectronic sensors and a magnetometer, which is designed to search for submarines at relatively short distances (this device is similar to that used on the prospective American P-81 “Poseidon”, which was purchased Indian Navy). 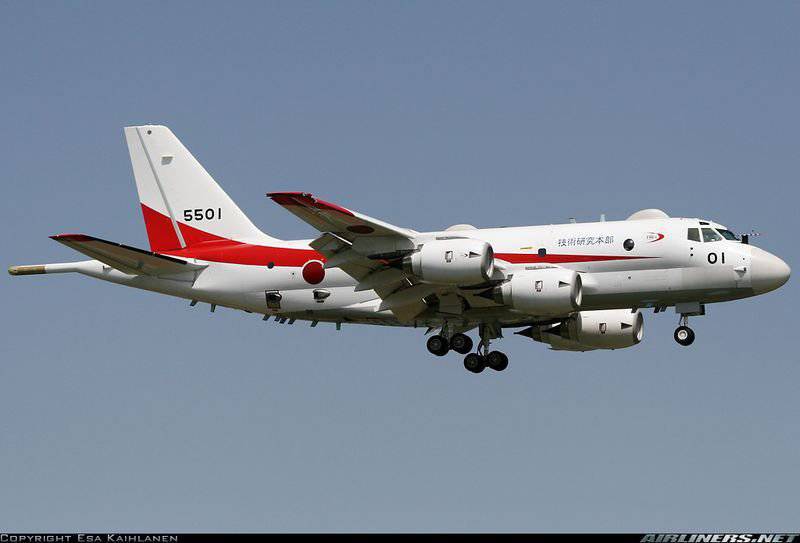 To increase the combat effectiveness of the aircraft, as well as facilitate the work of its crew, the Kawasaki P-1 was equipped with systems with artificial intelligence, in which Japan has traditionally been very strong. For example, the flight control system available on an aircraft should form several possible submarine attack scenarios at once and recommend the best option based on the circumstances. Also interesting is the fact that the P-1 will be the first in the world to implement a new type of control system - fiber optic. Compared to the traditional - wire-based control system, the new system will have a significantly greater resistance to the effects of an electromagnetic pulse in a nuclear explosion and problems of electromagnetic compatibility.

The equipment installed on the anti-submarine aircraft is designed for the perception of all the spectra of the physical fields of the submarine. In addition to the radar with a phased antenna array and a magnetometer, there are radio acoustic buoys, television and low-level infrared sensors on board. Anti-submarine aircraft P-1 equipped with a cargo hold, which can accommodate anti-submarine torpedoes or free-fall bombs. Anti-ship missiles can be installed on the 8 underwing pylons. The maximum combat load of the aircraft is 9 tons.

Many experts are skeptical of this machine, which is almost identical to the cost of the American Boeing P-8 Poseidon, which cost the Indian Navy at a price of 220 million dollars per plane. At the same time, the data of the Japanese aircraft do not reach the US patrol aircraft. Although the P-1 is superior in maximum flight speed at 100 km / h (which is not the main indicator for an anti-submarine aircraft, especially since the difference in cruising speed is 3 times less), the Japanese aircraft has a shorter flight range by 1000 km. This is equivalent to reducing the patrol time by at least 1 hours. In addition, the crew of the Japanese aircraft consists of 13 man (2 pilot), while on board the Boeing P-8 Poseidon is 9 man (2 + 7). On the one hand, this may indicate a variety of equipment used by the Japanese, and on the other hand, it is indirect evidence of less automation of processes. Although the Japanese are generally recognized leaders in the field of electronics. 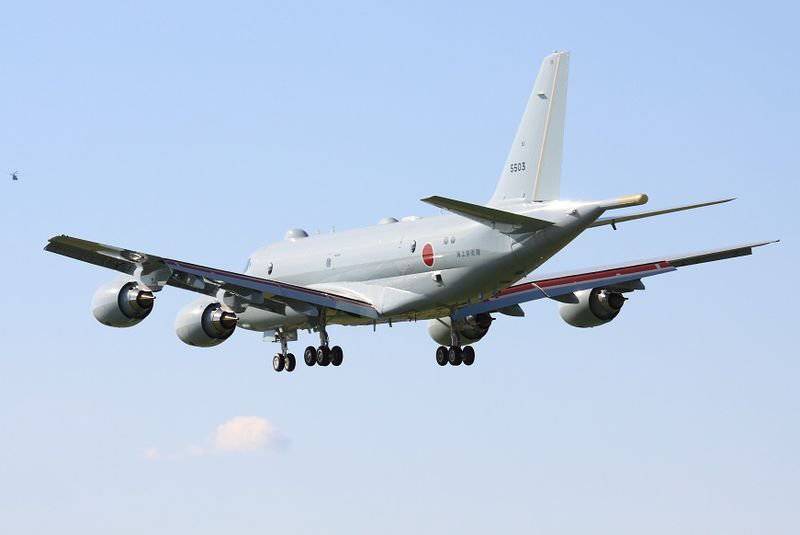 In general, based on the calculation of the cost of the car and the cost of its maintenance, a sufficiently large number of experts believe that Japan would be much more promising to enter into cooperation with the United States to create the Poseidon, or simply to buy these planes. But the descendants of the samurai chose a different path, deciding to embark on the path of an independent military aircraft.

Ctrl Enter
Noticed a mistake Highlight text and press. Ctrl + Enter
We are
Reactive firstborn LavochkinaAn-12 in Afghanistan
16 comments
Information
Dear reader, to leave comments on the publication, you must to register.