International Arms Trade Treaty: a blank document or a draft against Russia? 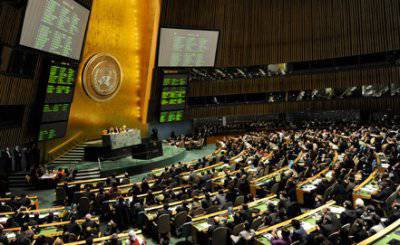 April 2, 2013 - in effect, the date historical, - the UN General Assembly held a vote on the International Trade Agreement weapons (ATT). For the resolution that gives the draft ATT the final status, 154 states voted. Syria, Iran and North Korea spoke out against the adoption of the document: for some reason they believe that the document will allow major arms exporters to dictate their terms. In addition, the Syrian government understands perfectly well: the ATT will not become an obstacle to arming the so-called "opposition" by the states of the West and the Persian Gulf. Because of three votes “against” consensus was not reached, and the document was put to the vote of the General Assembly. Twenty-three more countries, including the Russian Federation, Belarus, Bolivia, Venezuela, China and Cuba, abstained. The resolution calls on “all states to consider signing the Treaty” and joining it “as soon as possible, in accordance with their respective constitutional procedures”. All types of conventional weapons (Tanks, armored vehicles, large-caliber artillery systems, combat aircraft and helicopters, warships, missiles and missile launchers, small arms and light weapons). Control will also be exercised over the export of ammunition and spare parts for military equipment. The ATT will be open for signature on June 3 and will enter into force provided that fifty UN member states ratify it.


Before the vote, the permanent representative of the Russian Federation to the United Nations, Comrade. Churkin saidthat the draft ATT "has significant flaws, as well as provisions that cause at least doubts and questions."

The fact is that Russia proposed to include in the draft Treaty a provision on the prohibition of the supply of weapons to “unauthorized non-state actors”. However, Western countries did not agree.

According to Comrade Churkin, the lack of a relevant provision in the document “will inevitably affect the effectiveness of the implementation of the ATT”. The Permanent Representative believes that the draft treaty contains “some positive moments”, but does not reach the standards of the arms trade, which are already used “not only in Russia, but also in many other countries.” Comrade Churkin said: "We intend to work out the draft treaty in Moscow in the most thorough way, after which we will decide on the expediency of joining it."

In principle, the document contains a provision according to which, after 6 years after the entry into force of the Treaty, “any State Party may propose amendments”. These amendments will be considered at the ATT conferences every three years. But who will accept the Russian amendments?

In contrast to Comrade Churkin, Mr. Ban Ki-moon, the UN Secretary General, warmly welcomed the approval by the General Assembly of the WTD project.

Organization Secretary General expressed confidencethat the treaty will become a powerful new tool to prevent gross violations of human rights and international humanitarian law. The ATT, in its opinion, will add momentum to global disarmament efforts, as well as help combat weapons from falling into illicit trafficking.

Ban Ki-moon called the ATLA "balanced and durable" agreement, despite the opposite remarks made by the delegations of a number of UN member states, including the Russian permanent representative V. Churkin.

Как explained Mikhail Ulyanov, director of the Russian Foreign Ministry’s security and disarmament department, who led the Russian delegation at negotiations on the ATT, Russia abstained from voting because the text contains insubstantial wording: “We have a certain disappointment that the agreement, declaring good goals, essentially turned out pretty empty. There are many slogans, but not much concrete. Tasks are formulated only in general terms. And how exactly to implement them, the contract does not give the submission. " Comrade Ulyanov said this in an interview with the Kommersant newspaper. Like V. Churkin, he noted that Russia did not succeed in securing the rule in the Treaty, according to which weapons cannot be delivered to unauthorized non-state actors.

Russia unsuccessfully tried to include in the draft ATT a provision on the inadmissibility of its “re-export” (re-sale). "Russia stands for the suppression of the flow of arms from controlled legal inter-country circulation into uncontrolled illegal circulation, - He explained Sergey Denisantsev, an expert at the Center for the Analysis of Strategies and Technologies, told the Nezavisimaya Gazeta correspondent. - Russia offered the rest of the countries to adopt its system of export licensing and control over the supplied weapons. We are talking about, for example, the introduction of an end-user certificate, indicating that a weapon acquired by an importer cannot be transferred to third parties. Or about the impossibility of exporting weapons without the sanction of the president, as is customary in Russia. ”

In the case of signing the ATT 3 June, the export of weapons in accordance with the provisions of the Treaty will be banned if suspected, if the weapon can be used for genocide, crimes against humanity or war crimes. Arms supplying countries will have to ensure that their products do not go to the black market and to terrorists. However, the Syrian ambassador to the UN, Bashar Jafari, did not in vain remind him that his country was not satisfied with the absence in the text of the Treaty of mention of non-state terrorist groups, because some of the countries supporting the Treaty, According to him, "Are actively involved in supplying terrorist groups in Syria with various types of lethal weapons."

However, the signing of the draft by fifty countries, in the words of Denissentsev, is “the second part of the epic”. After all, the process of ratification of the ATT “may take several years until parliaments of at least fifty countries approve it. Difficulties with the passage of an ATT are expected not only in the US Congress, but also, say, in the Indian Parliament ... ”

As told "Kommersant" an anonymous participant of the Conference on the preparation of the MLTO, the practical effect of the Treaty will manifest itself mainly in the field of transparency of the world arms trade. Affiliate countries will be required to report annually on deliveries of eight categories of weapons. Today, less than 40% of states submit relevant information to the UN voluntary register of conventional weapons.

Vadim Kozyulin, PIR Center expert, clarifiesthat in the ATT there is no mechanism for monitoring the execution of the contract and punishment for its violators. The right to impose sanctions on suppliers will remain the UN Security Council. In addition, each exporting country will, as before, determine for itself whether there is a risk that the importing state will use weapons for “serious human rights violations” or “genocide”, the interpretation of which is not agreed in the text.

Mikhail Ulyanov, who mentioned the press that the Russian proposals did not pass, mentioned: “Probably, someone wants to be able to supply weapons to anti-government groups in countries where the regimes are inconvenient for someone.” On the question of whether Russia will join the ATT, a diplomat answered: “We need to make sure that the treaty will not create for us any problems for the legitimate arms trade.”

In this connection, the opinion of V. Kozyulin, which Recallsthat the authorship of the ATT is owned by former British Foreign Secretary Jack Straw. The expert suggests that the reason for him to try to bring to the logical conclusion of the initiative in the field of global control over the arms trade was the realization that the list of countries covered by the EU arms embargo has always been much wider than the list of countries subject to similar UN sanctions. In practice, this meant that the EU, China, Belarus, Myanmar, Sudan and Syria under the arms embargo could easily buy weapons from “less scrupulous” suppliers, and first of all from Russia. The EU did not like this situation, the expert believes.

That’s why Russia's accession to the ATT is very problematic. If the contract is developed by the West and takes into account the interests of the West to the detriment of the interests of Moscow, then probably it should be measured seven times - and ... not cut off. Let us recall the words of the wise comrade Churkin: "We intend to work out the draft treaty in Moscow in the most thorough way, after which we will decide on the expediency of joining it."

Remember the first day of signing: 3 June. Why is the date so important? Yes, because 31 may expire on an arms embargo on the opposing sides in Syria. And the hotheads from the EU - the Frenchman Hollande and the Englishman Cameron - previously stated their desire to even break the embargo.

As for Russia, after May 31, it can, on quite legal grounds, supply the “Assad regime” with a variety of weapons. It will be impossible to predict whether the Kremlin will deliver something to Damascus or not. It is only known that, given this opportunity, Bashar Asad recently turned to the BRICS countries for help. The Chinese can also help the government and the people of Syria withstand the fight against terrorists, mercenaries and bearded gangsters. With the very ones who in the West are listed as liberators and fighters against the “genocide” arranged by President Al-Assad to his long-suffering people. Only in order for Russia or China to help Assad, they will have to refuse to sign a dubious ATT.

Observed and commented on Oleg Chuvakin
- especially for topwar.ru
Ctrl Enter
Noticed a mistake Highlight text and press. Ctrl + Enter
We are
"Non-Arab Emirates": migrants in the Gulf countriesGeopolitical mosaic: the UN adopted a resolution on the ATT, and Russian experts believe that the production of shale hydrocarbons will be balanced at the limit of profitability
35 comments
Information
Dear reader, to leave comments on the publication, you must to register.