April 4 2013
16
The other day, the capital said farewell to the People’s Artist of Russia Valery Sergeyevich Zolotukhin, who died on March 30 on the 2013 year of 72. A civil memorial service was held at the Tagan Theater 2 on April 12: 00. For many years, the famous actor played in this theater, and then headed it. On Wednesday, April 3, the actor’s funeral was held at the Epiphany (Yelokhovsky) Cathedral. In total, during his career, the actor managed to play in 80 films, including: “The master of the taiga”, “Bumbarash”, “The Tale about how Tsar Peter Arap married”, “The Magicians”, “The Life and Extraordinary Adventures of Soldier Ivan Chonkin” and many others. In condolences over the death of the actor, Russian President Vladimir Putin noted that Valery Zolotukhin was a real folk-born man, a man of amazing charm and talent, breadth of soul and creative generosity.


Valery Zolotukhin was born 21 on June 1941 of the year one day before the start of World War II in the village of Fast Source of the Altai Territory. His father was Sergei Illarionovich, who in 20-ies served as chairman of the combo, and then was chairman of the district executive committee, the mother of the future artist Matrena Fedoseevna worked on a collective farm. In addition to Vasily in the Zolotukhin family, there were also 3 children: two sons, Volodya and Ivan, and a daughter, Antonina. When Valeria turned 7 years old, a misfortune happened to him. The boy fell out of the second floor of the kindergarten and although the height was small, he was injured - a knee injury. However, timely medical care was not provided to the child, and it could have done more harm to him. The boy was put plaster from hip to ankle. Fortunately, there were lice under the plaster, and it had to be removed, otherwise the boy could remain crippled for life.

After that, Zolotukhin was sent to a sanatorium, where he was diagnosed with a terrible diagnosis of bone tuberculosis. Doctors said that he most likely will never walk. He lay bedridden for several years, walked to the tenth grade with the help of crutches, ignoring the ridicule of adolescents. From childhood, he dreamed of becoming an actor, and even despite the illness he was walking towards his goal. They laughed at him both at school and at home - where, they say, you are cast as actors, even if you cannot walk normally. However, Valery overcame his illness with fantastic persistence, overcoming pain, he did everything to put crutches aside for ever. Already in the 10 classroom of the school at the New Year's Eve party, he literally shook all his acquaintances by dancing to “Apple”. 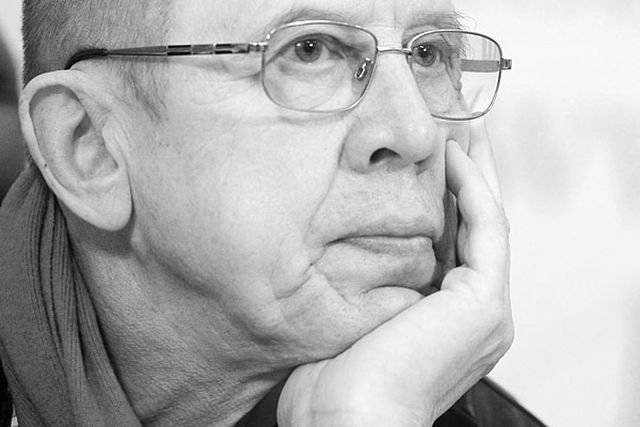 After graduating from high school, a lame boy from the Altai backwoods went to the capital to enter GITIS for the operetta department. In Moscow, the future actor even had no place to stop, so on the eve of the entrance exams he slept on a bench in a public garden near the institute. Before the selection committee, he appeared to be such a “dandy” - unkempt, unwashed, wearing a hat and bloomers. No one — not even the people closest to Zolotukhin — believed in his success, but he nevertheless went to college. His natural charm helped - neither Siberian speaking, nor appearance, nor lameness, which was generally unacceptable for an artist, the examiners simply did not notice.

In 1963, he brilliantly graduated from GITIS and got a job in Tetra. The Moscow City Council, in which, however, worked the entire 1 year. Already in 1964, the novice artist went to work at the Taganka Drama and Comedy Theater, who remained faithful throughout the years to come. He came to Yury Lyubimov together with his wife Nina Shatskaya, who by that time was a famous actress.

In the theater, Valery Zolotukhin played a large number of diverse roles, among which are Grushnitsky (“Hero of Our Time”), Grigory Otrepyev (“Boris Godunov”), Andrei Nakhodka (“Mother”), Glebov (“House on the Embankment”), Zhivago (“Doctor Zhivago”), Fyodor Fomich Kuzkin (“Alive”), Marquis de Sade (“Marat and Marquis de Sade”). In the play “Feast during the Plague”, the actor managed to play 4 at once in different roles - Herzen, Don Guan, Mephistopheles and Faust. In parallel with playing on the theatrical stage in 60, Zolotukhin began to act in films. In 1965, the first film was released on screen. It was the historical adventure film “Package” in which he played Peter Trofimov, this role brought the actor the first wide fame. 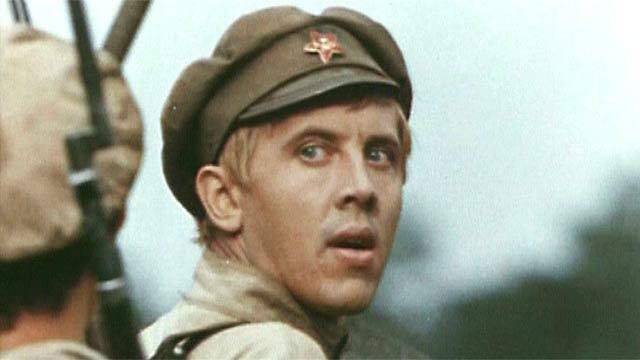 In 1968, Valery Zolotukhin played his first really big movie role, he starred in the film “Taiga Master”. In this film, Zolotukhin played very well the district Serezhkin, and his companion on the set was the famous singer Vladimir Vysotsky, who played the role of brigadier Ivan Ryaby in the film. This film was an unprecedented success - more than 27 million viewers watched a picture.

In 1971, a film came out on the screens of the USSR, which brought the actor a long all-Union glory - it was an eccentric musical comedy "Bumbarash" by Abram Naroditsky and Nikolai Rasheyev, shot from Arkady Gaidar's early works. The role of the former soldier of the tsarist army, an ordinary country boy who tries to survive in the chaos of the outbreak of the Civil War with all possible peasant wit and cunning, became an iconic Valery Zolotukhin’s career, and the actor himself became associated with it for many years.

They say that this role went to Zolotukhin because of his arrogance. At that time, Mikhail Kononov also claimed the role of Bumbarash, but Valery approached the film director with the words: “If you want to make a good film, then invite Kononov for this role, but if you want to look into eternity, invite me.” So it was actually or not, now it is difficult to say, but the prediction came true. “Bumbarash” became one of the best Soviet 1970 films, and the songs from that picture were sung by the audience for many years. This role has become a real business card of Valery Zolotukhin. 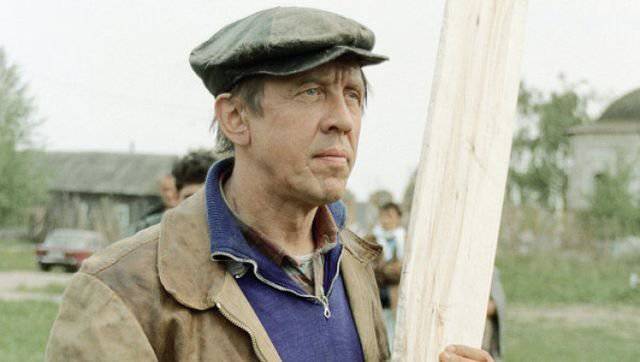 At the same time he was a talented, original and extraordinary actor who could easily get used to any role. Which was confirmed in his further work. In 1987, Valery Sergeevich Zolotukhin was awarded the title of People's Artist of the RSFSR. The actor continued to be removed a lot in modern Russia. You can highlight his role in the series "The Site", "Brezhnev", "The Master and Margarita". In addition, the actor starred in modern Russian blockbusters “Night Watch” and “Day Watch”, “1612: Chronicles of Time of Troubles”, “Black Lightning” and others.

In “Patrols”, filmed by Timur Bekmambetiev, the actor unexpectedly played the role of a vampire for many. You can have different attitudes to these pictures, but they only show how diverse and unique actor Zolotukhin was. Again, not many actors of his generation could boast that modern teenagers love and recognize them. Valery Zolotukhin was equally loved by viewers of different ages, so that such an “unfadingness” of talent for the 70-year-old actor could be justly proud of.

In addition to the work in the cinema, the actor was engaged in voice acting. Few people know, but the hero of the American blockbuster "Wanted", as well as one of the main characters of the cartoon "9" speak with his voice. In addition, his biography includes significant things for many Soviet viewers. It was in the voice of Valery Zolotukhin that the hero of Ostap Bender from the immortal work “12 chairs” performs the song “There, among the Pampas”. In addition, in the beloved comedy film “Ivan Vasilyevich changes his profession,” the song of the hero Georges Miloslavsky “Suddenly, like a fairy tale, the door creaked” was also performed by Valery Zolotukhin. 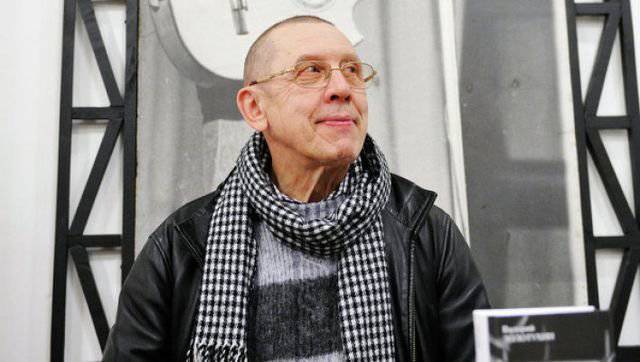 In the life of the actor there were three women, each of whom bore him a son. From his first marriage with Nina Shatskaya, he had a son, Denis, now a priest, Father Dionysius. From the second marriage, the actor had a son, Sergei, who, unfortunately, tragically cut short his life, he committed suicide in 2007. The son of actor Ivan from his third civil wife - actress Irina Lindt was born in 2004 year.

11 March 2013, the health of the actor has seriously deteriorated, he lost the opportunity to move and speak. 14 March with the help of special medicines it was placed in a state of artificial coma. The doctors decided to take this step, because they did not decide to carry out the operation to remove the brain tumor found in the actor; they could only alleviate his suffering. 30 March 2013, Valeriy Zolotukhin has passed away. In accordance with the will of the deceased, he will be buried in the territory of the Temple of the Intercession of the Most Holy Theotokos he built in his native Altai village, Fast Source, where he was born.