With a gun against the tank

April 4 2013
11
After the end of the First World War, which gave a start to the widespread use of special pistols for launching signal and lighting rockets, in Germany for some time did not develop such means, considering the 1915-1918 samples that were in service. quite suitable, but at the end of 20-ies in the framework of the broad modernization of the Reichswehr’s weapons, manufacturers weapons technical assignments were issued for the new signal pistols. Of the samples proposed by various firms for adoption, they chose a signal pistol made by the Walter Company; 1928 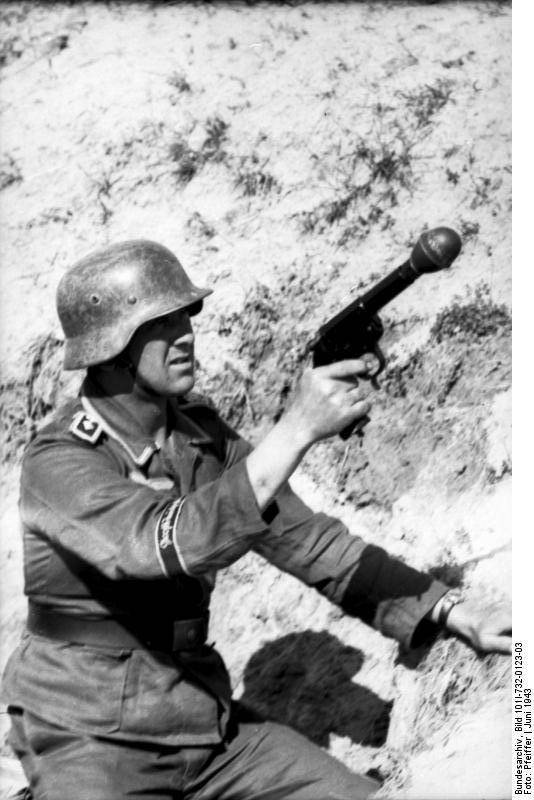 During the search operation of this pistol, in 1929-30. it was suggested that it could be used not only as a “thrower illuminating the terrain of balls”, but also for firing more serious ammunition. So that a thin-walled pistol with a diameter of 26,7-mm (hunting 4 caliber) could withstand a solid charge of gunpowder necessary to eject any serious ammunition, it was equipped with an additional supplementary stem, made in the form of a metal sleeve, the length from breech to muzzle.

The first ammunition for throwing a pistol was a fragmentation grenade arr. 1924 g., Which instead of the characteristic wooden handle was attached to a special shank, containing an expelling charge and a remote device. Such a converted grenade was called Wurfkorper 358 LP. However, the life of this ammunition was short. The great resistance in flight and the relatively low efficiency in the explosion forced the German gunsmiths to look for other solutions. One solution was proposed after the fighting in Poland and was to replace the grenade arr. 1924 on ovoid grenade arr. 1939 g. New throwing mine called Wurlkorper 361 LP. At the same time, taking into account the increase in the propellant charge, the firing range of the grenade launcher increased, and thanks to the best aerodynamic qualities of the mine, its accuracy of hit was also improved. Subsequently, the design of the shank was slightly reworked, which allowed the use of a grenade without a stalk at a distance of up to 100 m. (Wurlkorper 361 LP nA). 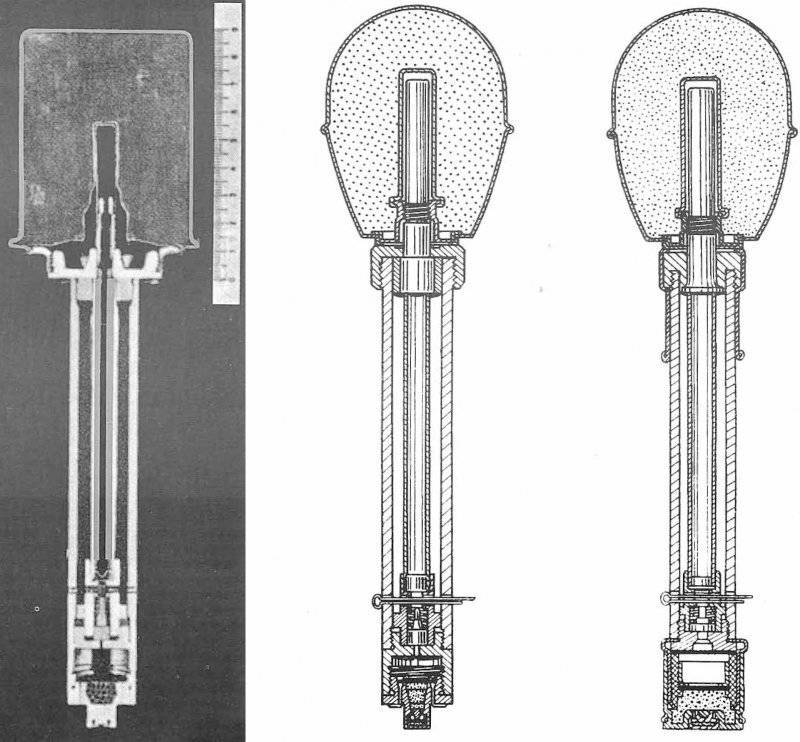 The next attempt to use pistols against tanks In 1943, the Walter company developed a high-strength combat pistol and developed a round with a cumulative PWM 1 grenade. This grenade was mass-produced for infantry units and was successfully used against tanks, penetrating armor up to 150 mm thick. Made for use in pistols, its version was called Wurfmine N 62 LP, but despite the promising results obtained in the tests, it was not accepted for service. The reason for this was the exact lack of accuracy of hits at a distance further than 30 m, since with an increase in the propellant charge the grenade began to tumble.

Taking into account the errors obtained in the manufacture of experienced grenades, at the end of 1941, a design recognized as successful was developed. It was the Panzerwnrfkorper 42 LP Grenade, which had a streamlined body, an extended shank and intended for use in rifled barrels. Stabilization by rotation normalized the trajectory of the grenade, and the accuracy of its hits at a distance of 75 m was found to be good. A new grenade could pierce armor with a thickness of up to 80-mm and was actively used for firing from Walter assault pistols weighing 2,45 kg using a shoulder rest. 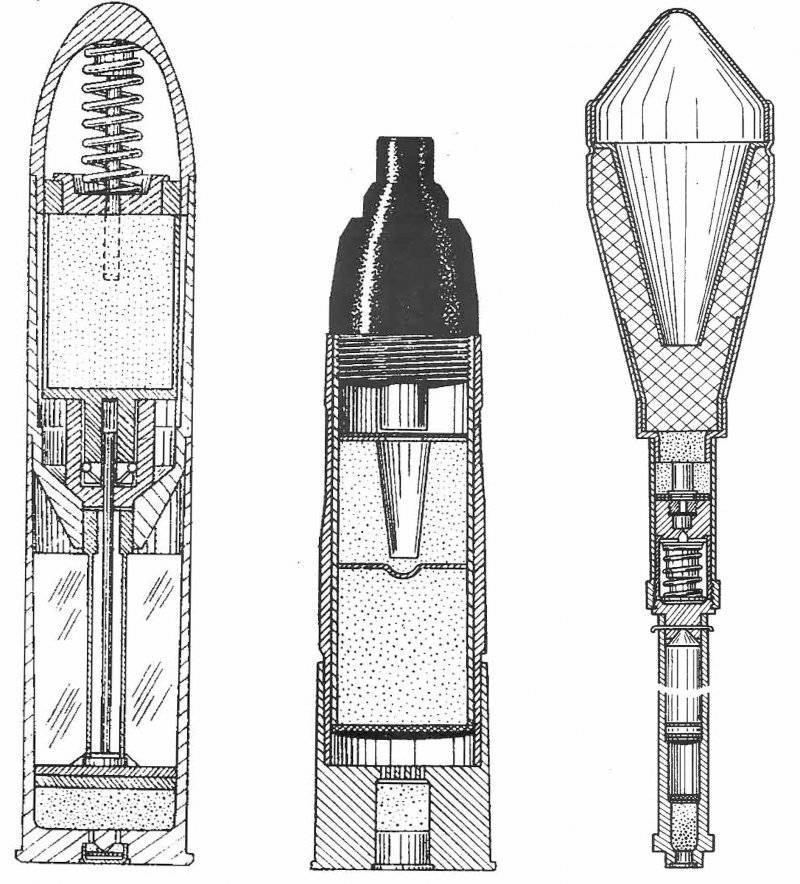 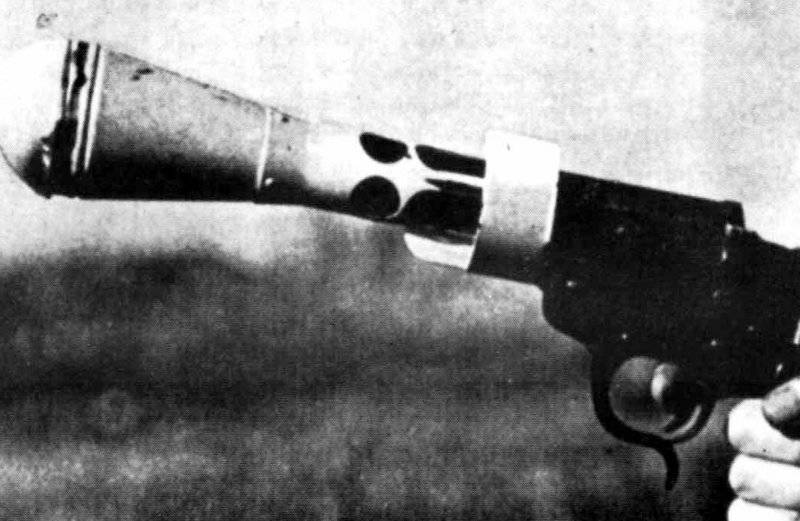 The last known ammunition for assault pistols was a grenade in the cartridge with ready-made cuts. It was a fragmentation shock grenade, equipped with a very strong explosive - an alloy of trotyl with hexogen. Due to the spiral protrusions on the hull, the grenade received a rotational movement around its own axis when fired, and thus the problem of its stabilization in flight was solved. Despite its small size, the grenade contained a sufficiently powerful bursting charge named 22 of the alloy of trotyl and hexogen. The blaster of an instant-action grenade was very sensitive and, protruding from its body forward into a thin cylindrical, was given the nickname “cigarette”. The grenade was not recommended to use pa distance less than 50 m from the intended purpose, due to the danger to the shooter.

Ctrl Enter
Noticed oshЫbku Highlight text and press. Ctrl + Enter
We are
Intermediate, which became the main. The history of the creation of the cartridge 7,62 × 39 mm7,62 mm rifle and machine gun cartridges
11 comments
Information
Dear reader, to leave comments on the publication, you must to register.