April 4 2013
1
February 16, 1940 (i.e., even before the start of the S-2 tests) aviation The designer Beriev, specializing in the creation of seaplanes, handles the People’s Commissariat for Aviation Industry with the design of the B-10 high-speed aircraft. In the presented draft design, the B-10 was defined as a fighter-interceptor or dive bomber. The aircraft carried out according to the two-beam low-wing scheme carried many innovations: a three-wheeled landing gear with a nose support, a wing with a laminar profile NACA 23012, twin engines M-107 with pushing coaxial four-blade screws. According to calculations on the B-10, it was supposed to get a maximum speed of 313 km / h. 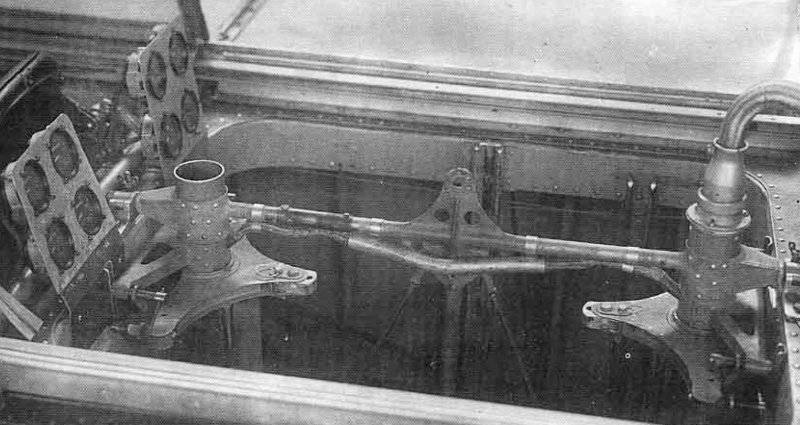 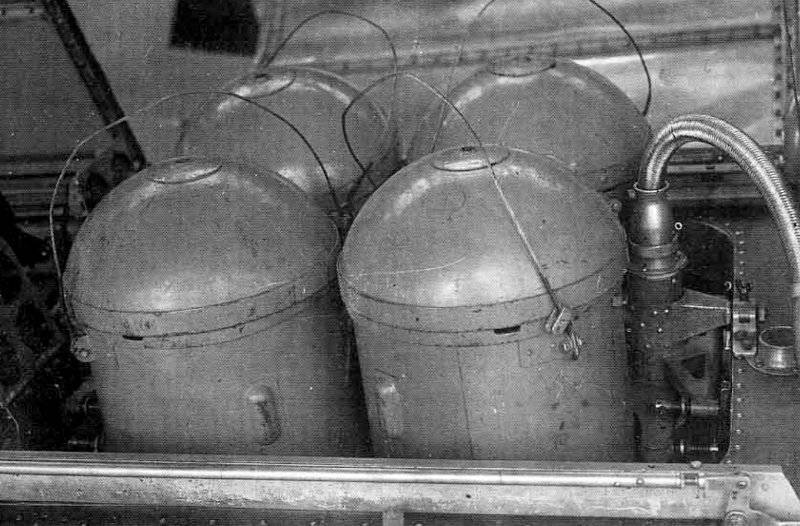 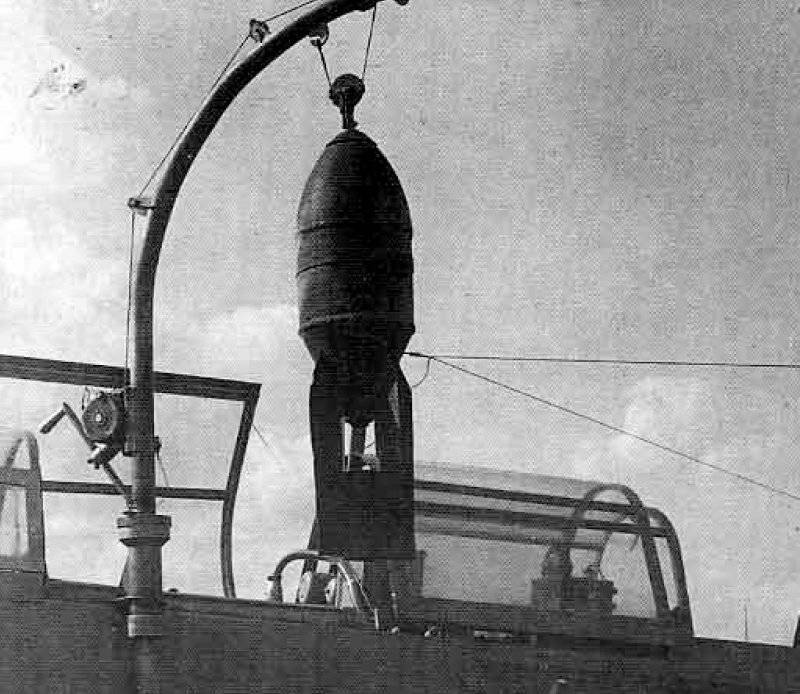 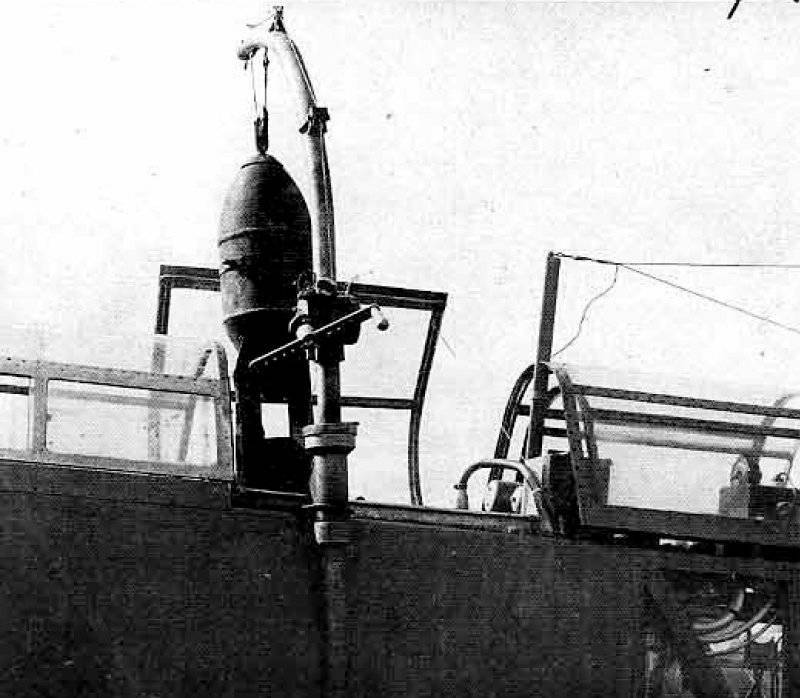 Loading bombs in the cargo bay with a crane.

The lanterns of the cabs are closed, and the lantern of the cargo compartment is open for loading / unloading bombs.

Project B-10 was considered in the General Directorate of Aviation Supply of the Red Army (GULS KA). In conclusion, it said that the aircraft was quite real and its development could be included in the 1941 plan. However, due to the heavy workload of the Beriev Design Bureau, the development of promising hydroplanes, it was proposed to entrust the work on B-10 to Bolkhovitinov. the latter already specializes in a similar subject.

In accordance with the Government’s decision on 18 in March 1940, further work on the B-10 was entrusted to Bolkhovitinov, moreover, in his design bureau, he received the designation “I”, AM Isaev was appointed as the moderator on the aircraft.

The draft project "I" was submitted to the NCAA Expert Commission and approved by it on September 21 1940 g. In general, the project was reminiscent of the Berium B-10. however, the engines were supposed to be M-105 (as more real], the wing area was reduced to 20 sq. m, the maximum speed was assumed to be 675 km / h. Later they were still oriented on VI-107, the task of creating its Sparky was assigned to Rybinsk Engine Plant No. 26.

The development of the "I" was carried out until the spring of 1941, mainly the construction used on the "C" aircraft was used. At the same time, there were many new things. In particular, the fender-fuel tank is made of an electron, with a skin thickness of up to 4 mm. The technology of production of an electron, methods of manufacturing parts from it and much more was mastered. The plane was already started by construction, when suddenly, on April 25 1041, Bolkhovitinov was summoned to meet with the Deputy Commissar of the aircraft industry for engine Balandinu, Director of Plant No. XXUMX Lavrentiev and engine designer Klimov were present.

The reason for the call was the refusal of the engines from the "mechanical two-way" M-107. In their opinion, the creation of such a power plant in the foreseeable future seemed little-real. M-107 Was very "raw" and uncommitted, it was believed that on this super-tense engine when installing an elongated shaft, at working revolutions dangerous resonant phenomena may occur that could lead to structural failure.

In addition, the engine had a huge plan for the production of serial products, were complex refinement of engines M-105, M-107, M-120.

As a “sweet pill”, Bolkhopiti-Povu offered to choose any engine from the available in the country and rework your project for it. Among the proposed and there was a diesel M-40. completely secret hitherto gizmo. Here on it the contracting parties and stopped. M-40 was also not yet going to bring it to the end, it was heavy, but consumed half the amount of fuel compared with the same type of gasoline engine m.

An attempt to adapt a diesel engine to the project "I" was not very successful. As a result, Bolkhovitinov returned to the old scheme, on the "C" type. In his letter to the government, he wrote:

"... I ask you to charge me, instead of the plane" I "... a single-engine plane, with M-40, on the basis of the previously built machine" C ", giving it weapon, shooting through the screw according to the wishes of Joseph Stalin (they say that Stalin, having examined "C", said: "Guard the fire at the front of the screw disk with the screw" - MM) ".

It is known that this new project was not further implemented and did not even have a name. However, it was assumed that this would be a typewriter with an absolutely normal scheme, with a single-fin tail. According to preliminary estimates, the speed of the vehicle was 5Я5 km / h pa 7000 m, bombs 500 kg, range 1200 km, armament 2x12,7 mm in front of one NTKAH back. 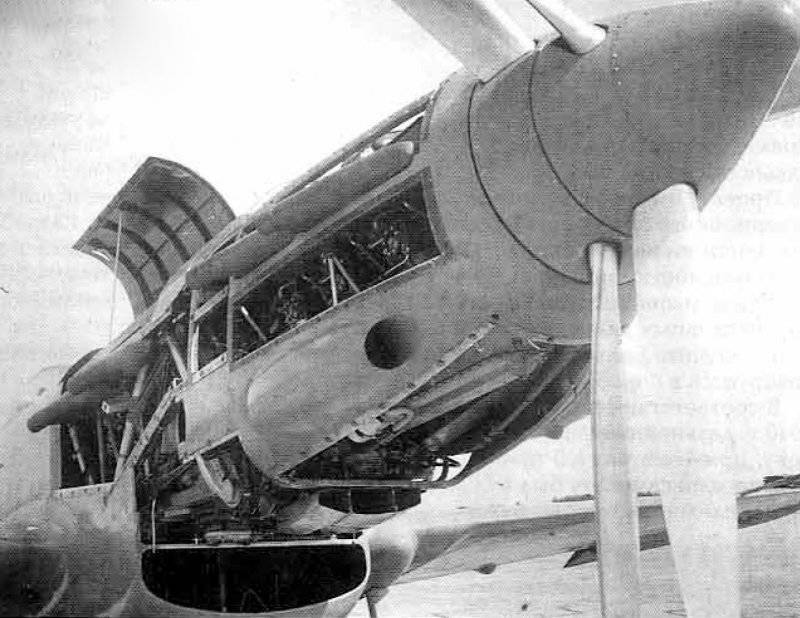 View of the engine installation of the C-2 aircraft from the side and front. 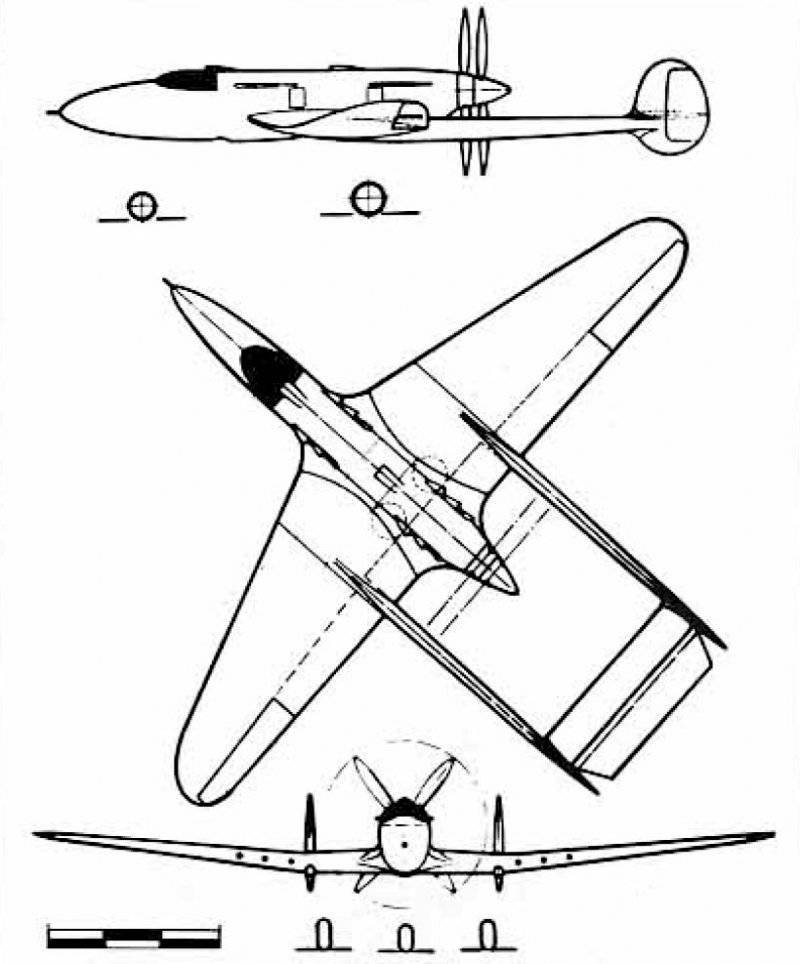 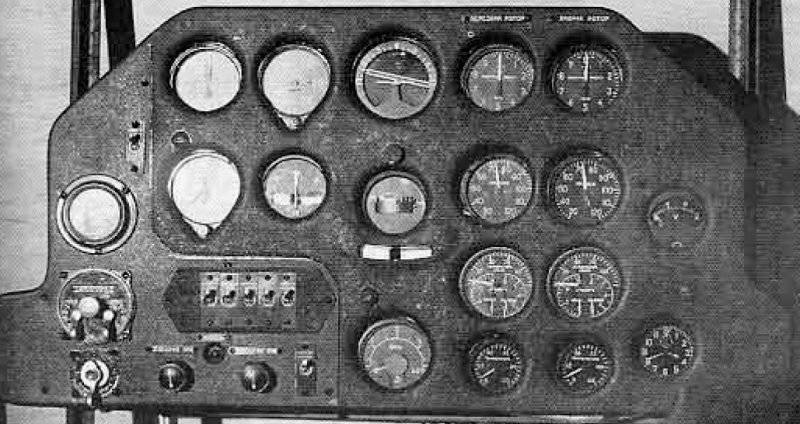 Instrument panel of the pilot C-2. 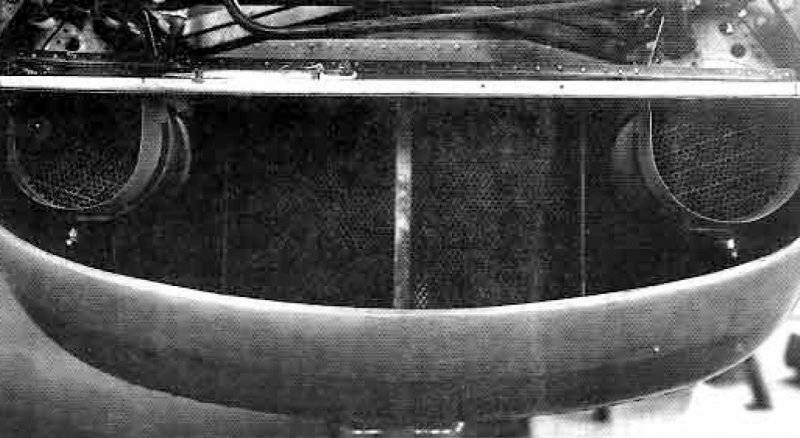 Type of radiators water and air-oil. 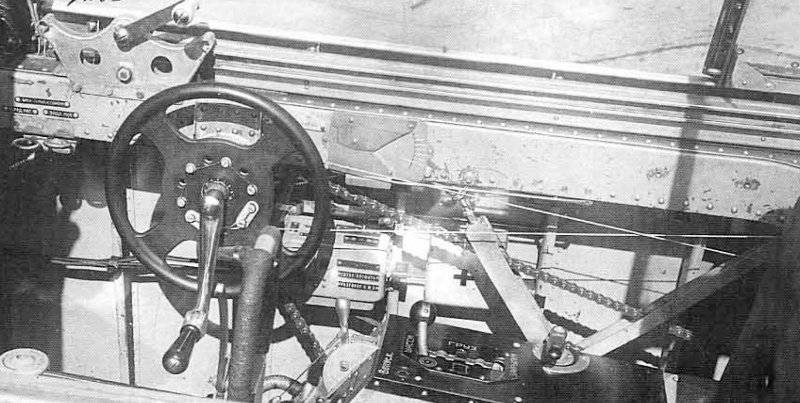 The location of instruments and controls on the right side of the cockpit C-2.

The location of instruments and controls on the left side of the cockpit C-2.

At the same time, Bolkhovitinov proposed a four-engine bomber "D" project, the main feature of which was the placement of M-40 diesel engines in tandem, one after the other. Work on the bomber were, however, were interrupted due to the outbreak of war.

In the autumn of 1941, the Bolkhovitipov Design Bureau (KB-293) was evacuated to the village of Bilimbay near Sverdlovsk, to the base of the Fotolot workshops. It was there in KB V.F. Bolkhoviti-Nova unfolded the epic of creating a BI-1 rocket fighter. Although the aircraft received the designation "BI" by the capital letters of its authors, Bereznyak and Isaev, many persistently deciphered the BI index as "Bolkhovitinov's fighter". 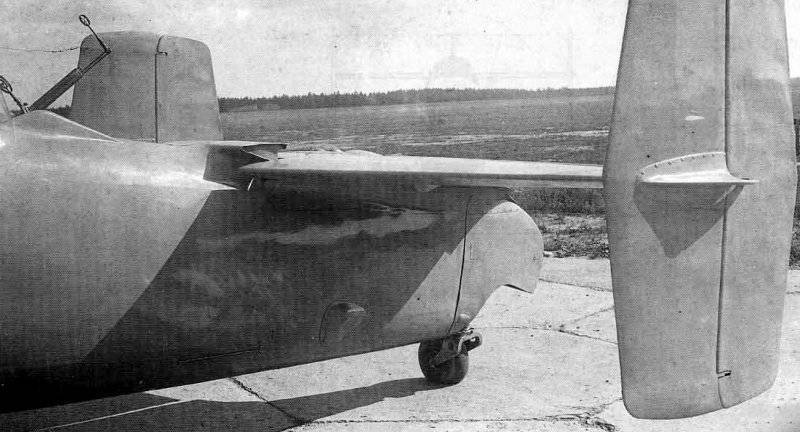 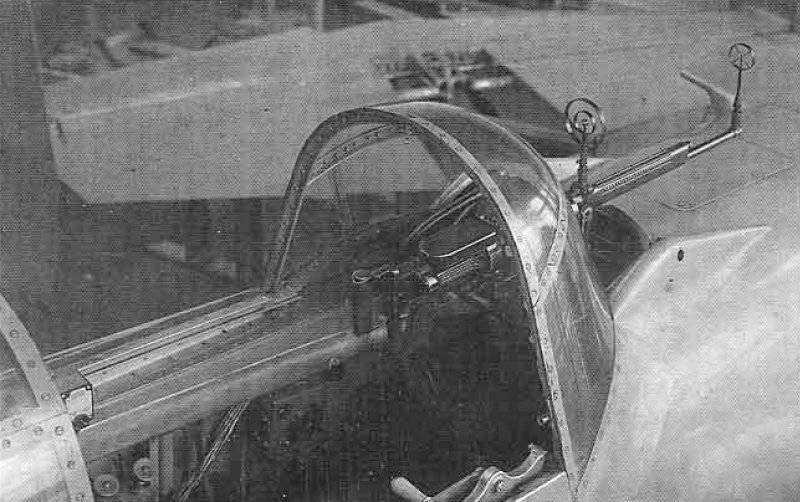 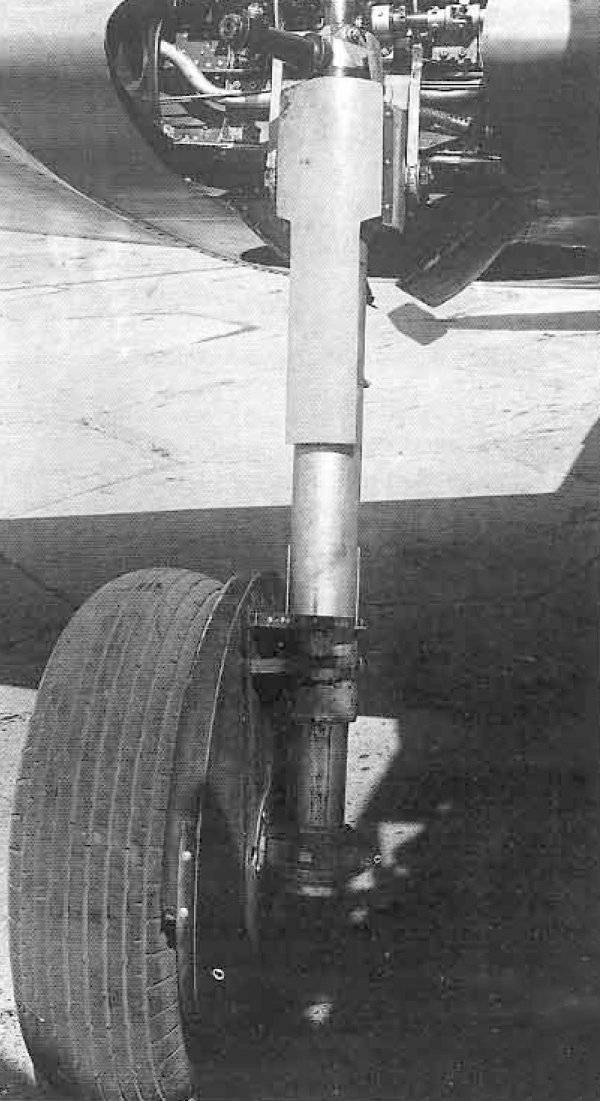 Leg with wheel and mechanism for cleaning and release of the chassis.

Important point in stories "C" seems to be that the aircraft fully displayed its appearance with a part of the global aviation development process, and in the Soviet Union it became the first flying machine with twin engines and coaxial propellers. All the events described occurred at the end of 1930 – s, when the limits of further increasing the speed of flight of airplanes with piston engines for most aviation specialists were finally determined. The increase in engine power, the increase in their height, with the existing design restrictions on the diameter of propellers, led to the need to increase the number of propeller blades, as well as their working surface. Of all the possible variants of the most efficient propellers, designers began to attract the attention of coaxial propellers. In the Soviet Union, research in this area was conducted at TsAGI, the results were first published in the middle of 1941:

1. The efficiency of coaxial screws for large relative moves (the large step of the screw, i.e., a large step corresponds to a high flight speed. - MM) is 2 – 4% higher than the efficiency of one of the single combination screws.

2. In the take-off mode, with the installation angles of the blades less than 35 °, the efficiency of coaxial screws is slightly less than the efficiency of single screws. With increased power factor values, coaxial propeller thrust on the takeoff mode is greater than single propeller with an equivalent coating (the latter term can be simply understood as the working surface of one propeller or a system of propellers. - MM).

4. A change in the distance between the combination screws within the limits allowed by design considerations (within the width of the blades) does not have a noticeable effect on the efficiency value ”.

Unfortunately, it was not possible to use the research conducted by Soviet aircraft manufacturers in practice during the war. After its completion, it became known from the captured German archives that in Germany during the 1941 — 45 period, extensive studies of coaxial propellers in the DVL wind tunnel, which almost coincided with Soviet results, were carried out. However, as you know, the Germans also did not have time to introduce coaxial screws into practical life.

In the midst of World War II, when the power of aircraft piston engines increased to 2000 l. with. and more, the installation of coaxial propellers rather actively began to be used in England and the United States.

The British company Rothol, which created in 1942 an experimental prototype of a power plant with coaxial screws, equipped it with the Sifire fighter by the end of the war. Similar installations were successfully implemented on two other experienced fighters: MB-5 and Hawker "Tornado".

In the United States, coaxial propellers were used on experienced XP-75, XF-14C and XB-42 fighter jets during the same period. However, the success was overdue. The triumphant ascent of gas turbine engines, which promise much higher flight speeds, has greatly narrowed the possibilities of using propellers in general.

Still, propellers with opposite rotation have been used. At the beginning of the 1950 – s of the design bureau of A.N. Tupolev, in search of increasing the flight range while maintaining a high rate of speed, the strategic bomber Tu-95 created. This outstanding machine, which was later transformed into a passenger Tu-114, and later in a modified combat Tu-142, flies to this day. Installed on the Tu-95 (Tu-142) four NK-12 engines designed by N. Kuznetsov develop 15 000 X power. with. each and rotate coaxial propellers. The powerful propulsion system, in combination with such screws, allowed the Tu-95 to achieve a flight speed of over 900 km / h during factory tests, which exceeds the speed of any propeller-driven aircraft ever raised into the air. 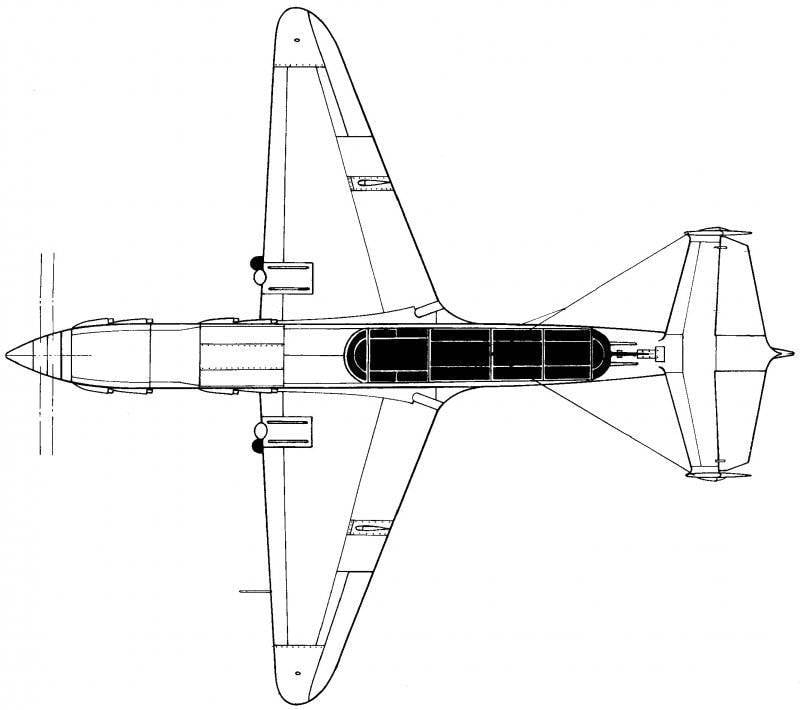 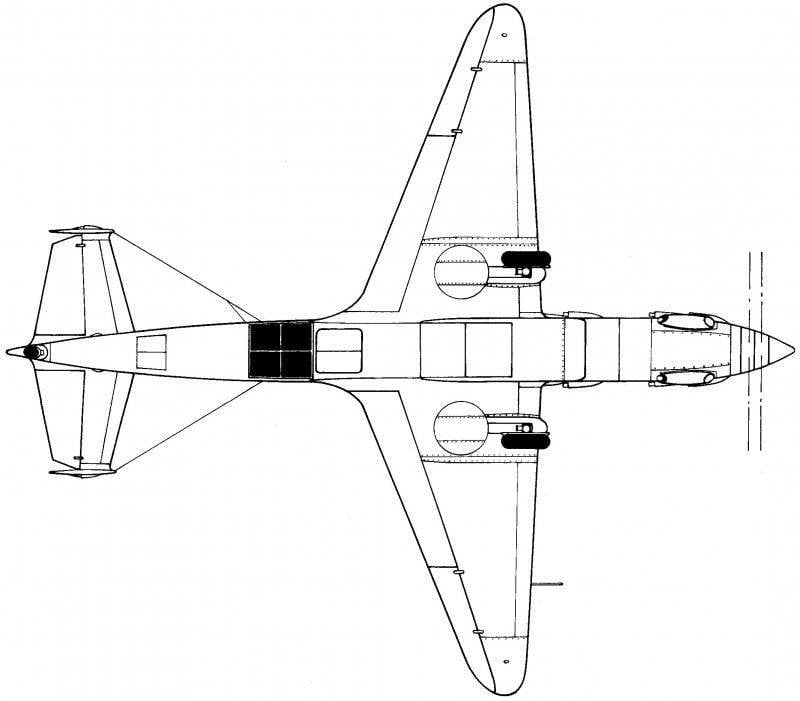