April 4 2013
77
4 April 2013 of the year near Novorossiysk (“Rayevsky” training ground) begins the next exercise of the Russian Armed Forces. The main difference from those exercises that ended a few days ago in the region is that the April 4-8 military maneuvers were defined as planned. This time fighters of the 108 of the paratroop regiment of the RF Airborne Forces will arrive at the military training ground. Military equipment will be dropped from the air with assault support from the 7 Guards Air Assault Division (mountain). In connection with the exercises that are unfolding in the south of Russia, the movement of vehicles on one of the sections of the Novorossiysk-Anapa highway will be restricted. 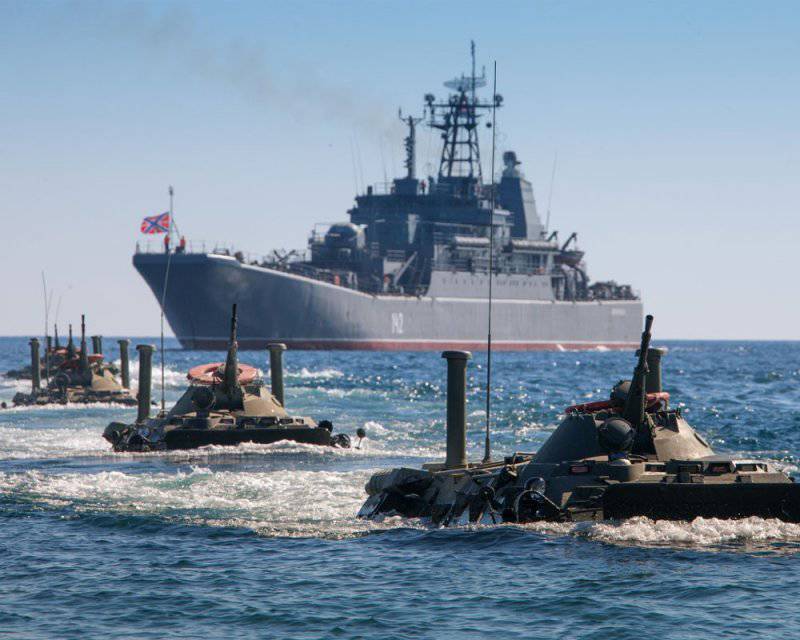 Such news cannot but please all those people who do not remain indifferent to the development of the Russian army and fleet. After all, such frequent and intense exercises on the southern borders of Russia did not exist for at least a quarter of a century, and, as a maximum, never at all. At least, this is the assessment given by military specialists who are involved history the armies themselves at one time took an active part in military maneuvers in various regions (and not only within the territory of our country).
And before the start of the new exercises, it would be nice to provide information about the teachings of the previous ones, the orders about the beginning of which were received by the troops recently.

It should not be forgotten that in addition to the sensational exercises in the Black Sea region, which received much attention, other military maneuvers were also carried out. Before describing these maneuvers, let us briefly touch upon idle talk about what, and suddenly, Russia decided to “rumble” on the Black Sea coast. Apparently, the “hunger of doctrines” had such a strong impact on their public assessment that, in order to begin their conduct, many are now looking for some kind of mandatory conspiracy thesis. It would seem that there is no longer such a thing as the need to constantly improve combat skills, tactics and strategy for conducting military operations by representatives of the army and navy ...

Some said that the exercises were military preparations for the Olympics in Sochi, others thought that Russia decided to certainly demonstrate the strength to its neighbors (for what purpose? ..), others even saw the training of Russian troops for the invasion of Syria ... In general, one can see that creativity for seekers of the background of the exercises does not hold. Apparently, the phrase “sudden teachings” was too impressive for many people in our troubled world. On this basis, they even began to calculate the options for how much time is needed to prepare the ship for sailing, and the military transporter for the flight, and over what time interval the signal from the commander-in-chief will go directly to the army barracks. But so in this the essence of the exercises held was. Significant failures of major exercises in the Central Military District just became delays or complete non-passage of signals through special channels. In general, it is worthwhile to return to this topic a little lower, but for now, about other exercises, which turned out to be somewhat in the shadow of the Black Sea teachings. By the way, if many gentlemen persistently searched for conspiracy in the exercises of the Russian troops at the Krasnodar and Crimean test sites, then you should then go to the end - look for it in other maneuvers of the RA and Navy of the Russian Federation ...
One of the training manifestations, which were almost not covered, was the command and staff exercises of the air defense, in which about half a thousand soldiers and officers took part, and up to 70 units of military equipment. The exercises were conducted at the Yurginsky training ground, where, in conditions of poor visibility and high winds, the servicemen worked out shooting tests. During the exercises, such military equipment was used as the Shilka-ZSU, as well as Strela-10 missile systems. In addition, the shooting was carried out calculations MANPADS. According to military experts, the shooting was conducted at a decent level and demonstrated the improvement of the level of professionalism of the Russian anti-aircraft gunners.

In the framework of the Siberian exercises, Buk missiles were used, only with the combat fire attack from the installations was not carried out, instead of which was used a variant of real tracking and conditional destruction of the air target (MiG-31 fighter-interceptor).

In the Central Military District, training sessions are being held to hone the skill of air refueling. According to the plans, the MiG-31 fighters and Su-24 front-line bombers are to be repaired at an altitude of about 5 km. After refueling, the aircraft went to impressive distances from their bases in order to fulfill the training tasks assigned to them.

The teachings of the sailors of the Northern Fleet, which took place in the Barents Sea, were completed. Here the destroyer "Admiral Ushakov", accompanied by two minesweepers, left the Kola Bay. The first goal is a nuclear submarine, which conditionally invaded Russian territorial waters. The second goal is air. Su-25 aircraft performed in its capacity. As a result, both training targets were hit by naval sailors of the Russian Northern Fleet.

Training camps are conducted by Russian troops and at a military base in Armenia. Here, at a special mountain training ground-complex, training exercises are conducted by fighters of the 102 of the Russian military base. In the course of the exercise, a full-scale deployment of anti-aircraft missile systems and intensive attacks by a conditional enemy are carried out. In these exercises involved one and a half hundreds of soldiers and officers and at least 30 units of equipment.
Airborne Troop Training also took place in the Ryazan Region. Within their framework, one can single out a unique segment of landing along with cadets of the Military High School of Military Administration named after Margelov for military priests. The priests in the full airborne ammunition participated in the operation of landing a military field mobile temple. For the landing used parachute platform P-7. The rally was held in the framework of the interaction of the Russian army and the Russian Orthodox Church.

If we sum up the number of personnel that participated in military exercises during the last week, then the total number reaches 10 thousand people. In addition, hundreds of units of naval, ground and air equipment were involved in the exercise, dozens of different control measures were carried out, the quality of interaction between individual units was assessed, the general condition of technical equipment, the success of the signal transmission, and much more were checked. Obviously, if the intensity of the exercises will not come to naught, then most of the problems of the combat readiness of Russian military units are leveled with time.

Naturally, there is such a category of people (and on the territory of the Russian Federation), who perceive information about the impressive scale of training in the Russian army with a clear negative. Should I pay attention to this position? The answer is obvious ... If for someone any manifestation of the Russian army’s combat capability is a reason for great hysteria, then such a person can only sympathize ... And if someone saw signs of “Russian militarism” in the frequent training maneuvers of the Russian army, then this is to the doctor ...

However, we will not be so tough with people who suffer from conspiracy delusions and phobias. After all, they themselves did not grow them in themselves. The reason for the progression of this "disease" can be considered the fact that for more than 20 years the Russian army, like a big bear, did not come out of hibernation. The reasons for this hibernation, each reader is well aware. And now it was enough for this bear to stick out its nose only slightly, sensing the warmth of spring, as the “forest” began to make noise and buzz: they say, but what did it seem like from its lair?

I would also like a couple of seasons of the Serdyuk-Makarov project of reforming the army, the public would completely forget that for the troops any exercises (though sudden, at least planned) are self-evident activities - well, perhaps, like lessons for schoolchildren ... People it was already beginning to seem that the entire reform of the Armed Forces was only a transition to outsourcing and rewiring one form (with shoulder straps) to another — with shoulder straps somewhere higher, forgive the navel ... However, recent events, thank God, returned most people, for which the fate of the army is not an empty sound, to consciousness. Active military exercises in various districts of Russia are a kind of sal ammoniac, after smelling the smell of which people begin to understand that before this, the Armed Forces had either a prolonged bad dream or something from the category of coma ... Now we are leaving it. But it turns out that there are “medicines”, technologies and specialists. It is gratifying!

Ctrl Enter
Noticed a mistake Highlight text and press. Ctrl + Enter
We are
The Ministry of Defense is starting to eliminate the Airborne Forces
77 comments
Information
Dear reader, to leave comments on the publication, you must to register.