April 4 2013
25
The bloody crimes of the terrorist "opposition" against civilians in Syria continue. 2 April evening, when most people returning from work, wants to spend time at dinner, at home, in the family circle - one of the Damascus suburbs, Jaraman, was shot at from mortars. As a result, 4 people died, 11 were injured. 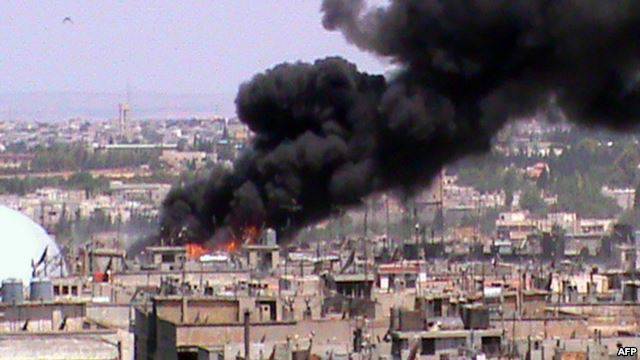 Rebellious Dzharamana - the long-standing goal of terrorists. The population of the city supports the legitimate authority, and the situation in it has not been able to "shake" for all this time. All attempts to capture Jaramana failed. Numerous explosions did not break the residents, mainly with the use of mined cars. Now the terrorists chose mortar shelling tactics and used it in this suburb of Damascus, killing innocent citizens.

On the same day, other areas near the Syrian capital were subjected to mortar attacks by militants of the so-called “opposition”.

Three mortar shells exploded on the outskirts of Damascus, in the area of ​​Al-Feih, in an agricultural nursery. This led to the death of the 4 man and the injury of the 25 peace workers. Damage to agricultural buildings.

The terrorists carried out another mortar attack in the residential area of ​​Al-Maklyabiya near Damascus. The mortar shell hit the house and killed four citizens - members of one family. Two of the dead are children.

A fair question arises - who will be responsible for these crimes? Who in the world will condemn the daily death of people at the hands of bloody terrorists? The UN is silent, human rights activists are silent, the “world community” is silent. And if there is any reply from there, then surely it will be an angry tirade against the legitimate government of Syria - about how it is destroying the “peaceful rebels” ...

In particular, a statement was made by the so-called “Syrian Observatory for Human Rights”, based in London, that March was the bloodiest month in the SAR. The inaccuracy of this “source” had to be written many times, the owner of a diner in London Rami Abdurrahman, known for his engagement and “opposition”, runs the dubious “observatory”. Speaking of Syrian blood shed in March, which, according to the “observatory,” was the bloodiest month (although they have been called the bloodiest all the months), the “oppositionists” are silent about who was the cause of the bloodshed. Who blew up the mosque, killing 40 citizens, who bombarded the SANA building with a mortar, killing 4 people, who carried out a similar shelling of the dining room of the architecture department of the University of Damascus, killing 15 young people, the London "observatory" keeps silence. And he continues to place all the blame on the Syrian government, mixing up and eliminating the criminals, the dead soldiers of the Syrian army, and the dead civilians in one pile.

And now April begins - and the new month opens a new list of fallen at the hands of terrorists. The Observatory remains silent about them.
The terrorists and their information accomplices could not feel so comfortable and at ease, if not for the support from the NATO countries, which, considering themselves "civilized", do not hesitate to make a decision to send new and new weapon savage killers. Especially the government of neighboring Turkey, Syria, is trying, providing the rebels with money, weapons and their territory for training camps.

But in Turkey itself there are more and more sober voices that oppose such a policy of Prime Minister Recep Tayyip Erdogan.

In particular, one of the former ministers, who were once close to Erdogan, Oguzkhan Asiltyurk, accused the Turkish prime minister of fulfilling the will of the United States, provoking a conflict in Syria and more and more stirring bloodshed in this country.

According to the Turkish politician, Washington assigned Erdogan the task of implementing the “Greater Middle East” project, which the head of the Turkish government does. Asiltyurk called NATO a “killing machine” under the control of Zionism, and called on all countries in the region to put an end to interference in the internal affairs of Syria. He said that the policy of the Turkish government, which takes a position that does not meet the interests of the people of the country to stay in power with the support of the West, is only surprising, and also sharply criticized the fact that at the request of Erdogan, the NATO countries installed the Patriot missile systems on the territory of Turkey. According to him, this may have unpredictable consequences.

And one of the deputies of the Turkish parliament, a member of the opposition Republican People's Party, Ali Oz Gunduz, accused Erdogan of having been involved in the terrible terrorist attack in the Al-Iman Damascus mosque, in which Muhammad Said Ramadan Al-Buti, an eminent Arab religious leader, was killed along with by his disciples and by the people who came to that mosque on that fateful day. The deputy stressed that Al-Buti was for his anti-Western and anti-Zionist convictions. The late Sheikh repeatedly accused the United States and Israel of trying to carry out a coup in Syria with the complicity of Qatar and Saudi Arabia, killing innocent people. Ali Oz Gunduz in this regard, recalled that Erdogan has repeatedly appealed to Al-Buti with demands to stop supporting Syria and its leadership, leave the Motherland and move to Turkey. According to the deputy, the refusal of the Arab thinker to do this and caused his murder.

All this, combined with the plundering of enterprises in Syrian Aleppo and the export of their equipment to Turkey, pulls on an international investigation and on bringing Erdogan to the International Criminal Court. And with him - and all accomplices of terrorism in Syria.

The militants spread another video on the network, claiming that Syrian President Bashar Al-Assad was killed (once again!) And called on all Syrian soldiers and supporters of the head of state to surrender for three days, otherwise, as they said no mercy for anyone. "
However, the Syrian President gave an interview to two Turkish publications at once, in order to open the eyes of the people of neighboring Turkey to what is happening in Syria.

The interview will be published in the Turkish press in the coming days.