Patriotic rocket artillery recently celebrated a kind of anniversary: ​​50 years ago - March 28 1963, by a joint Resolution of the Central Committee of the CPSU and the USSR Council of Ministers No. 372 / 130, the salvo multiple launch rocket system (RSZO) BM-21 Grad was adopted by the Soviet Army.

The highest technological level of this RSZO and its heirs for a long time brought the Soviet Union, already a trendsetter in the field of rocket artillery since the creation of the legendary Katyusha, in indisputable leaders. Russia still remains one of the leading players in this segment of the international arms market. However, the process of re-equipping the Russian army with modern powerful MLRS “Tornado”, which started quite slowly, began a couple of years ago and finally stalled. The position of the Ministry of Defense of the Russian Federation in relation to the latest rocket artillery systems is still somewhat slurred.

The main advantages of the MLRS are the surprise attack, high fire destruction density over large areas, fast shooting of ammunition, high mobility (exit from the retaliatory strike - a few minutes), small size, compliance with the criterion of “ease of management - efficiency”, ability to work at any time days and in any weather, relatively low cost. The main disadvantages of the MLRS are a significant dispersion of projectiles, unmasking (high clouds of smoke, dust and flames) shooting, low mass of the missile warhead, limited possibility of fire maneuver at short firing ranges. The main trends in the development of modern multiple-launch rocket systems remain developments in the field of increasing the caliber of ammunition, expanding the range of tasks, increasing the rate of reloading, range and accuracy of fire. The latter trend in the West has been proclaimed one of the main criteria for the development of the MLRS, since it is believed to lead to a reduction in the "attendant losses" among the civilian population.

In many European countries, there is generally a tendency to define rocket artillery systems as weapons mass destruction. As far back as 1980, the UN adopted the Convention on Certain Conventional Weapons, prohibiting or restricting the use of weapons that can be considered to cause excessive damage or have indiscriminate effects. Of course, the MLRS can also be attributed to this type of weapon. Based on this, in the Armed Forces of Denmark and the Netherlands, for example, these systems have recently been decommissioned.

At the same time, the MLRS, taking into account all of the above combat characteristics, remain one of the most popular types of weapons in most armies in the world. Demand for them increased even more after the civil war in Libya, where regular army units and units of Muammar Gaddafi's supporters, thanks largely to Soviet-made MLRS, successfully resisted more numerous rebel units supported by the military aviation NATO.

From Katyusha to Tornado

From the moment 16 July 1941, the battery of 132-mm BM-13-16 (Katyusha) rocket units under the command of Captain Ivan Flerov defeated the Orsha railway junction together with the German echelons with troops and equipment, the era of Soviet jet artillery began. About a year later, the Katyusha 300-mm BM-31-12 ("Andryusha") modification of the Guard rocket of the Katyusha had already entered the battle with cellular guides.

With the end of the Great Patriotic War, the Soviet army received a whole range of field rocket artillery systems - 240-mm BM-24, 140-mm BM-14, 200-mm BMD-20 "Storm-1", towed by 140-mm RPS-XNMX . These very old, but reliable installations are still in service with some armies in the world. But they differ little from the Katyusha - field MLRS. Their maximum firing range does not exceed ten kilometers (exception BMD-14 - 20 km). 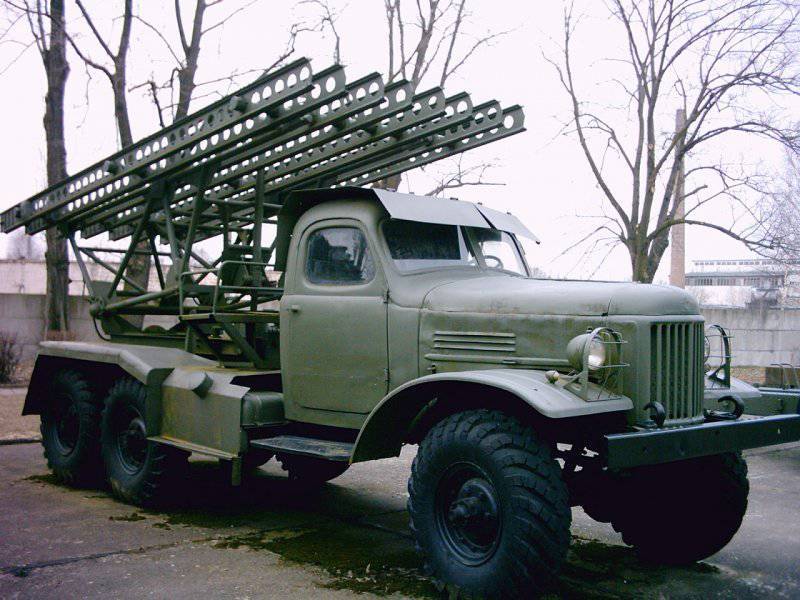 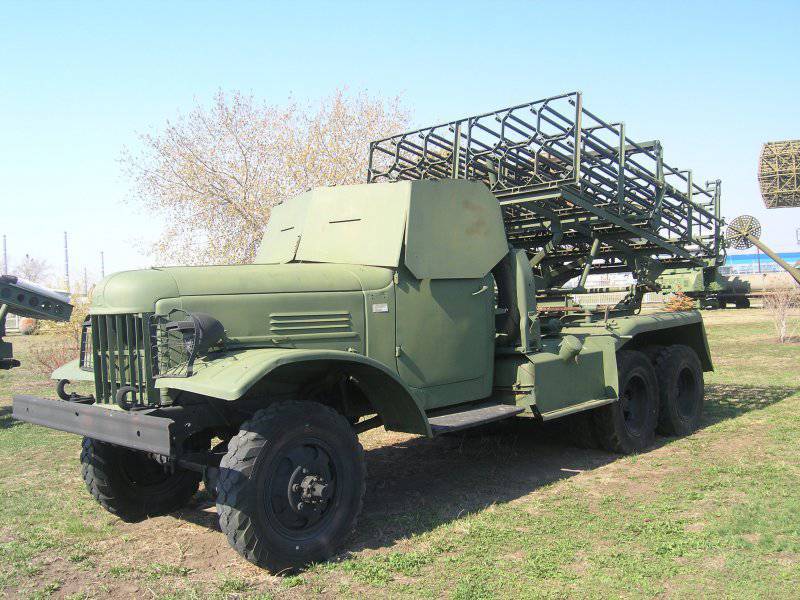 The turning point came in 1963 with the advent of 122-mm BM-21 Grad (developed by Tula Research Institute-147, now SNNP SPLAV) with a maximum firing range of 20,4 kilometer, which was upgraded to 40 as a result of upgrades. On the basis of the BM-21, a number of domestic MLRSs were created - Prima, landed Grad-V, Grad-VD, Grad-P (lightweight, portable), Grad-1, ship Grad-X M, coastal self-propelled bomb dam complex "Dam". Excellent technical characteristics of the machine and its gigantic modernization potential have become the reason for its copying and innumerable improvements throughout the world.

In 1976, the Soviet Army received the more powerful 220-mm “Uragan” volley fire system (developed by NPO SPLAV) with a maximum range of 35 kilometers. The number of guides - 16 (for Grad - 40). The final chord of the Soviet era was the appearance of the 300-mm MLRS "Smerch" of the same developer, for a long time remained the most long-range rocket artillery. The maximum firing range is 90 kilometers, the number of guides is from four to 12. The missile is corrected in flight by the gas-dynamic rudders, dispersion - 0,21 percent of the firing range. A salvo of one combat vehicle covers an area of ​​672 thousands of square meters. The loading system is fully mechanized. Used disposable transport and launch containers (TPK). MLRS "Smerch" was adopted in 1987-m, although its development began in the 60-s.

The State Scientific-Production Enterprise (now OJSC) “SPLAV” began the modernization of “Grada” at the beginning of the 90-s. The result of these works was the appearance of the MLRS "Tornado-G", the adoption history of which resembles the television series "Deceived Hope." Since December, 2011 has been announced several times about the transfer of Tornado-G to 36 troops (production - Motovilikha plants), then this information has been consistently refuted. In February, 2012 of the year, former Defense Minister Anatoly Serdyukov said that these machines (worth 1,16 billion rubles) were not included in the state defense order, but he promised to consider the possibility of restoring this order in case of successful completion of the system state tests. 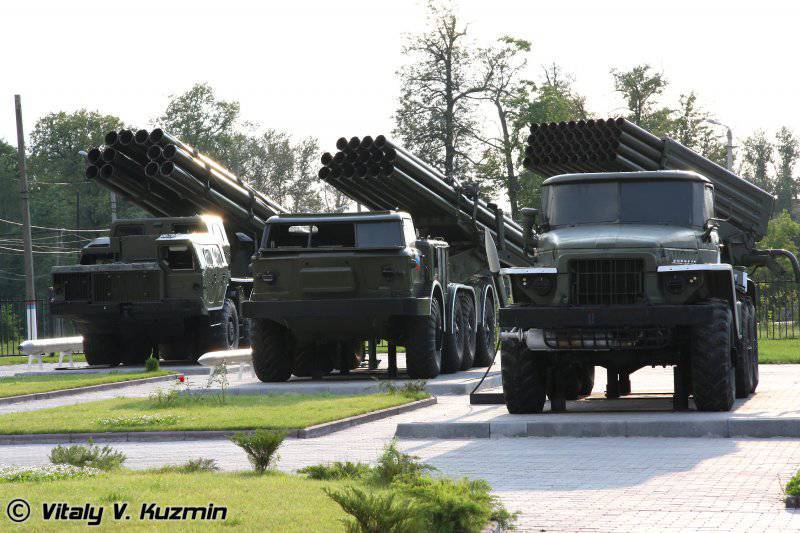 In September 2012, the Ministry of Defense and OJSC Motovilikhinskiye Zavody finally signed an agreement on all the same 36 machines, but the promotion of the contract again stalled. As a result, according to official data, in the Armed Forces of the Russian Federation at the moment there are only 30 "Tornado-G".

As Nikolai Bukhvalov, director general of the Motovilikhin plants, recently stated in the press, the situation was incomprehensible, the MLRS Tornado-G is ready for mass production, but the military department does not accept it. The reason is that, in the opinion of the manufacturers, the military are making an 122-mm system with excessive demands on the firing range. The maximum range remained "Grad" - 40 kilometers. Differences "Tornado-G" from "Grad" - reduced crew (from three to two people), reduced deployment time to the position, the fire is without topographic and geodetic training. Semi-automatic guidance package guides without leaving the crew from the cockpit. New high-power ammunition - cluster projectiles with detachable warhead and self-targeting cumulative combat elements.

The new MLRS Tornado-S, which is replacing Smerchu, has been modernized in the guidance and aiming automation segments, increasing the range of missiles (RS) to 120 kilometers, increasing the accuracy of shooting due to the inertial guidance system and the GLONASS system. Availability is reduced by 2,5 times compared to the base system. 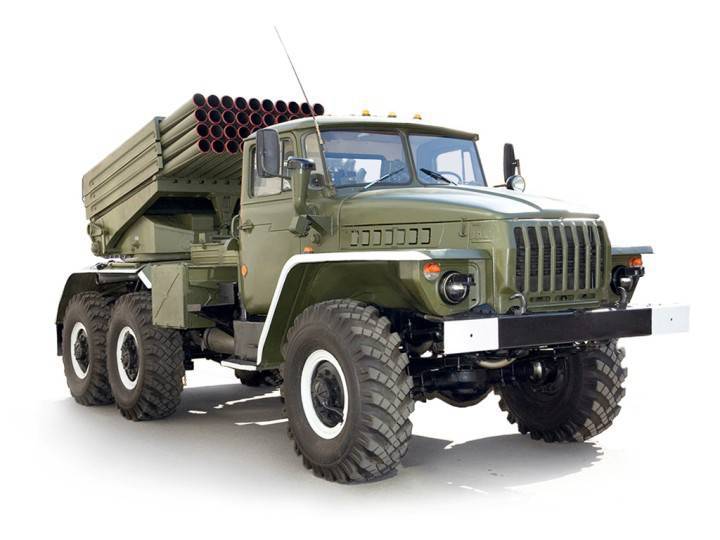 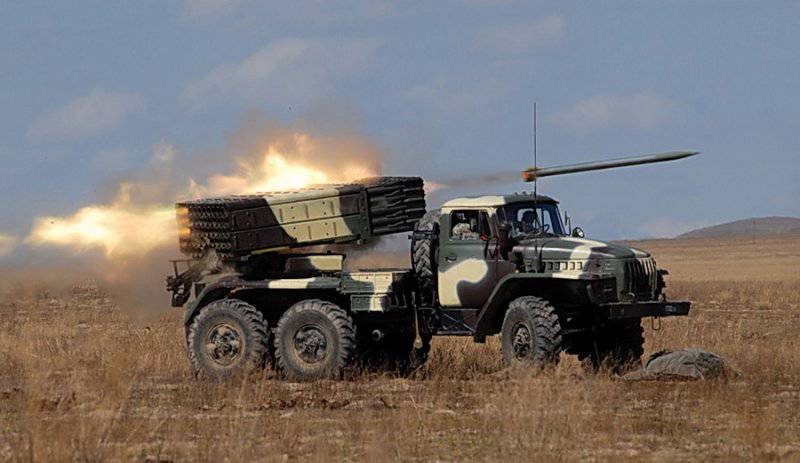 Modular bikaliber (TPK with 2x15 - 220-mm RS or 2x6 - 300-mm RS) system "Uragan-1M" is a fundamentally new MLRS with a range of 80 kilometers. Lieutenant-General Sergei Bogatinov, the chief of the missile forces and artillery of the Ground Forces in 2009 – 2010, noted that the Uragan-1М batch loading will allow the use of the entire set of standard and developed Uragan and Smerch rocket launchers. The range of missile warheads is broadly cumulative, high-explosive, anti-tank and anti-personnel mines. However, so far there have been no statements either from the developers or the military that the new MLRS will become universal in the future and, in addition to the missiles, they will fire tactical missiles (OTR). In any case, the previous leadership of the Ministry of Defense did not set such a task for the developers.

The concept of firing RS and OTR implemented in American and Israeli rocket artillery systems. It is possible that in the Russian army in order to expand the range of combat missions to be solved in the future, the new MLRS will work together with the Iskander tactical missile systems.

From the American launchers of the MLRS M270 MLRS (on a tracked base, the start of operation - 1983 year) and HIMARS (on a wheeled chassis, in the troops - from 2005 year), the company Lockheed Martin Missile and Fire Control launches 240-mm missiles and tactical solid-fuel missiles ATACMS family with inertial guidance system and a firing range from 140 to 300 kilometers, depending on the modification. 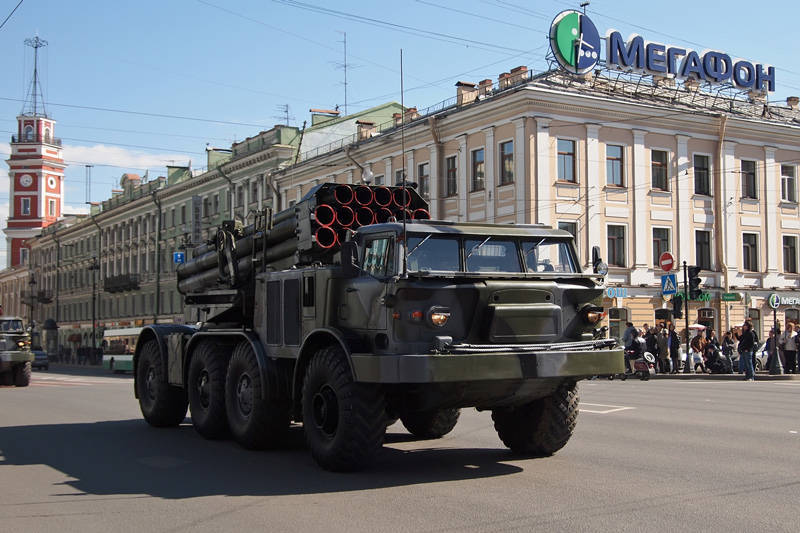 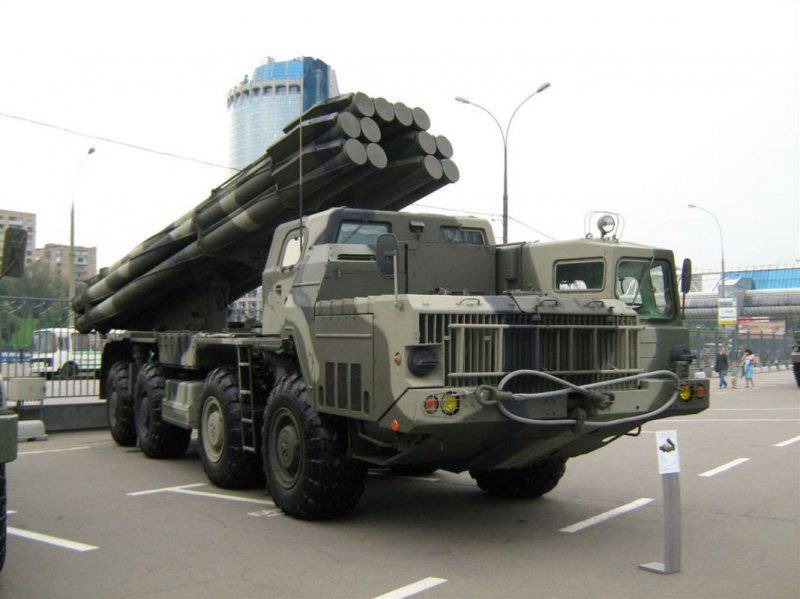 The standard PC firing range is 40 kilometers, but for controlled PCs (inertial system and GPS) it is increased from 70 to 120 kilometers. There are no permanent guides in the systems, shooting comes from disposable containers (М270 - 12 missiles, HIMARS - six). M270 MLRS - the most massive MLRS in the armies of NATO and other US allies.

The principles of such compatibility were also implemented in the Kazakh MLRS "Naiza" (a joint development of IMI and JSC "Petropavlovsk Heavy Engineering Plant"). However, during the tests, it turned out that the Israeli RS "Naiza" ("Lance") was not able to fire; in addition, many other design flaws were revealed. The case ended with one of the loudest weapon scandals.

In 1983, the Brazilian army adopted Avibras developed by the Astros-II MLRS, which fires five types of missiles (caliber - from 127 to 300 mm) to a maximum range of 90 kilometers.

The German 110-mm LARS-2 rocket artillery systems (36 rockets, maximum firing range - 25 km) were produced from 1980 to 1983 year, 200 vehicles were produced in total. At the moment, the Bundeswehr completely removed them from service, replacing the MLRS MARS - the American MLRS with German modifications.

Italy, in exchange for the MLRS, also got rid of its own MLRS FIROS 25 / 30 (caliber 70 and 122 mm, firing range - 34 km) developed by BPD Difesa e Spazio Spa. The Spanish Ministry of Defense in 2011 decided to do the same with the Teruel-140 rocket artillery system developed by the Spanish company Santa Barbara (now part of General Dynamics European Land Systems) with a firing range of up to 3 kilometers.

Japanese self-defense forces entered this “club”, replacing all of their Type 130 75 systems (defeat range - 15 km) developed by Nissan Motor in the middle of the 70s on the M270 MLRS.

At the moment, the owner of the most powerful MLRS in the world is China. 2004-mm WS-425D (six guides), developed by Sichuan Aerospace Industries, beats 2 kilometers. This, by the way, is enough to cover the coast of Taiwan. The firing range of its base WS-200 302-mm platform is up to 1 kilometers. The 180-mm PHL-300 system (03 guides, firing range - 12 km) developed by Norinco Corporation is an almost complete copy of the Soviet Smerch. Copied from "Tornado" and MLRS A-130 with a range of up to 100 kilometers. The main MLRS of the People’s Liberation Army of China remains the 50-mm Type 122 (a copy of the Soviet Grad). This system and its modifications (on the track and wheel base) are actively being promoted by China on the international arms market. All in all, the PLA is armed with up to a dozen different proprietary rocket artillery systems.

Ctrl Enter
Noticed oshЫbku Highlight text and press. Ctrl + Enter
We are
The award system of the Soviet ArmyRussian artillery, how it all began
18 comments
Information
Dear reader, to leave comments on the publication, you must to register.