Ukraine, it's time to decide 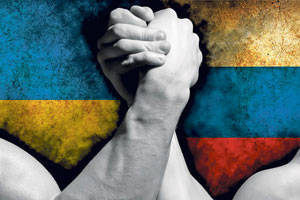 Moscow and Kiev cannot establish long-term military-technical cooperation due to constant political turbulence on the Square.


It is no secret that military-technical cooperation between Russia and Ukraine is developing with great creak, and even frankly stalled. Moreover, many projects simply fly derailed. This is largely due to the answer to the questions of what Ukraine is today and whether the agreements concluded today will be reliable in the foreseeable future. It is for these reasons that Russia goes to significant costs associated with the creation of the production of a number of weapons and components for weapons and military equipment on its own territory. Our nearest neighbor is constantly reeling, then Ukraine is in NATO, not in NATO, now in the Customs Union, now out of the Customs Union. In other words, the geopolitical future of Ukraine as a state and the vectors of its development are clearly foggy. There is still no clear answer to the question: Ukraine is what? To this must be added the exorbitant Ukrainian ambitions in a number of joint projects. In particular, in the field of aviation industry, Kiev during the recent negotiations claimed 50 percent. Otherwise, as beyond the scope of common sense, such a position cannot be called. But the Ukrainians did not make reasonable concessions. In this material, the weekly MIC presents a point of view based on the theses and statements of a security expert from the Dnipropetrovsk branch of the National Institute for Strategic Studies Alexei Izhak.

The current state of relations in the military-technical sphere between Russia and Ukraine is characterized by a significant interweaving of cooperation and competition in various areas, which is primarily due to a single scientific and technical base that was laid down in the Soviet period. stories two states.

To identify key points of contact in armory Russian and Ukrainian policies need to identify patterns of Russian-Ukrainian relations in the production and sale of weapons. Experts from the Ukrainian side note the presence of several similar models.

The first is related exports, most manifested as part of Russian supplies to India and China. Export aviation equipment and warships is accompanied by orders for Ukrainian manufacturers of aircraft missiles and ship engines. Currently, such a symbiosis is most pronounced in the export deliveries of Russian helicopters of all models, for which Ukraine is the monopoly engine manufacturer.

The second model is supplies from arsenals: old, repaired, modernized Soviet weapon systems. These include small arms, armored vehicles, artillery, air defense and front-line aviation. Recipients are mainly African countries. There is competition in this trade sector. However, it is softened by the fact that Ukraine and Russia are in different weight categories.

The third model is post-Soviet development. Ukraine has a strong position in armored vehicles, wide-body aircraft, rocket armament, boats. The monopoly on ship power plants and helicopter engines is preserved. But in most areas, Russia and Ukraine occupy different niches in the market and do not compete, rather complement each other. An obvious conflict occurs only in the field of armored vehicles - the Ukrainian T-84 tank against the Russian T-90, the Ukrainian BTR-3 and the BTR-4 against the Russian BTR-82.

The fourth model - the supply of arms to China. In recent years, Beijing has abandoned large-scale purchases in Russia in favor of creating its own military products based on Soviet and Russian armaments. At the same time, interest remains in some key technologies that are still not reproduced by the Chinese side due to the apparent lag in the scientific and technological base. China is inclined to buy small batches of high-tech products. Such contracts are not interesting for Russia, but attractive for Ukraine.

In general, with regard to the current state of Russian-Ukrainian relations in the field of military-technical cooperation, there is a complex picture, where the partnership is intertwined with competition. This fact, of course, must be taken into account when analyzing the possibilities of expanding bilateral relations within the framework of the PTS, which are most realizable in the following promising areas.

First of all, we are talking about shipbuilding and helicopter industry. This area includes orders for the supply of Ukrainian enterprises of Russian power plants for ships of various classes, as well as the prospect of concluding agreements on the inclusion of the largest Ukrainian shipyards in the repair process and subsequent modernization of ships fleet Of Russia. The most striking example is the ongoing negotiations between the Ministry of Industry and Trade of the Russian Federation and the Black Sea Shipbuilding Plant in Nikolaev. Within the helicopter industry, as in the case of shipbuilding, a significant part of the engines for most Russian helicopters is purchased at Ukrainian plants. In 2011, Motor Sich and Russian Helicopters signed a $ 1,2 billion contract for the supply of engines during 2012-2016. This is the most extensive of the existing contracts of Motor Sich JSC, which accounts for about 25 percent of the annual production of the Ukrainian enterprise.

Do not forget about such a promising course as the aviation industry. In this direction, as is the case with the production of helicopters and shipbuilding, the overall technological base allows Ukraine to be integrated into the arms contracts of Russia. In the field of aviation there is the prospect of a joint production of An-70 and, possibly, military variants of An-148. But so far the economic component of these projects in the total mass of the PTS is negligible.

A separate area that deserves special attention is the rocket and space industry. Today, Ukraine’s participation not only in extending the service life of Russian ICBMs of Soviet construction remains. In the area of ​​rocket production, projects related to MTC include the production by the Ukrainian side of Dnepr conversion ballistic missiles used for space launches, and joint participation with Russia in the Maritime Launch international project. The difficulties that arose in the 2012 year with Dnipro following the demands of the Russians to revise the financial parameters, and at the beginning of 2013 with Zenit, suggesting the likelihood of the Sea Launch to be preserved after an emergency launch, are of a “commercial-political” nature.

We should also mention the possibility of using the existing Ukrainian Zenit and Cyclone missiles and their future modifications to remove Russian military satellites from the “paramilitary” global positioning system GLONASS. On the last point, cooperation can develop in two more important directions. These include the production of electronics for GLONASS receivers and the deployment of a ground correction system, without which GLONASS would not be commercially successful.

Russia and Kazakhstan are in difficult negotiations regarding the launch regime with Baikonur, and the prospects for using Ukrainian missiles depend on their success.

Obstacles in the PTS sphere

And yet, on the way to the implementation of even a small part of the listed areas of Russian-Ukrainian cooperation within the framework of the MTC, serious barriers arise, which often have a frankly political basis. The main obstacle is the lack of mutual guarantees of non-use of interdependence in the sphere of military-technical cooperation in the interests of third countries. Ukraine’s monopolistic production of a whole range of defense products in the framework of military-technical cooperation with Russia creates in many respects illusory fears for the Russian side for serious risks associated with the continued possibility of concluding bilateral agreements between Ukraine and NATO or the EU. That is why Russia is steadily following the path of import substitution of Ukrainian components.

In practice, in the modern world, production programs in the field of armaments and military equipment are becoming increasingly global and less and less dependent on military-political obligations. The most striking example is the contract for the purchase of Mistral, in which even in the case of production at Russian shipyards the control system will be installed exclusively by the French side. Among other things, the holding company "Helicopters of Russia", compensating for the reduction in the volume of deliveries of Ukrainian engines for Russian enterprises, concludes agreements with Canadian manufacturers. It is difficult to call these supplies more reliable than agreements with Ukraine, since the project was hindered by the war in North Ossetia and Abkhazia, but the fact is obvious. Russia is buying from NATO countries and simpler technologies - electronics, armor, simulators.

In addition, experts note that between Ukraine and Russia there is no agreed understanding of the permissible level of interdependence. For example, for the development of existing directions of Russian-Ukrainian cooperation within the framework of the military-technical cooperation, Moscow wants serious guarantees from Kiev in the form of an uncompromising consent to membership in the Customs Union, which will entail long-term economic and political consequences. At the same time regarding cooperation with France and Germany, guarantees for Russia are the benefits of cooperation itself without any membership in the Customs Union.

Yes, the concerns of both sides have grounds, but there is a lot of contrived. Ukraine should understand that no country in the world buys weapons and military equipment just because they are better for cost-effectiveness reasons, and Russia is no exception. If the product is created jointly, then the obligations should be joint. Russia will never agree to monopoly dependence and will get rid of it.

For its part, Russia needs to understand that the “Russian world” does not replace investments. The Ukrainian defense industry will survive without the Customs Union. The Russian market for Ukraine for the same helicopter engines is only a quarter of the production. A break in cooperation with Russia would be extremely painful, but not fatal.

Most experts agree that there is no universal solution here, but there is hope - a tense dialogue between the two countries in recent years will provide a better understanding of mutual interests and allow developing joint projects in areas where the benefits are felt by both parties.