April 3 2013
7
Republic Aviation has begun work on creating a new F-84 jet fighter in 1944. The works were led by aircraft designer Alexander Kartveli. It is worth noting that this famous American aircraft designer of Georgian origin had a hand in the creation of such famous aircraft as the P-47 Thunderbolt and F-84 Thunderjet fighters, as well as the A-10 attack aircraft. Kartveli developed a new aircraft in accordance with the requirements of the Air Force to the long-range escort fighter. The new F-84 was supposed to change the well-proven P-47 in the army, which at that time was still at the zenith of its glory, but in the coming 1-2 of the year would inevitably become obsolete due to the appearance of new jet aircraft of rivals.


The first draft of a new jet fighter assumed an elementary rework of the design of a successful P-47 Thunderbolt piston fighter for the use of a turbojet engine (TRD) with the location of the power plant in the bottom of the fuselage. However, during the work on this scheme, the designers of the fighter were faced with a large number of problems that were associated with the placement of the engine. As a result, in October 1944, Alexander Kartveli threw fruitless attempts to rework the old fighter and began to design a completely new car.

During the design of the new fighter, great attention was paid to reducing its aerodynamic drag - the main characteristic for the long-range escort fighter. As a result, the aircraft was designed with an elegant slim fuselage, having a large elongation. The engine was located behind the cockpit in the middle part of the fuselage and was powered by air from a circular front air intake, the channel of which went under the floor of the cockpit. Within the framework of such a layout of the fighter, the entire useful volume of the fuselage was filled and there was almost no space for the placement of fuel tanks. Therefore, the main fuel supply was located in the wing, the relative thickness of the profile of which was 12% (for most aircraft of those years, this figure did not exceed 11%). 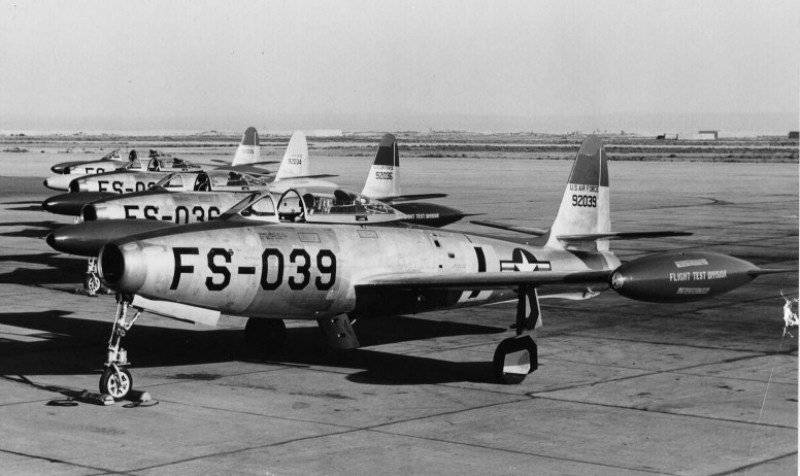 11 November 1944, the Air Force Command officially approved the new project and ordered the 3 fighter prototype. The first of these, under the designation XF-84, was already ready in December 1945. In February, the 1946 of the year saw the official presentation of the fighter, representatives of the Air Force appreciated the capabilities of the new aircraft by ordering the 25 pre-production samples of the YP-84A and 75 serial P-84A fighters. Later, the number of production aircraft was increased by 10 units by reducing the number of pre-production units. At the end of 1946, the new fighter was officially named Thunderjet.

On the last February day of the 1946 of the year, the F-84 Thunderjet first took to the air, flying a test pilot Major W. Lane. To accelerate the tests conducted in August 1946, the second YP-84 fighter arrived in Murok. Both aircraft were fitted with General Electric TRX J35-GE-7 with a maximum thrust of 1700 kgf. The flight tests performed demonstrated very good handling characteristics and machine stability.

As a result, the aircraft was put into service, although with a number of reservations. So the military asked to increase the range of the machine and replace the M2 machine guns with more rapid-fire samples. In an effort to launch serial production of the fighter as soon as possible, the flight range was brought to 1370 km. by installing two additional fuel tanks with a capacity of 870,5 l. at the ends of the wing. At the same time, flight tests of a fighter with such tanks were carried out purely formally, without proper verification of their influence on the fighter’s handling and stability, which subsequently caused numerous disasters and accidents. If we talk about the 12,7-mm machine gun M2, then they were replaced on the serial machines for faster-speed M3 (1200 rds / min). Completion of improvements on the aircraft was the installation of a more advanced engine J35-A-15. The first production fighters received the official F-84B index. 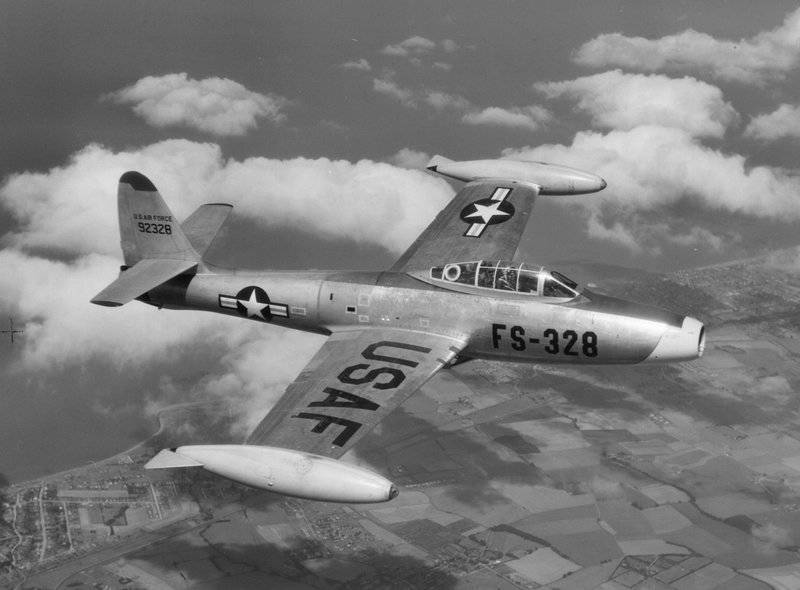 Description of construction and modifications

The fuselage of the fighter had a circular section and consisted of 3-x parts: the nose, middle and tail. In the nose part there was an air intake, electronic equipment units (A-1В radar sight and radio station), a nose landing gear. In the middle part there was a pilot's cabin, 3 fuel tank and wing attachments. Fuel was fed to the engine using booster pumps. On the lower surface of the middle part of the fuselage was a perforated brake flap, which was controlled by 2 hydraulic cylinders. The maximum deflection angle of the shield was 55 degrees.

The cockpit was sealed and equipped with an ejection seat; air was used to heat it, which was taken from the engine compressor. The cockpit lantern was movable and had a teardrop shape. Starting with the F-84E version, the length of the flashlight has been increased in accordance with the new standards of the Air Force. The tail assembly was attached to the rear fuselage, removable suspension assemblies for launching rocket boosters were located in the lower part.

The design of the fighter wing was two-spar. The wing was attached to the fuselage with bolts. The wing mechanization included ailerons and slotted flaps. When released, the flaps are moved back and deflected downward by 40 degrees. The ailerons of the wing had a booster independent control system. The trimmer was controlled by a lever that was mounted on the fighter control stick. 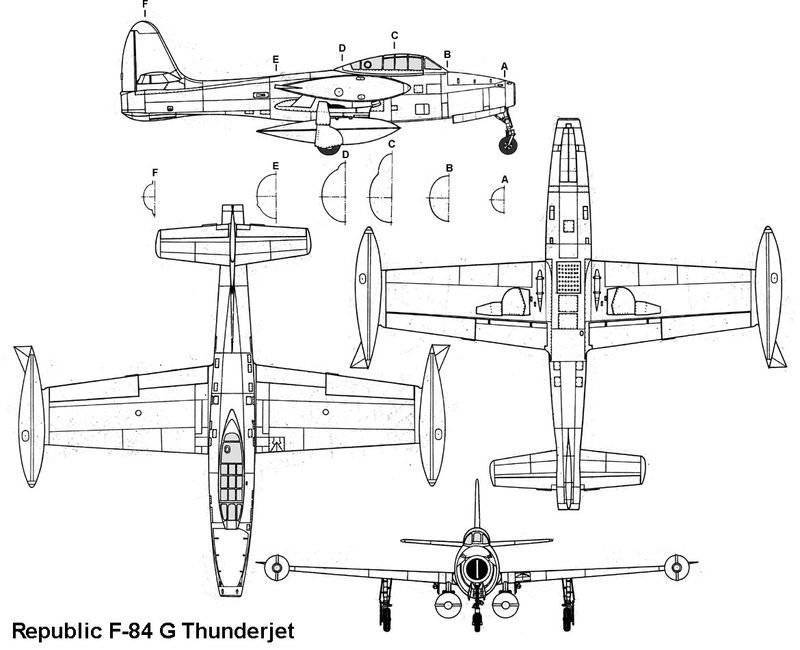 The internal volume of the wing of the aircraft occupied the fuel tank, which was divided into 5 compartments. In this case, at the ends of the wing could be installed additional tanks. Performing aerobatics in the presence of full end fuel tanks was strictly prohibited.
The landing gear is classic tricycle. The main racks are retracted in the wing while they are shortened, as on the P-47 Thunderbolt. On airplanes in versions C and D, the landing gear shortening system was hydraulic, on the other versions it was mechanical. The front landing gear was uncontrollable, turning during taxiing was performed by braking the respective main wheels.

Deliveries of the aircraft to the troops began in the summer of 1947. The first long-range fighters entered service with the 14 th fighter group, in total 226 fighters were delivered in the F-84B version. Behind them in the number of 191 aircraft was released version F-84C, which was basically similar to the previous model, but had modified bomb mechanisms and advanced electron equipment. The next model, the F-84D, was also not massive enough, a total of 151 aircraft was released. This model was distinguished by a modified fuel system and a reinforced wing structure.

In May, the next version of the F-1949E fighter jet 84, which received in addition to the 6x12,7-mm machine guns the ability to carry up to 32 missiles or 2x454-kg bomb. According to the idea of ​​Alexander Kartveli, the F-84E fighter was supposed to be the last modification of the Thunderjet, but in fact it turned out differently. At the very beginning of the 50 of the last century, a small tactical nuclear munition entered the US Air Force. At that time, the military did not have a suitable tactical carrier, and they turned their attention to the long-range F-84E fighter, which it was decided to convert into a small nuclear bomber. 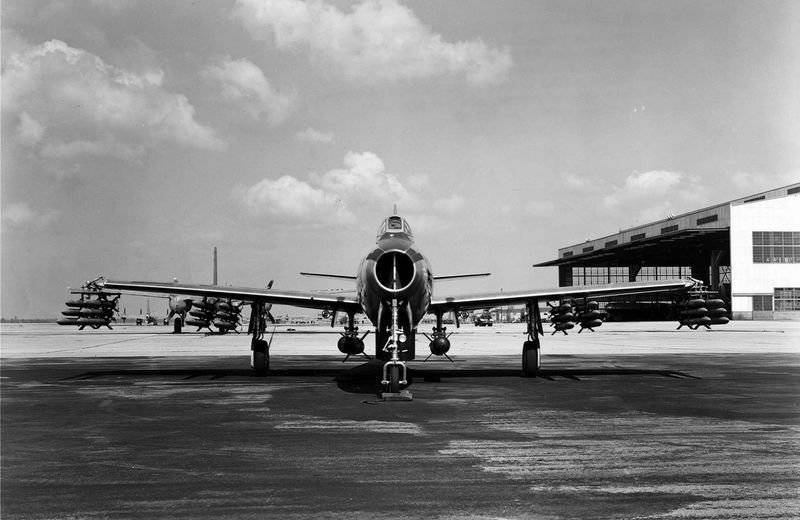 The new modification of the aircraft received the designation F-84G and became the most popular aircraft in the F-84 family with a straight wing - X-NUMX aircraft were released. The F-3025G fighter was the first American fighter to get the ability to carry nuclear weapon. The first production vehicles entered service with the Air Force in August 1951 of the year, and in the winter of 1952, some fighters were transferred to Korea to conduct combat tests of the aircraft. The F-84G fighter-bomber was equipped with an autopilot and airborne refueling equipment. In 1954, the F-84G performed a record-breaking non-stop flight across the Atlantic Ocean for single-seat jet fighters. Due to the use of more spacious outboard fuel tanks and a new J35-A-29 engine with a 2540 kgf brigade, the maximum fighter range reached 3240 km. The serial release of the latest modification of the F-84 was halted in July of the 1953 year.

By 1956 Strategic Aviation US command decided to completely abandon the use of the F-84G fighter, while the tactical command for some time kept these vehicles in service. At the same time, from more than 3 thousand fighter aircraft produced, 1936 were delivered to NATO countries. These aircraft for a long time provided an effective confrontation with the forces of the Warsaw Pact in Central Europe. Also, these machines were in service with the Air Force of Yugoslavia (from 1953 to 1974).

The most widely used F-84 fighters were used during the Korean War, starting at the end of the 1950 year. This aircraft was significantly inferior to the Soviet fighter MiG-15, but it proved itself very well as a fighter-bomber. In 1952, version G fighters appeared in the skies of Korea. In the final months of the war, F-84G airplanes from the 58 and 49 fighter-bomber wings launched a series of blows to the North Korean irrigation dams, which were very important for the local economy. The first target of the fighter-bombers was the Toksan Dam, located on the Potong River, 20 km north of Pyongyang. A bombing of the dam was launched on 13 on May 1952 of the year, with 59 aircraft equipped with 454-kg bombs taking part in the raid. 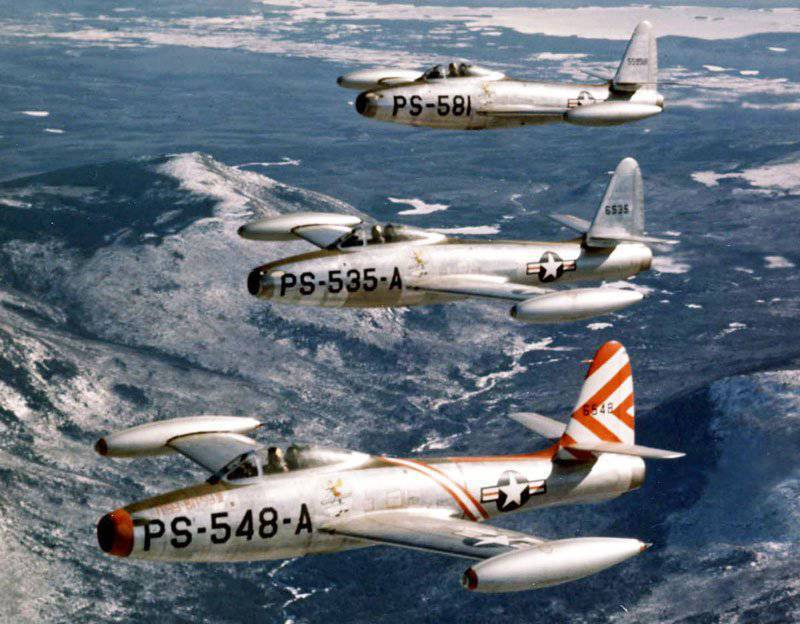 The first results of the air strike seemed disappointing to the American command. Despite the damage received, the dam could not be destroyed. But the pictures taken the next morning showed that the goal was achieved. During the night, under pressure from water, the dam damaged by the bombing collapsed, and the flood covered a vast area. Among other things, several kilometers of highways and railways were destroyed, connecting the north and south of the country, several settlements and the airfield. Only one air strike on the North Korean transport system did more damage and damage than the previous weeks of bombing. Encouraged by this success, the Americans repeated similar attacks, attacking the dams of Kouwong and Chasan.

It can be noted that the F-84 almost put the last point in the Korean War, when 27 July 1953, the fighters struck a series of strikes on airfields in northern Korea. According to official American data, during the entire period of operation of the F-84 in the USAF they destroyed 11 enemy aircraft, including 10 MiG-15, in air battles; all these victories were won as part of the Korean War 1950 — 1953 and only in 1951 .