The no longer secret Su-35: foreign press about Russian fighter

April 3 2013
83
The latest talk about the upcoming purchase by China of Russian Su-35 fighters attract the attention of the whole world. China claims to domination, at least in the region, and new generation fighter "4 ++" can significantly increase its military potential. So far, we are talking only about a few dozen aircraft, but we should not forget the contracts of the past years, when Chinese engineers carefully studied the purchased equipment and made their own on its basis. Thus, the purchased Su-35 may well become a kind of basis for hundreds of new fighters that will not yield to planes of other countries of Southeast Asia. 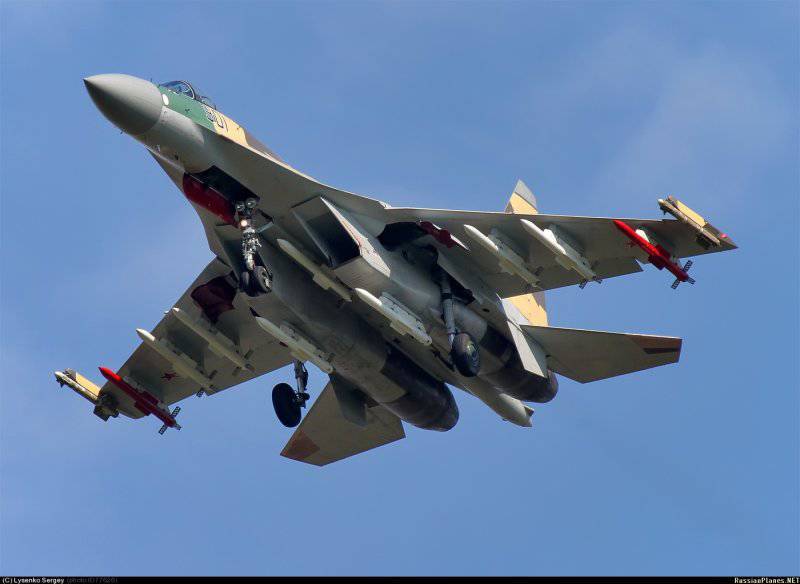 In connection with such a possible development of events, foreign experts and amateurs aviation show increased interest in the new Russian aircraft. A few days ago, the Defense Industry Daily (DID) wrote about the fighter. The article received the high-profile title Russian SU-35 Super-Flanker: Mystery Fighter No More (“Russian Su-35 Super-Flanker: No More Secret Fighter”). Although the authors of the publication, for obvious reasons, do not have complete information about the Su-35 fighter, it is nevertheless worth familiarizing themselves with their opinions and assessments of prospects.

First of all, DID is reminded of the recent confusion with designations, when the Su-35 index hid two combat vehicles at once, which had significant differences from each other. The first of them was a Su-27 with an updated composition of avionics and other engines, and the second was a deep modernization of the original fighter. In particular, the new machine, sometimes called the Su-37, received the front horizontal tail. However, recently the situation has become clear and under the name Su-35 only one fighter appears. The article mentions another confusion, this time with the manufacturers. It is noted that not all plants and corporations directly related to the construction of new aircraft placed them on the list of products on their official websites.

The current Su-35, which previously had additional letters “BM” in the designation, according to DID employees, is a kind of compromise between the two ideas of equipping the Air Force with a new technique. Su-35 is considered as something between a simple upgrade of serial machines and a new vision of the look of a modern heavy fighter. The result of this approach was the equipping of the H035 “Irbis” onboard radar with a passive phased antenna array, the use of the L175M “Khibiny-M” jamming system and the installation of equipment on the aircraft necessary to create so-called glass cabin. Regarding the design of the aircraft, DID notes the rejection of the use of the front horizontal tail, the new AL-37FU turbojet engines with variable thrust vectoring and substantial modifications of the wing, tail assembly and their mechanization. It is worth noting that the Su-35 fighters use the engines of the AL-41F1 family, and a certain "AL-37FU" may be a simple mistake. 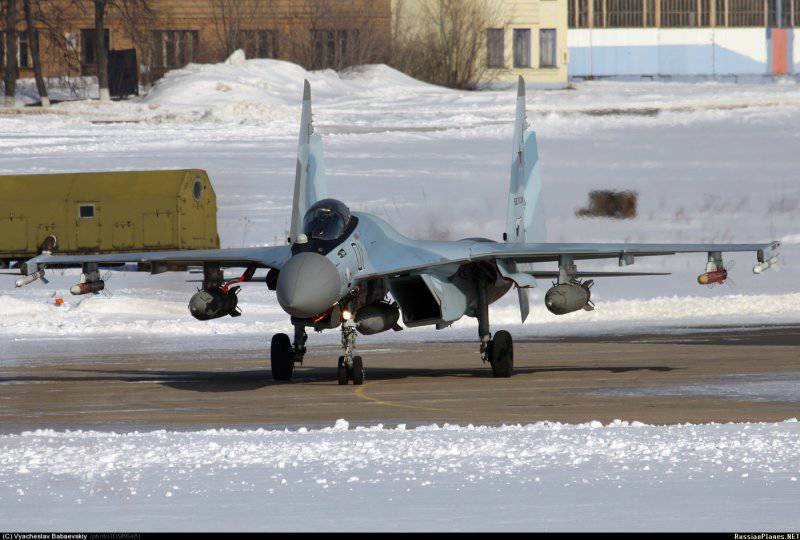 In the context of the new avionics, DID note the specific situation with the radar. Of course, the passive phased-array electrohydraulic driven array is capable of finding and attacking a large number of targets (30 and 8, respectively), but some questions remain. It is noted that the information on the maximum detection range of an air target in 400 kilometers is not accompanied by a corresponding disclaimer regarding the effective dispersion area (EPR) of the object found. Quite rightly, the article notes that finding a small fighter is much more difficult than finding a large passenger plane.

Commenting on the statements of the Sukhoi company about reducing the visibility of the aircraft, the DID staff remind that the Su-27 family of fighters never had a small EPR and therefore one should hardly expect much success in this area from the new Su-35. However, reduced visibility is not excluded, which may be facilitated by the use of special materials and the transfer / removal of protruding parts.

Finally, employees of Defense Industry Daily touched the resource of the new fighters. They do not call the declared figures real or impossible. In their opinion, only time can show whether the creators of the aircraft were right, talking about the glider's resource in the 6000 clock and the engine in the 4000.

An assessment of the prospects for the new Su-35 fighter begins with a small excursion into history. The authors recall that the Su-27 was created as a response to the fourth-generation American fighter F-15, F-16 and F-18, thanks to which the designers from the USSR were able to take into account all the possibilities and prospects of the aircraft of a potential enemy. As a result, the Su-27 turned out so successful that in a few years it became more successful in export terms than the MiG-29, previously offered for sale to third countries.

In just a few years, the Su-27 and its modifications could become the main competitor of American and foreign fighters in the international market. The fighters, created on the basis of Su-27, have won a certain market share and now they can be replaced by new Su-35. They will have to fight for new contracts with American and European fighters of the 4 and 4 + generations. In addition, competition is possible with the Chinese aircraft J-10 and J-11. Among other things, DIDs note that Russia's claims on China over the illegal copying of aircraft (J-11 is a copy of Su-27SK) are fully substantiated.

In general, employees of Defense Industry Daily are not inclined to overestimate the export prospects of Su-35 fighters. First, with all their advantages, these planes are inferior to the Chinese J-11B in one of the main parameters - the price. This may have an impact on the decision of potential buyers. The second reason for which DIDs do not see great prospects, concerns the saturation of the market. A large part of the countries that are potential buyers of new aircraft, has already acquired the required number of machines of older models. Their service life is not over yet, so for some time a number of Eastern European and Asian countries will not buy fighters, including the Su-35.

As a result, a specific situation develops: some states have already bought airplanes and no longer need them, while others have chosen not Russian equipment. The number of remaining countries is small, and the volume of possible contracts will force all aircraft manufacturers to invest a lot of strength and, possibly, money in promoting their products. More or less understandable situation, according to DID, is developing with Indonesia, Vietnam and some other countries of Southeast Asia. They are not inclined to buy American or Chinese military equipment, so Russian planes may prefer. However, now these states are paying under previous contracts. Moreover, their financial capabilities suggest that in the future we should not expect new large orders of new, more expensive aircraft.

The overall "sentence" on the export of the Su-35 fighter, in the opinion of the Defense Industry Daily, is generally positive. However, DID recognize that the new fighter of the Su-27 family will be sold with much greater difficulties than previous versions of the famous aircraft.

Only one comment can be added to the article of Defense Industry Daily. Currently, Su-35 fighters are being built only for the Russian air force (these aircraft have the letter “C” in the title). Before 2015, the Air Force will receive 48 fighter jets. Su-35 deliveries to China are just being discussed. Not so long ago, information appeared about signing a contract, but in the best case, new aircraft for the PLA Air Force will be assembled only in a few years. As for deliveries to third countries, it is too early to talk about them. Naturally, it is too early to assess the prospects for the Su-35 in the international market. However, if we take into account the current situation and possible ways of its development, the forecast of the DID publication looks quite understandable and logical. But still I want Russian aircraft manufacturers to earn not only on large orders for the Air Force of their country, but also on export contracts.

Ctrl Enter
Noticed oshЫbku Highlight text and press. Ctrl + Enter
We are
Planar receiving multichannel modules AFAR X-band based on LTCC ceramics-Made in RussiaAn-12 in Afghanistan
83 comments
Information
Dear reader, to leave comments on the publication, you must to register.