Got it ... What did the multi-vector nature of Ukraine lead to? 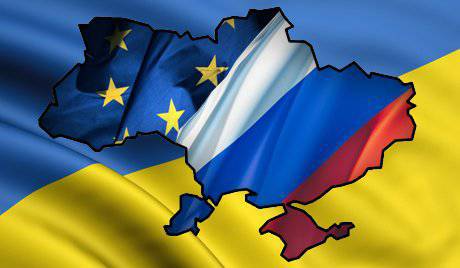 Despite the tremendous efforts that the Ukrainian government is spending to enlist the support of both the West and Russia, the country's uncertain position has already begun to annoy not only its neighbors, but also Brussels. And about this the Ukrainian authorities have already put before the fact those and others. At the same time, in words, Ukraine seems to have decided how long ago it was to make a choice: European integration is a priority in the state’s foreign policy.


Nevertheless, despite this, the signing of the Association Agreement with the European Union is still a big question. And the reason is not only the “lack of democracy and the imperfection of the judicial system,” but also Kiev’s desire to find an acceptable format of relations with the member countries of the Customs Union. All this in the end could not but lead to the fact that the country was practically in international diplomatic and political isolation. At least, this is what the report deals with, which was prepared by experts of the Center for System Analysis and Programming (Kiev). According to the authors of the report, something similar could be observed not only during the years of the presidency of V. Yushchenko, but after a year of being in power of V. Yanukovich. At the same time every year the situation becomes more and more complicated, and isolation becomes denser.

Both Russia and the EU no longer consider themselves bound by any diplomatic norms, so most official meetings with the Ukrainian authorities were more like a stern reprimand than a conversation of equal partners, the authors say. Rostislav Ischenko, the director of the Center, is convinced that such a deplorable state of perception of the Ukrainian state in the world was caused primarily by the wrong foreign policy course, which was conducted by the political leadership. Its essence was to make every effort and return to the implementation of the theory of multi-vector. But this is currently not possible. Recall that America considered the Ukrainian multi-vector approach unacceptable for itself at the beginning of a new century. It was then, Ischenko is sure, that measures were taken that led to a change of government (it is worth recalling the scandalously well-known films of Major Melnichenko, the case of journalist G. Gongadze, the Украина Ukraine without Kuchma ’action and the orange revolution that followed). After all these events, Russia also considered that the Ukrainian multi-vector approach could not be beneficial for it.

All this ultimately led to the fact that at present pressure on the Ukrainian government is being carried out from two sides. But the situation is complicated by the fact that the Ukrainian state will not last long without external cash injections. This is evidenced by the director of the Institute of CIS countries in Ukraine V. Kornilov. He is sure that a return to multi-vector policy is impossible, but for some reason this does not occur to those politicians who are pursuing the country's foreign policy. The expert also believes that Ukraine should refuse to integrate with the European Union as soon as possible, because the country's population doesn’t even imagine about the negative consequences for the country on the implementation of the Association agreement (if this comes to that). None of the Ukrainians in detail is not familiar with this document. Meanwhile, the analysts of the Institute analyzed it in detail, and came to the conclusion that this is a program of de-industrialization of the country. The implementation of the program, according to Kornilov, will lead to a humanitarian and social catastrophe. To avoid this, the Ukrainian government has only one way out - to integrate into the Customs Union. And the sooner this is done, the better for the state. Kiev doesn’t have much time, exactly as much as Moscow and Brussels can afford to wait for the change of power in Ukraine. At the same time, the expert notes that both the European Union and America are quite satisfied with this state of affairs, since they are confident that the next time, Russophobes will come to power in Ukraine. The positions of both Yanukovich himself and his party have become very weak lately, and no other political force of the same direction capable of replacing them exists. At the same time, the uncertain position of the Ukrainian authorities is also to the advantage of Russia, because the longer Kiev will refuse to join the Customs Union, the more it will destroy the country's economy. Thus, the political force, which has replaced the current government, will get an inefficient state that is practically on the verge of bankruptcy. Therefore, in the future, Ukraine will not have much choice: either to join the Customs Union, or to plunge into civil war. Moreover, according to Konovalov, after such upheavals, Ukraine simply will not be able to recover as an independent state, so it may well become part of Russia. In addition, the choice in favor of the Eurasian Union can help Viktor Yanukovych to remain in power after the new presidential election of the 2015 of the year.

Some experts go even further in their predictions. They say that, in the end, Russia and the West may well come to the conclusion that Ukraine only hinders the development of their relations, which will further aggravate its isolation. Therefore, it is not at all clear what motives lead them in constant maneuvering between the benefit from the EU and no less benefit from Russia. One thing is clear: none of these motives bears any real benefit either to the political leadership or to the country as a whole.

On the one hand, it is completely obvious that the Ukrainian leadership is trying to prove that it can create problems for its northern neighbor, but at the same time it does not think that achieving such goals is possible only by creating problems for the West. On the other hand, the Ukrainian authorities have already shown that the problem of gas supplies to Europe depends not only on Russia, but also on Ukraine, obviously trying to prove by this that Europe has to reckon with Ukraine to the same extent as it does with Russia. But in practice, Kiev proved only that Ukraine as an independent state is for Europe an extra link in the chain of providing it with blue fuel, another problem.

Thus, the behavior of Ukraine in the international arena, on the one hand, became a kind of catalyst for political elites in search of alternative gas supply routes. On the other hand, these same political elites are beginning to suggest that instead of an independent Ukraine as a buffer between the EU and Russia, it would be better to have common borders ...

At first glance it may seem that there are no special problems with this - you just need to include Ukraine in the EU. But in reality, the European Parliament is not very keen to do this, because such a decision is not a way out. Rather, it is the emergence of a new problem, due to the inconsistency and inadequacy of the Ukrainian political elite. Generally speaking, the behavior of the Ukrainian authorities was perceived by the West as normal as long as he was confident that Kiev would create problems exclusively for Russia. When it turned out that the Ukrainian authorities did not intend to dwell on this, and threatened European comfort (which had become a common regional idea), their attitude towards them changed dramatically.

Therefore, it is possible that in the near future many will begin to wonder: why is an independent Ukraine needed? And then it remains either to create a capable leadership in the country that will know exactly what is best for the state, or joint international control will be established over the Ukrainian state, or the control of certain countries over some historical Ukrainian regions ...

Against the background of the above, the Ukrainian authorities have one way out - to go for integration with Moscow, especially since the majority of the population supports such a course of the country. And it seems to be a matter of getting off the ground. At least, the Ukrainian Prime Minister N. Azarov told 19 in March of this year that the Ukrainian government is negotiating, the purpose of which is to obtain observer status in the Eurasian Union. In addition, the press reported that the working groups of the two countries agreed on the associate membership of Ukraine in the Customs Union. However, D. Medvedev to some extent refuted this information, stating that the Ukrainian representatives like to talk about joining the “three plus one” very much. But in practice, nothing of the kind can happen: observation means observation, full membership means ratification of all necessary documents.

At the same time, experts are confident that Russia will not receive any benefit from Ukraine’s membership in the CU. Neither Russia nor the other members of the Union are interested in granting any preferences to Ukraine. Therefore, if associated membership takes place, it will be purely formal.

According to political analyst Pavel Svetenikov, it is Ukraine that is the key state in terms of creating an integration group in the post-Soviet space. And if in the future there will be an economic or political union between Ukraine, Russia and Belarus, then we can safely talk about the emergence of a large European center, an alternative to the European Union.

Ctrl Enter
Noticed a mistake Highlight text and press. Ctrl + Enter
We are
Dmitry Medvedev. Russia and Ukraine: life under the new rulesSituational analysis of the death of the MH17 flight (Malaysian Boeing 777), made on the basis of engineering analysis from 15.08.2014
354 comments
Information
Dear reader, to leave comments on the publication, you must to register.