April 5 2013
9
In 1938, the Hungarian government adopted a plan for the modernization and development of the armed forces. As part of this plan, in March 1938, the Swedish company Landsverk AB in Landskrona was ordered one copy tank Landsverk L60B. After being delivered to Hungary, he underwent comparative tests with the German Pz.lA. The Swedish tank demonstrated the incomparably better combat and technical characteristics. They decided to take it as a model for a Hungarian-made tank, called 38M Toldi ("Toldi") - in honor of the famous warrior Miklos Toldi, who lived in the XNUMXth century and was distinguished by huge growth and extraordinary physical strength. 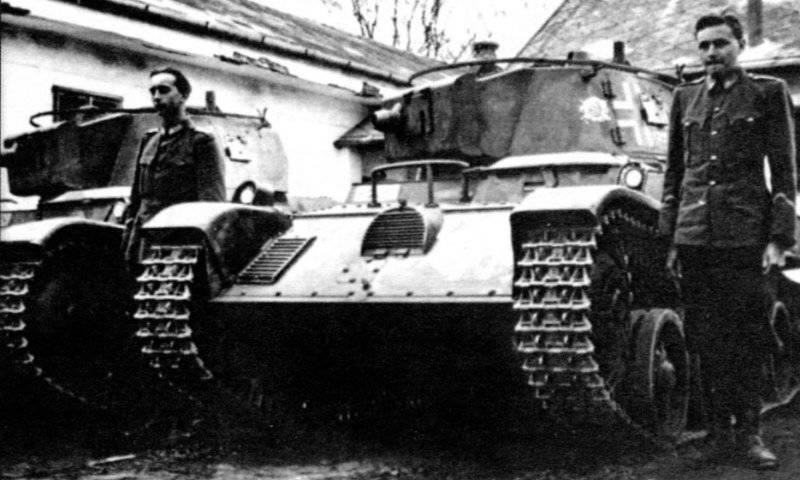 Light tanks "Toldi I" with not yet installed weapons. 1941 year 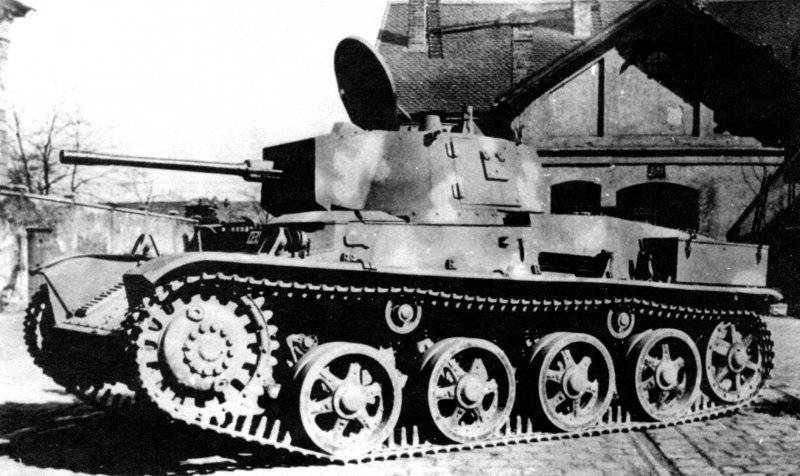 Prototype light tank "Toldi ON". The absence of the armored casing of the twin machine gun 34 / 40АM attracts attention. available on serial tanks

The commission that conducted the tests recommended making a number of changes to the design of the machine. In order to study the possibility of introducing these changes, the Hungarian Institute of Military Technology sent its specialist S. Bartolomeides to Landskron. The Swedes agreed to upgrade, with the exception of the steering system of the machine and the stopper of the tower. As a result, the tank hull and the undercarriage with an individual torsion suspension did not substantially undergo significant changes compared to the Swedish prototype. Minor alterations have undergone the tower, in particular, hatches in the sides, viewing slots, as well as mask guns and machine guns.

The forehead, stern and sides of the hull and turret were protected by 13-mm armor, the roof and the bottom - 6-mm, and the mask - 20-mm.

The Bussing-NAG L8V / 36TR carburetor engine with 155 hp, which reported the maximum speed of 50 km / h to the tank, was delivered from Germany, as well as observation and aiming devices. With the capacity of fuel tanks 253 l, the range on the highway was 220 km. The Toldy transmission consisted of a main friction clutch for dry friction, a planetary five-speed gearbox, a lockable differential and onboard clutches. 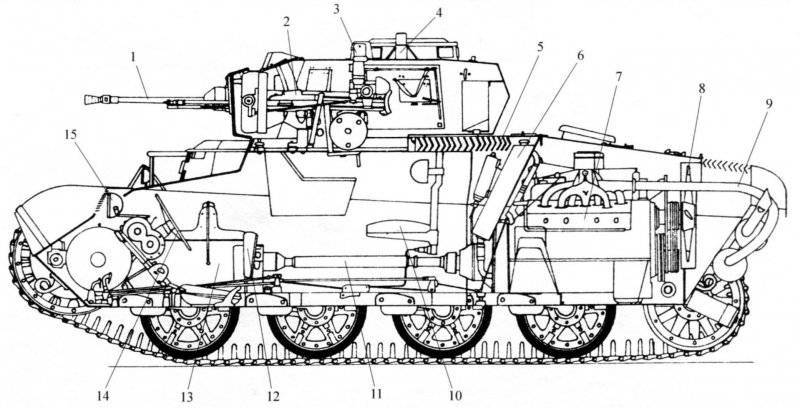 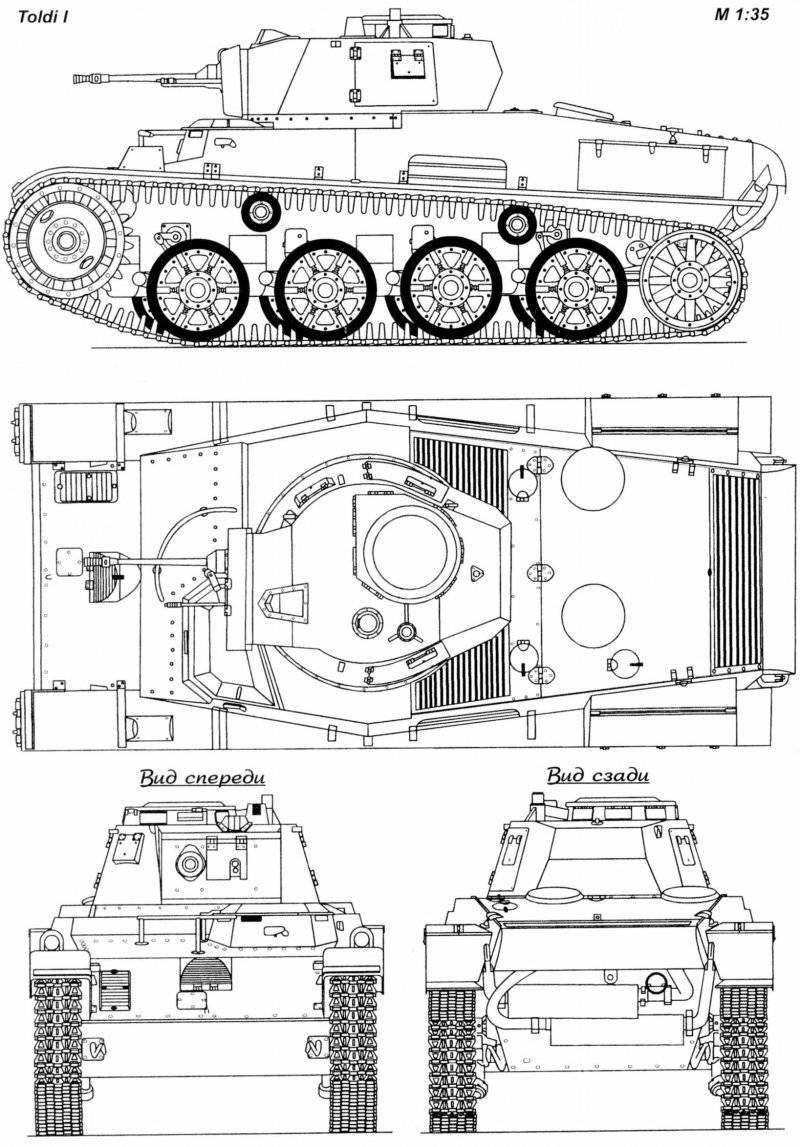 Unlike the Swedish prototype, armed with an 20-mm automatic Madsen cannon, in the Toldy tower they installed an 20-mm self-loading anti-tank gun by the Swiss company Solothurn, produced in Hungary under a license under the designation 36M. Power rifle carried out from the store for five rounds. Practical rate of fire equal to 15 - 20 shots / min. With a gun was paired 8-mm machine gun 34 / 37M. Ammunition - 208 rounds for rifles and 2400 - for machine guns. In addition, on the roof of the tower there was a bracket for installing an anti-aircraft machine gun.

The crew of the car included three people. The commander was located in the tower on the right, and he had a commander's turret with a hatch and seven viewing slots with triplexes. The shooter was sitting on the left and could observe through a periscope sight. The driver was located in the forward part of the hull on the left in a kind of armored cabin with a hatch closed with a sliding cover.

Tower tank "Toldi I". The armor cap above the machine gun shop is clearly visible, bolted to the turret roof. On the photo to the right is the commander's turret. In the foreground is a periscopic armored cap. 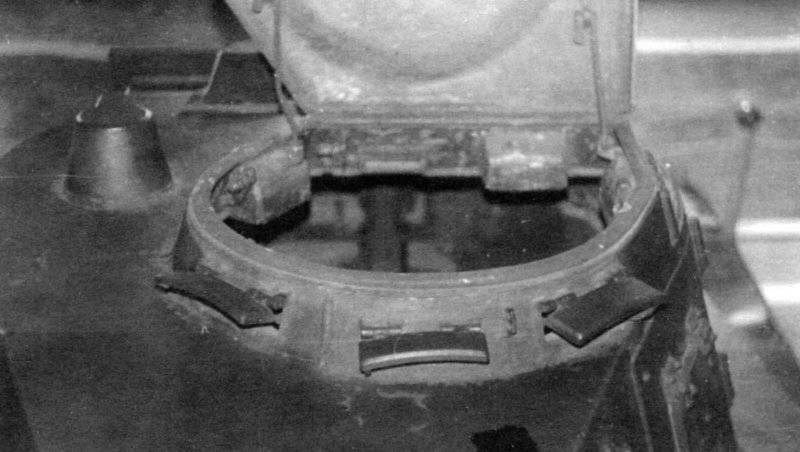 The first order for 80 machines "Toldy I", divided equally between the firms Ganz and MAVAG, was issued in February 1939 of the year. In the spring of 1941, there was an order for 200 38M “Toldy II” tanks with additional 20-mm armor for the frontal hull and around the perimeter of the tower. Ganz plant manufactured 68, a MAVAG - 42 "Toldy II". As a result, only 110 tanks of this modification were released. The first four "Toldy II" entered the army in May 1941 of the year, and the last - in the summer of 1942.

Toldy tanks entered service with 1 and 2 motorized and 2 cavalry brigades. These brigades took part in the hostilities against Yugoslavia in April 1941, and two months later in the so-called "rolling corps" - against the USSR. Initially, 81 Toldy was counted in them, and then 14 arrived. With the battles, the corps passed about 1000 km to the DoNets river, and in November 1941 returned to its homeland. Of the 95 "Toldy" involved in the battles, 62 machines were repaired and restored, and only 25 because of combat damage, and the rest due to breakdowns in the transmission. In general, the combat operation of the tank showed that its mechanical reliability was low, and its armament was too weak (the Solothurn gun at a distance of 300 m penetrated only 14-mm armor plate located at an angle 30 ° to the vertical). As a result, the tank could only be used as an intelligence and communications vehicle. In 1942, only 19 “Toldy” hit the Eastern Front, and in February, 1943 destroyed almost all of them during the defeat of the Hungarian army.

Toldi ON with armored screens

In an effort to increase the tank's combat capability, the Hungarians re-armed the 80 "Toldy II" 40-mm 42-gun with a barrel-length 45 caliber and a muzzle brake. The modernized 8-mm 34 / 40А machine gun was paired with the gun, the part of the barrel which protruded beyond the mask was covered with an armor cover. Mask armor thickness reached 35 mm. The mass of the tank increased to 9,35 t, the speed dropped to 47 km / h, and the cruising range to 190 km. Ammunition of the gun consisted of 55 shells, and the machine gun - from 3200 cartridges. A box for transportation of equipment was hung on the stern wall of the tower on the model of German tanks. This machine has received the designation 38M "Toldi ON". In the experimental order, the Toldy ON was equipped with mounted 5-mm armored screens that protected the sides of the hull and turret. The combat weight at the same time increased to 9,85 t. The R-5 radio station was replaced with an upgraded R / 5a.

An attempt was made to create on the Toldy chassis a light anti-tank SAU, similar to the German installation Marder. Instead of a tower in the middle part of the hull, the German 75-mm Cancer 40 anti-tank cannon was installed in the open and light-armored open-top and rear. In special boxes, mounted on the roof of the engine compartment, was placed ammunition. This combat vehicle has not gone out of the experimental stage.

At the end of 1942, Ganz proposed a new version, the 43M Toldy III, with frontal armor of the hull and tower increased to 20 mm. Mask guns and chopping mechanic-driver defended 35-mm armor. The wider feed of the turret allowed to increase the gun ammunition to 87 shots. 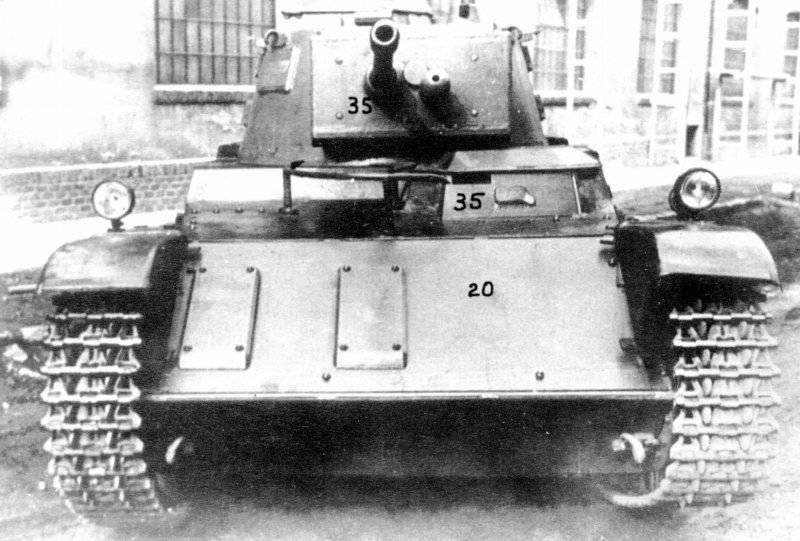 Serial "Toldy ON". The picture printed on the negative (most likely - the photoglass) the figures of the thickness of the front armor plates of the hull, the driver’s cabin and the mask of the paired installation were printed 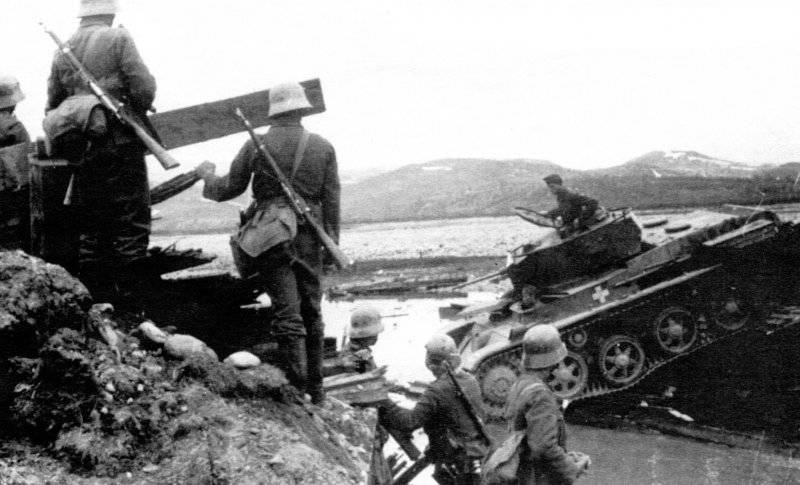 Light tank "Toldi I" from the 2-th tank division forwards across the river. Poland, 1944 year 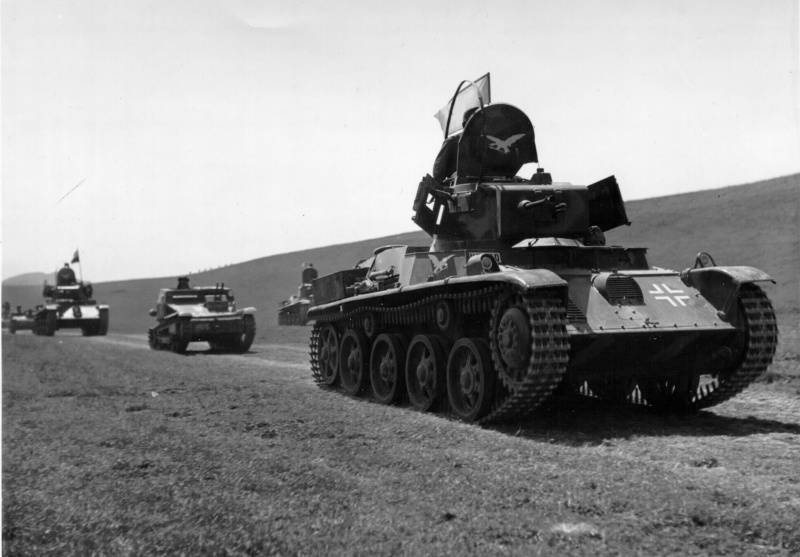 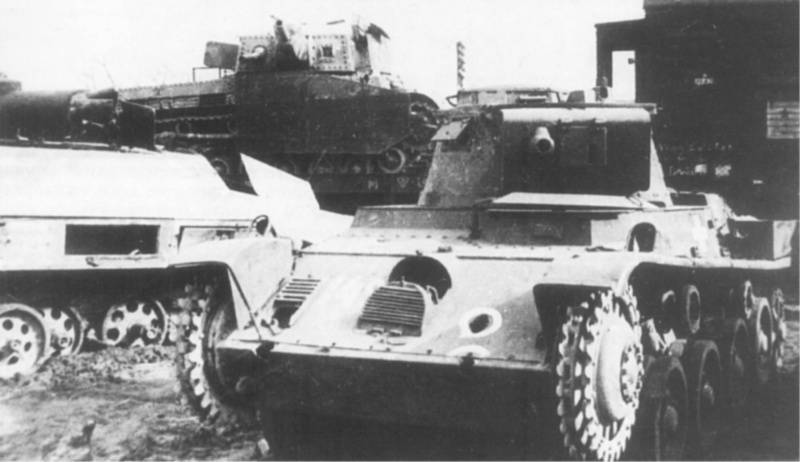 The wounded Hungarian light tank 38M "Toldi I" from the 2 th Hungarian Tank Division defeated in Budapest. The number of the Soviet trophy team "146". The front top sheet is pierced with a 57-76mm caliber projectile. Hungarian medium tank 41М "Turan II" on a railway platform

The order for this, the best, version of "Toldy" was issued, but in the 1943 year they were able to manufacture only three tanks, and in the 1944 year, according to unconfirmed reports, nine more. At that time, the main efforts of the Hungarian industry focused on the production of the Turan medium tank, which was more powerful, but was generally no less outdated than the Toldy.

So far, only two machines of this type have been preserved - “Toldi I” and “Toldi ON” (registration number Х460). Both of them are in the exposition of the Military History Museum of armored weapons and equipment in Kubinka near Moscow.

Light tank Toldi I. 1-I tank division, Dona district, December 1942 of the year

Light tank Toldi I. 2-I tank division, Poland, summer 1944 of the year 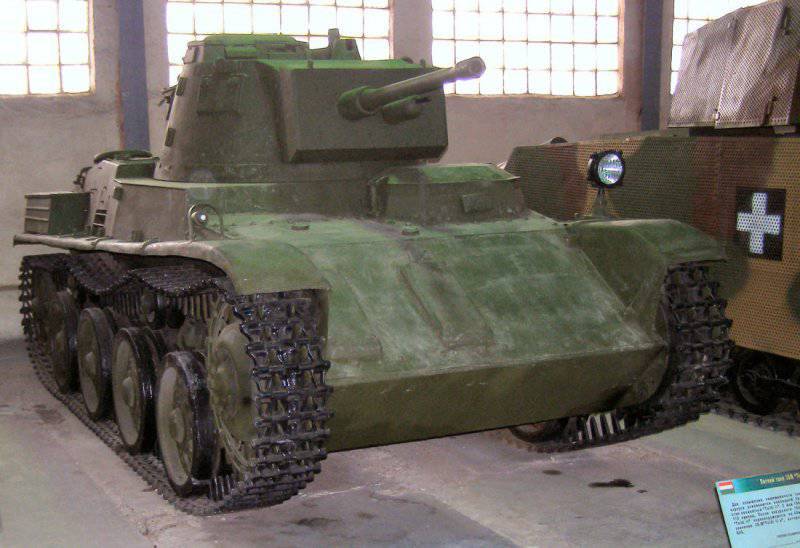 M38 "Toldi II" in the Armored Museum in Kubinka 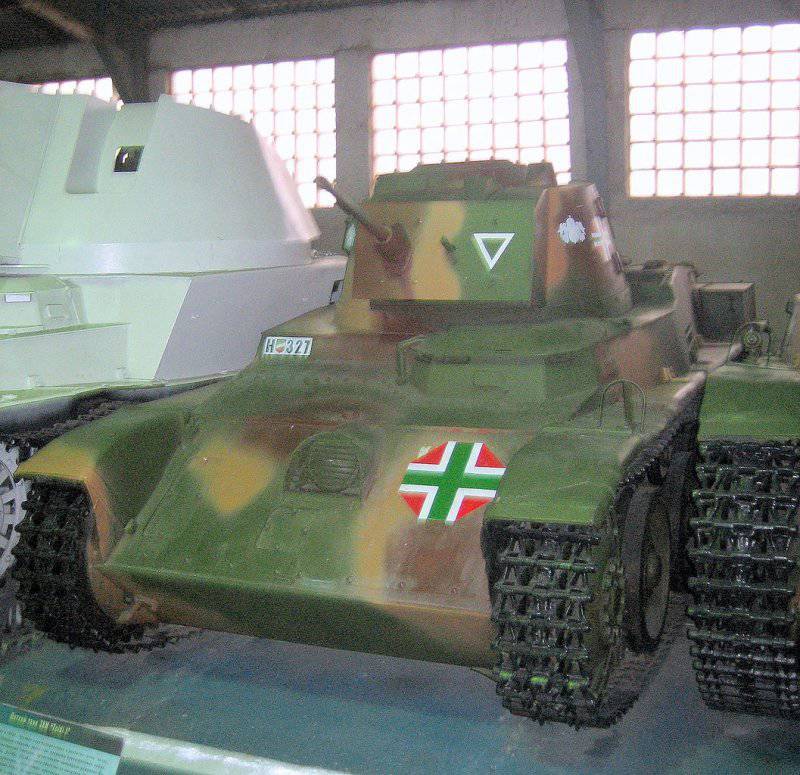 38M "Toldi I" in the Armored Museum in Kubinka