In vain they believed "bitch Goebbels." Or "devil Churchill" lured? 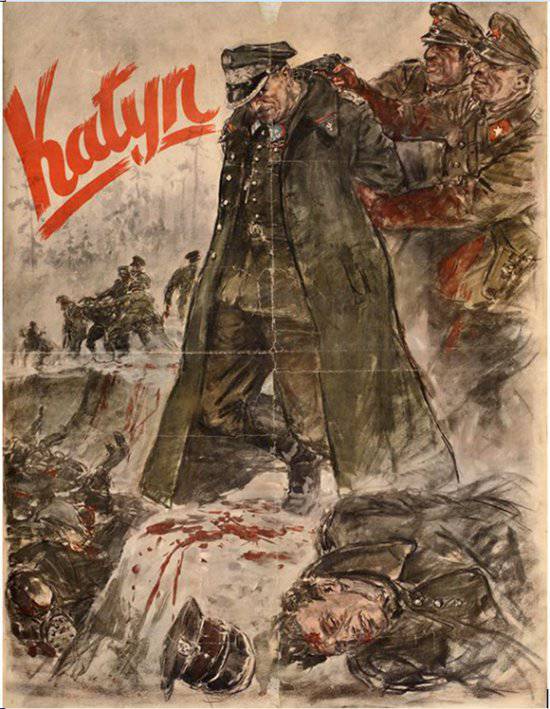 I watched a lot of archival "trophy" German photo and newsreels. And everyone who knows the theme of the German executions, once looking at the poster will instantly determine the same thing - it is the Germans who kill the Poles.

And this is in spite of the fact that two faces are painted on the poster of “red Russian executioners” - “Caucasian Jewish nationalities” and red “general stars on buttonholes”.

Externally, caricature claims falsehood, and at the level of the subconscious, hidden truth is powerfully asserted.

It is very interesting how a lie becomes true in this poster.

The Germans are trying to blame the Russians for the execution of the Poles, and right there, “according to Freud,” they unwittingly say that they did it themselves.

Let's see how they did it.

The German artist who fulfilled this order of propaganda of "Dr. Goebbels", brings his pedantry.

As an artist, I can guess how this “PR project” was going on.

The German artist - “white bearer”, himself, of course, did not fight and did not shoot, but with German thoroughness approached the topic. He was given documentary photographs of the German shootings, it was a favorite hobby of the Germans - to be photographed during executions, executions, gallows.

This is some kind of pathological, purely German age-old “necrophilic” passion. In the art of executions and other executions, they had no equal in Europe.

Here he is, the captured enemy, still alive: - Jew, Gypsy, Pole, Ukrainian, Belarusian, Russian, Serb, French, Italian, etc., or - Communist, Commissioner, Partisan, Saboteur, Hostage, etc. Here, the German put him on his knees and aimed at the back of the head, but here bang - and the enemy face down, izdoh. The next ... and so on.

The Germans made many thousands of such “necroslideshows” for the war, they carried them with them in their pockets and sent them to the girls from the front. German girls liked the heroes on the background of corpses.

The scene of a pistol shot to the back of the head, at close range, on a kneeling, humiliated opponent: a Pole, a Russian, a Ukrainian, a Serb, etc. — this was an absolute “artistic German stamp”.

All Germans knew how to shoot correctly. What can be shot in some other way, not in German, they simply did not guess.

The poster "Katyn" was made not for "Untermensch" - the Poles, but for intimidation of "Übermensch" - the Germans, which is why it was replicated throughout Germany. And he worked perfectly in German society.

The only thing that convinces the German is “correct German” work, and only this can be shot. So on the poster "Katyn" is a typical German shooting. And all this is immediately "read unconsciously," despite the external "red masquerade."

Now about the punctures in the details.

The Pole on the poster is similar to "Pan Pilsudski" and drawn with knowledge of the matter. Confederate and overcoat, all small details convince that it is a Pole. Apparently, the artist had in front of him real photographs of executions of Polish officers, and drew them from them. You look in the "German trophy archives", I am sure that somewhere in England or America you will find pictures of real shootings of Polish officers by Germans.

Indeed, in the 1941 year, the “Reds” were crushed and fled in panic, until the capture of Moscow, according to the plan, only a few months remained, so the Germans did not hesitate with the Poles, as well as with the Jews and the Communists. There are documentary photos - scenes of executions in “Babiy Yar”, there are also scenes of execution in “Katyn”. How else.

The Germans are Germans - the “iron order”: you must have a case by number, a photo, a precise plan on the ground, a full report and award lists of the best workers. You see, they will be there soon.

It is hoped that the all-knowing “MazoSad” will catch on and “help” their “sworn friends” - the Poles to learn the truth.

I am sure that the German artist drew from a genuine, documentary photo of the Polish shooting by the Germans, hence such accuracy in the details, but there was no “Russian execution”, I had to draw “gag”.

He was ordered to draw evil “Russian” snouts, that is, a Georgian and a Jew, and to replace the German form with the Soviet one. Yes, and so that the red stars were bigger.

The artist completed everything as ordered, replaced the form, painted atrocious muzzles similar to “Stalin-Trotsky,” hands in blood above the elbow.

There is such a game, “what, children, is the artist still lying here?”

Well, first. Who served in any army, he will immediately understand.

The Pole on the poster, as the military would say, is in a “winter uniform”, that is, in an overcoat, and on the poster winter is drawn - white snow, there is neither grass nor leaves. This is confirmed by the excavated graves in Katyn. There, Polish officers also wore overcoats and winter uniforms and were shot by the Germans, in the winter or late autumn of 1941.

The artist here painted an involuntary, documentary truth - this is the winter "Katyn" shooting of the Poles by the Germans.

And we brazenly "vparivayut" that they were killed by the "red" in the spring or summer of the peaceful 1940 year, and even in the recreation area in the territory of the pioneer camp near Smolensk? How would it "corpse" stink at all resorts in the summer of 1940?

And why then are the “red executioners” dressed on a poster not in winter uniform, but in a summer uniform, in one “tunic”? What hot guys like "marten"? (By the way, the artist did not see his tunic, so he drew it).

According to the “Soviet military regulations,” if it is winter, then they too should be in their overcoats and in winter hats with earflaps. Shooting in a ditch is well round the clock work in the wind and frost, and the personnel must be protected. Here is a photo of the execution, where the Germans hang “Zoya” - so everything is in overcoats, and on the head there are headphones, correctly, in good order, all according to the German regulations. 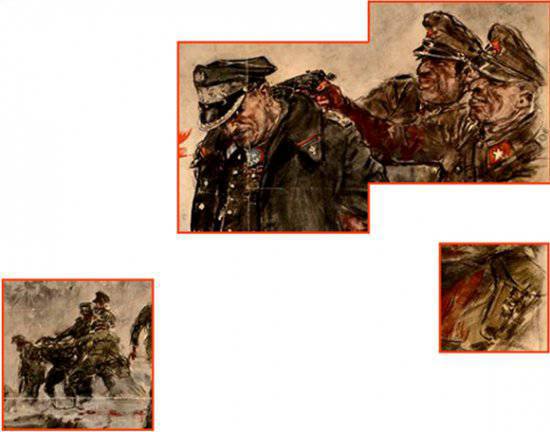 The “red executioner” has a holster from the German “lugger” on the belly to the left. Only Germans wore holsters. And no one noticed that the “red” officers should wear a “Russian-style” holster - on the side of the right and behind “for jo ...”, and not for “in German”. Because according to the “Russian charter”, this is how it should be worn. Yes, and the Russian infantry officer had to crawl on his belly "in a fitful manner, if you want to live.

This puncture is easily explained. In 43, the Germans in Germany did not yet know what the “red commander” looked like; they only saw it a year later. Therefore, the image was created by looking at a German infantry officer.

What weapon and the holster should be on the poster "Soviet", for some reason it did not come to the German head. And the pistol - “Walter”, although it sticks out out of hand, but it is drawn just as accurately from the photo.

So what, they say to me, everyone now knows, are these “red” specially fired Poles from the German “Walters”?

But only this fact was revealed, only after Burdenko’s “red” commission in 1944, and before that none of the artists in Germany knew this. And the Germans tried to conceal the fact of the murder of Poles from German standard weapons, which is why the corpses were so carefully prepared for the arrival of the “international commission”, cleaned the sleeves from the “Walters” and filtered the other “material evidence”.

Yes, and in the background, where it is not necessary to lie in details, the artist expressively made a masterful, true “sketch” - a sketch of silhouettes with real “firing” German photography - “einsatzkommandos” at work.

What, a German artist suddenly painted - and again the "random" truth? No, he just honestly, in German, just executed the order and drew as it was in the documentary photo.

By the way, the portrait of the officer’s Pole was made realistically and clearly from a real photo, and the faces of the “red executioners” are just caricature and trash.

Therefore, such a contrast of details: the documentary truth of the German winter shooting of a Pole in his overcoat and a lying, caricatured “red bullshit”.

Guys, try to make a collage, instead of the "red executioners" mount German portraits in the field uniform. It's so easy, you don’t even need to change the holster and the pistol, everything is already drawn. The effect will be amazing, everything will immediately become true.

But it would be better to find and make public the original originals of the documents and photographs of the German shootings of the Poles in Katyn. And they are and are just waiting in the wings. The fact that this moment has already matured, they say all the latest mystical, tragic events.

And the Poles will have to quietly correct the whole of this world-wide Polish “hackwork trust” - the monumental propaganda of “Katyn”. Do not worry, it’s often enough just to change the dates from “1940” to “1941”. It is necessary, of course, to make excuses, to say that they believed in vain the “bitch Goebbels” and “the devil lured”. Well, we, of course, we will forgive them, and that is how.