In Kuban, command and staff exercises began with an airborne assault (mountain) formation of the Airborne Forces 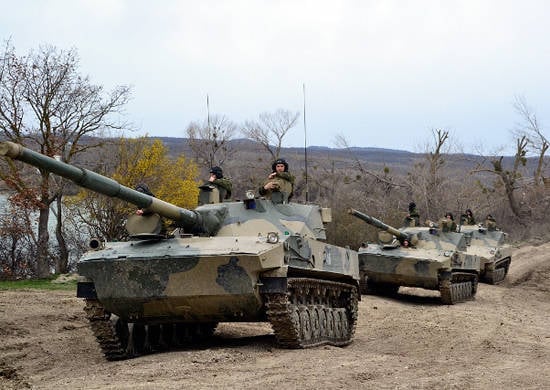 From 1 to 5 in April, a planned command and staff exercise is held in the Krasnodar Territory with the 7 Guards paratrooper (mountain) division of the Airborne Forces (Airborne Forces) stationed in the region.


In the course of the exercise in practice, questions of training and conducting combat operations in a special operation will be worked out, as well as the ability of commanders and military personnel to carry out tasks as intended.

In addition to the divisions and regiments, communications units, support and marking of the actions of their troops and the enemy, artillery of the Ivanovo airborne formation, calculations of a separate communications regiment and a special-purpose airborne regiment take part in the exercise.

The active phase of the exercise will take place on April 4-5. At the first stage, parachute combat will be played (with a reconnaissance platoon landing on the Arbalet-2 parachutes and three P-7 parachute platforms on multi-dome parachute systems) to capture the conditional enemy’s airfield and engage in a profitable line, fighting to complete the destruction of its manpower as well as the landing of an assault landing platoon "by assault" from helicopters of army aviation.

At the second stage of the exercise, the “blue berets” will seize and hold one of the sections of the seacoast, work out the actions of division divisions while repelling the landing of a paratrooper of a conditional enemy.

One of the main objectives of the exercise is to test the work of the division and regiment's management bodies in organizing tactical actions, organizing and maintaining interaction between military units and units of the armed forces and special forces in the complex situation of modern combat using an automated control system (ACS) at the tactical level.

The exercise management team is headed by the Chief of Staff - First Deputy Commander of the Airborne Forces Hero of Russia Lieutenant General Nikolai Ignatov.

The 7 Guards Airborne Assault (Mountain) Division of the Airborne Forces conducts its own history from December 1944.

In August 1993, the military units of the compound were redeployed from the Baltic to the territory of the North Caucasus, and now the Southern Military District, and stationed in the cities of Novorossiysk, Stavropol, and Anapa.

In 1993-1996 the personnel of the formation performed peacekeeping tasks in Abkhazia, then the paratroopers took the most active part in counter-terrorist operations in the North Caucasus region.

For the courage and bravery shown in the performance of military duty, more than 500 paratroopers of the division were awarded high state awards, 15 of them became Heroes of Russia.

Since August 2012 has been commanded by a guard, Colonel Valery Solodchuk, with a compound.

Ctrl Enter
Noticed oshЫbku Highlight text and press. Ctrl + Enter
We are
Innovation Day of the Southern Military District: Pictures from the ExhibitionThe newest attack helicopters Mi-35М were tested on the Kuban
20 comments
Information
Dear reader, to leave comments on the publication, you must to register.