The robot has mastered the flight of dragonflies

April 2 2013
10
The German company Festo has demonstrated its latest development - the BionicOpter UAV, which is trying to reproduce the flight of a dragonfly. 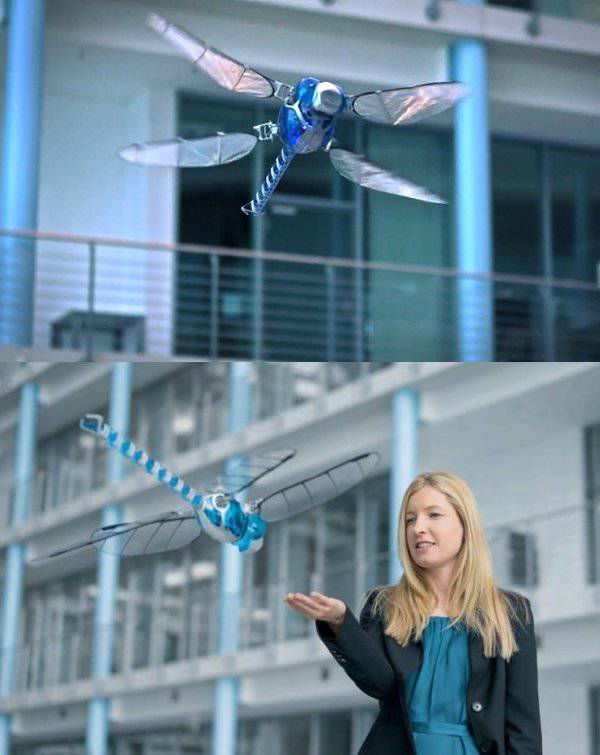 The drone, of course, is still larger than the natural prototype. Nevertheless, it is the most advanced UAV, flying in the manner of a dragonfly. (Here and below is the photo of Festo.)

From the “head” to the tail, the robot has 44 cm, and the wingspan is exactly equal to 63 cm. Of course, there are no such giants among modern dragonflies, but the fossil representatives of these predatory insects have also reached much larger sizes. Low weight - total 175 g - achieved by the skillful use of lightweight materials: the wings are a carbon fiber frame with a polyester membrane stretched over it; other materials are aluminum, ABS-based tripolymer and foamed polyamide. ARM processor is used to control the drone. The role of the muscles controlling the head and tail is played by four bundles of nitinol fibers (a nickel-titanium alloy) that can shrink (“shape memory”) when heated, caused by the passage of electric current through them. The wings are also driven by a more familiar electric motor for robots.
The choice of the frequency of strokes and the changeable angle of attack of the wings is fully automated, so that the operator (using, for example, a smartphone) controls only the steering. A pair of lithium-polymer batteries was chosen as a power source. According to the manufacturer, robostrekoza can quite perfectly copy the flight methods of ordinary dragonflies, including moving backwards and flapping their wings to 15 – 20 once a second. In principle, the words about the perfection of flight, said by the developers, you can believe:

However, with all the advancement of the drone there is something to finish. Thus, the most highly maneuverable flight mode is not shown, with overloads to 9g, in which the dragonflies first flap their hind wings and only then with their front wings:

The flight demonstrated by BionicOpter is characteristic of high-speed movement used by a dragonfly not so often. 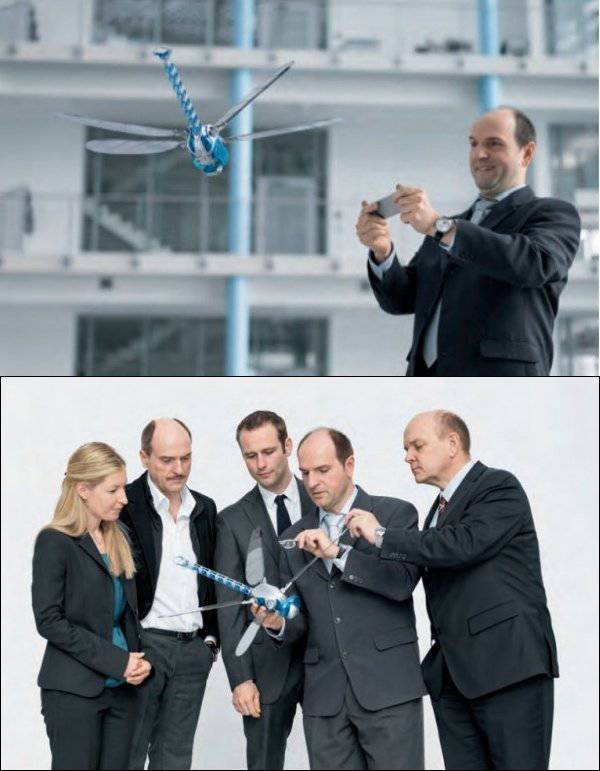 In addition, the video shows that the wings of BionicOpter, despite the carbon fiber frame, lacked (in comparison with the natural analogue) stiffness. Dragonflies that do not have carbon fiber and polyester, but have pterostigma, clearly have tougher wings, which can not but affect their aerodynamics:

But let's hide our skepticism: the human experience in copying the aerodynamics of four-winged insects is insignificant for the time being, and its lion’s share belongs to Festo. Taking into account the significance of the demonstrated bionic achievements, it is logical to assume that in the near future, developers will select the most difficult flight regimes of real dragonflies.

Data on the maximum speed reached is not specified, although, judging by the video, they clearly do not exceed 50 km / h, which characterize the prototype insect. Recall that Festo is considered the designer of bird-like drones, widely used by US intelligence services (more precisely, while only one of them is used) for conducting reconnaissance in Pakistan and Iran - areas where ordinary (undisguised) American drones cause some confusion, often turning into firing and active use of air defense. At the same time, although the dragonfly robot is too small for conducting long-range reconnaissance, there is no doubt that with some refinement of the appearance and further miniaturization, such a drone will turn out to be a real find.