April 2 2013
15
After the defeat of France and the Dunkirk evacuation, Great Britain, as well as its colonies and dominions, remained the only countries leading the armed struggle against the Axis powers. Modern technology and strategic materials are not enough, so it was decided to resort to the procurement of necessary equipment from an overseas neighbor. Initially, US enterprises sold equipment and weapons against provisional cash. But since Britain’s gold and currency reserves were rapidly melting, and the international situation was not improving, and the threat of war spreading to the United States, under pressure from President 11 in March 1942, the US Senate and House of Representatives passed the Lend-Lease Act (lend - lend, lease - lease), granting the US government the right to sell, transfer, lease or otherwise supply military materials and information to the government of any country if its “defense against aggression” is important for the United States. States


The law established a system of lend-lease payments:
materials destroyed during the war or unsuitable for further use are not subject to any payment;
materials remaining after the war and suitable for civilian needs are paid in full or in part in the form of a long-term loan;
war materials remain in recipient countries, the US government reserves the right to reclaim them;
equipment that was not completed by the end of the war, and ready-made materials stored in warehouses in the United States can be acquired by customer states, with the US government providing a loan to pay for it. 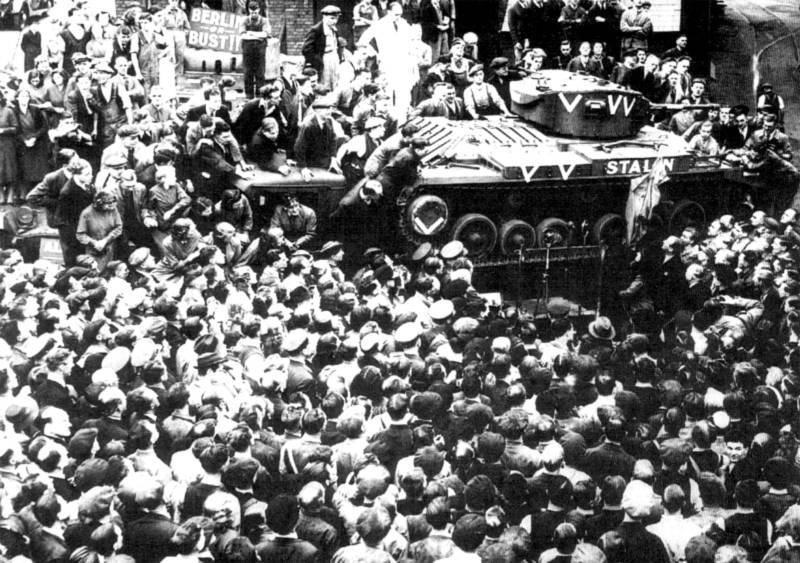 Photo of the Birmingham rally on the occasion of the transfer of the British tanks USSR, 28.09.1941/XNUMX/XNUMX

The adopted law was intended mainly to regulate the supply of arms and strategic materials to Greece and England, but the situation has radically changed with the entry into the Second World War of the Soviet Union. In the evening of June 22 1941, speaking on the radio, British Prime Minister Winston Churchill said that over the past 25 years, no one has been a more consistent opponent of communism than he. But now the United Kingdom has one fixed goal: it is determined to destroy Hitler and the Nazi regime. Therefore, any state that fights against Nazism will receive British aid. "We will provide all the help we can to Russia and the Russian people."

24 June and the US government has declared its readiness to support the Soviet Union in the fight against the German fascist invaders. Already 12 July 1941, the "Agreement between the governments of the USSR and Great Britain on joint actions in the war against Germany" was signed. On the Soviet side, the document was signed by I.V. Stalin and V.Molotov, with the English side - the British ambassador to the USSR S.Kripps. 16 August 1941, an agreement was reached with England on trade, credit and clearing. It provides for a loan to the Soviet Union in the amount of 10 million pounds, as well as the supply of British tanks, aircraft and other types of weapons on principles similar to the American lend-lease. At the end of July, US President F. Roosevelt sent his personal representative Harry Hopkins to study the military and economic situation of the USSR. Based on the results of his 5 September mission, 1941, it was decided that the United States would cover half of the Soviet armament bid promised by Britain. In September, W. Churchill informed the Soviet side about the start of British supplies to the USSR. The Anglo-American mutual assistance talks, which began in London on September 15 1941, were very tense, as the United Kingdom wanted to redistribute the flow of American aid itself. However, such a proposal was rejected by the American side. 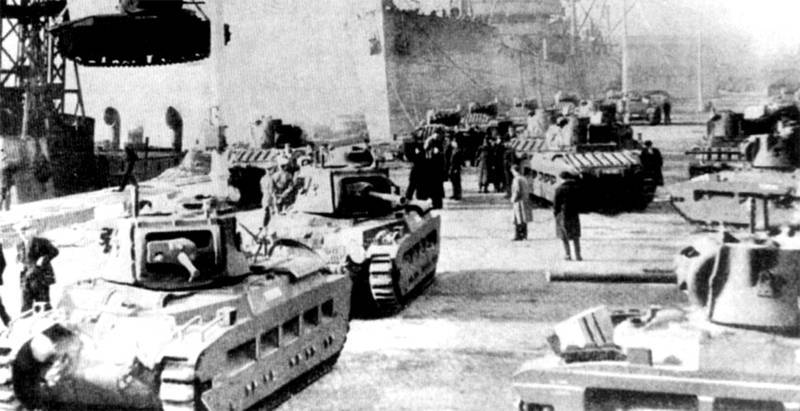 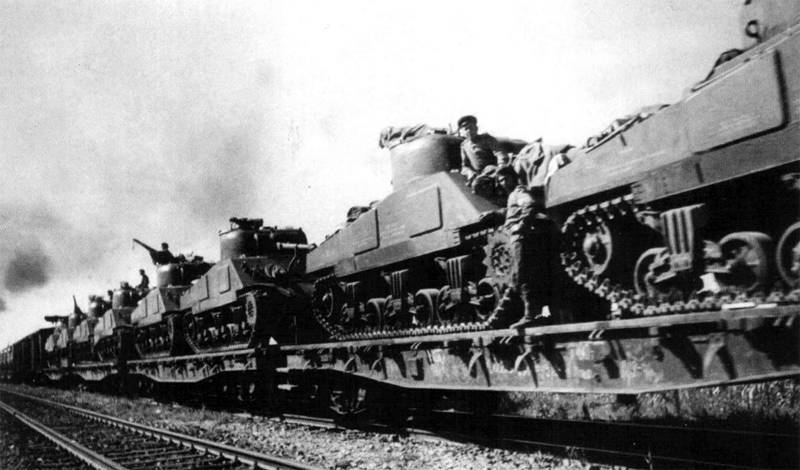 September 28 A.Harriman and G.Stendli with Lord U. Beeverbrook arrived on board the cruiser "London" in Arkhangelsk, from where they left by plane to Moscow. September 29 started the Moscow conference of representatives of the USSR, the UK and the USA. From the Soviet Union, JV Stalin, KE Voroshilov, representatives of defense, navy and foreign drug addicts participated in it. According to the results of the conference, the Soviet Union lend-lease benefits were extended from October 1 1941. A. Garriman signed a protocol for 9 months with a volume of 1 billion dollars. November 7 this decision was confirmed by the President of the United States, but the actual supply of armored vehicles began only with the 1942 year, since the United States only launched its own tanks. Therefore, in the 1941, only British armored products were supplied to the USSR.

In February 1942, Roosevelt advanced the second billion dollars and wished to revise the terms of the loan. These issues were discussed in Washington during Molotov’s visit to the USA in May 1942. A second protocol was prepared for the 1 year, according to which deliveries with a total volume of 8 million tons of cargo were planned. 10-12 March 1943, the House of Representatives and the Senate of the United States approved the extension of the Lend-Lease Act. At the same time, in the 1943 year, British shipments to the USSR decreased by more than 1942 / 2 compared to 3 a year. In accordance with the adopted protocol, Canada assumed the British obligations to supply the USSR. Despite diplomatic difficulties (until the USSR and Canada had no diplomatic missions before 5.02.1942, and only 12.06.1942 was established official relations between them), Canadian products began to arrive in the USSR in large quantities (including Valentine tanks and tank repair shops). ). American, British, and Canadian shipments to the USSR continued until July of the 1945 year, but the Red Army also used allied tanks and trucks in the war with Japan.

In order to analyze the ways and volume of cargo traffic of armored vehicles, it is necessary to study the documents on the organization and functioning of the reception departments of tanks (military "acceptance"). It was precisely to those points (with the exception of the Moscow Training Center in Gorky that received quite a lot of foreign equipment) where departments or groups for receiving armored vehicles were organized, foreign tanks and armored personnel carriers arrived. The closure of a military unit of military acceptance was the result of the termination of the cargo traffic of equipment in this area. The first allied transports with weapons and armored vehicles began to arrive in the port of Arkhangelsk in November, and in Murmansk - in December 1941. After unloading, the tanks were sent to the training center (Gorky), where they were received and mastered. However, 20.01.1942 in Arkhangelsk itself was organized by the department of military acceptance of foreign armored vehicles, and 4.04.1942 the same unit was formed in Iran for delivery of equipment through this country or through southern ports (the "Iranian" department of military acceptance was engaged only in cars, and tanks overtaken by a special brigade were taken in the city of Gorky). 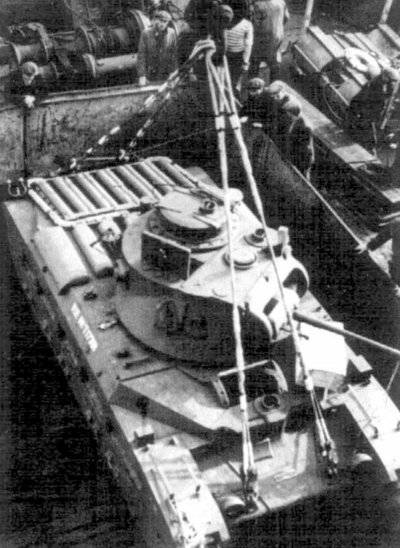 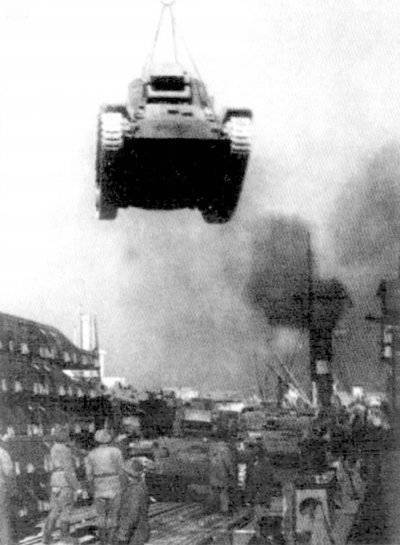 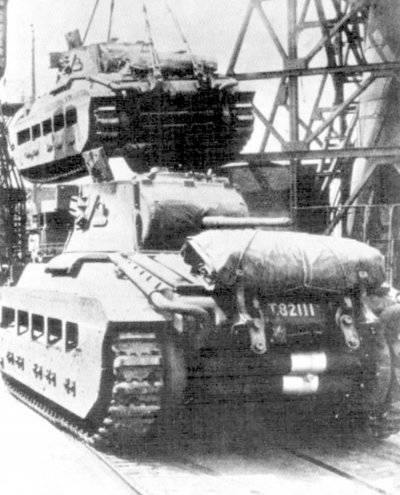 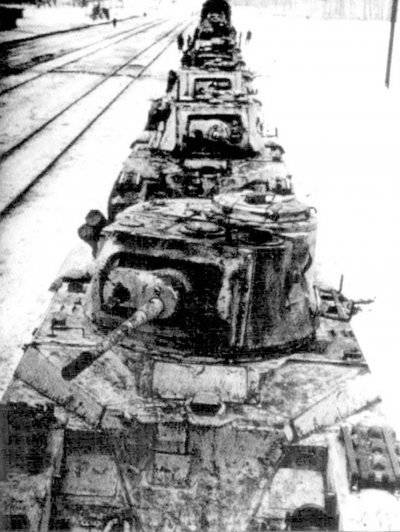 By the middle of 1942, in the North, there was an Arkhangelsk armored vehicle receiving center with branches (groups) in Bakaritsa, Molotovsk and Ekonomiya, Murmansk and Gorky tank accepting departments, "Iranian" and Gorky automobile and motorcycle accepting departments. In September, 1942, in connection with small volumes of supplies, was abolished the “Iranian point” of military acceptance of vehicles, and in December, 1942, due to the fact that the Germans cut the Murmansk-Leningrad highway, the Murmansk tank reception department was also abolished. In March, 1943 caravans with armored vehicles began to arrive in the port of Baku, in September 1943 - in the port of Vladivostok, where, accordingly, two new departments for receiving allied equipment were organized. Since the beginning of 1944, due to the improvement of the military and political situation, the Murmansk department has resumed its work. The last major direction of Allied deliveries was the path through the liberated Odessa, where due to the closure of the Baku branch in February 1945, its own department for receiving BT equipment was opened.

Thus, during the entire period of the war, there were three main areas of supply of armored vehicles in the USSR:
North (ports of Arkhangelsk and Murmansk)
Southern (ports of Baku and Odessa)
Far East (Vladivostok)

Deliveries of light SAU, ZSU and BTR in the USSR for 1944

At the end of the Second World War, various equipment, supplied under Lend-Lease and mutual agreements in the USSR and suitable for civilian needs, was to return to the sending countries. Therefore, part of the trucks after the overhaul in 1947 was returned to the American side. As for armored vehicles, in order to avoid returning tanks and armored vehicles to Great Britain and the United States (already potential enemies), the USSR government presented the remaining tanks and armored vehicles as scrap (in general, it was not far from reality), and few serviceable during 1946-1947, the vehicles were handed over to the allies in the socialist camp. From the financial point of view, the American government, which “forgave” all the other countries of the Lend-Lease system, paid for supplied weapons and materials against the Soviet Union (of course, for political reasons) continued to make claims, assessed first at 2,6 and then in 1,3 billion dollars. But the real agreement was reached only in the years of "detente" (18.10.1972). It was decided that the Soviet Union had to pay 722 million dollars subject to the provision of the most-favored-nation treatment in trade with the United States, as well as export credits and guarantees, to it by the American side. However, the implementation of the agreements was not implemented by the American side in full, which gave the Soviet Union a reason to refuse to pay the agreed amount.