April 2 2013
36
In light of recent developments regarding the DPRK’s nuclear program, it is once again coming to the forefront of international politics. The official statements of official Pyongyang, which follow one another almost every day, only add fuel to the fire. 30 March DPRK announced that its relations with South Korea "entered the military phase," and all problems will now be solved "as in wartime." If we take into account these formulations that North Korea has in fact declared war on its southern neighbor. At the same time, officially both parties to the conflict more than 60-year-old of the peace treaty had not previously signed.


However, the Republic of Korea is not inclined to over-dramatize the situation. DPRK statements in Seoul are regarded as a continuation of the policy of verbal blackmail. The South Korean Ministry of Defense confirmed the fact that there were no signs of preparation for an attack and unusual troop movements in the northern neighbor’s troops. At the same time, a few days ago, the head of the DPRK tourism organization, who visited China, assured the concerned Chinese tour operators that “there would be no war,” urging them to send “as many tourists as possible” to Juche Country. It is worth noting that the five-day excursions in the DPRK with a visit to the cities of Pyongyang, Kaesong, Wonsan, and the Kymgansan mountains cost almost 1000 dollars. In a country that is experiencing an acute shortage of foreign currency, tourism is very important.

Nuclear program of the DPRK

The DPRK is one of the first countries in the Asia-Pacific region, which launched secret work on the mastery of military nuclear technology. This is largely due to the situation that developed on the Korean Peninsula after the end of the Second World War and which resulted in the full-scale Korean war 1950-1953 between the North and the South. The US and its allies, as well as the PRC and the USSR, were drawn into this military campaign. The deployment of American troops and an arsenal of American tactical nuclear forces in South Korea contributed to maintaining tension in the region. weapons sea ​​and air basing. At one time, the leadership of North Korea had serious concerns that in the course of a possible military conflict on the peninsula, these weapons could go into action. 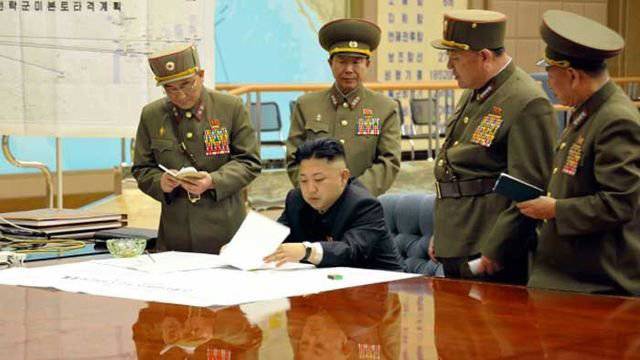 The first ruler of the DPRK, Kim Il Sung, attached great importance to nuclear rocket research. He was one of the first leaders of the third world countries to evaluate the potential of a new weapon and, despite a large number of difficulties, began to seek possession of it. The first clear lesson was taught to him by the USA when they launched nuclear strikes on the Japanese cities of Hiroshima and Nagasaki. These field tests of the new weapon made a stunning impression on him. And they vividly demonstrated to the future North Korean leader that nuclear weapons are not a “paper tiger” and their use for military purposes can be crucial in achieving victory over the enemy. Kim Il Sung received a second lesson during the Korean War, when the US military and political leadership seriously considered the possibility of launching nuclear strikes against North Korea. It is worth noting that the DPRK leader turned out to be a diligent student and the creation of their own nuclear weapons has become one of the main programs of the DPRK for many decades.

The active start of work on the nuclear program can be considered the establishment of a research center in Yongbyon in 1964, where, along with research in the field of nuclear energy, military-applied research soon began. This center was founded with the direct support of the USSR. Already in 1965, the first research reactor IRT-2000, with a capacity of 2 MW, was commissioned here. Since 1985, the construction of another nuclear reactor began in Yongbyon, this time its capacity should have been 50 MW. Also in the Thonchon region, the construction of a 200 MW reactor was launched. According to experts, these reactors have a dual purpose.

The nuclear program in the DPRK is directly headed by the Ministry of Atomic Industry, which is part of the State Administrative Council (Cabinet). Today, when the design of the simplest nuclear warheads has ceased to be a secret, the most critical element of military nuclear programs is obtaining the required amount of fissile material - plutonium or highly enriched uranium. For its nuclear program, North Korea has chosen plutonium as the main basic fissile material. That is why the information on how much weapons-grade plutonium North Korea currently has has the greatest practical value. 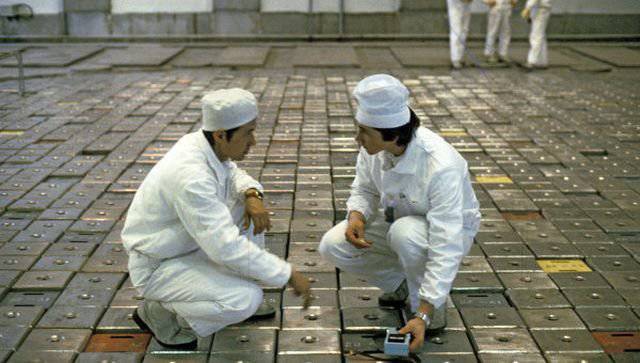 At the same time, the high secrecy and secrecy of North Korean society does not provide an opportunity to give an unambiguous answer to this question. Therefore, here you can only rely on the information of the special services, which was transmitted to the media and the results of approximate calculations. So, for example, to determine the approximate amount of plutonium produced in reactors, experts often use the following simple relationship: during the day, a working reactor is able to produce 1 grams of plutonium per megawatt of its capacity. Based on this, the 5 MW reactor in Yongbyon is able to produce an 5 gr. plutonium per day or up to 1,8 kg. per year, and the 50 megawatt reactor is already up to 20 kg. plutonium per year, which is enough to make 4-5 nuclear weapons.

Over the past decades, the DPRK has been working to create an extensive nuclear infrastructure, which includes not only research, but also manufacturing enterprises. At present, the general public knows the location of the main nuclear facilities of the DPRK.

Yonben
It is actually the main center for the design and manufacture of nuclear weapons. Atomic Energy Research Center, which includes: Institute of Nuclear Electronics, Institute of Nuclear Physics, Institute of Radiation Chemistry, Institute of Isotopes, Radiochemical Laboratory, Critical Assembly with 0,1 MW and also 3 Reactor: 5 with Thermal Reactor MW and 8 MW reactor. The center also has a nuclear fuel plant, an isotope processing plant, and an explosive device testing ground. 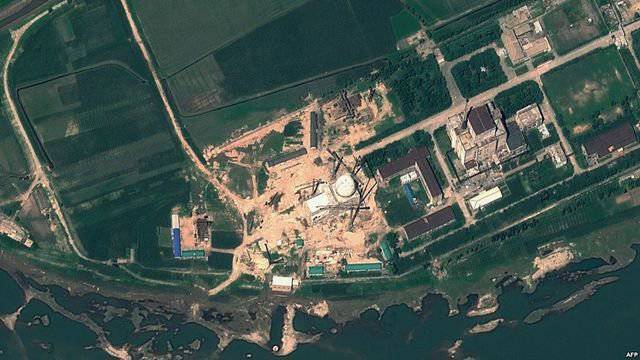 Pakcheon
The operating uranium mine and the concentrating enterprise, the research center of an atomic energy. Presumably in this center are developing nuclear weapons.

Hamhyn
University of Chemical Industry, is engaged in training specialists in the field of processing of nuclear materials.

An analysis of North Korea’s nuclear infrastructure indicates a wide range of work in this area. At the same time, they cover all aspects of this rather complex scientific and technical problem. Attention is drawn to the fact that large research centers were established in the DPRK, which are able to conduct not only theoretical but also practical research in this field. In this case, the weakest link looks at the available production capacity of the DPRK to obtain weapons-grade plutonium. This deficiency is the main limiting factor for North Korea in the matter of accumulating its military nuclear arsenal. 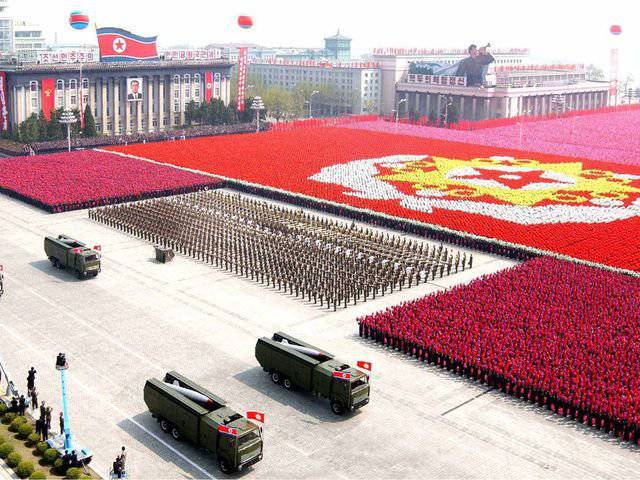 North Korea joined the Treaty on the Non-Proliferation of Nuclear Weapons (NPT) in December 1985 of the year, but already in March of the year 1993 declared its desire to withdraw from it. However, the exit dragged on 10 for years, during which the DPRK, if you call a spade a spade, blackmailed the world community with this issue, using it as a trump card in its international politics. 11 January 2003 of the DPRK was formally freed from all NPT obligations.

10 February 2005 of the year North Korea for the first time officially recognized the fact of the existence of nuclear weapons of its own production. This was announced by the Ministry of Foreign Affairs of the country, which noted that the DPRK's nuclear weapons are “the force of nuclear deterrence” and are “entirely defensive” in nature. October 9 The DPRK 2006 conducted the first underground test of a nuclear device. According to the information of Russian specialists, the capacity of the underground explosion was 10-15 kt.

Under pressure from the world community, the DPRK suspended its nuclear program on 3 of the year, but eventually resumed its 14 on April of 2009. At the request of North Korea, the IAEA inspectors left the country. 25 May 2009 of the DPRK conducted a second nuclear test. According to the Russian Ministry of Defense, the power of the tested nuclear charge ranged from 10 to 20 CT. Also in May 2010, the DPRK announced successes in thermonuclear fusion, which could increase the power of its nuclear weapons by a hundred times. 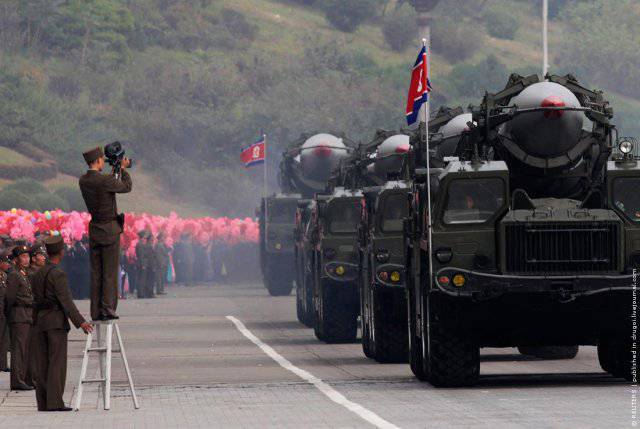 At the end of 2012, the South Korean Ministry of Defense released the White Paper, which provided expert opinions from both South Korea and the United States on the expansion of North Korea’s nuclear program. Having analyzed the images from space, the experts stated that the DPRK has other enrichment facilities other than a large center in Yongbyon. Also in this book was information that North Korea has about 40 kg. weapons-grade plutonium, which was obtained by reprocessing spent fuel rods four times.

The third round of the DPRK's nuclear tests, which were carried out on February 12 of the year, contributed to the latest spiral of exacerbation of international tensions on the Korean Peninsula. The Russian special services rated the power of the blasted nuclear device in 2013 kt. After the third nuclear tests, the DPRK’s rhetoric became more aggressive and led to the escalation of the conflict between the two Koreas, so far only in the form of verbal attacks and threats.