Not so bad in the Danish (Russian) kingdom 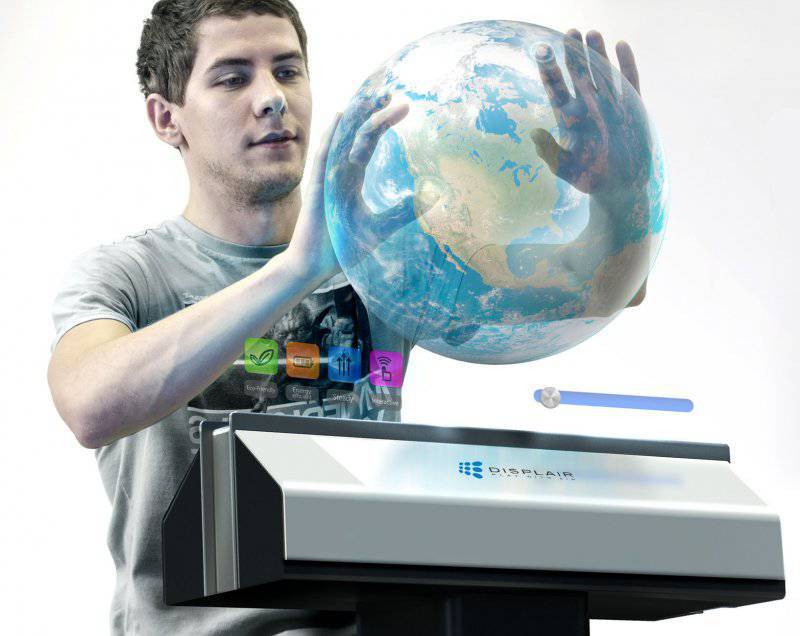 For quite a long time I was jabbing over the project "Immortality", they say the next election bike. But recently, Google on this topic and went to the site of the project "Russia 2045", clicked the first article and got out of it. Rosnano nervously smokes on the sidelines.

I really wanted to see something similar in our headquarters (hereafter kopipast):

Displair - the screen formed by the flow of the smallest particles of water from the sprayer - is not the newest development: it was first introduced in 2010 year. During this time, the project of the Astrakhan company received several million dollars of investment and moved from the experimental stage to the commercial one: in 2013, the “screens out of the fog” will start selling at the price of 398 thousand rubles apiece. Already started accepting pre-orders; The first devices should ship to customers in October.

The installation of Displair includes the screen itself (serial model diagonal - 30 inches) and the projector. The peculiarity of the system is that the user can not only look at the image, but also interact with it: the screen is equipped with a set of sensors that capture the movements of the hands. Multi-touch is supported: “display out of fog” is able to perceive several simultaneous touches at once.

The streams of drops that make up the screen are visible to the naked eye and are felt by the hand, but due to the small size of the particles, the user's fingers remain dry. For an hour of work Displair consumes one and a half liters of water. Fluid is supplied from a tank of 15 liters capacity that is part of the system.

The picture on the display - especially when viewed from afar - really looks “suspended in the air,” as the creators promise. The image, however, is shaky and indistinct: its outlines are blurred and the details are blurred. Small text, for example, is completely unreadable, and on a virtual globe (one of the demonstration applications for Displair) neither the river nor the relief details are visible.

The main application of Displair is advertising. The screen "creates a wow effect," the developers say: very few people are able to walk past a modelko hovering in the air (for example, a car) and not stop to stare and twist the picture with their fingers. In other areas, it is still difficult to use the screen due to poor detail, but in the future the device promises to be “finalized”.