April 2 2013
24
23-24 March, the rebel group Séléka captured Bangui, the capital of the Central African Republic, including the presidential palace. The leader of the group, Michelle Dzhotodiya, proclaimed President of the Central African Republic. He stated that Prime Minister Nicholas Thyangaya will remain in his post, and added that he does not rule out cooperation with other supporters of President Boziza who remain in the government. “We are not here to arrange a witch hunt,” the self-proclaimed ruler explained. He further said that in three years (not later), “free fair” elections would be held in the country, and in the meantime the rebels would abide by the terms of the peace agreement and organize these same elections.

Who is this Michelle Jotodia?

In the West, all sorts of interesting things are written about him. Notes about a person rely to a large extent on the information posted recently on the blog of an American scientist, anthropologist Louise Lombard, who lived in the CAR during the writing of her dissertation - although Jytodia himself is found in this dissertation only as a footnote.

This same footnote describes the a very ambitious person, and a "smart guy." The “smart guy” spent about 10 years in the former Soviet Union. There he married, made two children, and then returned to his homeland with "ten diplomas" in his pocket and knowledge of several languages.

According to the Cameroon Tribune, Michel was born in 1949 in the city of Vakaga. Upon returning from the USSR, Dzhotodiya was a civil servant in the Central African Republic, including the position of tax director and consul in Sudan.

In 2006, this man founded an organization called the Union of Democratic Forces for Unity. He was arrested while in exile in Benin, and then released in the 2008 year, after agreeing to participate in peace negotiations.

During the uprising in December last year, he led the rebel group "Seleka". After the peace agreement signed in January 2013, he was appointed first deputy prime minister for national defense. In the new position, he worked a few weeks. Then, the Seleka rebels resumed the attacks. As a result, 24 March, he declared himself president, which caused a sharp condemnation of the UN.

President Francois Bozize managed to escape the wrath of the rebels in the Democratic Republic of the Congo. According to some reports, then he and his two sons flew to Cameroon.

Ivan Yakovina ("Lenta.ru") with his inherent humor reminds that история in Bangui for Africa is quite typical, and yet the CAR stands out here: after all, since its independence (1960), none of its leaders have been able to leave their post of their own accord. Even the emperor, Bokassa I, was among the presidents here, who, by the way, with appetite, could have a particularly zealous political opponent at dinner.

Dzhotodiya, who studied in the USSR, does not eat people.

The Seleka Alliance, which he heads, consists of a whole series of democratic movements: the Democratic Front of the People of Central Africa, the Convention of Patriots for Justice and Peace, the Union of Democratic Forces for Unity, the Alliance for Revival and Restoration, the Patriotic Convention for the Salvation of the Country. The reason for the overthrow of President Bozize was the accusation of the government in the failure to comply with the peace agreements concluded. There were other complaints: corruption, nepotism, poverty of the people. The participants of the Séléki, seizing Bangui, staged pogroms. It must be recalled that the action unfolded in the heart of Africa, so the reader should be clear that the rebels, who were robbing the stores, pulled the fridges out first.

Having declared himself president, the leader of the Séléka suspended the constitution, dissolved parliament and dispersed the government.

“During the transition period, which will lead us to free, fair and transparent elections, I myself will pass the necessary laws,” - said he.

1 April, retained Prime Minister of the Central African Republic, Nicolas Thyangaya read out composition of the interim government. The government included 34 minister, nine of them are members of the rebel coalition "Séléka", eight - representatives of the former opposition and one - a supporter of ousted and fled from the country, the head of the CARA Francois Bozize.

The UN, of course, expressed condemnation of all this disgrace. Ban Ki-moon demanded the restoration of constitutional order in the Central African Republic, and the UN Security Council condemned in a “most decisive manner” the seizure of power by the rebels and looting. In a statement adopted following a closed meeting, says: “The members of the Security Council called for the restoration of the rule of law, constitutional order and the implementation of the Libreville agreements, which serve as the basis for the transitional period and the peaceful resolution of the crisis. They recalled that, according to the political agreement signed in Libreville, the government of national unity is responsible for the conduct of legislative elections. "

The French authorities initially also condemned the escalation of violence in the CAR and called on the parties concerned to engage in peaceful dialogue. This was stated in a short statement by the Ministry of Foreign Affairs.

However, the clever and ambitious Dzhotodiya immediately got a trump card from his sleeve.

To the French people explainedthat promises to revise contracts with China on the exploitation of local mines. In addition, he is going to buy in France a large batch weapons. Paris immediately refused to support the overthrown Boziza. 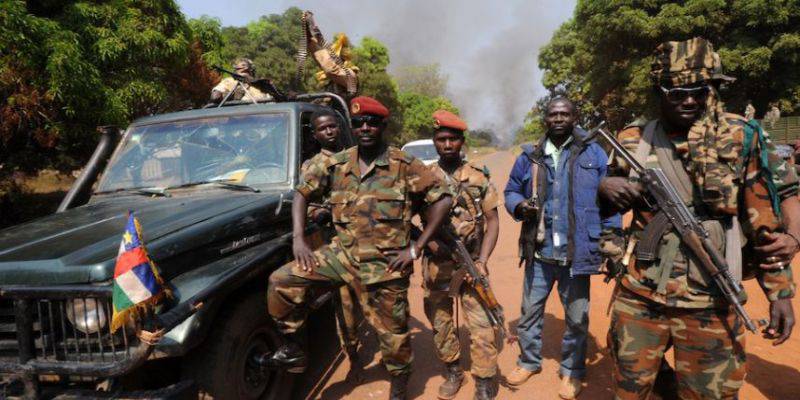 Speaking about the revision of contracts with China signed by the Bozize government, the new president said that he would invite the former colonial authorities in the CAR (i.e., the French), as well as the Americans, for the official retraining of military cadres - by the way, suffered a defeat by Seleka.

“We will rely on the assistance of the European Union in the development of this country,” said Mr. Jotodiya, adding that about 80 percent of foreign aid to the CAR came from there. “When we were sick, the European Union was at our bedside. He will not leave us now. ”

In essence, Geiste writes, Dzhotodiya is preparing to surrender the key resources of the Central Asian economy to European imperialism.

As for the situation in the CARs, it is catastrophic there. Refrigerators were taken there, but there is almost nothing to store in them. Most of the inhabitants of Bangui, reminds Geiste, there is no running water or electricity. Only one operating hospital still accepts up to 30 wounded per day. The United Nations reports that tens of thousands of people in the country lack food, and prices for basic goods (cassava and rice) have tripled.

Average life expectancy in the CARs is just over 40 years. Only 40 percent of the population here are literate. HIV infection is growing rapidly in the country.

According to the journalist, the seizure of Bangui by the rebels “Seleka” with French and American support represents the last stage in the unfolding colonization of Africa by the imperialist powers, which came to the fore after the NATO war in Libya 2011 of the year. This testifies to the reactionary nature of the policies of various bourgeois and petty-bourgeois factions in Africa, which are constantly manipulated by the imperialist powers against the background of the growing impoverishment of the workers and rural masses.

The Seleka Alliance itself (which means “union”) is a coalition of dissident factions created in September 2012 of the year. The coup d'état by the Seleka forces made the CAR a hotbed of influence between the United States, France, South Africa and China.

Today, the future course of South African military policy in the CAR remains unclear. The unnamed senior officer from Uganda said: “South Africa intends to carry out the reorganization of its forces (according to various media reports, there were between a few dozen and two hundred soldiers from the Republic of South Africa. - O. Ch.) And then to overthrow these rebels with a powerful blow. They were humiliated, and they want to repay. ”

South Africa's spokesman, Colonel Selby Moto, cautioned against this view, however, stating that South African troops are just waiting in Uganda, “they have not yet decided to strengthen or remove them”, which they are waiting for from the South African government in Pretoria.

Thierry Virkulon, a specialist in the International Crisis Group for the CARs, said: "This is a complete disaster for South Africa."

The defeat of the South African forces and the collapse of Chinese oil purchases proved provocative and especially humiliating at the height of the BRICS conference (Brazil, Russia, India, China, South Africa) in Durban. China's leader Xi Jinping said that China will "strengthen, not weaken" its activities in Africa.

Meanwhile, imperialist support for Seleka is just one component of a big strategy aimed at curbing China’s growing influence on the African continent. By 2011, China-Africa trade reached $ 166 billion, African exports to China reached $ 90 billion. During the coup, Comrade C was just touring the African continent, where he signed agreements with many resource-rich African countries.

Americans, reminds Tom Geist, responded to the coup in Bangui "gently." The United States issued a statement saying that the government of national unity, headed by Prime Minister Nicholas Tyangaya, is the “only legitimate government” of the CARs. Washington, however, did not call for the restoration of power to Bozize.

Tyangaye is a lawyer and member of the League of Human Rights (HRL), a global network of human rights defenders headquartered in Paris, operating with financial support from European governments and Washington. HRL political observers played a crucial role in organizing and promoting the imperialist agenda in Libya, Syria and other countries. Apparently, this man, writes Gajst, is a confidant of French imperialism.

Thus, it can be assumed that the French will not intervene in the conflict, and the new president will rule the CAR. In the end, nothing new in the next change of power is not there.

The CARs have significant natural resources: oil, diamonds, uranium, gold, wood and water, but this country is one of the poorest in the world. GDP per capita - 700 dollars (220-e place in the world, data for 2009 g.). The game of contrasts - the first geopolitical method. Paris and Bangui will now agree. The French need gold and other minerals, Jothodia needs the French and the EU in general. He is not going to quarrel with the USA either. Having sold himself to world imperialism, he will strengthen his power and hold out as long as necessary until the next coup, when he can, taking the treasury like Boziz, to hide in friendly neighboring countries.

Observed and translated by Oleg Chuvakin
- especially for topwar.ru
Ctrl Enter
Noticed a mistake Highlight text and press. Ctrl + Enter
We are
The poorest country in the world and its civil war. How political and economic conflicts acquired religious contentGeopolitical mosaic: The Financial Times journalist believes that Medvedev does not have Putin’s “steel taste of threat”, and Texas will demand his gold from the Fed
24 comments
Information
Dear reader, to leave comments on the publication, you must to register.