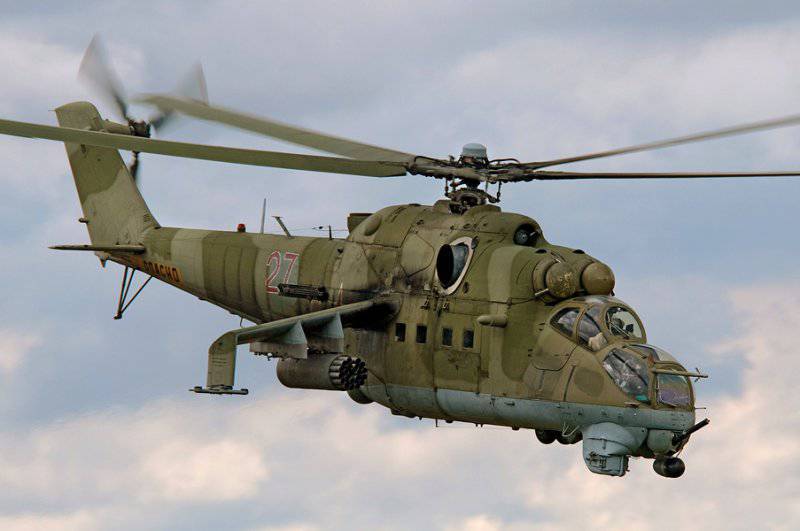 The helicopter is made according to the classic single-rotor scheme with a tail rotor. Crew members are placed separately: navigator-operator and pilot in individual cabins, flight mechanic in the cargo compartment.

The carrier system is a five-blade propeller with a diameter of 17 300 mm with hinged blades attached to the sleeve, rotating clockwise (as viewed from the top of the rotor). The shape of the blades is rectangular in plan, the relative thickness is -11,12%, the chord is 580 mm. The design of the blade is typical: extruded spar, repeating the outer contour of the contours of the nose of the blade, made of aluminum alloy, to which the tail bays with aluminum casing and honeycomb core are glued. To provide the necessary rigidity, the upper and lower flanges of the side member are inside the rib. The edges close to the toe serve as guides for the counterweight consisting of separate parts providing the necessary lateral centering of the blade.

The helicopter's transmission includes a three-stage main gearbox BP-24, a tail propeller shaft connecting the main gearbox to the gearbox and intermediate gearbox, as well as an intermediate gearbox with a tail gearbox. The tail gearbox transmits torque to the steering screw, changes the direction of rotation of the shaft and reduces its speed. The three-bladed pulling tail rotor with a mechanical change in flight pitch rotates clockwise. The range of angles of installation of the blades from -7 ° 55 'to + 20 - 25 ° - depending on the activation or deactivation of the system SPPU-52. The tail rotor blade is all-metal, with a glass-plastic cover. The diameter of the tail rotor - 3908 mm.

The power plant consists of two turboshaft engines TVZ-117В, auxiliary power unit AI-9В with a starter-generator STG-3 and a fan unit for cooling the main gearbox. The longitudinal axes of the engines are parallel to the center plane of the central part of the fuselage with an inclination forward and downward relative to the building horizontal at an angle 40 ° 30 '. On the exhaust pipes provided for the installation of the EVA. To protect the engine from sand and dust, ROMs are mounted in the engine air intakes. Engines are equipped with autonomous anti-icing, oil and starting systems. The AI-9B auxiliary power unit is located behind the main gearbox across the fuselage. 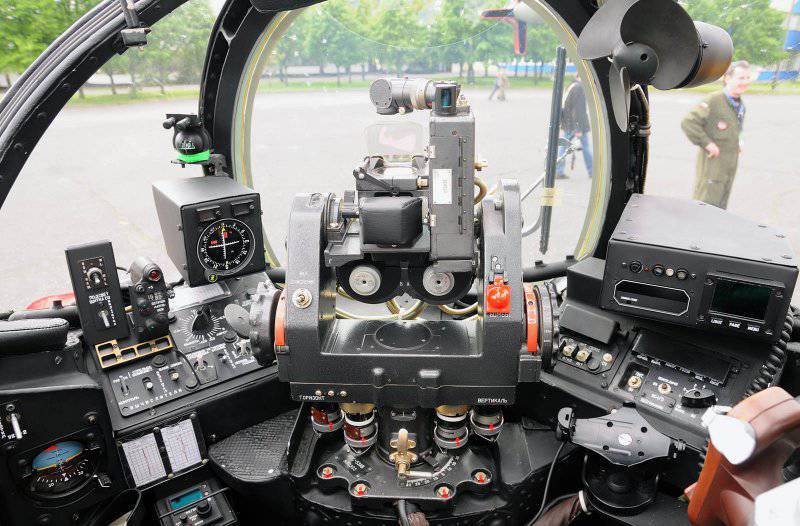 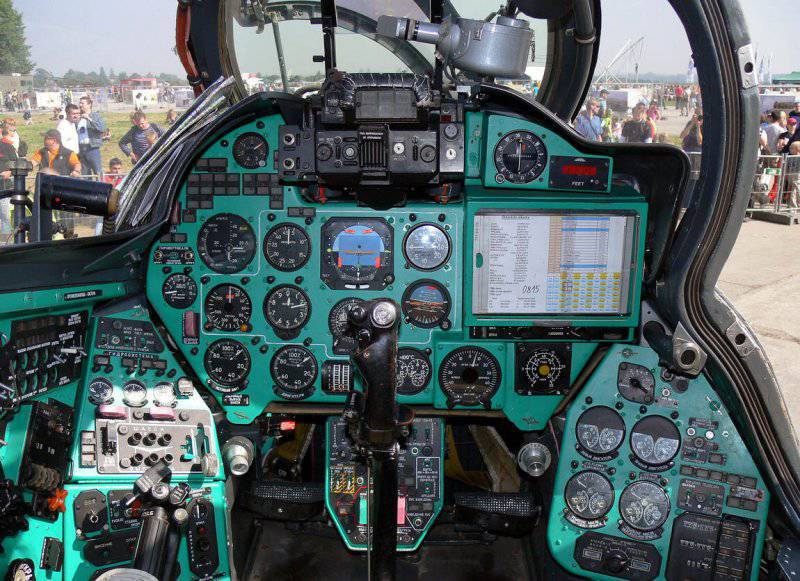 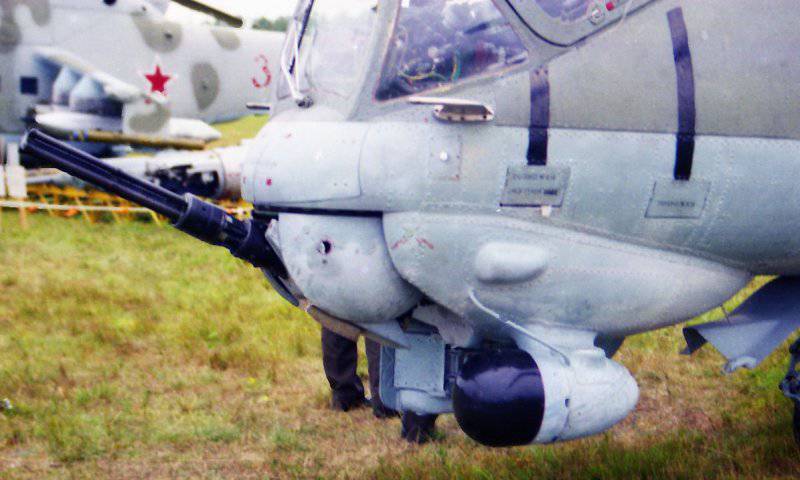 The nose of the fuselage with the installation of USPU-24 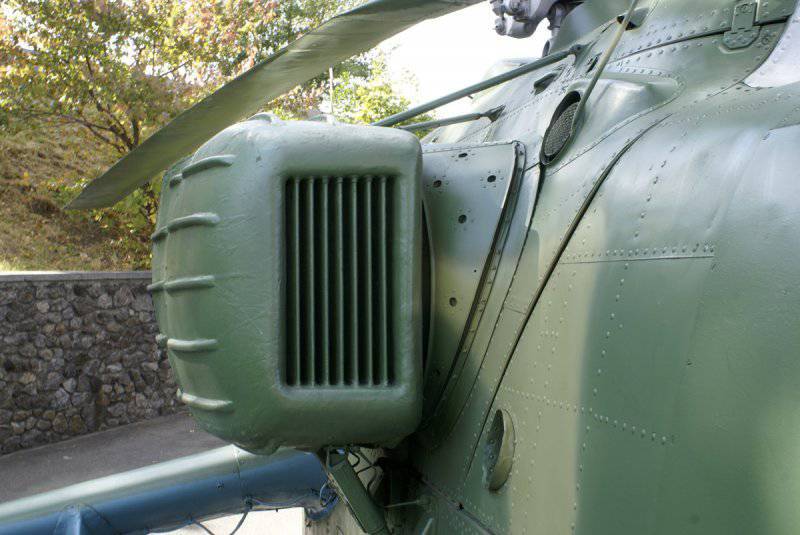 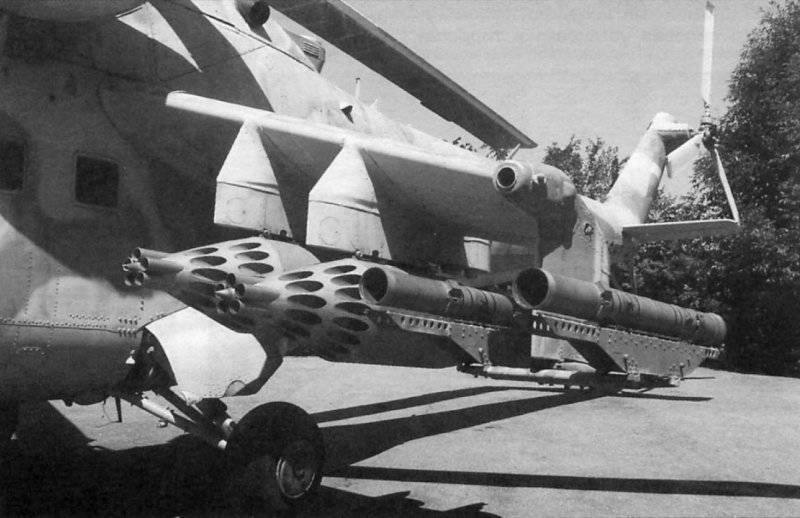 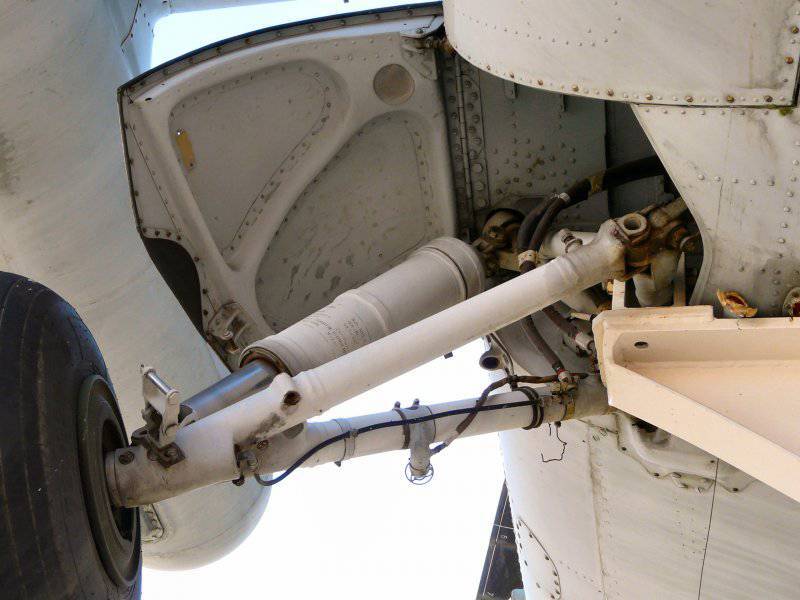 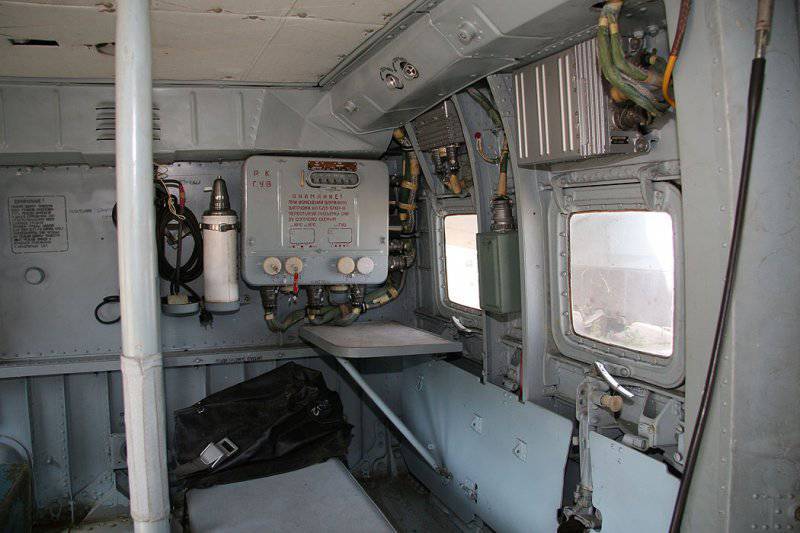 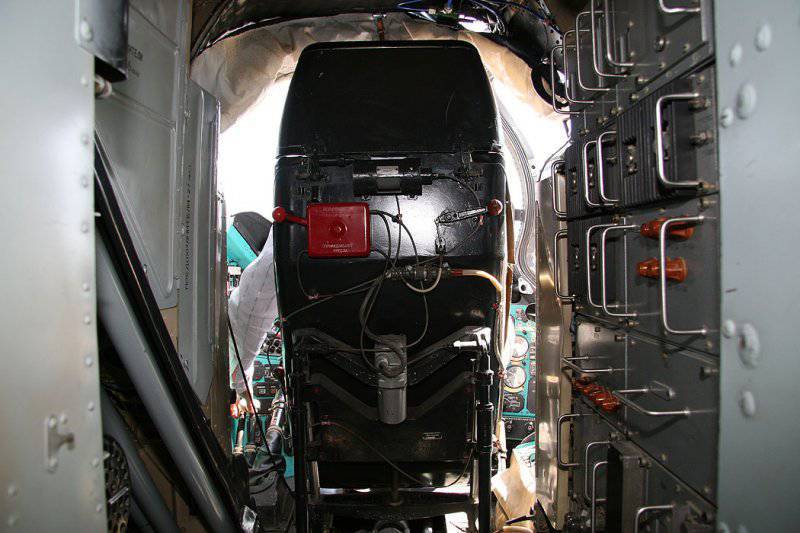 The fuel system includes five built-in tanks with a total volume of 2130 liters equipped with a neutral gas system and polyurethane foam inserts, fuel pumps, fuel lines, valves, a fuel gauge and a drainage system. Fuel - kerosene brand T-1 or TC-1. Tanks are located under the floor and in the back of the cargo compartment.

To maintain the centering of the helicopter in the process of generating fuel, the main tanks are located near the center of mass, under the floor and in the back of the cargo compartment; The order of development of fuel is regulated by automation. For long-haul flights, up to four PTB-450 fuel tanks with a capacity of 450 each are suspended under the wing.

The fuselage of the helicopter is a semi-monocoque, consisting of the nose and central parts, the tail and end beams, separated by one technological and two constructive connectors. The crew and cargo cabins are sealed and equipped with air conditioning.

The cargo compartment with four windows on each side has the following dimensions: length 2825 mm, width 1460 mm and height 1200 mm. On her right and left sides are double doors. For convenience, the upper and lower, equipped with steps, door leaves have locks open position. There are two portholes in the upper flaps. The first three portholes on both sides open inwards and are equipped with brackets for fastening small weapons landing. On both sides of the diametral plane of the helicopter, folding "seats for the landing force are installed.

Above the cargo compartment there is a compartment in which the TVZ-117В engines are located, the main gearbox, auxiliary power unit and hydropanel. A fan installation is located above TVZ-117, in front of the main gearbox. The tail beam is of oval section, semi-monocoque design. Inside it on top of the brackets fixed transmission shaft. In the lower part of the beam there is a unit DISS-15D with antennas, and on the left side there are two signal flares ESCR-46. A flashing beacon is mounted on the upper surface of the tail boom behind the VHF antenna.

The end beam consists of a one-stick controlled stabilizer and vertical tail. In the end beam are intermediate and end gears, as well as connecting the tail transmission shaft connecting them. On the output shaft of the gearbox, closed by a pylon, the steering screw is fixed. There is a safety tail support at the bottom of the horizontal part of the end beam.

Wing consoles - two-spar design, trapezoidal shape in the plan. To place weapons on each console, there are two pylons and a special beam on the bottom of the vertical ends that are bent down. In the upper front part of the left end-set installed cinema camera C-13-300-1OO-OS.

The control of the helicopter in the longitudinal, transverse and vertical directions is carried out with the help of a swashplate, the track control is controlled by a tail rotor. The slider of the automaton is connected with the stabilizer: the coordinated deviation of the latter creates the longitudinal control moment corresponding to the flight mode.

In the cockpits of the pilot and navigator-operator-torah mounted control knob, pedal and lever "step - gas." The helicopter is equipped with autopilot VUAP-1, which is part of the SAU-B24-1. In the channels of the control system in three axes and the pitch of the rotor in an irreversible pattern are included four executive control units KAU-110. The limit control angle of the SPPU-52 steering rotor blades is included in the track control channel. To protect the tail transmission shaft from overload when the pilot gave a “foot” to the pilot, the hydraulic damper SDV-BOOO-OA was installed in the track control system. The control system wiring is mostly hard. Cables are used to control the stabilizer, stop the engine, rotor brake and, in part, the tail rotor (from the main to the tail gearbox).

Pneumatic system - balloon type. The cylinders used are internal cavities of the main landing gear and a reserve cylinder located in the compartment of the power plant.

Flight navigation equipment includes ARK-15М and ARK-U2 radio stations with a P-852 receiver, a Doppler velocity and demolition meter Diss-15D, a radio altimeter A-037, and flight instruments in the pilot’s cabin. The special equipment includes the identification system “yours is alien” SRO-2, the radiation indicator of the L-006 radar “Birch”, the speech informant RI-65, the device for interfering with rockets with the GOS CO-EP-V1А “Lipa” installed on top of the fuselage in front of the tail boom and ASO-2В units along the sides behind the wing.

The life support system includes air conditioning and an oxygen system for flying at altitudes above 3 km. The armament consists of built-in shooting-cannon and hanging. The first is the installation of USPU-24 with a YakB-12,7 machine gun with 1470 ammunition ammunition. The machine gun is operated by the navigator-operator with the help of the KPS-53AB sight station with the KS-53 collimator sight. Suspended weapons include guided and unguided weapons. Unmanaged include NAR, bombs, incendiary tanks and containers KMGU-2. Shooting the NAR and from the firing-cannon containers is carried out by the pilot using the automatic sight АСП-17В, which is also used for firing from the machine gun YakB-12,7 fixed parallel to the longitudinal axis of the fuselage. The PUS 36-71 firing control equipment allows production of four, eight and 16 rockets from each block.

Guided weapons include ATGW "Sturm-V". The eight 9М114 ATGMs are placed on APU-8 / 4-U mounted on wingtips and external pylons. Aiming is carried out by the navigator-operator, and targeting by the equipment of the RCCH in semi-automatic mode.