URSN - the company that became a legend 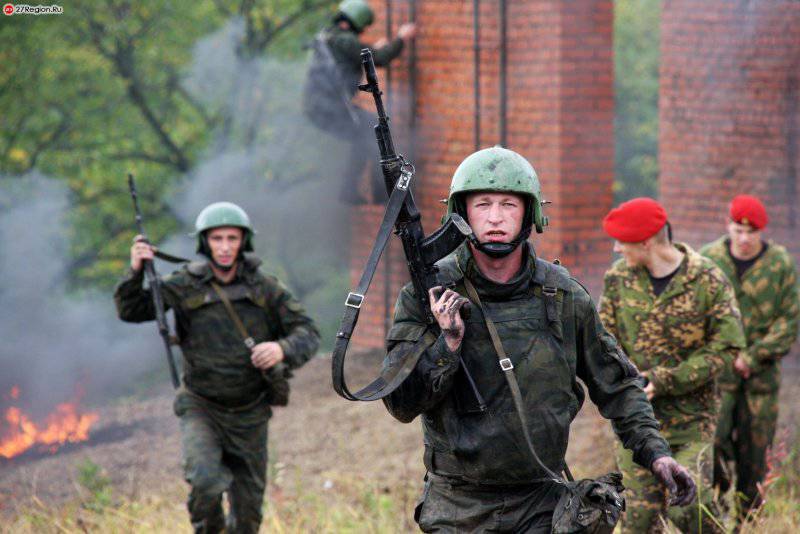 For the first time, the need to create special units that would be able to fight terrorists at the highest professional level was seriously talked about before the Olympic Games in Moscow in 1980. In the system of the Ministry of the Interior at that time there were no structures that would be staffed by conscripts and who could perform special combat missions. Therefore, it was decided to create special forces in the Ministry of Internal Affairs. It happened at the end of December 1977. December 29 appeared the order of the Minister of Internal Affairs of the Soviet Union, according to which the process of forming a special unit, which today is known as Vityaz, was launched on the basis of the ninth company of the third battalion of the second regiment named after F. Dzerzhinsky. Vladimir Aleksandrovich Maltsev, who had good general physical training, several sports classes, and besides, had good military training, became the head of the special forces.

Before starting the formation of such a serious unit, first of all it was necessary to study the experience of their colleagues. Therefore, a trip was made to the Tula airborne division, to the reconnaissance company. The group consisted of A.Sidorov (deputy head of the armed forces who supervised the creation of a training company), E.Maltsev (deputy division commander), V.Hardikov (sambo trainer), N.Koreshkov (head of combat training of the division) and V.Maltsev . The task of the group was to familiarize themselves with the objectives of the subunit, to study the training program for personnel in order to be able to continue to use the achievements of the airborne assault forces in training the fighters of the new unit. By the way, the chief of the armed forces, General Yakovlev, also traveled abroad to familiarize himself with the experience of the Finnish special forces - the Medved group, and in addition, the experience of the American Delta and the German GHA-9 was studied.

Seen in Tula was largely unknown, new. But since there was no point and no need to copy the full experience of the paratroopers (after all, the new company was tasked with ensuring security during the Olympics), then the training and selection programs differed from each other. In addition, one of the goals of creating a new unit was the development of training programs for the training of special units in the system of the Ministry of Internal Affairs, as well as the successful struggle against highly dangerous criminals. In many ways, this is why the choice fell on the ninth company. The fact is that in terms of physical fitness, her fighters exceeded not only regimental units, but also divisions as a whole. In essence, this company was a sports unit that served as a reserve for Dynamo society.

The selection in URSN was very tough. When selecting fighters had to pass the standards for physical training, testing and interviews. Thus, in the selection process, the commission looked not only at physical training, but also at the overall level of development of the applicant. Therefore, only two were selected from the planned three platoons. At first, none of them had a commander, despite the fact that the sergeant was strong enough. Then officers began to appear in the company.

From the very beginning of the formation of the company, the main task was left - to prepare the fighters to demonstrate to the Minister of the Interior the possibilities of such a unit, because the whole team of the company was out of state. And only on how successful the demonstration of skills will be, the subsequent fate of the special forces depended.

It should be noted that there were enough problems in creating a new division. These were problems with the equipment of personnel, and with the creation of material training. There were questions about the organization of food, because so intense daily physical activity took all the forces, and that ration, which was intended for the personnel of the combined-arms units, was clearly not enough. Therefore, we had to prove and persuade, and even sometimes cheat, but the command went to all this just to ensure that the soldiers were provided with everything necessary.

In the second platoon a group was formed, in front of which a task was defined - to prepare in the gym for the show to the representatives of the Ministry of the Interior. The group included only those military personnel who had excellent physical training (gymnasts, acrobats, wrestlers, boxers). The third platoon also included military personnel who had good physical training but were distinguished by professional skills in handling weapons, because it was supposed to prepare it as a firing unit. The first platoon initially performed the tasks assigned to it by the command of the second platoon, and was a support unit.

Each unit consisted of the order of 20 fighters. The armament is regular, regular, except that the second platoon had light body armor, self-made throwing knives, and the third platoon, in addition to standard weapons, had two AKM assault rifles and silent firing devices. For demonstration classes the novelty of that time AK-74 was used.

It was here, as a headdress, first appeared maroon beret - a source of special pride and an indicator of real professionalism. In the spring of 1978 of the year, according to the order of Lieutenant-General Sidorov, deputy chief of the Interior Troops of the Ministry of Internal Affairs, 50 berets were delivered to the unit, half of which were green and the second half were spotted. The uniform was the same as that of the other servicemen, with the exception of the second platoon, which had the uniform intended for staying in a hot climate. This form differed from the usual straight cut of trousers with buckles at the ankles and the presence of shoes. By the way, only those fighters who successfully passed all tests had the right to wear a krapovo beret.

At the first stage of creating a training company, a program was created that provided for the actions of special forces in various emergency situations, in particular, in the case of hostage taking in an airplane or ground transportation. As for the training of servicemen, they tried to take into account the smallest nuances: training on a fiery assault strip, in the gym, training snipers and grenade throwers, training endurance and psychological stability. At the same time, not only the personal experience of the creators was very useful, but also the developments of special units of the Airborne Forces and the KGB.

Each fighter learned to deal with different types of small arms, which were in service with a company: an assault rifle, a grenade launcher, a sniper rifle, a pistol, even though the sniper training was carried out according to a separate, clearly defined plan. The daily routine was designed in such a way that all the fighters would study for six hours, and then spend a few more hours on self-training.

And now 9 March 1978 of the year appeared the order of the chief of the internal troops of the Ministry of Internal Affairs of the Soviet Union, according to which a special purpose training company was formed on the basis of the 9 company, and its staff was determined.

For the time period 1970-1980-ies, the URSN was the only special unit of the Internal Troops of the Ministry of Internal Affairs of the Soviet Union. And only this unit carried out the tasks of freeing the hostages, the seized vehicles, the arrest or liquidation of especially dangerous armed criminals.

It should also be noted that it was in the training company that all the traditions of the Soviet special forces of the internal forces originated, and this company became the basis for the formation of new special forces units in the future. When the company was reorganized into a battalion, on its basis was created the first special forces, which was called "Vityaz".

Thanks to intensive training, the company successfully coped with the tasks assigned to it during the Moscow Olympics. But even before it began, the unit fighters had to demonstrate their skills in practice. Thus, in 1978, the URSN, on a “Gather” signal, was taken to Domodedovo Airport, where the Tu-104 crash occurred (Moscow-Odessa flight). The men of the company cordoned off the crash site, helped in the search for a “black box”. In July, 1980, the special forces had to travel to Sheremetyevo Airport. There was practically no information then, no one really understood what had happened. According to some data, it was known that a plane was hijacked. However, this time the participation of fighters of the training company was not needed. However, this was a kind of psychological preparation for personnel.

After that, in subsequent years, the special forces repeatedly took an active part in a large number of special operations: they released school-held hostages in Sarapul in Udmurtia in 1981, ensured the suppression of riots in Ordzhonikidze in October 1981, provided protection to investigators of the General Prosecutor’s Office who were engaged in the so-called “ Uzbek case "in 1984 year. Together with the KGB unit of group "A" in 1986, they took part in an operation aimed at apprehending the criminals who captured the plane in Ufa. In July, 1988, the URSN fighters conducted an operation to unblock the Zvartnots airport of Yerevan, which was seized by terrorists who were trying to prevent the arrival of airplanes with OMSDON fighters. A few months later, in the same year, the special units of the unit secured the building of the Ministry of Internal Affairs of Armenia, in May 1989 of the year - an operation to free the hostages who were captured in the Perm region in the remand prison of Kizel and in the Kirov region in the corrective labor colony of the village of Lesnoy .

Further activities of the special unit was not less intense. In the second half of 1988, the company’s fighters held special events aimed at curbing the activities of criminal groups in Nagorno-Karabakh and in Baku. The following year, a conflict began between Meskhetian Turks and Uzbek extremists in the Fergana Valley. Thanks to the skillful and well-coordinated actions of the fighters of the company, it was possible to save the lives of civilians, prevent a large number of crimes, arrest the perpetrators of the riots, seize large arsenals of weapons, eliminate the criminal groups that were preparing the attacks.

Then, in 1990, in the city of Sukhumi, in a temporary detention center, several prisoners who were sentenced to death, took prisoners of the staff of the institution, opened cameras, seized weapons and demanded transportation. A special operation to free the hostages was carried out by the joint forces of Alpha and URSN. As a result, the operation was carried out successfully, the organizers of the rebellion were liquidated, the hostages were not injured.

The events of recent years have demonstrated to the top leadership of the Ministry of the Interior that there is a need to increase the organizational structure of the special forces of the Internal Troops. As a result, in 1989, the special purpose training company was reorganized into a battalion, on the basis of which the creation of the special unit Vityaz began in May 1991. Over time, other special units were created within the Ministry of Internal Affairs, but it is the day the training company was created that can be considered the birthday of the entire Russian military special forces of the Ministry of Internal Affairs.

Ctrl Enter
Noticed oshЫbku Highlight text and press. Ctrl + Enter
We are
The path of "Vityaz"Vityaz Special Forces: professionalism multiplied by courage
52 comments
Information
Dear reader, to leave comments on the publication, you must to register.