Russian paratroopers can still surprise: an airmobile church was landed near Ryazan

April 1 2013
119
On Thursday, March 28, in the course of a battalion tactical exercise held near Ryazan with the landing of military equipment and personnel of one of the paratroop battalions of the Tula unit of the Airborne Forces from the military transport aircraft Il-76, the regimental mobile temple was landed. It is worth noting that this landing was carried out for the first time, which the Russian military are still ready to surprise the public. Simultaneously with the temple, the paratrooper military priests landed, who landed after the parachute platform with cargo from the collapsible structures of the mobile church, in order to start assembling it directly at the landing site.


For the first time, the military and representatives of the church began to talk about the development of a landing Orthodox church for the Airborne Forces in March 2012. Then the Russian Ministry of Defense made a statement about the proposal from the ROC for the development of airmobile churches. As a result, less than a year later, in February 2013, the mobile temple was presented to the public and the military, made on the basis of the KamAZ truck. 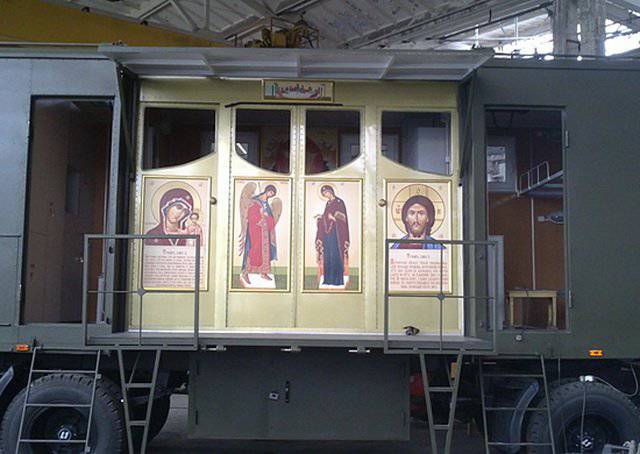 Also in February, on the territory of the Church of the Annunciation of the Most Holy Theotokos, which is located at the headquarters of the Airborne Forces, the paratroopers studied the capabilities and tactical and technical characteristics of a mobile landing Orthodox church on the chassis of the KamAZ vehicle. Classes, which were attended by cadets RVVDKU - Ryazan Higher Airborne Command School, undergoing training in existing military units, included both practical and theoretical part. The practical part involved the phased installation of elements of a mobile church under the leadership of the clergy.

According to the head of the class, Father Andrei, the paratroopers love speed and pressure - the speed of deployment and collapse of the airmobile Orthodox church is only 5-6 minutes. The airmobile church itself consists of 2 parts: a trailer with a life support module and a tent with special unbreakable church utensils, including icons, an altar and other items necessary for the administration of worship. All church utensils before landing are wrapped in foam rubber, so that nothing is damaged during the landing. At the same time, the icons in the airmobile church also meet the specifics of use: they are made from special banner fabric.

The landing of the temple is carried out using the standard parachute platform “П-7” adopted by the Russian army, which is used for landing of the airborne troops. Before landing on this platform are loaded all the elements of a collapsible design, placed in special boxes. The life-support module itself, in addition to a sufficiently powerful diesel generator on 6 kW, includes an air conditioner and a refrigerator. In addition, a set of sound-amplifying and multimedia equipment is included in the airmobile church. 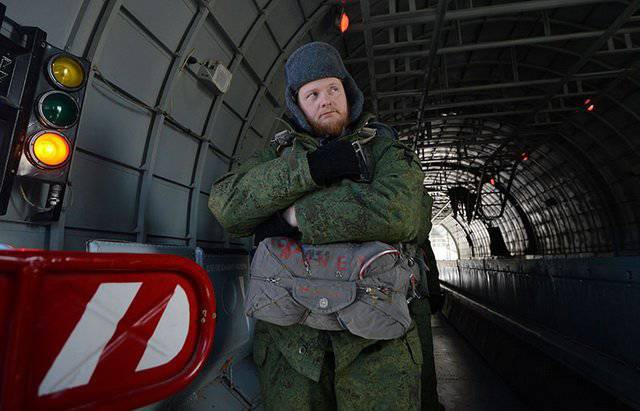 In the field, such a temple is served by 6 people: a priest, a sexton, a deacon, and 3 choristers. The main purpose of the airmobile church is to provide worship to the paratroopers of the Orthodox faith directly at the site of the exercise or in the area of ​​the alleged military conflict. Previously, the mobile church has already managed to pass successful tests on the exercises of the Airborne Forces, which were held in Novorossiysk, Tula and Ulyanovsk.

Representatives of the Ministries of Defense of the Russian Federation explained that every year more and more recruits who consider themselves to be believers and profess Orthodoxy enter the army. In such circumstances, the opportunity to pray and take communion, the presence of a priest is becoming increasingly important. The chief priest of the Airborne Forces believes that the need for a temple in military units meets the specifics of religion.

According to the spokesman for the Airborne Forces Colonel Alexander Kucherenko, on Wednesday parachutes jumped with parachutes, and on Thursday for the first time stories the airborne forces successfully landed an airmobile temple. “On Wednesday, the priests made 2 training parachute jumps from the An-2 plane, and on Thursday an airmobile church was successfully parachuted from the IL-76, and the chaplains also landed from it,” Kurchenko said. On the ground, the priests, together with the paratroopers quickly assembled the temple. 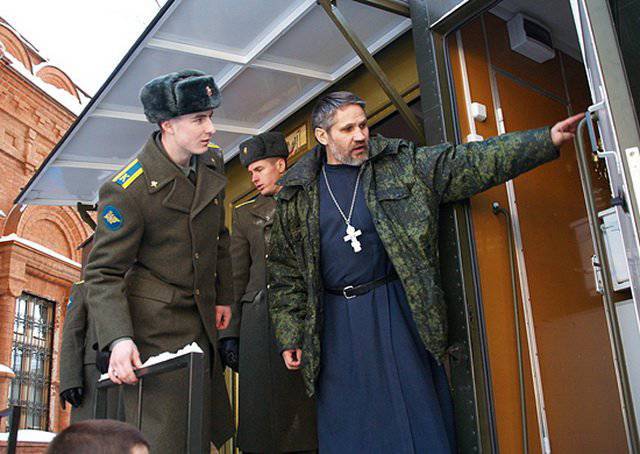 In the airborne troops they noted that the deployment of the airmobile church after the landing took place according to standard regulations. The paratroopers took no more than 5-7 minutes to do this. According to Aleksandr Kurchenko, the workplace of chaplain paratroopers has quite impressive dimensions: the dimensions of the 8 tent on 20 meters. Priest Mikhail Vasilyev, who is the head of the airborne unit in the Synodal Department of the Russian Orthodox Church for interaction with the army and law enforcement agencies, told the newspaper Gazeta.Ru that 10 priests of the Russian Orthodox Church regularly parachute. According to him, this is a peculiar form to get to his flock, which consists of paratroopers. Often, the paratroopers find themselves in places where Makar did not drive calves, and priests need ways to get to these places, Father Mikhail said.

According to him, the chaplains serve for the army, helping servicemen to find meaning in the dangerous and difficult task of serving the army and the Fatherland. Priest Mikhail Vasilyev notes the fact that there were churches and chaplains in the Russian army before the 1917 revolution, and Colonel Aleksandr Kurchenko said that the need for priests in the army only grows over the years. According to him, according to statistics, the number of believers among recruits comes to 90%.

Currently, in addition to the Orthodox in the ranks of our army, there are representatives of other faiths, but, according to the priest, Muslims or Jews have no urgent need for a temple: “For Muslims and Jews, the temple is not so important, since they can pray at any place , for this they need only a mat. At the same time, the Orthodox need a bunch of specific items to perform the sacraments of the church and require it. This is the specificity of religion. ” 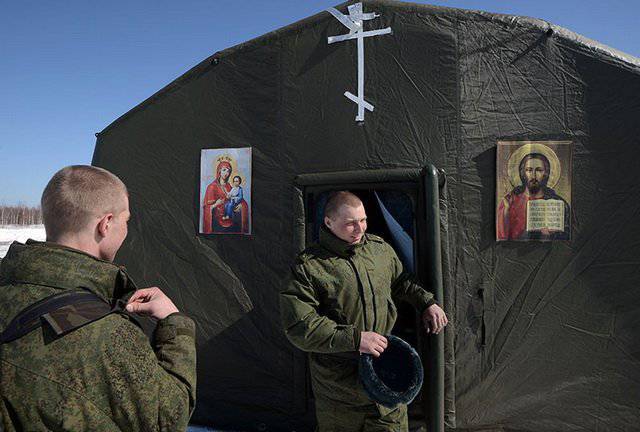 According to Archpriest Father Mikhail Vasilyev, today, because of the very tight combat training schedule, paratroopers during their service almost do not happen in places of their permanent deployment, and, accordingly, they do not have the opportunity to visit the stationary regimental chapels and temples. In this case, they will come to the aid of the airmobile temple. Currently, military units of the Airborne Forces have 10 functioning Orthodox military churches, which are located on the territory of military camps. Today, the service for the spiritual nourishment of paratroopers is carried out by 8 Orthodox military priests. At the same time, as part of an experiment in the Ulyanovsk airborne unit, a prayer room was also created for Russian military Muslims.

Ctrl Enter
Noticed a mistake Highlight text and press. Ctrl + Enter
We are
"Where hell ends, the Airborne Forces begin." Side view of the airborne troopsThe Ministry of Defense is starting to eliminate the Airborne Forces
119 comments
Information
Dear reader, to leave comments on the publication, you must to register.