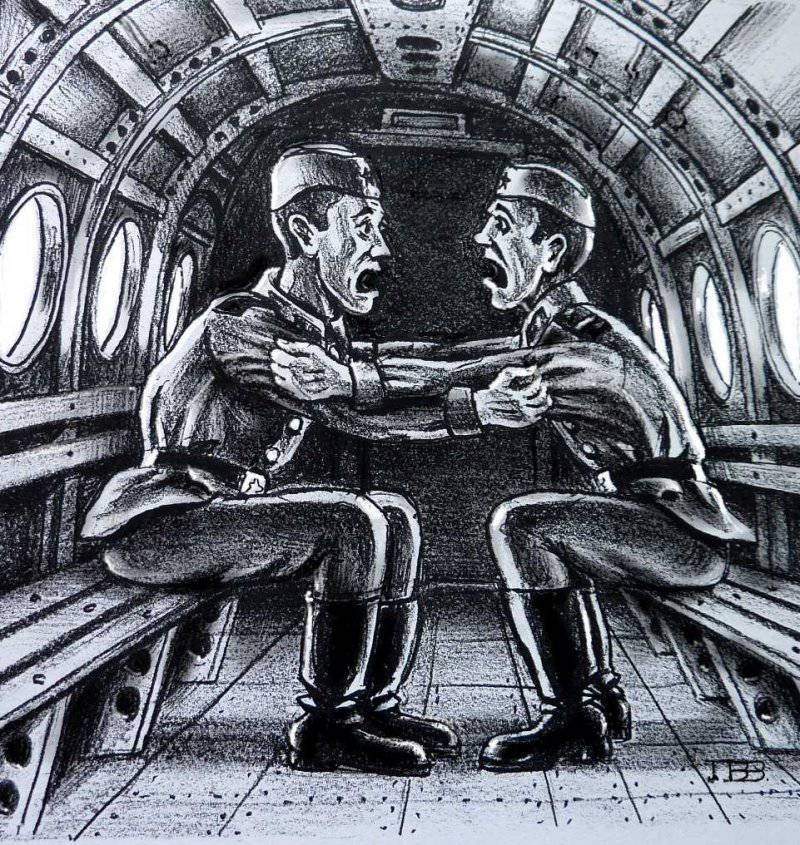 - Ryzhov, yoshkin cat, what do you think, in vain they gave the corporal and awarded the commemorative medal? You hooked like a hook, freak? - indignant ensign Vasilevich.

And it was what. A new engine, which should have been installed on a helicopter, instead of the old one that has spent its lifespan, jumped off one of the hooks of the lift, stuck in the grass, turning out a piece of fat turf.

- Everything, Ryzhov, ditched the engine, now instead of a vacation you will go to the debat, and I will be crushed into the ranks. Eat your not klesh! - swore prapor.

The corporal Ryzhov with private Belov quickly hooked on the motor and, lifting it up, began to clear the grass and the ground. Vasilevich, on the other hand, was intently examining the components and assemblies of the engine, tugging something, staggering. Then, being satisfied with the inspection, he said:
- In my opinion, everything is fine. Lucky for us - nothing fell off! Just let us agree, fighters, not a word to anyone about this incident, if they find out - we have a pipe. Bracket?
The soldiers affirmatively nodded their heads.

It took several days to install the power unit on the helicopter. They screwed the engine to the frame, then attached the pipelines, wiring, control mechanisms, gearbox. Then came the crucial moment - the first launch.

Aircraft, standing on ladders, conjured over a complex unit, and private Belov was in the wings and was at the time of launch near the helicopter. When the engine began to grow, Ivan suddenly noticed that puffs of thick black smoke fell from it. From surprise, he rushed to run away, waiting for the explosion, but then he saw that everyone remained in their places, no one was running, and he also stopped.

- Everything! - I thought the private - the engine Kapets! That he was so puffed up by the fact that we slammed him. Now they will start to understand and take us all for an ass.
But as the engine worked, the smoke became lighter and more transparent and soon disappeared altogether, no explosion followed.

- Why are you pulled it when puffed? - Ryzhov asked with a sneer, - I suppose, sdreyfil, son? Yes, new engines always smoke like that at the beginning, when they are started for the first time, he explained, “there the preservative grease that covers the parts burns. Hooked up?
- Got it, - muttered Ivan.
Then the engine drove for a long time on the ground. And one of the days came the turn of his checking in the air.

In the morning, having completed the pre-flight training, Belov and Ryzhov sat on a box near the helicopter in anticipation of the appearance of the crew.
- Imagine, Belok, soon a demobilization, I flew a year and a half ... with a rag around the helicopter, but for the present I never took off into the air. And in general, in my life I have never flown anything - it’s called “served in aviation". I’ll return to my village, tell them whom they will not believe!
- Che, right? Wow! And I once flew a “citizen”, on the passenger An-24. I did not have to fly a helicopter. And what, you never asked the pilots to take you with you on the flight? - Ivan asked.
- requested. Yes, just always refused. Then the administration flies with them - it’s impossible, then they fly somewhere for a long time. And then, in general, it is not supposed to take on board outsiders.
- Well, no shit myself, found a stranger! Yes, how much sweat you spilled because of this turntable, as Papa Carlo plowed on it in the heat and cold ...
“Yes, that's the point, it's a shame even,” said the corporal sullenly.
“Listen,” suggested Ivan, “but let's ask the pilots, maybe something will work out — this time the bosses will not, they will not fly far, they will circle around the airfield.”
- What are you crazy? Quite the contrary, today they certainly will not take it, the flight is a test one, ”Ryzhov explained.
- And I still ask, they won't let you in the forehead. Listen, Ryzhov, but with women you have the same way as with flights - did you see, but did not fly? - Ivan suddenly asked.
“Well, you are a fool, damn it, you give it,” Ryzhov protested. “You ask such an old man!” Is that a joke? Here the young brazen went! Am I supposed to report to you?
- No, I just asked that, sort of on the topic.
“Wow, compared horseradish to a finger,” Ryzhov did not calm down.
- If you do not want, do not tell. There was nothing, it means there was nothing, - Ivan did not stop telling him.
- Well, you got me, Squirrel. Why do you want me to take up your upbringing?
- No, Yur, why are you boiling? Just sitting here, waiting, boring ... Take and tell that you feel sorry for what? And then I will remember something.
- Well, okay, persuaded, then listen.

And Ryzhov told Belov history my first love.
Everything happened when he was still a boy of fifteen. They had a cool chemist in a rural school. Young, beautiful, but married. True, her husband served in Morflot and for this reason the very first guys in the village constantly pasted to a lonely teacher. But she did not give anyone the slightest reason to doubt her loyalty to her husband.
But, you see, nature took her own and in order to somehow satisfy her considerable sexual needs, she, at the risk of her later life, developed a bold plan of action.

Khimichka, as her lover, chose an inconspicuous, lanky schoolboy Yurk Ryzhov, who in these matters was a complete zero. Nobody could imagine such a thing, that there is this connection between a teacher and a schoolboy. And since no one knows, then the husband will not know either.
And in Yurka she was not mistaken - he was silent as a partisan, realizing that publicity could ruin the career and family of his beloved teacher, and this would automatically lead to a break in their relationship, which he didn’t want at all.
In short, such a mutually beneficial love union was formed. They behaved like scouts behind enemy lines. And the danger of being caught at the scene of a crime only strengthened their passion. After all, who does not risk, he, as you know, does not drink champagne!

Ivan Ryzhov described in detail the very moment of his seduction. As she once, having stayed with him alone at school after lessons for additional classes, she tried to explain to him, a stupid, un-kissed youngster, that, in fact, she needed him. And how he, a chump insensible, could not believe what was happening and respond adequately to what was happening. But then his favorite subject was chemistry, which he had hated so fiercely.

Yuri turned out to be a capable student. Ryzhov, with special gusto, painted Belov, how he and the teacher were engaged in chemistry among flasks and test tubes, in the gym on the mats, in the assembly hall on the piano keyboard and even in the teachers' room on the table of the head teacher of the school.

So, no wonder Ivan called his friend to be frank, that was something to tell.
And this love story is over very simple. The chemist's husband returned from the army. And she instantly broke off all chemical bonds with Yuri. He was very upset, after all the first love, but, as they say, everything is good, that ends well ...

But Ivan did not have time to say a word, as members of the helicopter crew headed by Captain Melnik approached them.
Belov immediately jumped up from the box and rushed to the commander:
- Comrade captain, let me turn?
And having received good, he told him about Corporal Ryzhov.
The pilot was also surprised a lot when he learned that the aircraft mechanic who has served their helicopter for almost a year and a half has never been in the air. Then, having thought it over for a second, he waved his hand invitingly and said:
- Sit in a helicopter.
- Ivan pulled Ryzhov behind him and they flew like a fly, happy, on board the helicopter.

The engine buzzed. In the windows long blades flashed. The helicopter got up and ran lightly down the taxi to the launch site on the runway. Reaching this point, he stopped for a moment, then the motor roared and the furiously rotating screw easily pulled the heavy body of a green huge dragonfly up behind it.

Passengers stared into the portholes on the ground receding from them.
The weather on this day was excellent. The sun was shining brightly. At the bottom, colorful rectangles of fields stretched in a giant mosaic, curled up with green curls of the forest, a silver river coiled like a snake, and in some places white settlements of houses were grouped together. All this was drawn up and down the circulatory system of roads and highways.

The helicopter went in circles, rising higher and higher into the blue sky.
“Look, this is our airfield,” Ryzhov cried out in admiration.
The multi-kilometer runway looked from above on top of a narrow light stripe that fit into the porthole, along the edges of it tiny silver arrows of the aircraft were located.
- Wow, beautiful - then what! - exclaimed Ivan.
- Yes, great! - shouted through the noise of the engine Ryzhov.

The rotorcraft, meanwhile, screwing into the sky, was increasingly removed from the earth. Rare clouds and those remained somewhere below.
Suddenly the engine stopped. The calm confident rumble of the engine was replaced by the frightening hissing of air currents flowing around the plating of the falling machine.
The delight and joy of flying in the eyes of our passengers instantly gave way to fear and horror!
The helicopter rushed to the ground like a stone, the engine was silent!
The soldiers clung to each other with their hands and the most terrible thoughts flashed into their heads, but one was common:
- The engine failed due to their fault, they dropped it - for this they and punishment.
Our aviators had already mentally said goodbye to life, when suddenly a sweet singing touched their ears - the engine came to life!
- Hooray!
When, after landing, they finally jumped out of a helicopter, their joy knew no bounds, joy not from the flight, but from the fact that such a dear, unshakable and reliable earthly stronghold was again under their feet, that they were alive and that everything was so good is over. They were ready to kiss the ground.

- So we flew, - said Ryzhov.
“Yes ...” Ivan echoed him meaningfully.
- Well, you and perebzdel, Protein, even stronger than just now because of the smoke!
“Yes, you would have looked at yourself, hero,” Ivan replied with an insult in his voice, “he clutched at me with his claws, his eyes already poured six kopeks out of fear!

At that moment the commander of the crew appeared from the helicopter, and our brave warriors rushed to him with questions:
- What happened, comrade captain, why did the engine stall?
- Nothing happened, the pilot answered, - we, when we fly around the engine, we always deafen it according to the instructions, and then we check how it starts up in the air.

- And if it does not start? - Ivan asked.
- And it will not start, so we will make a soft landing in autorotation mode. Any questions?
“No, no,” Belov said in a military manner.
- Yes ... That's how the captain pinned us! - Ryzhov mumbled insult in his voice and, having animated, said:
- But now I will remember my first flight for the rest of my life!

Ctrl Enter
Noticed a mistake Highlight text and press. Ctrl + Enter
We are
My grandfather's front-line letters (part 2)The hunt for the Blackbird
6 comments
Information
Dear reader, to leave comments on the publication, you must to register.