Why "Uzbekistan after Karimov" will inevitably explode 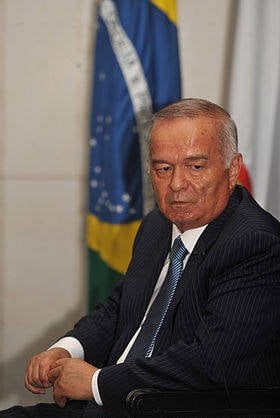 From Uzbekistan heard newsthat President Islam Karimov slept with a heart attack. True or not, it is not clear, for it is impossible to understand what is really happening in Tashkent and in the mandated territory.


In the informational sense, Uzbekistan has long been turned into a black hole in Central Asia, the best news of which is only the volume of currency transfers from migrants from Russia and Kazakhstan. (At the same time, Uzbekistan is the largest Central Asian state in terms of population, almost of the Ukrainian weight category).

We cannot know what is really happening with Islam Karimov. But in any case, he will have 75 years and, despite all the wonders of medicine of the XXI century, in the very near future we will see a political crisis in Tashkent. Because a change of power is always a crisis. Suffice it to recall Moscow-1993, Tbilisi-2003, Kiev-2004, Bishkek-2005.

Therefore, Uzbekistan inevitably expects the cruelest scrapping. Moreover, the main risks are contained not in how exactly the “successor” special operation will be carried out or failed, but in the fact that the society that Islam Karimov built for the 22 of the year in Uzbekistan cannot but explode.

“Sociology, of course, is pseudoscience, but I don’t have anything better for you” is a common joke of a post-Soviet political consultant who has faced the typical reaction of a typical elitist to objective political reality.

We do not know the society in which we live. And if in Russia there are still sociologists who really monitor the situation in society systematically and for decades, in other national fragments of the empire, sociology has long been turned into a branch of election manipulations and disinformation.

"Citizens of Uzbekistan are looking into the future with great optimism, positively assessing the planned deepening of reforms in all areas in 2013 year ...",

I doubt that in Eurasia there is a state where 90% of residents believe that life is beautiful. Not sure that there is such a state in Europe or North America. Maybe this picture was observed in some small island offshore at the peak of financial speculation in 2007-2008. Moreover, my doubts have a purely professional basis - I happened to conduct and order hundreds of sociological polls of different sampling depths, built on different methods and conducted in different parts of Eurasia from Lviv to Irkutsk. It was not necessary to spend in Uzbekistan, but take my word for it - 90% support for the party and the government does not exist.

It is clear that the picture that Tashkent sociologists draw to the Tashkent authorities has nothing to do with reality. For no other purpose than to appease Islam Karimov does not seem to exist for Uzbek sociologists.

It is interesting to compare the data of the official Tashkent opinion poll with research among labor migrants from Central Asia in Moscow.

So, the families of the migrants interviewed in 75% of cases stayed at home, 73% of newcomers send money home.

The question arises: if 90% of citizens living in Uzbekistan are satisfied with the situation, then why do people leave there? And why do the overwhelming majority of those who left, who are forced to live in not the best conditions, work hard and still feed their families, feel happy in a strange and cold Moscow? Nekladushku.

The answer lies on the surface: a society built in Uzbekistan does not imply veracity at the concept level. The ugliness of the neo-feudal model, about the risk of a slide into which Kazakhstan was told by our Eurasian comrade from Astana, has been formed in Uzbekistan for a very long time. But the worst thing is that no one truly knows what kind of society is built and what risks it contains.

According to the official doctrine of Independent Uzbekistan, which painfully resembles the other versions of post-Soviet nationalism, in 1991, the state broke free from totalitarian, inhuman oppression. Retelling the details of the Uzbek national concept does not make much sense, because it is no different from the Moldovan, Georgian, Ukrainian, and even the Russian national version, except for the names and surnames of national heroes.

It’s just that in the Uzbek version the thesis about oppression sounds particularly funny, considering that among Uzbeks in 1897, the literacy rate was 4% of the population, and by 1989, 99%. It is also fun to read news from Tashkent about the banning of Santa Claus and Snow Maiden on children's matinees and chapters from a school textbook, where the artist Vereshchagin personally shoots the captured Uzbeks and drops the mullah from the minaret.

In fact, everything with the national concept of the name of Islam Karimov is very clear. Just as it is clear why he needed it - in order to build neo-feudalism, it is necessary to close society as far as possible from external influences. And of course - no integration.

Nationalism is the best recipe for the ideological justification of neo-feudalism. Upstairs - Islam Karimov, who tirelessly struggling with the legacy of the occupation. Around him are loyal vassals who received their share of power in exchange for loyalty. And on the ground - the population, which on 90% is quite happening and in every way supports the policy of the party. This or very similar picture of the world is formed in the first person of Independent Uzbekistan.

But Islam Karimov himself understands the risks inherent in the society he built. Thus, speaking at a celebratory meeting on the nineteenth anniversary of the adoption of the Constitution, he urged citizens not to feel nostalgic for the USSR, and young people not to succumb to the propaganda of the Union. “In the near future, forces are being activated in the post-Soviet space, which, taking advantage of the fact that the younger generation does not have a sufficient idea of ​​the recent storiesThey strive to bring nostalgia for the Soviet past through fictions. With all this, forgetting about the totalitarian essence of the Soviet empire, the collapse of which was justified, first of all, by political, economic and ideological inconsistency, ”said Karimov. The question arises - why Karimov is so afraid of Allied nostalgia, if 90% support him and believe in his wise decisions? The answer is obvious.

So, what we have at the exit. The most populous republic of Central Asia over the 20 years of the undivided power of Islam Karimov has turned into an absolutely closed society of the neo-feudal type, where the most active part of the population has been ousted into labor emigration. A state was built where the worst Soviet models remained, such as exit visas or the inability to exchange currency, except for a virtual one. Post-Soviet delights were added to the worst Soviet models, such as forced labor in cotton fields for 20 dollars per month and non-denominated national currency, when citizens go shopping with a bag full of money.

But these are nuances. The main conclusions are that a society, about which we know little, according to indirect data is such an explosive mixture that it will inevitably rupture after the death or resignation of Karimov himself. Neo-feudalism cannot be preserved in the 30 million state, which borders Afghanistan, has territorial and resource claims to Kyrgyzstan and Tajikistan, and is actively arming the United States. The poor sociology of Uzbekistan tells us that the tangle of contradictions woven by Islam Karimov during the construction of a family-type dictatorship (in addition, strictly secular: it’s cool with its own Islamists) will begin to be tackled in the very near future.

And the scenarios that we will see in the coming 3-5 years will be a real test for the CSTO and the future of the Eurasian Union. But the prerequisites for these scenarios will be the following text.

Ctrl Enter
Noticed a mistake Highlight text and press. Ctrl + Enter
We are
What you didn't want to know about EnglandThe sleeping giant of Central Asia
143 comments
Ad