April 5 2013
39
Continuing the theme of pistols with the possibility of automatic fire, try to get acquainted with another sample. weaponsnamely a VP 70 pistol, originally from Germany. The reason for writing an article about this weapon, as with Lecler's gun, became a comment under the article about pistol "Dart"who had the opportunity to conduct automatic fire with a cut-off of three rounds. The VP 70 pistol is somewhat different from the above models, as the pistol itself can only fire with a single fire, but when you attach the butt to it, new possibilities are already opening up. But first things first.

The appearance of the weapon is quite interesting. First of all, the disproportion of the handle and the rest of the pistol catches the eye, it seems that the handle is very thin, and the gun itself is too heavy and large. In fact, all this is not so. The weapon is very comfortable to hold, and the narrowing of the handle is due to the fact that before the shutter release button there is still a part of the frame where the safety button is installed. The button that can be taken as the store eject button is actually the lock button for the release button, while the magazine is fixed by a latch at the bottom of the handle. The release key itself is rather unusual in shape, but it is very convenient when using the weapon with hands protected by gloves. In front of the trigger is the casing-shutter lock. Sights simple, unregulated consist of a pillar and front sight. The shutter casing has rare notches on its sides, which ensure reliable retention when sending the cartridge into the chamber. The most interesting point is that the gun has a plastic frame, but at that time it was up to Glokov, oh, how far. However, this is not the first weapon with a wide use of plastic in the design. The design of the weapon is clearly not enough bolt delay, which immediately catches the eye.

The weapons were made in two versions: in civilian, without the possibility of automatic fire and with the “trimmed” capacity of the casing-bolt, as well as the army, which could conduct automatic fire at the attached butt, and also had a 18 magazine capacity. There is information that there was another option, without the possibility of automatic fire, but with the normal capacity of the store. The weight of the weapon without ammunition was 820 grams. The length of the gun without a butt 204 millimeter, with a butt - 545 millimeters. The length of the barrel weapon is 116 millimeters. Height gun 142 millimeter, thickness 32 millimeter. The gun is powered by 9x19 cartridges.

Despite the fact that the weapon uses relatively powerful ammunition, its automation is focused on the free gate, which is alarming for the reliability of the weapon. In order to eliminate the blow to the breech breech, there is a small damper that softens their interaction during the reverse course of the shutter. The use of a free bolt in the pistols for such ammunition is a very rare case, since such an automation system significantly affects the durability of the weapon.

However, in order to be able to deploy large-scale production of these weapons at any time, it was decided to use just such a system. The trigger mechanism of a piston weapon is only of a double action, that is, compression of the mainspring occurs while the trigger button of the pistol is pressed. A fairly tight trigger key affects the accuracy of firing, however, as noted by those lucky enough to encounter this weapon, there is no problem getting into a person at a distance of 25 meters. The trigger mechanism of the pistol of only double action allowed to abandon the usual system of protection against accidental firing. In principle, it was possible not to introduce any safety devices into the design of the pistol at all, since the tight movement of the release key almost completely eliminates a random shot. However, a button fuse that blocks the release key has been installed. 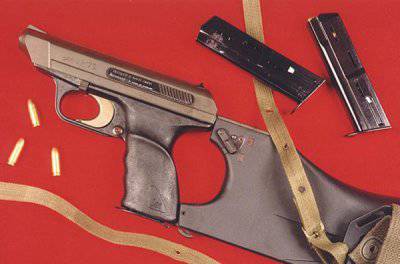 As mentioned above, the gun itself does not have the ability to fire an automatic fire, this option appears when you install the butt to a weapon that has a fire switch with two positions: “single fire” and “automatic fire” with a cut-off of three rounds . Since the weapon shop only has a capacity of 18 cartridges, after the short bursts of 6, the magazine needs to be replaced and this is precisely where the slide lag is clearly lacking. In the end, it was possible to make the store more roomy for automatic fire, but the fact that the shooter’s knees would have fought against him wouldn’t be the first and the last specimen with the magazine sticking out of the handle.

The high rate of fire can be attributed to the positive features of the weapon, about 2200 rounds per minute, of course, that all three rounds will not fall into one point, but the impact of recoil at this rate of fire does not have a significant impact. So if you hold the gun firmly, at a distance of up to 25 meters, all bullets are guaranteed to hit the enemy.

The butt of the weapon serves as a holster. In general, such a gun was created for the purpose of rapid and universal armament of the population with at least some weapon in case of anything. Simple to manufacture, effective at short distances, this pistol would perfectly serve as a temporary weapon until a more effective sample with a greater effective range falls into the hands. Despite this, only about 3200 units of weapons were released, after which production was curtailed in the middle of 1989. This weapon was not widely spread, as well as great fame, although even managed to flash on the screen in the movie "Aliens." As it seems to me, this gun was very late with its appearance, since if it had been created for years on 10-20 before, it would certainly receive the maximum distribution. By the time it was created, the views on the short-barreled weapon were already somewhat different, and even the mass of interesting decisions in the design of the weapon could not bring it forward. Nevertheless, on this gun some solutions were worked out, which later became widespread, such as the plastic frame of the weapon. So the gun was created for nothing and fully justifies its development.

Ctrl Enter
Noticed a mistake Highlight text and press. Ctrl + Enter
We are
Pistols of the Hungarian gunsmith Rudolf von Frommer (part 2)Sharps pistols variants
39 comments
Information
Dear reader, to leave comments on the publication, you must to register.